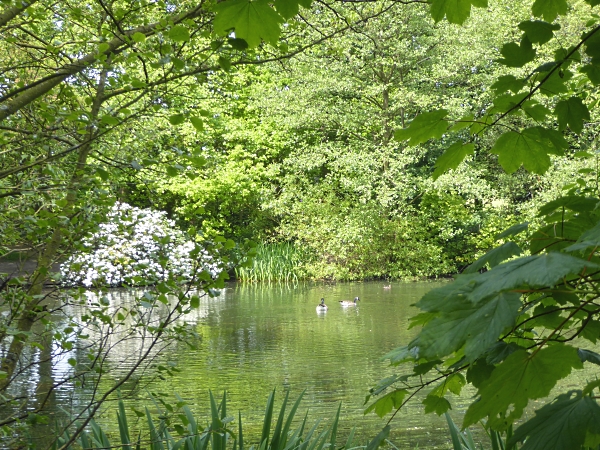 I popped into St John’s Gardens on the way to Lime Street Station to check on a couple of notable trees. The Indian Bean tree, which is always one of the last trees in leaf, has just the first shoots breaking out amongst last year’s dangling bean pods. The Dove Tree / Handkerchief Tree has a few flowers out, with their lovely white hanging bracts, but not very many, sadly. (The two in Calderstones were flowering spectacularly last week.) 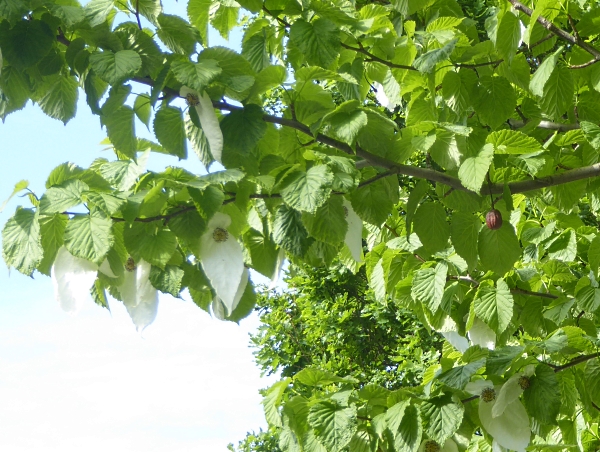 We were last at Sherdley Park on a freezing day last November, so it was good to see it when it was warmer and less muddy!  Behind the fence of Sutton Academy were some Red Horse Chestnut trees (Aesculus × carnea) in flower. It is an artificial hybrid between A. pavia (the American Red Buckeye) and A. hippocastanum (the English Horse Chestnut). 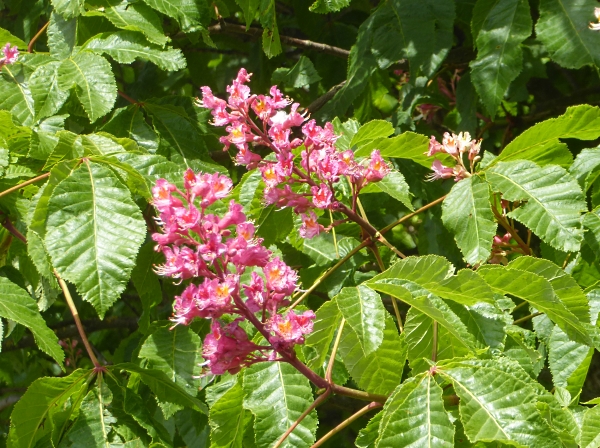 It was a hot and sunny day, so we were glad to walk the shady paths around the pond. There were the usual Mallards and Canada Geese, and a family of four young Coots. The air above the water had a blizzard of insects, but where are the Swallows? They do seem to be late this year. The trees were full of birdsong, and we spotted Mistle Thrush, Treecreeper, Long-tailed Tit and a Carrion Crow. In the autumn the paths are carpeted with fallen Beech leaves, but Beeches also shed vast quantities of unpretentious flowers in the spring, making a second annual carpet. 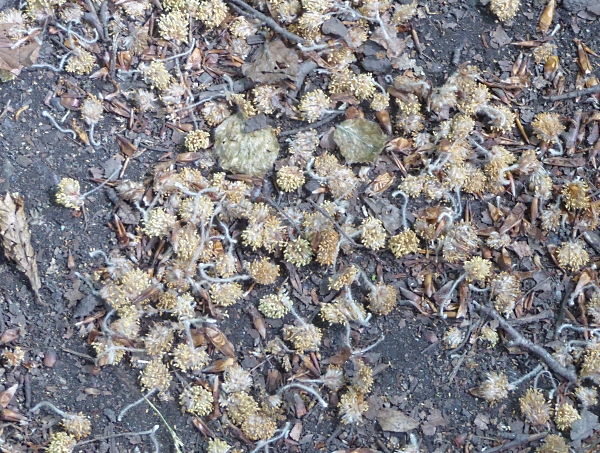 Another tree flowering just now is the familiar Hawthorn or May Blossom. There are also many Hawthorns in gardens with double pink blossom. It’s a different species, the Midland Hawthorn Crataegus laevigata, which has white flowers in the wild, but the pink one is the cultivated variety ‘Paul’s Scarlet’. 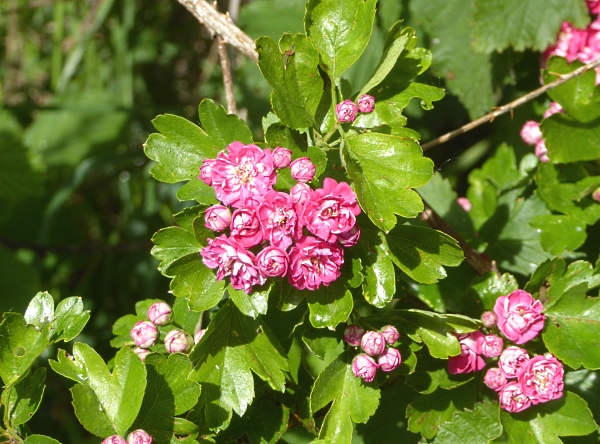 Near the children’s playground is a Swamp Cypress, one of only two I know of in Merseyside parks. There were also plenty of Whitebeam, Rowan and Swedish Whitebeam in flower, and near the entrance to Delph Wood was a magnificent billowy Narrow-leaved Ash on the edge of the path called The Score. We noted all three common species of Oak. The English or Pedunculate Oak has acorns with stalks (“peduncle” is the botanical name for the stalk), while the Sessile Oak has unstalked acorns. Oddly, the leaves are the other way around, so Sessile Oaks have stalked leaves while Pedunculate Oaks have leaves that grow close to the twig. 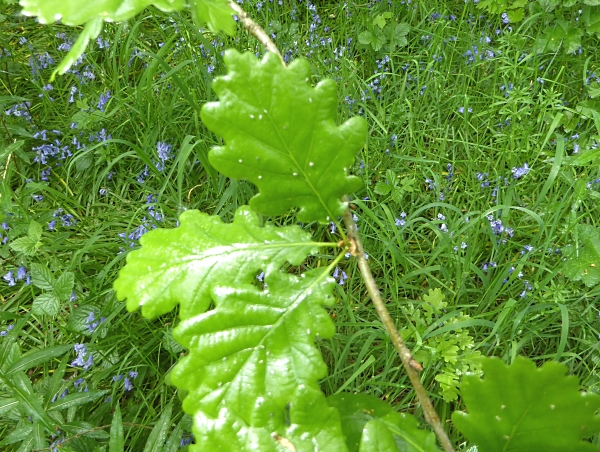 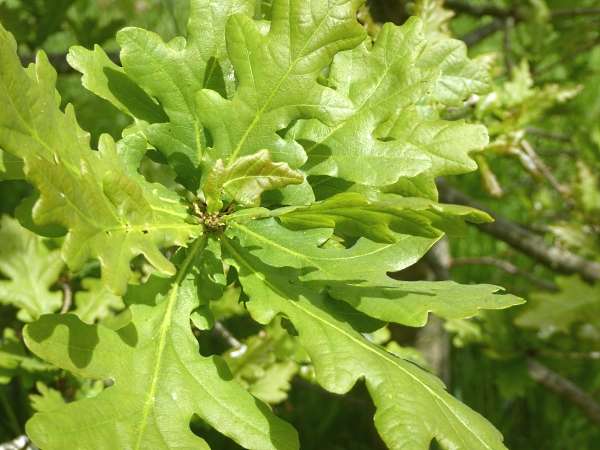 All Oaks have catkins, but they usually grow so high up that we don’t notice them. This Turkey Oak had several low branches and was flowering splendidly. 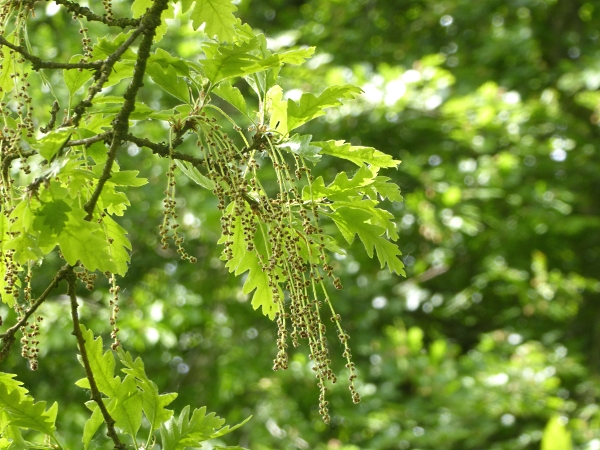 In Delph Wood we noted Specked Wood butterflies and an occasional Orange Tip. The trees are a typical mix of Beech and Hornbeam, Ash and Sycamore, Oak and Horse Chestnut, and lower down there is Hawthorn and Elder. In a damp spot by an open meadow we found a single orchid, still only a bud, but it seemed to be going to be dark purple and not very tall. One of the Marsh Orchids I imagine. Red Campion was popping up everywhere. 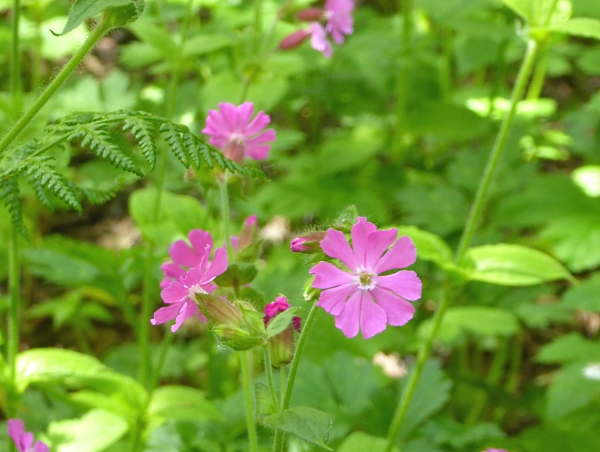 We came specially to look at the Bluebells. There wasn’t a huge carpet of them, but many scattered patches. They appeared to be hybrids, but with a lot of native in them. The flowers mostly drooped to one side and had curled-back petals and white pollen, which all suggests native Bluebells. 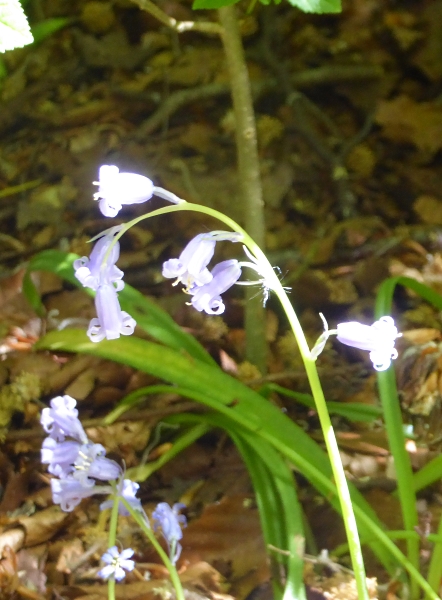 However, they weren’t deep blue, but rather pale.  Other patches were clearly Spanish, with upright stalks and flowers all around. 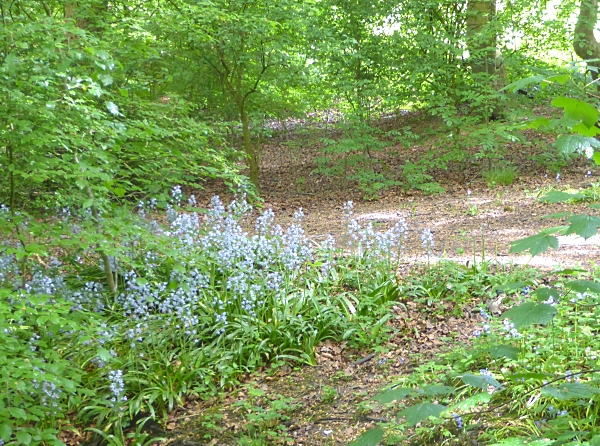 Just to note that there is a Wildflower Identification training day on Wednesday 6th June, on the  Liverpool Loop Line near Sainsbury’s on East Prescot Road. Organised by Sustrans and led by Lancashire Wildlife Trust’s senior ranger John Lamb. It’s free but you need to register.

Public transport details: Train from Lime Street towards Wilmslow, supposed to be at 10.30 but delayed by Arriva Northern until 10.48 because there was no guard. Arrived Lea Green 11.13. Returned on the train from Lea Green at 14.01, arriving Lime Street 14.28.