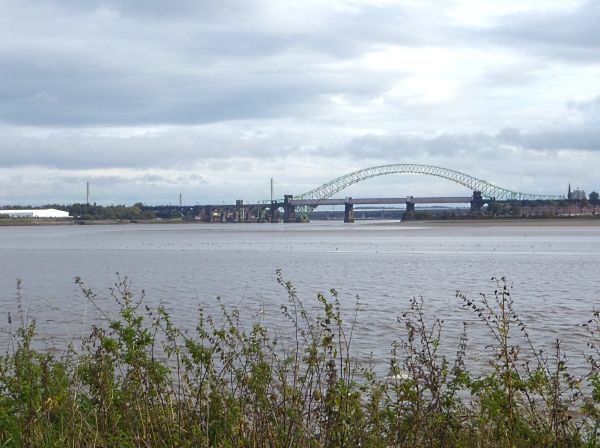 Pickerings Pasture, on the Mersey estuary near the Widnes-Runcorn bridge, is the site of the old Widnes tip which was reclaimed in the 1980s and declared a Local Nature Reserve in 1992. The Mersey Estuary is a Site of Special Scientific Interest (SSSI) and a Ramsar site. It is internationally important for Dunlin, Turnstone, Black-tailed Godwit, Redshank, Teal, Pintail and Shelduck.  Improved water quality in the Mersey has led to over 50 species of fish being found in recent years, encouraging fishing birds like Cormorant, Heron and Great Crested Grebe. It is also occasionally visited by Common and Atlantic Grey Seal, Harbour Porpoises and once each of Minke and Killer Whales. We saw nothing as exciting as that today, sadly.

It was a couple of hours after high tide, and the sandbanks were emerging from the river, holding only Black-headed Gulls, Herring Gulls, a few Lesser Black-backed Gulls and a Cormorant drying its wings. 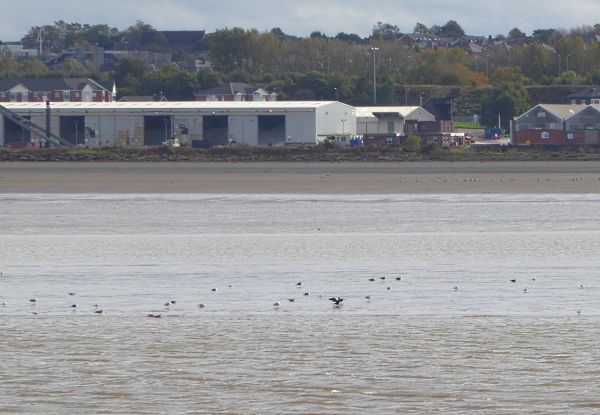 It was still warm for the time of year, muggy and damp, with threat of rain later. We had seen lots of autumn colour from the bus on the way, especially in the ornamental roadside trees in Estuary Business Park, but Pickerings Pasture was still almost completely green. We made our way along to the bird hide at the southern point for lunch, despite the wind blowing fiercely through the viewing ports. There was nothing out there but Cormorants and Mallards, with a few Shelduck on the field. 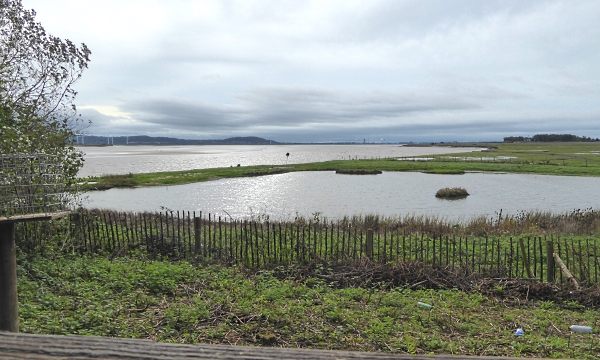 We had hoped for some woodland birds on the feeders there, but they are all broken and empty. The bird table outside the hide was empty, too. The MNA makes a regular donation towards the cost of bird food here, and the “thank-you” sign is still up, but we weren’t getting our money’s worth today! 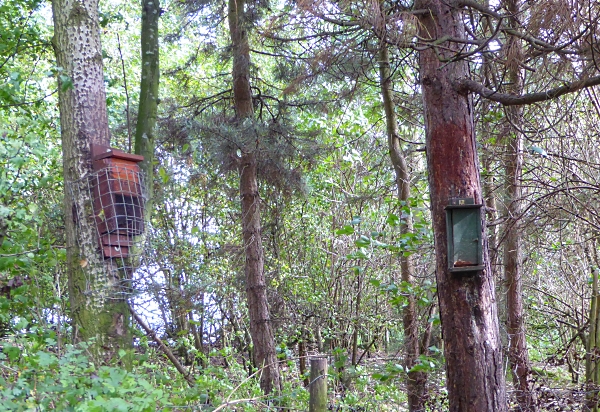 When they reclaimed the tip they planted wildlife-friendly native species such as Oak, Ash, Alder, Birch, Willow. Aspen, Larch and Scots Pine, with an underplanting of Sea and Alder Buckthorn, Field Maple, Elder and Dogwood. Other species have either arrived naturally or been planted since then. There are some Spindle trees on either side of the path to the hide, and although they never make big trees, we thought these were quite small, spindly things, perhaps not thriving in the shade. We were happy to see the Aspens, though, one of the few remaining tree species on our I-Spy list, worth 20 points and taking us to 1200. The ones on the side of the path by the hide were blowing wildly in the strong wind, but the tree by the Control Meadow was more sheltered, and the leaves were fluttering beautifully on their long red-brown stalks. They reminded me of the line in Tennyson’s The Lady of Shalott -“Willows whiten, aspens quiver, little breezes dusk and shiver …” 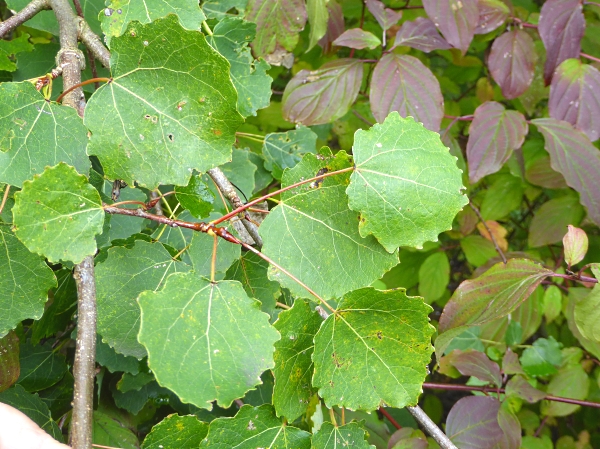 Also by the path side were these lovely smoky purple leaves, which I think belong to the Grey Dogwood Cornus sanguinea. 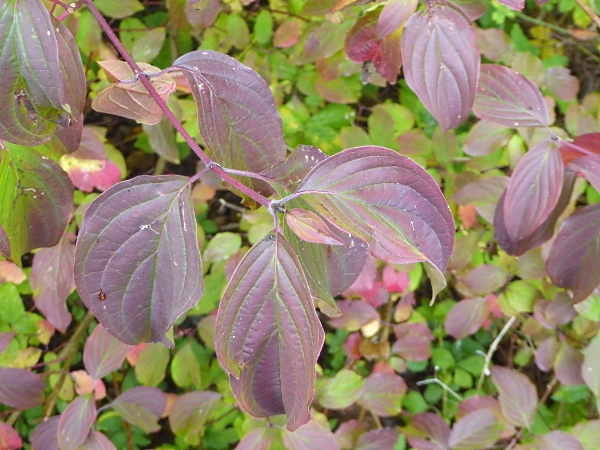 There were big white mushrooms in the wood, and one fence had a sign showing that Pickerings Pasture are now also getting donations from Tesco. Do they still need our regular donation? 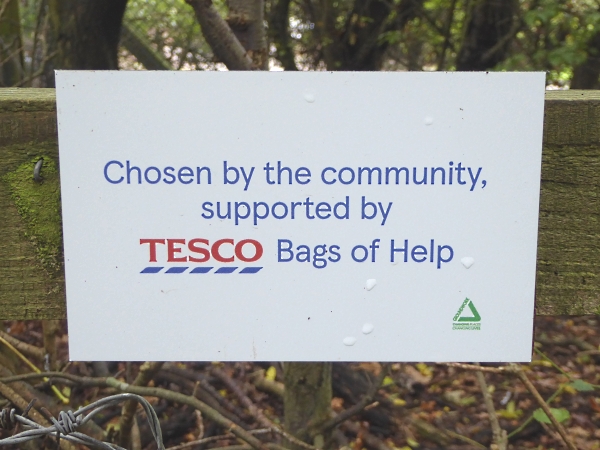 The flowers in the meadows had nearly all finished, but we spotted a late Small Scabious Scabiosa columbaria. No points for that, though. The old seed heads were very attractive to Goldfinches, and a charm of over 100 birds was lifting and falling, then twittering prettily whenever they returned to the surrounding trees. 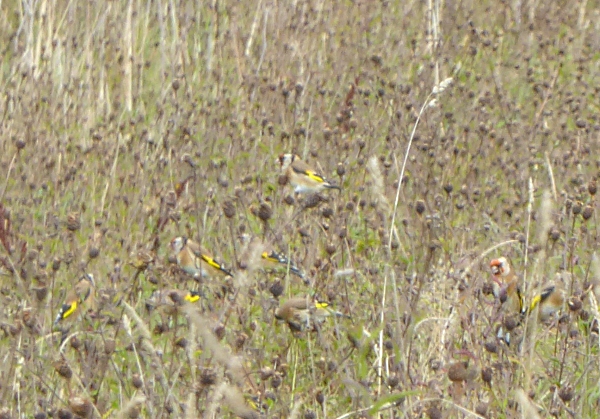 The Alders bore their unripe cones and the Hazels were showing next year’s catkins, but there are never any nuts where there are squirrels. 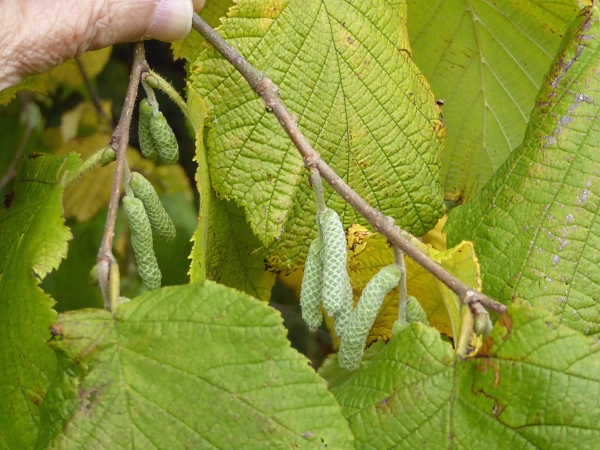 The only autumn colours were the Lime trees near the exit, dropping gold and yellow leaves. 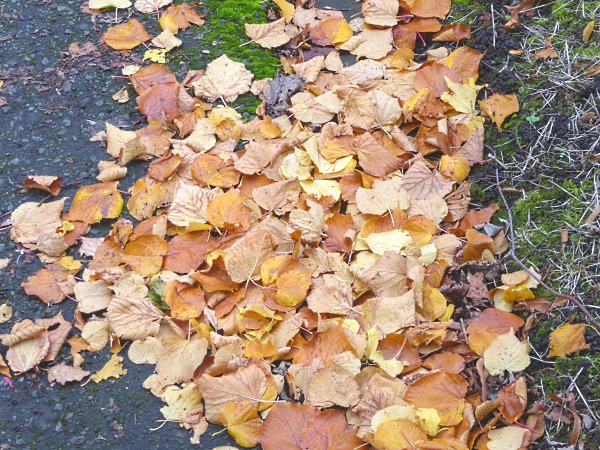