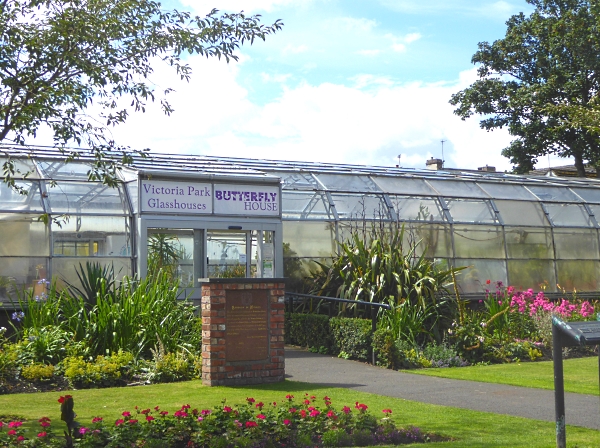 The Park lake had great numbers of birds, but no unexpected species – just Mallard, with the moulting males and females now almost indistinguishable; Canada Geese and a few Greylag Geese; many Black-headed Gulls, now starting to moult out their black heads; a handful of Mute Swans, none apparently with rings, and no cygnets from this year; just a few Coots and one or two Moorhens. This young Moorhen was sitting calmly on the walkway next to the reeds. 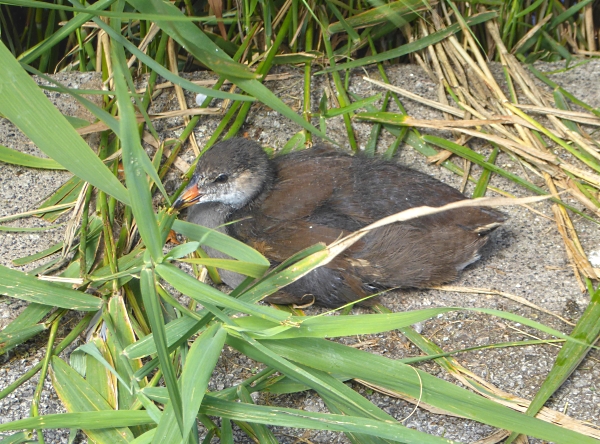 In the Woodland Walk we noticed that the bat hibernaculum was still standing and that there were bat boxes on the trees. We spotted just one more wild flower for our list, Lords and Ladies, although it was berries, of course, rather than the flower. 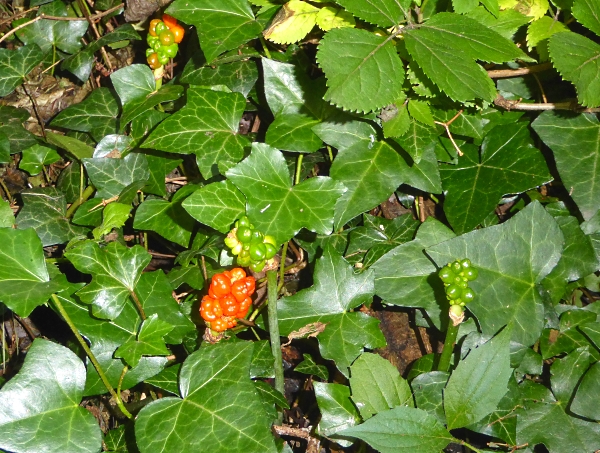 We ate our sandwiches in Appleton gardens, with beds of cultivated flowers like the tall Acanthus mollis, known as Bear’s Britches, and a scattering of Primulas, which were way out of their normal flowering time. A wild patch had some splendid poppies and a poor, raggedy bird-pecked Speckled Wood. 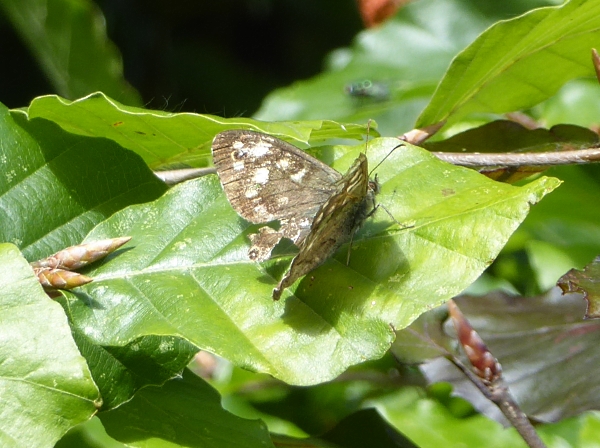 There were some Lime trees with no twiggy sprouts at their bases so were they Small-leaved? They had the tufts of brown hairs at the bases of the leaves, which is said to be diagnostic, but the little seeds, supposed to be hairless in Small-leaved Limes, were definitely fuzzy. Drat!  The leaves were sprouting nail galls, which occur on all Limes, so that was no help either. 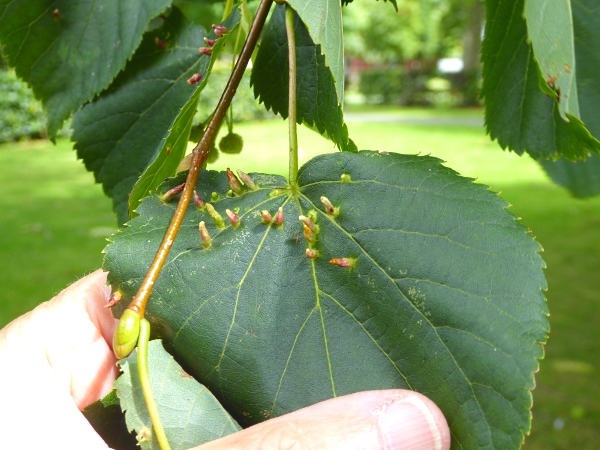 Then we went into the Butterfly House, where exotic species fly about freely. The rangers who supervise it aren’t always sure what species they have, as they buy a job lot and see what they get!  The ID pictures on the wall definitely didn’t cover everything that was there. But there were the usual Blue Morphos, which hardly ever sit still, and when they do they fold up their wings to show off their eye-spots. 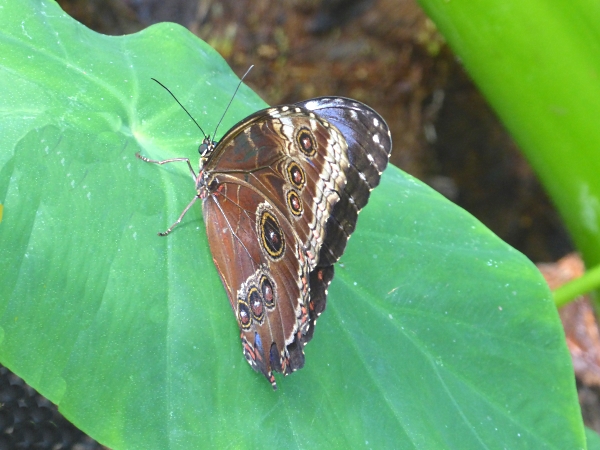 This one is a Chequered Swallowtail Papilio demoleus, whose caterpillars look like bird droppings. It is widespread from the Middle East to the Far East and is considered invasive in Australia. 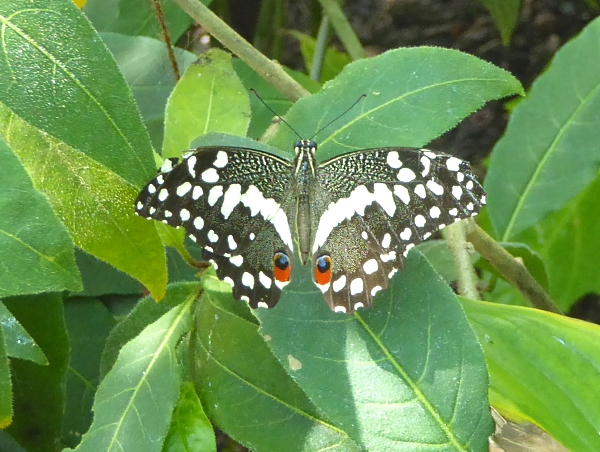 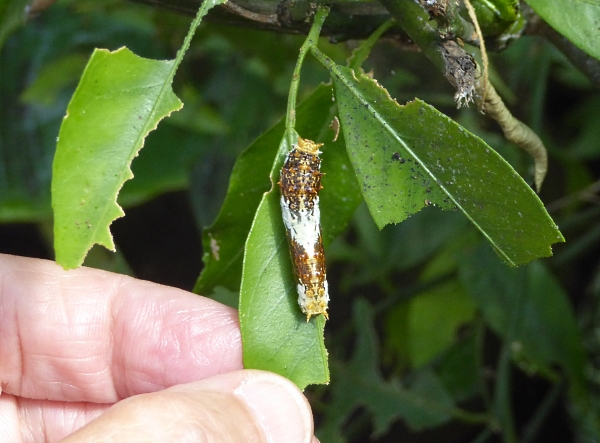 This one is The Blue Clipper Parthenos sylvia subsp. lilacinus, which comes from Malaysia. 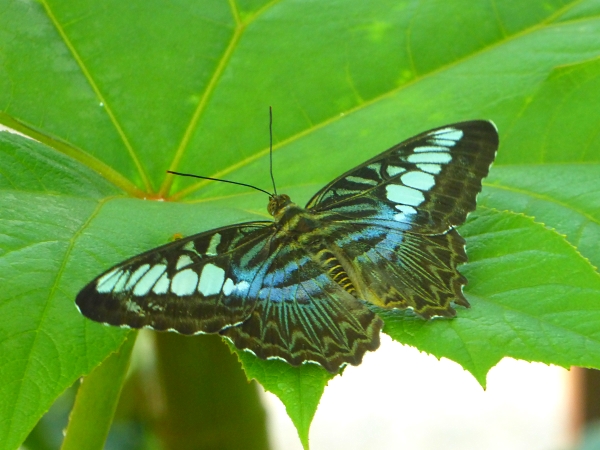 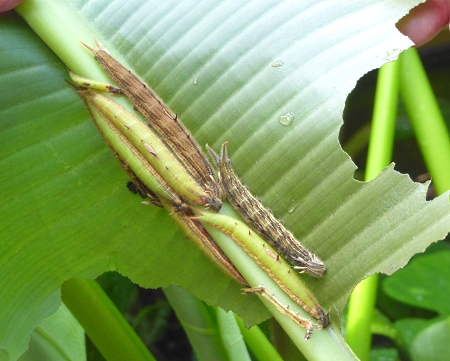 They have to keep the Butterfly House very hot, so by the time the perspiration started running out of my hair and dripping off my nose, I had to make a break for the outside. Gosh it was hot in there! On a bank of pink cultivated Meadow Cranesbill we watched a White butterfly flit from flower to flower, and after some debate we decided that it was probably a Large White. 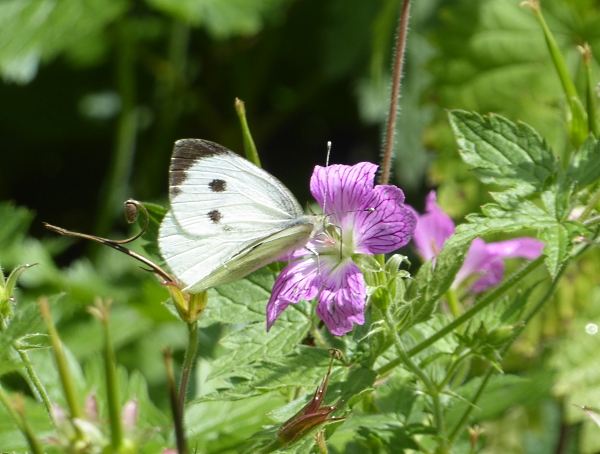 Near the station we were amazed to see a very late-blooming Magnolia in a garden, and on the road we found another cluster of mating bumble bees. There appeared to be three of them this time – a female Red-tailed, a male of the same species in the wrong position, and an interloping male of another species which looks to be getting the best of the deal (but not from an evolutionary perspective, of course). 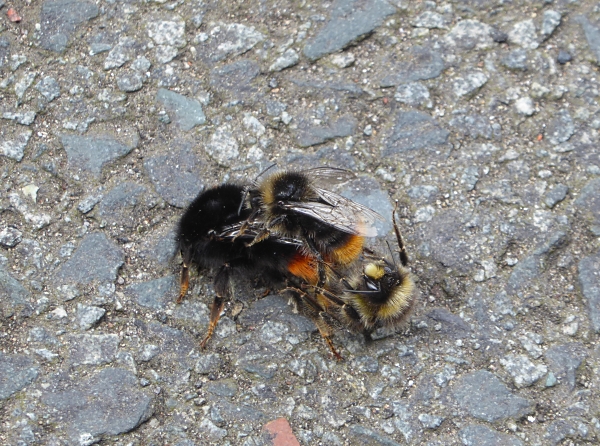 No new trees or birds today, but the Lords and Ladies got us 15 points and we correctly answered the question on last week’s Foxglove (What part of the body does the medicine derived from Foxglove treat? The heart.) So we are up to 895.

Public transport details: Train from Lime Street at 10.26, arriving Widnes 10.58. (This is one stop outside the Merseytravel area, so we had to buy return tickets from Hough Green to Widnes.) Returned from Widnes at 14.17 (delayed to 14.26).