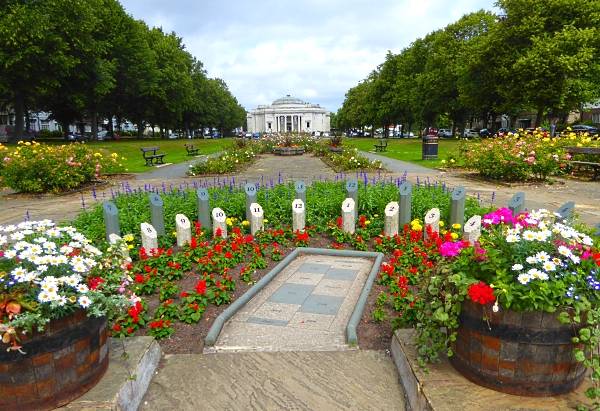 We started with a quick look at the site of the explosion on Boundary Road in March this year, which injured 33 people and also destroyed a dance studio. The houses and shops around it are still fenced off and boarded up. 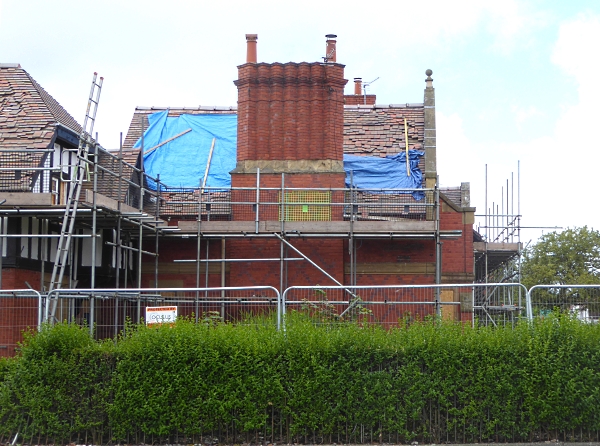 North of the Port Sunlight Museum there is an open field on which they have recently planted some interesting young trees, including a Sweet Gum Liquidambar styraciflua, a Tree of Heaven Ailanthus altissima and this one with yellow-green pinnate leaves which has us baffled. It looks the same as the one at Queen Square, in the corner next to the New Look shop. We guess it’s some new variety of Locust (Robinia) or Honey Locust (Gleditsia) but I can’t find it in any of my tree books. 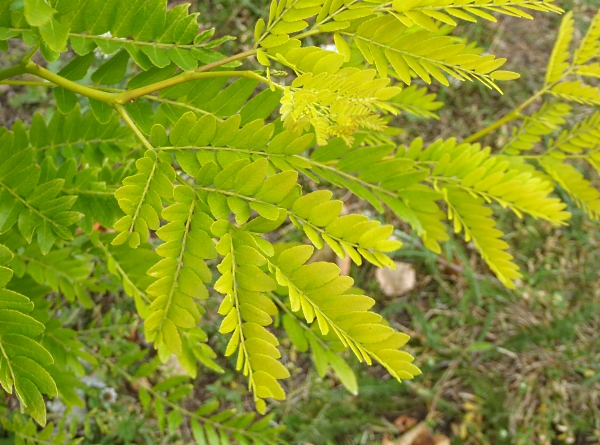 They have a splendid “hanging basket tree” there, though! 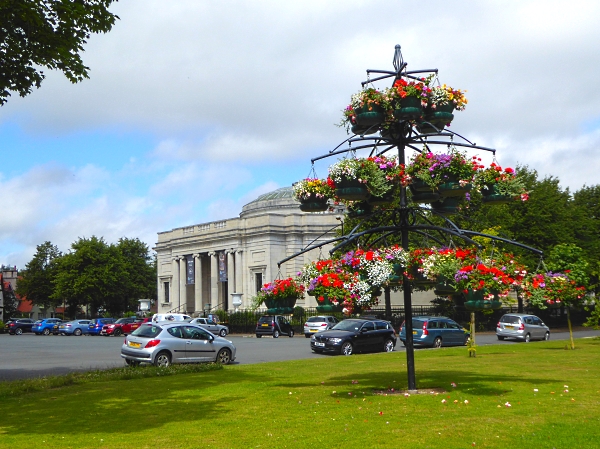 When the sun came out we spotted a very fast-moving Dragonfly over the fountain pond and we stopped to admire the annelematic sundial, where your own shadow forms the gnomon. (See top picture.)  At the back of the garden centre, behind the sheds for sale is their Indian Bean tree with its hanging pods. (Worth 25 tree points) 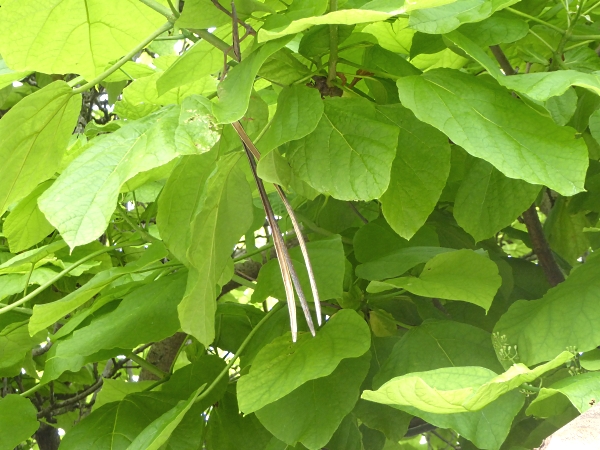 On either side of the garden centre doorway were two bamboo-ish plants in huge pots. To our surprise the name tag said they were Frangula alnus variety ‘Fine Line’. That’s Alder Buckthorn! They didn’t look anything like the wild Alder Buckthorn, because they were quite tall (fastigiate) with spotted bark and finely-cut leaves. I wonder if they would also act as a food plant for Brimstone butterflies? 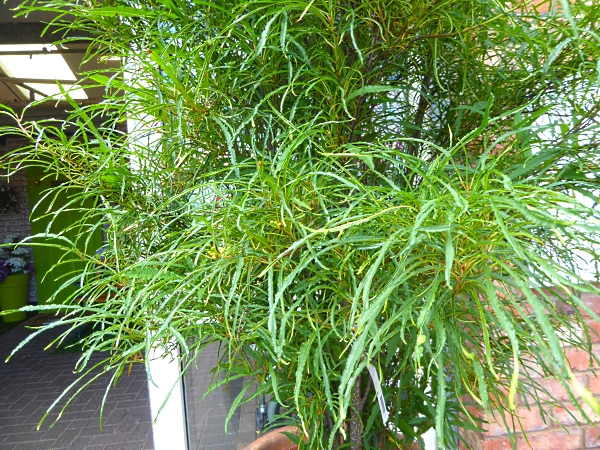 Port Sunlight was full of marvellous flower beds, and the bowling greens were mowed to perfection, but the roses in the Rose Garden were in dire need of dead-heading.  In the Dell where we ate our lunch, we renewed our acquaintance with some old favourite trees, the Honey Locust with the long thorns on the trunk, the young, rare Antarctic Beech Nothofagus antarctica, the Swamp Cypress and the two Tulip trees, one of which had a low-growing flower for us to inspect at close quarters.  Then we headed back north to the New Ferry Butterfly Park. 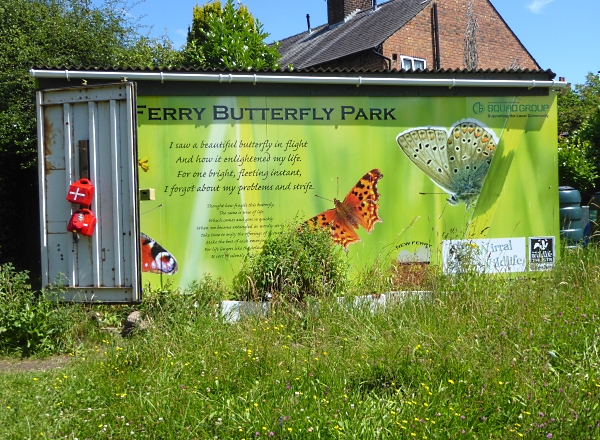 Several groups of kids were pond-dipping under the supervision of rangers from the Wirral and Cheshire Wildlife Trusts. 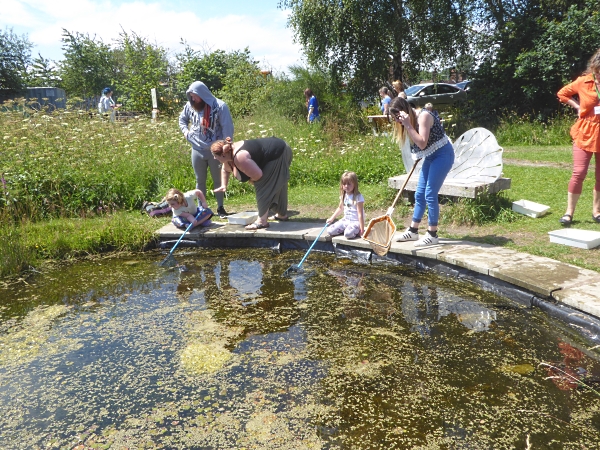 Their top find was a group of  three Smooth Newts in their tray and there were plenty more in the pond. They were smaller than I expected, about three or four inches long (10cm) including the tail. 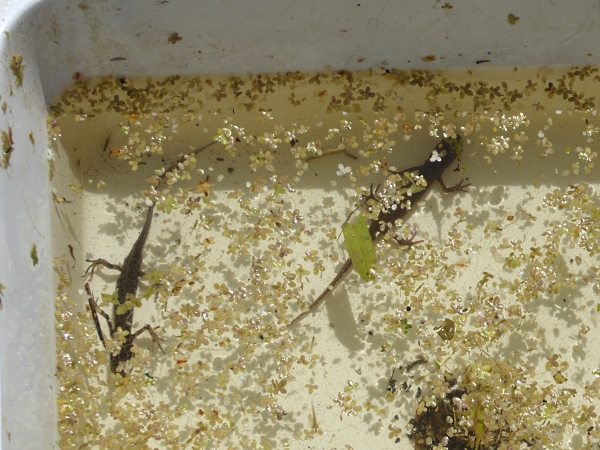 Both Common Blue and Blue-tailed Damselflies were flitting about. This is a Common Blue. 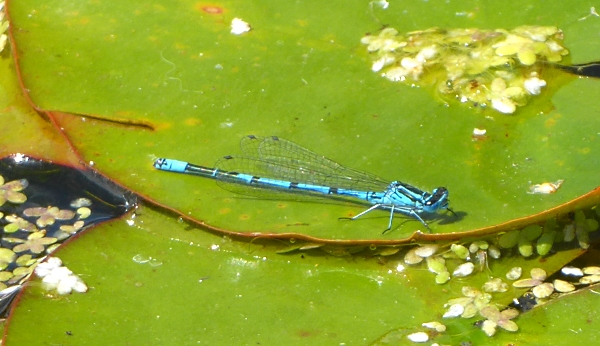 The  butterfly park has really come on since it was founded some years ago. We noted Comma, Green-veined White, Speckled Wood, Meadow Brown, Small Skipper and Gatekeeper. They have White-letter Hairstreaks here too, but we didn’t see any. The wild flowers were growing profusely, and we made great progress with our I-Spy list, including Wild Carrot, Tufted Vetch, Red Clover, Hemp Agrimony, Purple Loosestrife, Musk Mallow, Arrowhead leaves, Small Scabious, Wild Teasel, Scarlet Pimpernel. Some of the Selfheal was very tall, perhaps 12 inches (30cm) and we wondered if it was really Betony, but the leaves didn’t have scalloped margins, so it was Selfheal. There was one tall, mauve, cylindrical orchid in the long grass, and they also have Bee Orchids here, but they were all long gone. We should visit in June next year. 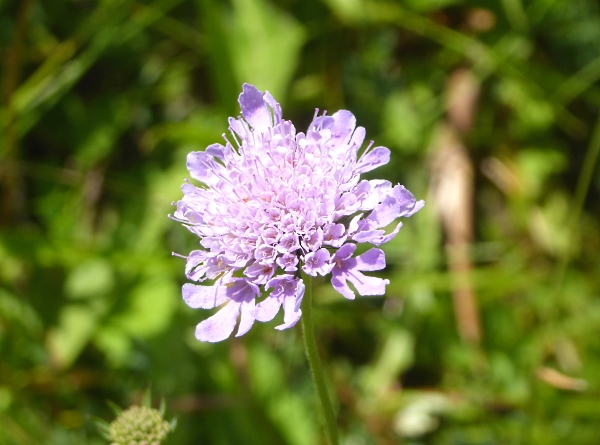 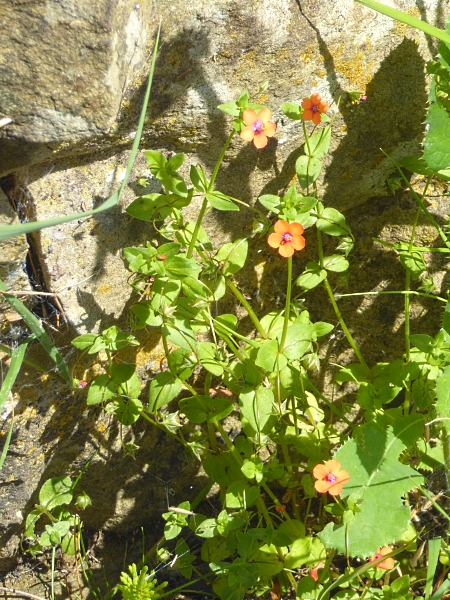 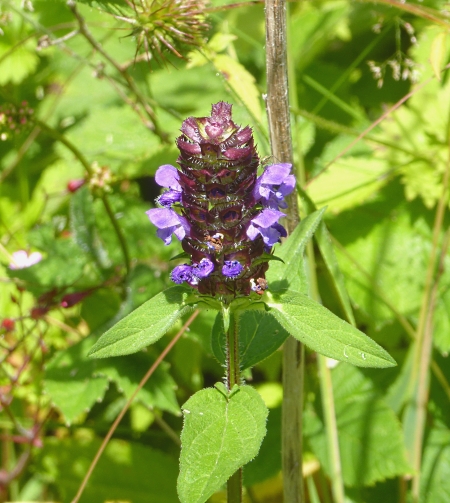 The only notable birds were the Swifts flying high overhead. They will be returning to Africa soon. Other signs of the end of summer were the first blackberries ripening at the tips of the shoots, red rose hips, berries of Guelder Rose turning, white immature Hazel nuts in the hedge, and a good display of bright red Rowan berries. 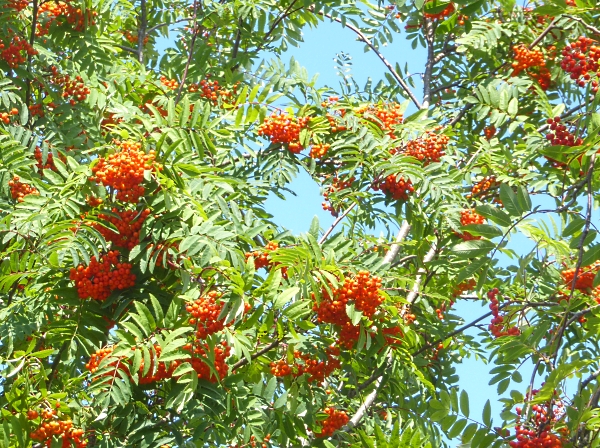 We were keen to find some of the last odds and bods from out tree list. We asked the ranger, rather jokingly, if she had any English Elm, and she mentioned the Exeter Elm at Flaybrick and said there’s a Huntington Elm near Brimstage and Thornton Hough. To our surprise she said some older English Elms, which should be all dead, are suckering. One patch is near Claremont farm by the Clatterbridge roundabout and the other is at the bottom end of Rivacre Valley by the visitors’ centre, near the motorway. We might try looking for them!  We also asked her about Wayfaring Tree, but she knew of none locally: they are all in the south of England on chalk. She took us to two of our targets, though, a Spindle Tree and a Common/Purging Buckthorn Rhamnus cathartica. 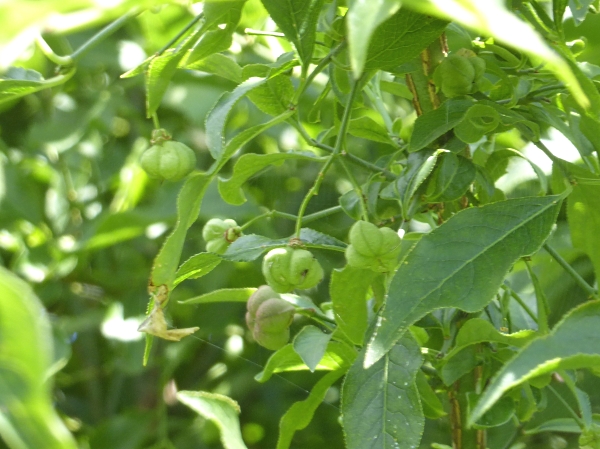 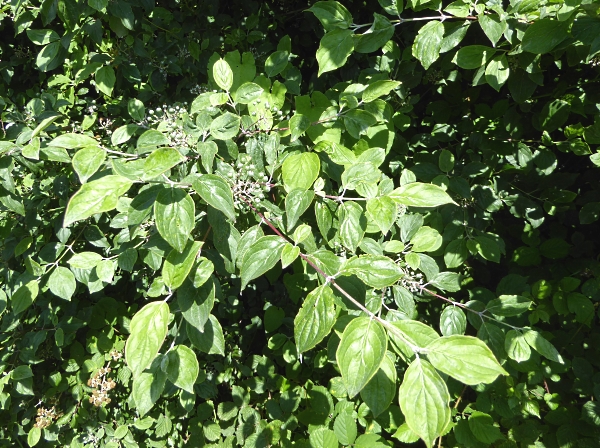 It was our best day this year for flowers, so we are up to 770 points. Three new trees, now up to 1110, but we are stalled on birds, with no new ones for several weeks.