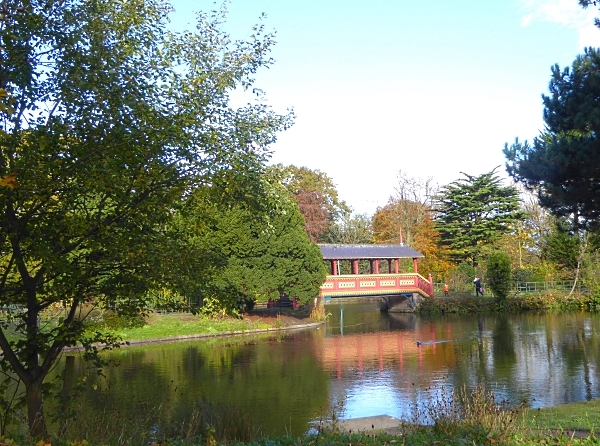 It felt very wintry, with a brisk north wind. Time for extra layers and gloves! Some trees are still full of green leaves, like Hornbeam and Willow; the Rowans still have leaves, which are mostly red; the Cherry leaves are nearly all down, with just a few red ones clinging on; the Norway Maples and Planes still have about half their leaves, which are green and yellow. The Gingkoes in Williamson Square, which were all planted together several years ago, are now very different sizes, while two have yellow leaves, three are still green, and one has no leaves at all !

The first tree that impressed me in Birkenhead Park was a massive Turkey Oak by the play area. Is it one of the original plantings? The Park opened in April 1847, so this tree might now be approaching 170 years old. 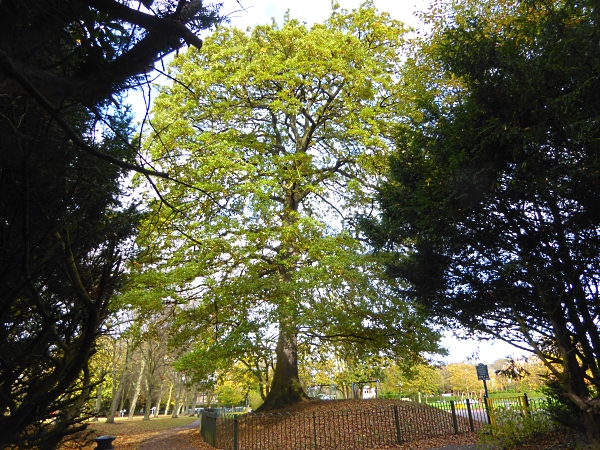 At the north end of the Lower Lake, near the rockery, an otherwise unexciting-looking small tree was shedding massive leaves, bigger than my hand, about 8 inches by 4 inches (20 x 9 cm). It’s a Cucumber Tree Magnolia acuminata. It will produce bright pink or red “cucumber” fruits in early autumn, so perhaps we’ll check it next year. 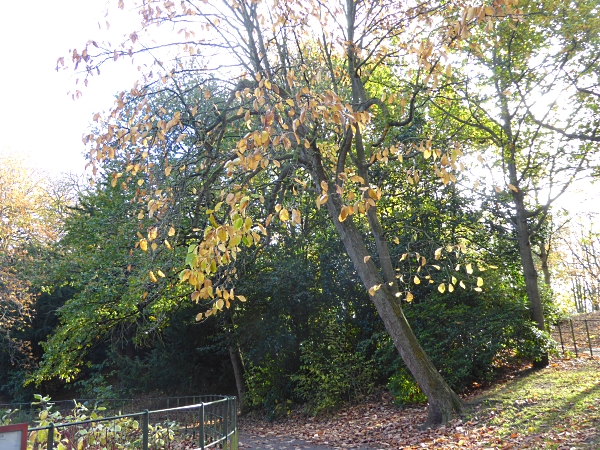 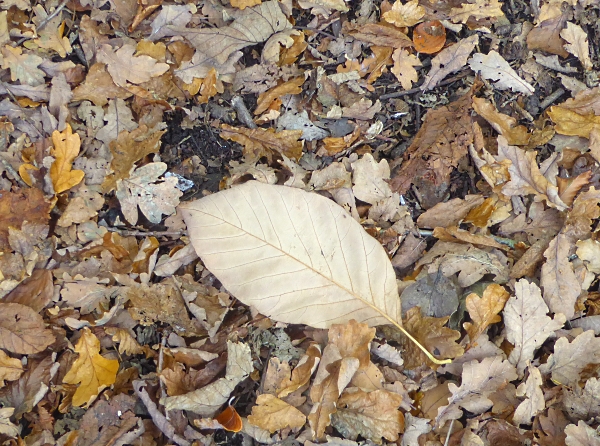 Also at that end of the Lower Lake is a young Scarlet Oak Quercus coccinea, with far better colour than Red Oak. 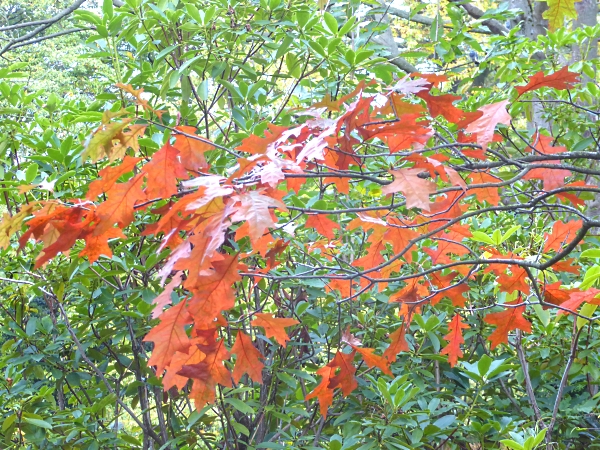 The lake itself offered Pigeons, Mallards, a Coot, and a Wren hopping about in a low Weeping Willow. We didn’t see the two odd black Mallards, which have more than a hint of some very tall and thin variety in their ancestry. But further on there was a Mistle Thrush, and lots of the ubiquitous Magpies. A Jay few though the woods. The strange weeping Camperdown Elm looks like it’s dead. There are just a few leaves on the lower branches but most of the upper twigs are dry and snapping off. Another Elm bites the dust. 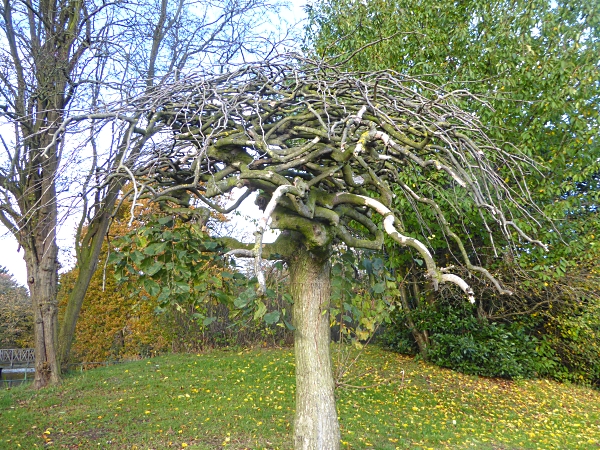 There are hordes of Grey Squirrels in the park. One looked very hopeful when I rustled a bag of bird food, but when he came up and sniffed it on my hand, he turned away in disappointment. As he turned we saw he had only half his tail. 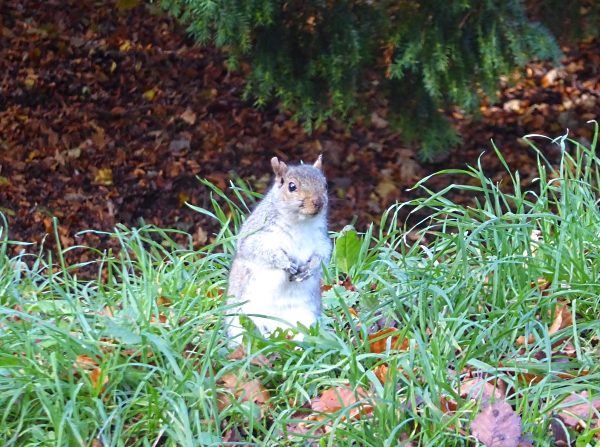 A big old Beech trunk has been left to decay, and there were two Nuthatches on it, hunting in the crevices of the dying bark and prising bits off. 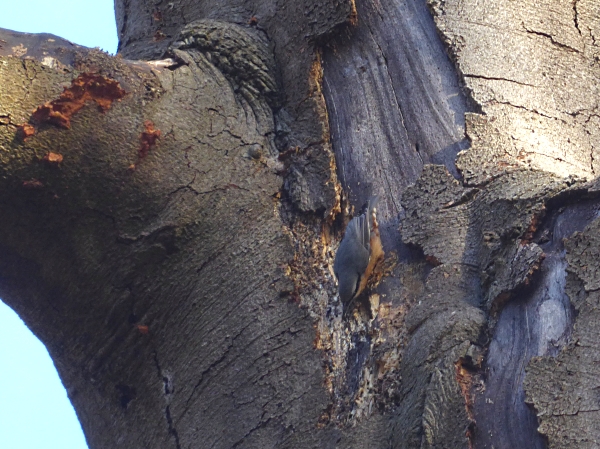 At lunch time I bought a booklet from the Visitors’ Centre (£2) called Unusual Trees of Birkenhead Park. It’s an A4 glossy booklet, 12 pages, describing 11 trees, one page each, and a map. Some of the featured trees aren’t that unusual (Holm Oak, Deodar, Common Lime, London Plane) but it includes an English Oak thought to be older than the Park. “Dating from the 1760s, this magnificent tree was probably part of a field boundary when the surrounding land was all pasture.” We didn’t go to find it (one for next time) but we set off to see three featured trees in the Upper Park.

There was a pair of Tufted Duck on the Upper Lake, some Canada Geese and two Muscovy Ducks. We also spotted the two missing tall black Mallards, now five years old, and looking very different to their unhybridised relatives. 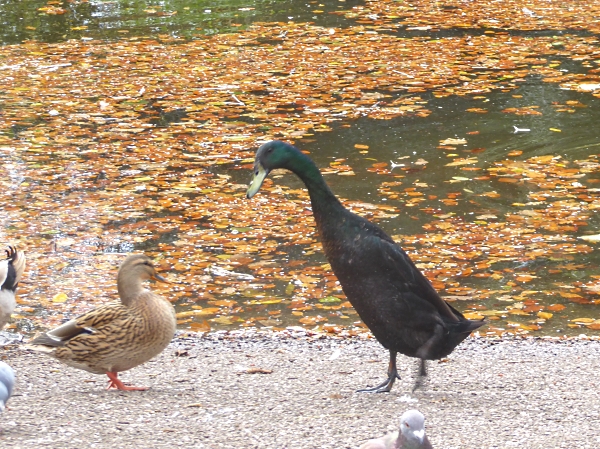 One of the rare trees was a Strawberry Tree Arbutus unedo. It’s an evergreen, and the red fruits were all gone, but the green and white flowers, which come out in October and November, were plentiful. 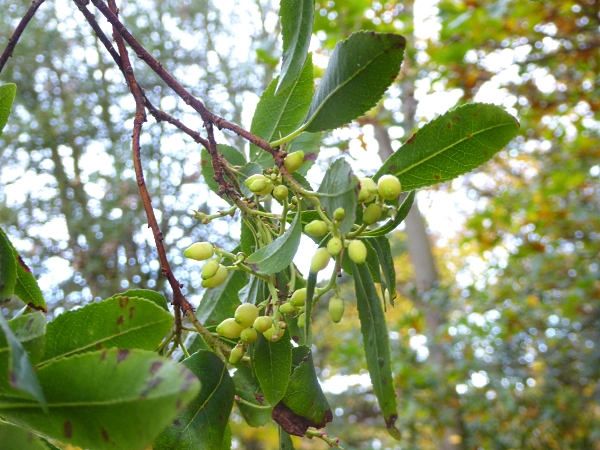 A Heron posed obligingly on the opposite fishing ledge, framed by autumn foliage. 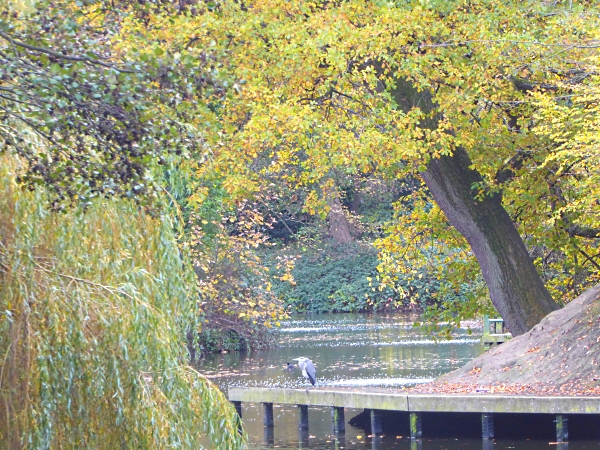 Just past the north end of the Upper Lake I spotted lots of fallen leaves with scalloped edges and thought “Aspen”, but the tree that was shedding them was far too big, with a huge ridged trunk. I think it was a Grey Poplar, Populus canescens, which is thought to have arisen as a hybrid of the Aspen and the White Poplar. 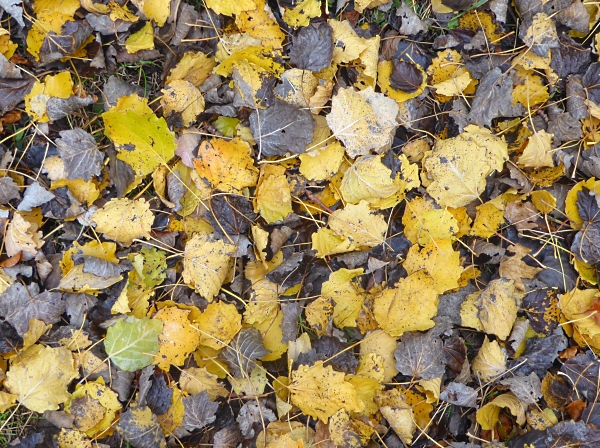 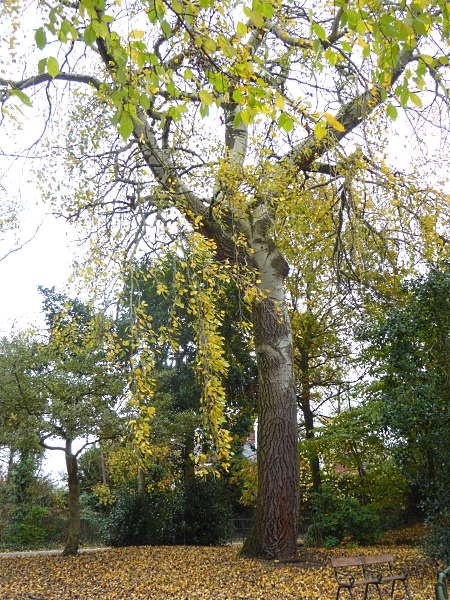 The leaflet also recommended a clump of Myrobalan Plum or Cherry Plum of the red variety Prunus cerasifera ‘Pissardii’. They are on the far side of the big field, near Park Road West. They are probably best in summer, with good light. Although they still bore plenty of dark purple leaves, they just looked dull in November. Far better was a young Maple tree with very bright red leaves in what appeared to be a nursery area, with several other young Maples of different varieties. 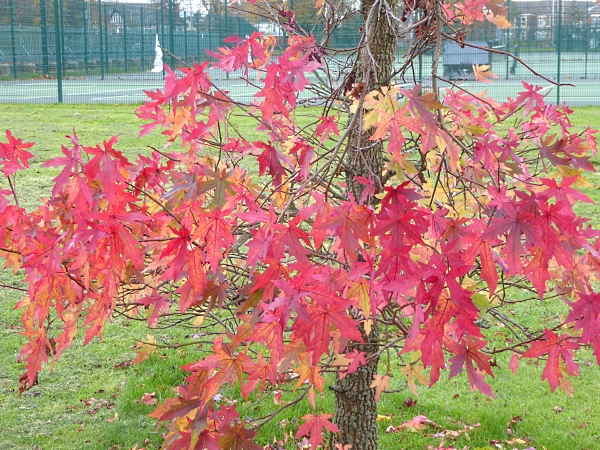 Our last rare tree of the day was a clump of four Hybrid Strawberry trees Arbutus x andrachnoides by the exit gate opposite Duke Street, near the station. It’s a natural cross between the Irish and Grecian Strawberry trees and is another evergreen. Its main feature is the bright red peeling bark. Both Strawberries are related to the Madrona. 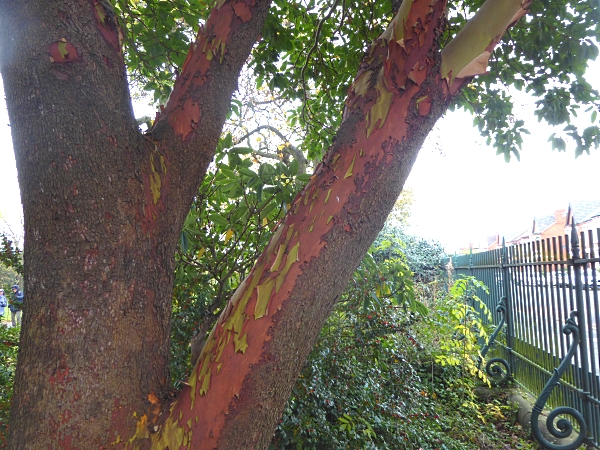