The tide was out at Parkgate, and on the marsh were two Little Egrets, a young Heron, two Mute Swans and very many Black-headed Gulls. There are House Martins nesting on Mostyn Square.  We walked up to the Old Baths and lunched on the picnic tables there, sheltering under a tree from a  short but heavy shower. Then up to the Wirral Way, noting Buttercups, Ragwort and Greater Willowherb. There was a Buzzard calling, flying over the farmhouse by the steps down to the Wirral Way. 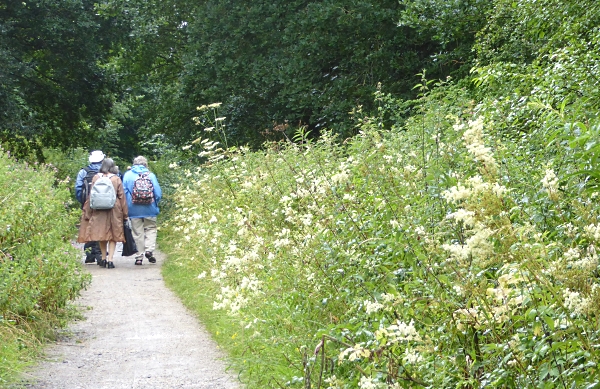 There was a mass of tangled greenery on each side of the path, including great swathes of Meadow Sweet. Lots of Ragwort, all immaculate, with never a Cinnabar moth caterpillar to be seen all day. Tall Stinging Nettles, Yellow Loosetrife, Convolvulus, Yarrow, White Dead-nettle, Rosebay Willowherb, Herb Robert, Black Horehound, White Clover, Hogweed, Wild Carrot, a Snowberry bush with its little pink flowers, Hemp Agrimony just coming out, Burdock and the bright orange-red berries of Lords and Ladies Arum maculatum, also known as Cuckoo Pint or Wild Arum. 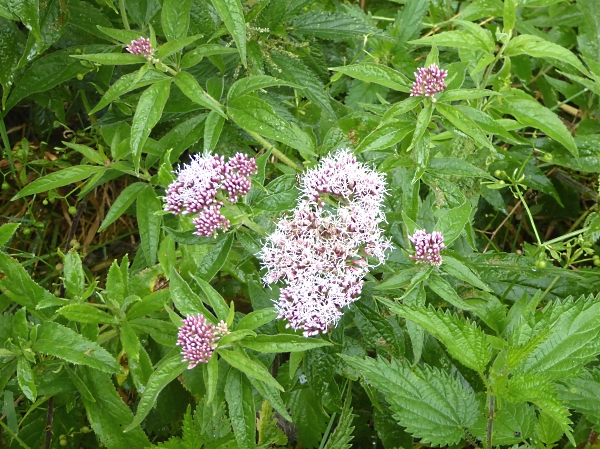 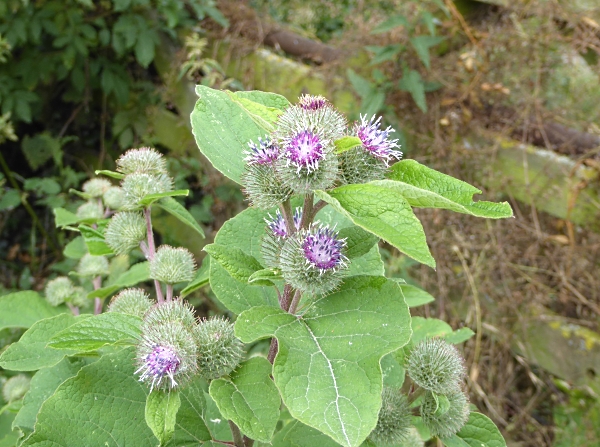 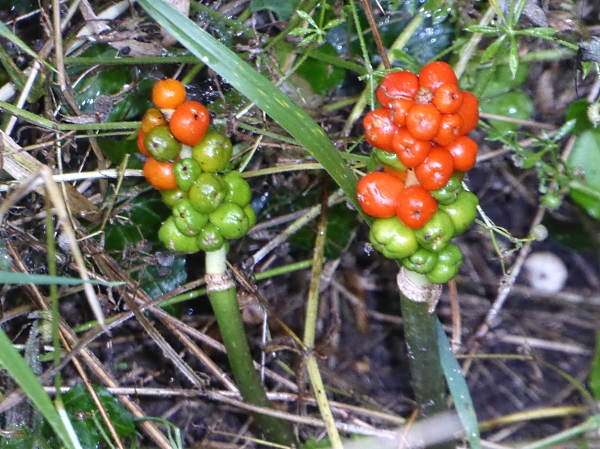 It was overcast, so the only butterfly out and about was a Speckled Wood, and during the whole of today’s walk I spotted just one tiny patch of the Horse Chestnut leaf miner. 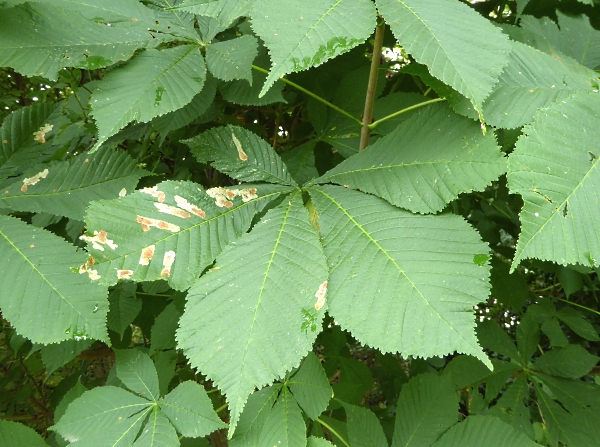 Near the crossing of Station Road there is a new car park with steps up to it. Nearby is an old wartime pillbox, its gun slits bearing on the road, ready to attack any German tanks coming up from Parkgate. 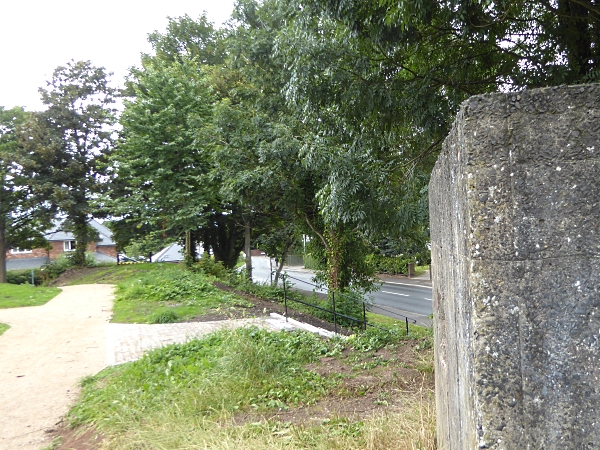 Several autumn fruits are coming on, and it isn’t even August. There were green Hawthorn berries,  wild Raspberries, unripe Damsons, Rose Hips and some ripening Blackberries. 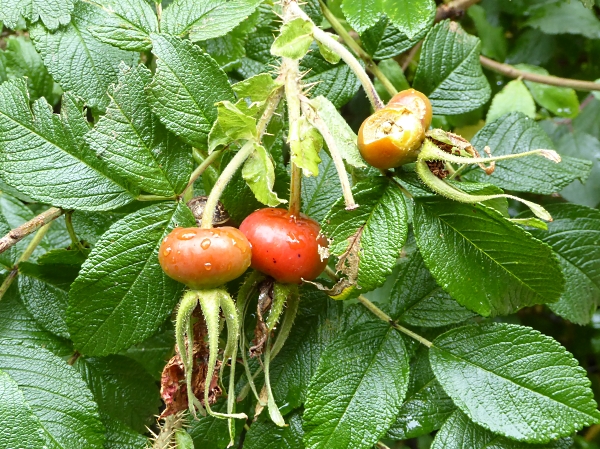 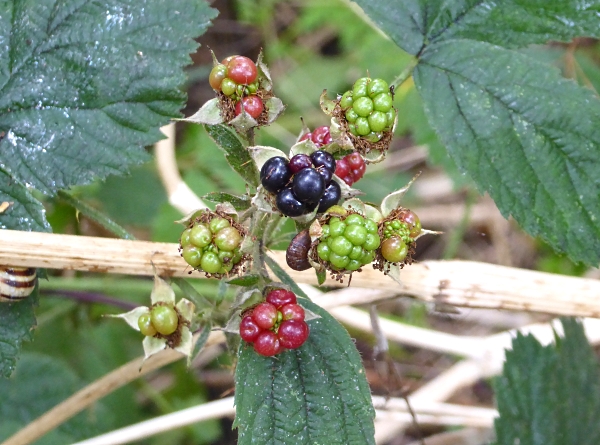 Near Neston a big old hollow Ash had fallen, spreading three broken-off branches in different directions. Locals said it had been down for a week. 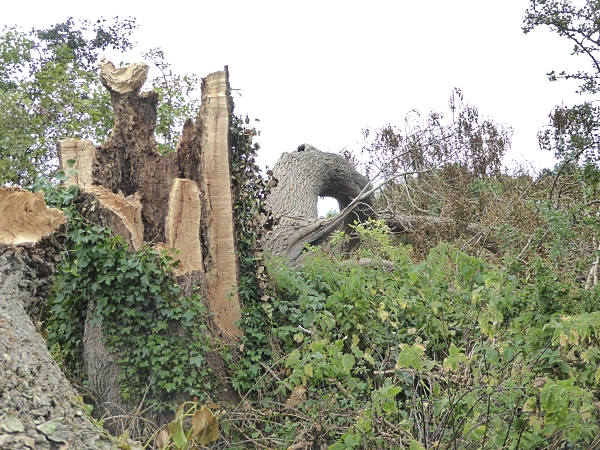 There’s a great view over to Moel Fammau from there.

We turned off into Church Lane, and up through the graveyard of the lovely sandstone church of St Mary and St Helen (1874, Grade II*). 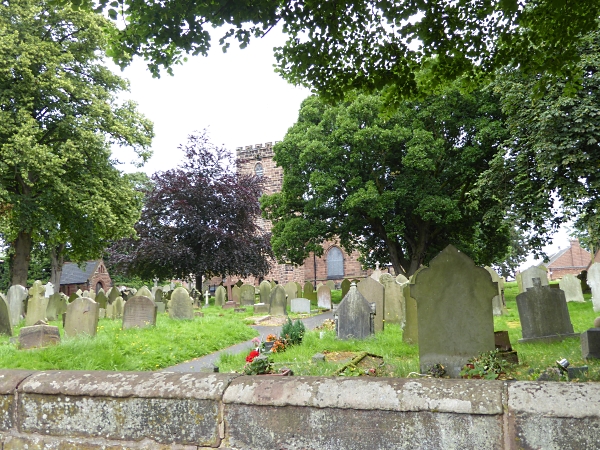 And just to note, before we set out this morning I checked St John’s Gardens, and the Indian Bean trees are now in copious blossom. 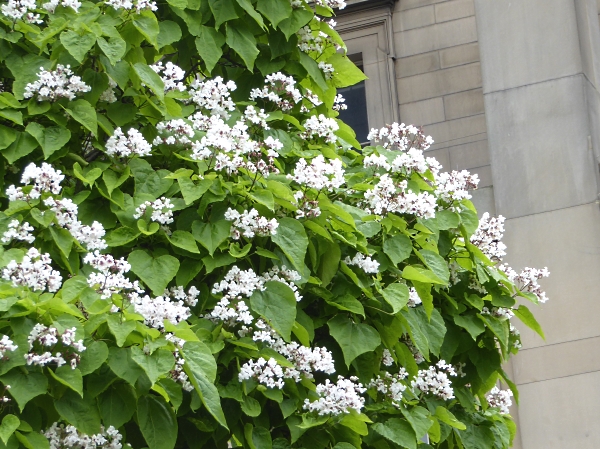