For this sixth section of the Trans-Pennine Trail we had a gloriously sunny day, 12 degrees when we started out (that’s 54 degrees in old money), but getting much warmer in the sunshine during the day.  Our first birds were spotted in Queen Square before we got our bus. Eight or ten geese flew over in a V-formation, flying northwards. In Maghull we walked down Rosslyn Road and re-joined the TPT at Old Racecourse Road. A Robin was singing eagerly on a garden tree. At the end of Meadway a footpath leads to Sefton Meadows. On some Flowering Currant bushes there were lots of ladybirds sunning themselves. Most were orange with black spots, but one was black with red spots. I think they were all Harlequins. 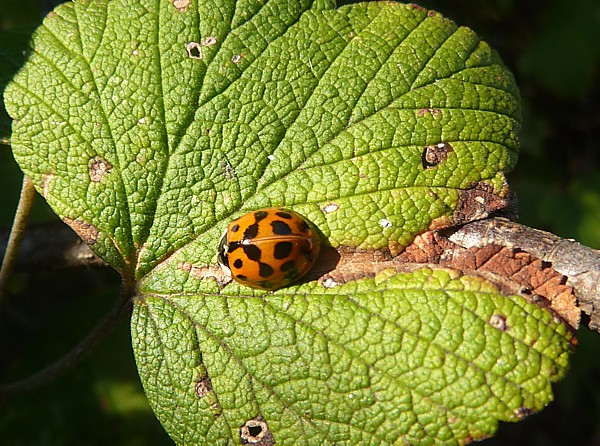 Flowers in bloom were Himalayan Balsam, Ragwort, Hogweed, White Dead-nettle, and today’s mystery plant – this yellow-flowered one with a cluster of flowers and seed-heads atop a very stout stem, with shiny, prickly leaves like a thistle. Perhaps it had been cut off at the top and was re-sprouting. My best guess is Smooth Hawksbeard, which is common, has shiny leaves, lives on path-sides and flowers to December. (Added 1st November – I made a bad guess.  Patricia Ann tells me it was really a Rough Sow Thistle  Sonchus asper, and adds kindly that they sometimes grow a bit oddly at this late time of year. Thanks Pat!) 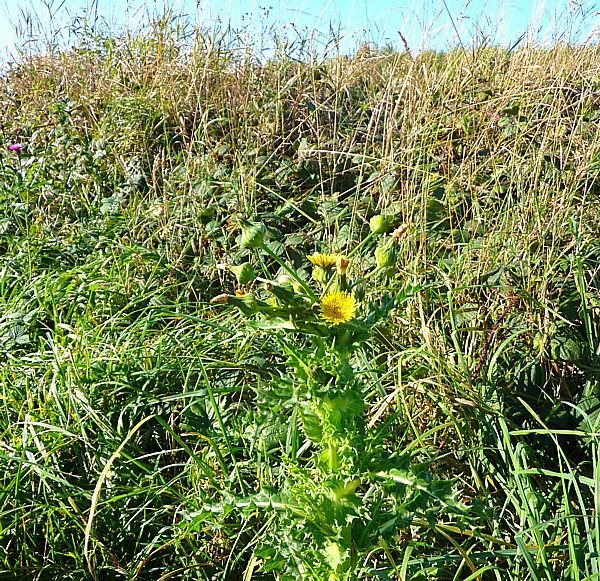 Jackdaws and a Pheasant were calling and there were flocks of Rooks from the Maghull rookery flying overhead. After the bridge onto Chapel Lane there was a signpost pointing right saying “Jubilee Woods”, which we must investigate another time. Pathside trees included one bearing bright red apples and a White Poplar with its top leaves catching the sun. 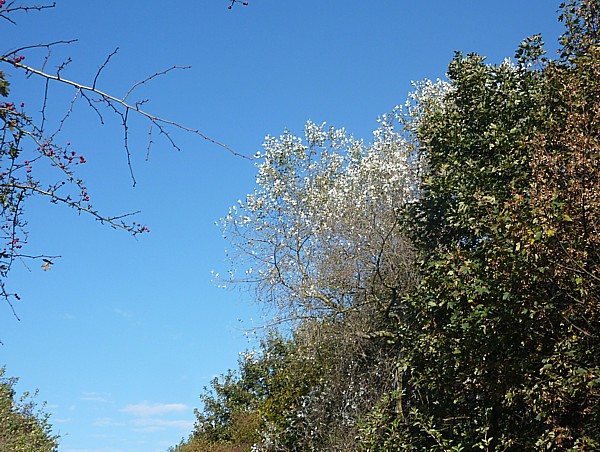 We lunched at a broken-down picnic table, surrounded by empty beer bottles and crisp packets. Then over Mill Dam Bridge crossing the River Alt and onto Chapel Lane, across the flat fields between Switch Island and Sefton Church. A Buzzard was calling but we couldn’t see it. Two Red Admirals were flying over fields and a Grey Wagtail flew up from Moor Hey Brook.  The Hawthorn berries are very abundant this year. 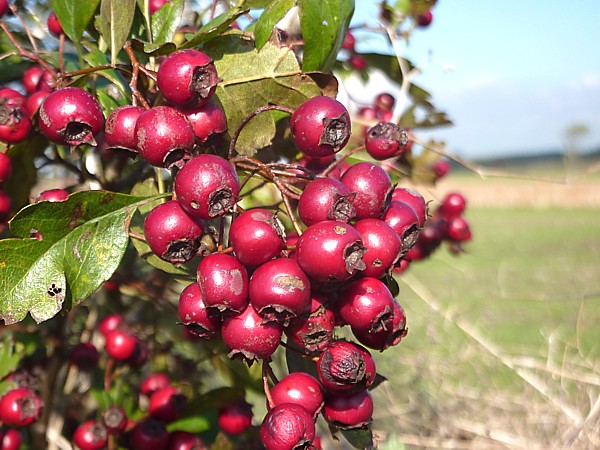 We paused where the road crossed the line of the new Broom’s Cross Road. We won’t be able to stand in that spot next year!  The first picture below looks south towards Switch Island and the second looks northwards towards Thornton, with Sefton Church on the horizon. The works appear to have been flooded by the recent heavy rains. 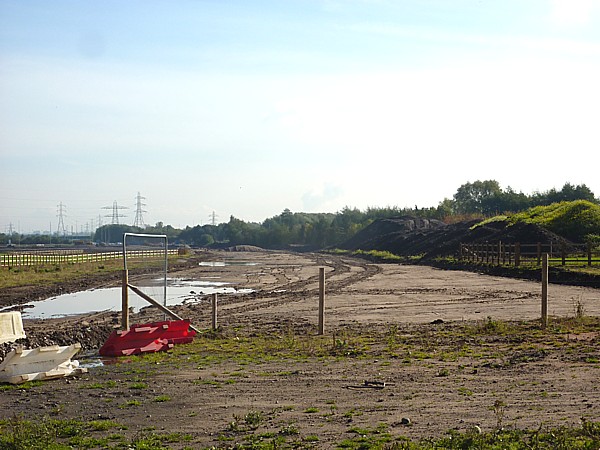 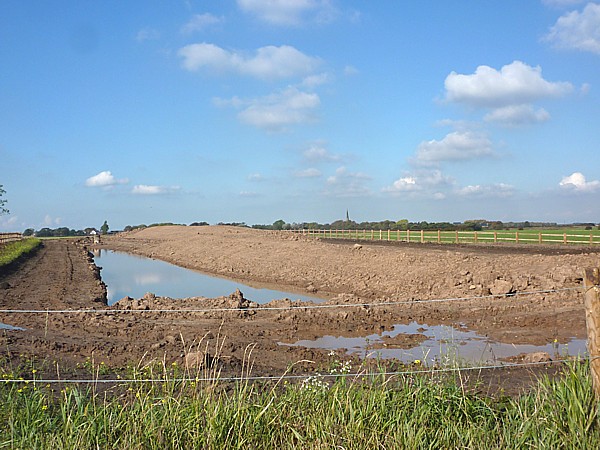 We crossed Northern Perimeter Road into Netherton, where there are three roads named for the moon landings. Aldrin’s Lane (after the astronaut Buzz Aldrin), Lunar Drive and Apollo Way (after the title of the manned space programme). Then we turned onto the canal. The Mallard drakes are now in their full breeding plumage after their moult. Also the usual Coots and Moorhens. Ivy was in  flower all along the fences, full of insects. This one is the Drone Fly Eristalis tenex, I think. 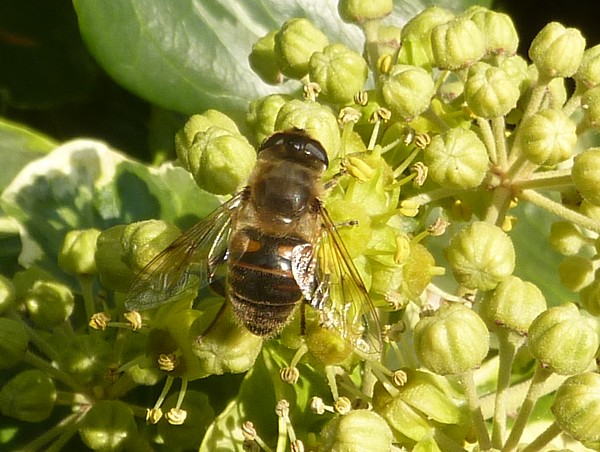 Other signs of autumn included the red leaves of either Virginia Creeper or Russian Vine (which are very hard to tell apart) and Golden Cotoneaster berries, probably of the variety “Rosthchildianus” . 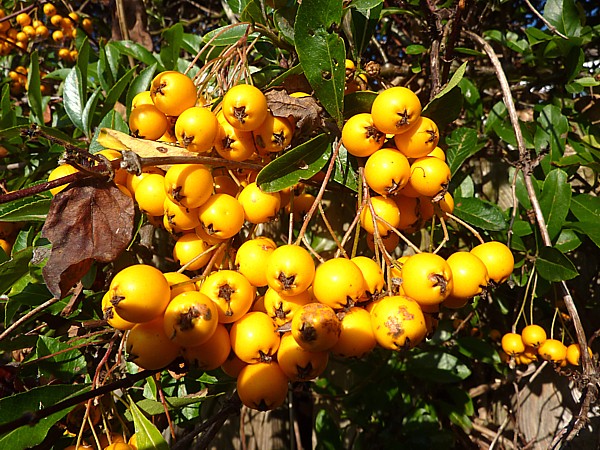 There were lots of Red Admirals about today. We saw two flying over the fields and at least six along the canal on the Ivy. 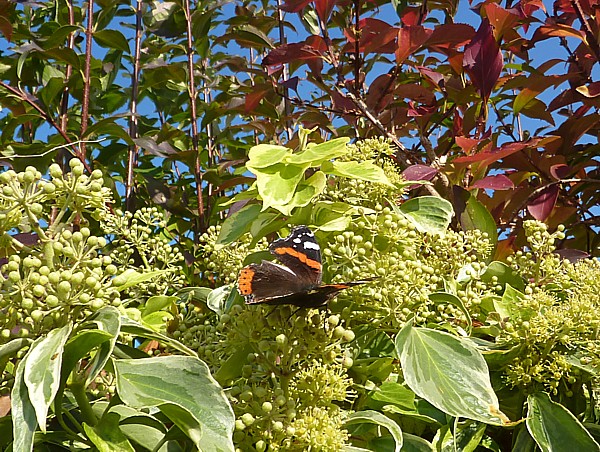 As we approached Old Roan we admired the great row of Poplar trees on the far side. 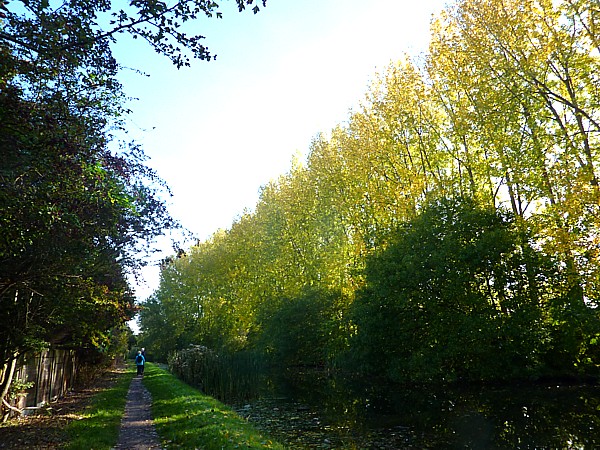 Today we walked two and a half miles of the Trans-Pennine Trail, taking us to 14.5 miles from Southport.

Public Transport details: 300 bus from Queen Square at 10.18, arriving Liverpool Road/Rosslyn Road Maghull just after 11. Some of us returned on the 1.58 train from Old Roan to Liverpool, while others got the 55 bus outside the station at 2.06, heading for connections at Bootle Bus Station.