It was very hot and sunny, and we were happy to be in woodland shade for nearly all of our walk today. 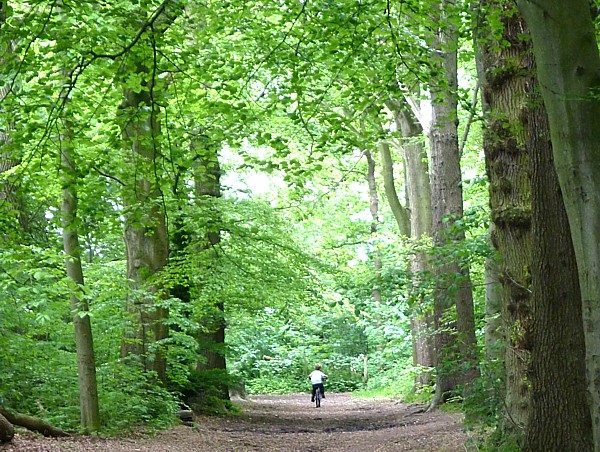 Our first birds were Swifts in Claughton, spotted from the bus. When we got off we turned straight into Upton Meadows Millennium wood, run by the Woodland Trust, which follows the Arrowe Brook northwards. The waysides were full of Hawthorn, Cow Parsley, Green Alkanet, Red Campion, Garlic Mustard, Buttercups, Goose grass, Nettles and an odd clump of Three-cornered Leek. 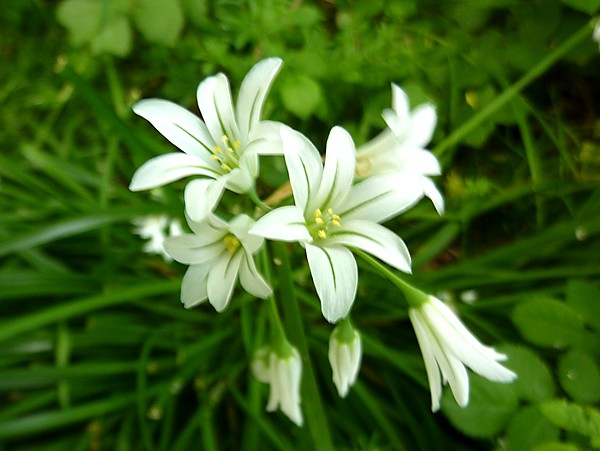 This tree with long sprays of white flowers puzzled us for a while. The leaves and bark looked like cherry but the blossom was different. It was Bird Cherry. 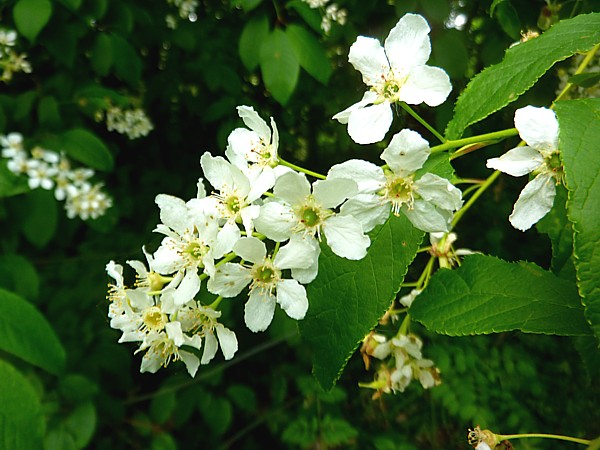 While we were looking at some young oak leaves to determine which oak it was (and we still don’t know) we spotted some whitish spheres growing from the leaves. We assumed they were young Marble galls, but I later found they were Oak Currant Galls. According to Trees for Life they are caused by the same Gall wasp that makes spangle galls. “The tiny disc-like spangle galls are abundant on the undersides of oak leaves in the autumn. The galls drop to the forest floor, where the grubs develop over winter under the cover of fallen oak leaves. In the spring an all-female generation emerges. These are ‘agamic’, meaning that they are able to reproduce without mating. They lay their eggs in oak buds, producing Currant Galls on the catkins and leaves. The sexual generation of male and female wasps emerge from the Currant Galls in June, mate, and then lay their eggs on the undersides of the leaves. Spangle galls develop, and so the cycle continues.”

Some years ago we saw a nesting Kingfisher along the Arrowe Brook, but not today. Just the songs of Blackbird, Wren and Robin. There was a clump of yellow Welsh Poppies, a pair of Speckled Wood butterflies dancing in patch of sunshine, and a large Rat which peeped out from behind a bit of corrugated iron sheeting on the far bank.  We crossed Arrowe Brook Road into Arrowe Park Country Park and continued along the Arrowe Brook. There is a magnificent weeping beech at that entrance. On the fishing lake young Mallard was jumping for midges and a family of younger ducklings sat with their parents on the bank. 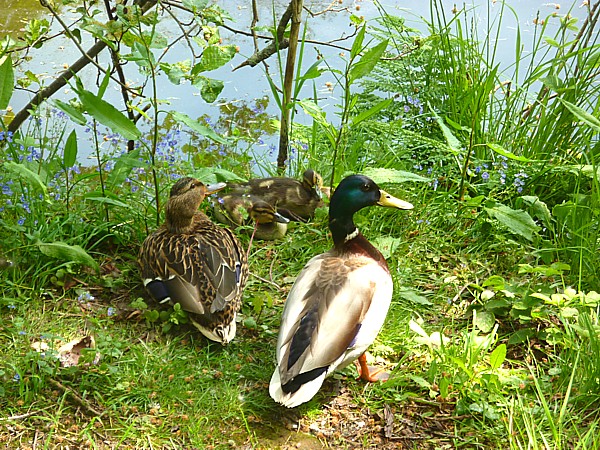 There were a couple of Canada Geese and a Moorhen. Another mother duck and five ducklings were sitting on a fallen tree. When we looked closer we were startled to see that she was a female Mandarin. There was no male Mandarin about so who fathered her brood? A Mallard? You can see that their eye-stripes look Mandarin, but their backs look Mallard. 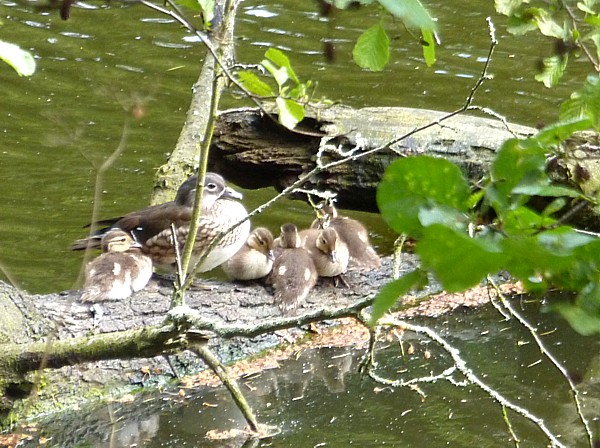 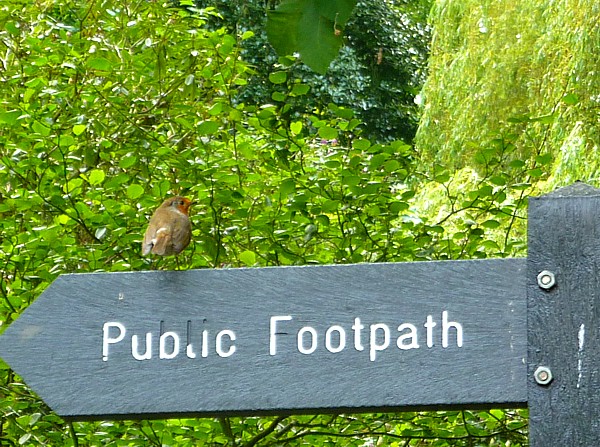 There were some pretty yellow flower in the shadiest areas, which definitely weren’t buttercups. Later identified as Wood Avens.

On a bit of meadow I finally got around to photographing and later identifying this common plant. It’s the Ribwort Plantain. 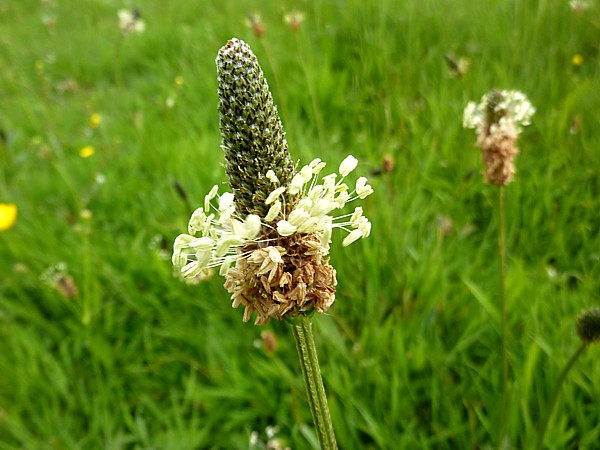 There was a Blackcap in the trees on the other side of the meadow, and a Great Tit nesting in the woods. She came to a branch right by us, apparently trying to see us off. As we approached Arrowe Park Golf Club we saw another Nuthatch coming to seed left on a post. One of the parkland trees bore flowers looking like Russian Vine but the leaves were like Ash. It definitely wasn’t a Rowan. At home, I identified it as a Manna Ash, a tree I’ve heard of but never seen before. 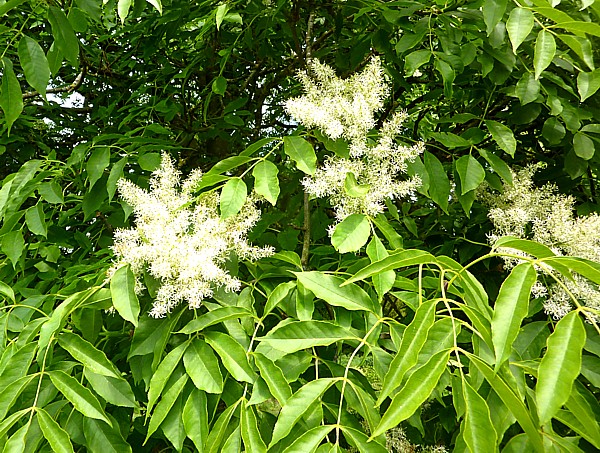 Park birds included Wood Pigeon, Magpie, and some Swallows over the putting green. The Wisteria and the Laburnum were out, and we also noticed two huge Cedars of Lebanon and a row of seven or eight tall Cypresses. Not sure what kind they were. Some were green and some looked like a golden variety. The golden ones had huge buttresses at the base, as if they had been grafted low down, many years ago. 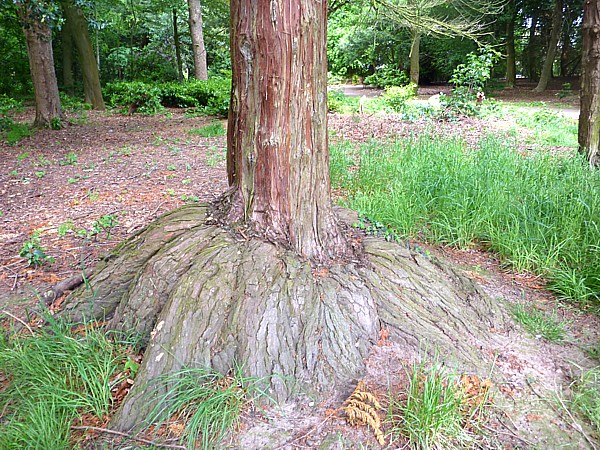 Here’s a lovely sight – sunshine through the back of copper beech leaves. 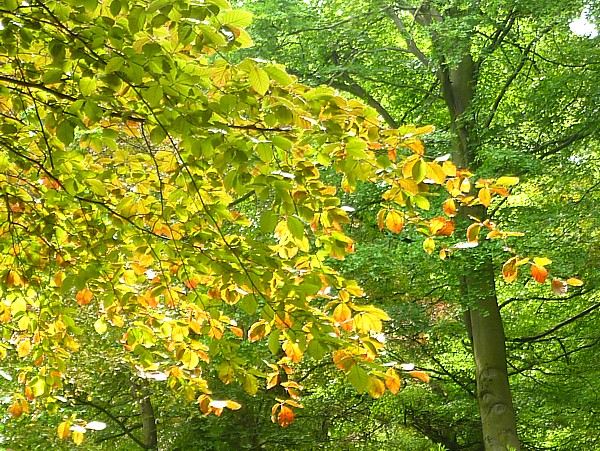 We emerged at the back of Arrowe Park Hospital. They have a wild flower verge, with Speedwell, Vetch, Ox-eye Daisy, and Pink Campion. Despite the bad smell from a sewer drain we lingered, then saw something big flying about. A big bee? A Hornet? No it was a dragonfly! It was a female Broad-bodied Chaser and she posed on a Red Campion, as well-behaved as any photographer could wish! 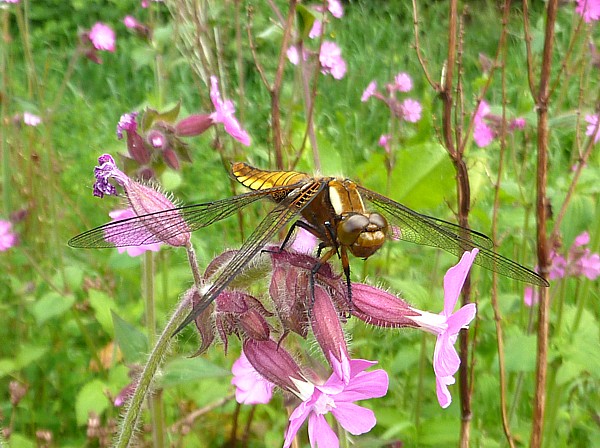 Public transport details: 487 bus from Sir Thomas Street at 10.03, to Greasby Road (Cortsway) outside the Premier Inn, arriving at 10.35. Returned from the Arrowe Park “internal grounds” bus stop on the 471 bus at 1.55, arriving Liverpool City Centre at 2.25.