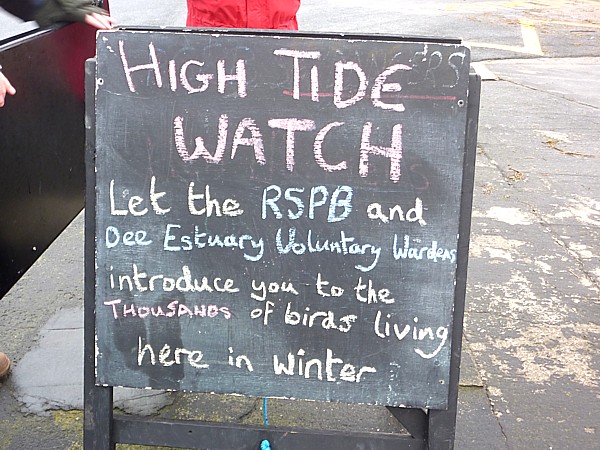 About 13 or 14 MNA members gathered at Kings Gap, plus a few other joint members who came with an RSPB party and many independent birders. There were several “civilians” too, drawn by the Wirral Rangers High Tide Birdwatch or attracted to the gathering of dozens of birders and telescopes. 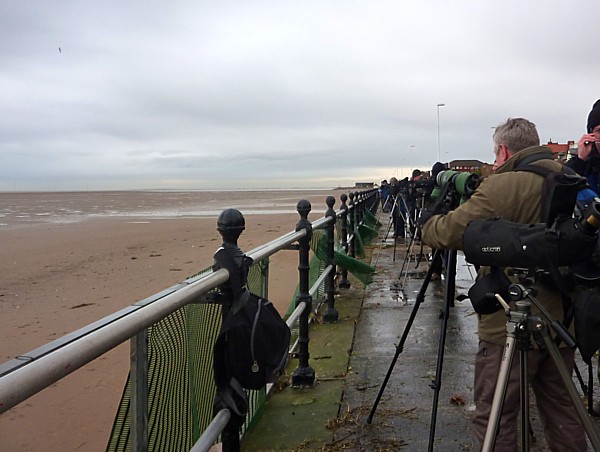 We were very lucky with the weather. It was a calm, mild, dry day, sandwiched in amongst the storms and gales of the previous days and following forecasts. The highest tide was due at about quarter to two, 10.1 metres.

With two hours to go the tide was way out, so the interest was in a Pied Wagtail on the edge of prom and the gulls on the beach: Herring Gulls, Common Gulls, Lesser Black-backed Gulls and Black-headed Gulls. Some Cormorants and a lot of Oyster Catchers were on the distant water’s edge. Various small flocks of birds flew past and then 100+ Bar-tailed Godwits came in. Some telescopes spotted a Peregrine, just sitting on the sand a long way out, waiting for the food to arrive. Also on the beach was, unusually, a Great Crested Grebe. Several times it reared up and tottered towards the sea for a few steps, leaning forward like an unsteady penguin, then flopped onto its breast again. Grebes’ legs are too far back for them to walk well. Many of us had never seen one attempting to walk before. Had this one been stranded by the receding tide several hours before, or had it mistakenly landed on a glistening beach, thinking it was water?

Then several thousand Knot and Dunlin came in, and as the water came nearer, the birds on the tideline sorted themselves into bands. The Bar-tailed Godwits were the outermost, breast-deep in the water. Then a mixed flock of Knot, Dunlin and Grey Plovers on the water’s edge and finally the Sanderlings scurrying about in front. There were also some single Greater Black-backed Gulls out on the water.  One of the WEBS counters later estimated there were 450 Barwits, 5000 Knot, 5000 Dunlin, 200-300 Grey Plover and 200 Sanderlings. 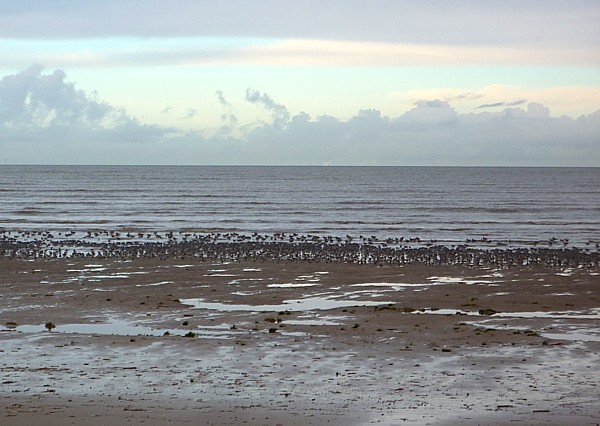 Then suddenly a female Peregrine flew into a wheeling mass of Knot and pursued one out beyond the rest of the flock. We saw her jink and strike then fly off with her prey towards Hilbre.

With 15 minutes to go to high tide the water was lapping the bottom of the slipway railings and most of the birds had flown. Knot were circling in the sky, sometimes making interesting patterns like murmurations of Starlings. Some birders were discussing the theory of “aerial roosting”, suggesting that birds with nowhere left to land circle slowly in the sky, resting, and waiting for the water to recede. 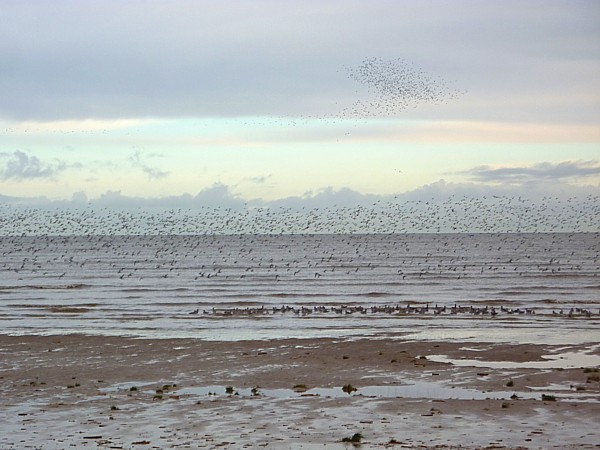 As five Redshanks flew past, another Peregrine appeared, this time a smaller male. He drove some small bird onto the surface of the water, probably a Dunlin, then plucked it up. But then a larger female appeared, perhaps the same one as before, and she forced the male to drop the bird it had just caught (which was still alive and fluttering) and then flew off with her stolen lunch towards Hilbre. What a show! 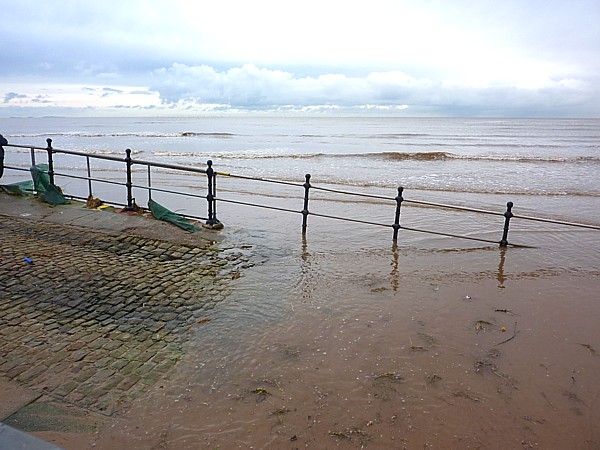 At about 1.30 we moved on to Red Rocks. At the bottom of Stanley Road there were House Sparrows twittering in a thick hedge but we couldn’t see them. There was a Carrion Crow on the bit of remaining beach on the right and a Pied Wagtail on the slipway railing. 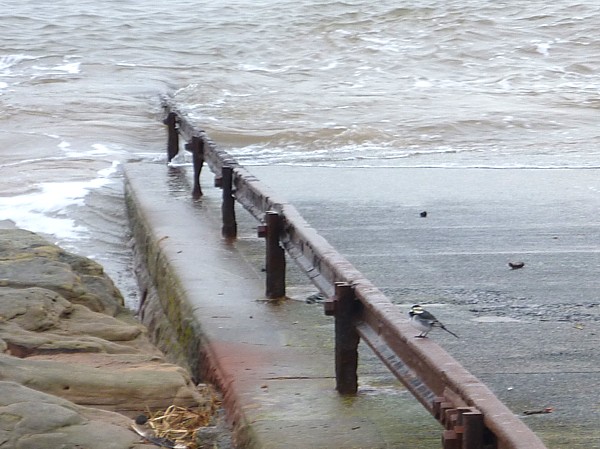 Little Eye was just two low humps in the water, topped with Cormorants. Towards Hilbre there were some Pale-Bellied Brent Geese on the water, perhaps a couple of dozen. More Redshanks flew past and Chris B saw a seal poke its head up. In the very far distance, out by the wind farm at extreme telescope range was a Diver. The group thought it might be a Red-throated Diver, but I see that the Birdguides website had several reports that day of a Great Northern Diver at Hoylake or Hilbre.

Then we set off along the shore towards West Kirby. In the tall bare hedge Les H spotted a tiny cup-shaped nest made of fine fibres, and on the edge of the water was a Redshank with a bad limp. It took a few lurching steps then hunkered down again. Perhaps another victim of a Peregrine?  There were loads of Oyster Catchers on the edge of the salt marsh with several Curlews in amongst them. 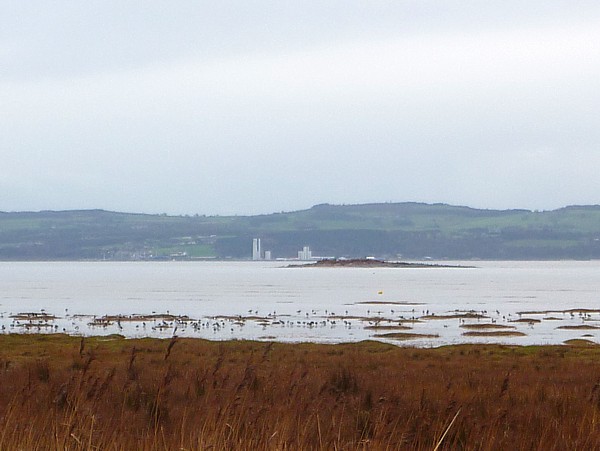 Something was calling from the reeds. A Water Rail?  Christine B played the Water Rail call on her phone, and there was an instant response of repeated squeals from deep in the reeds. That’s confirmed, then! 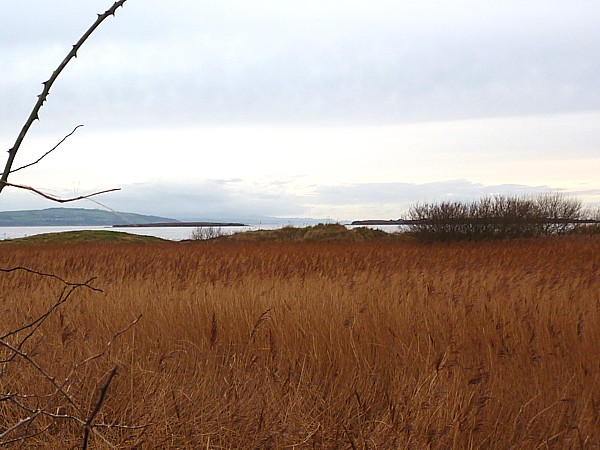 As we approached West Kirby there were Starlings on the bank, and a pair of Stonechats were flycatching from the fence. Chris B led a bit of shell identification on the beach. The pink shells are Baltic Tellins Macoma balthica. 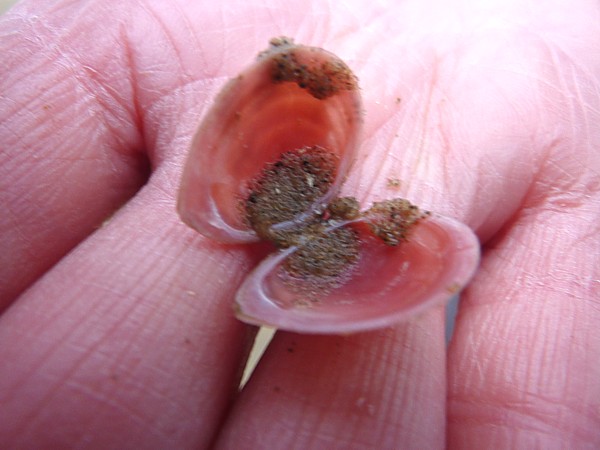 The long straight razors with the hinge at the end are Pod Razors Ensis siliqua. 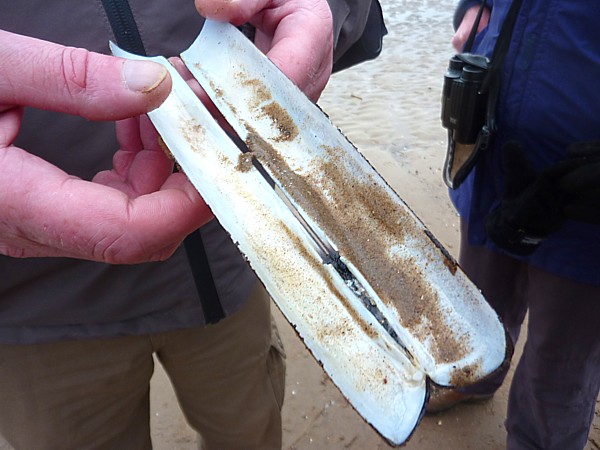 The smaller curved razor shells with the hinge in the middle aren’t razor shells at all, they are clams. The Latin name is Pharus legumen, but they don’t seem to have a common name. 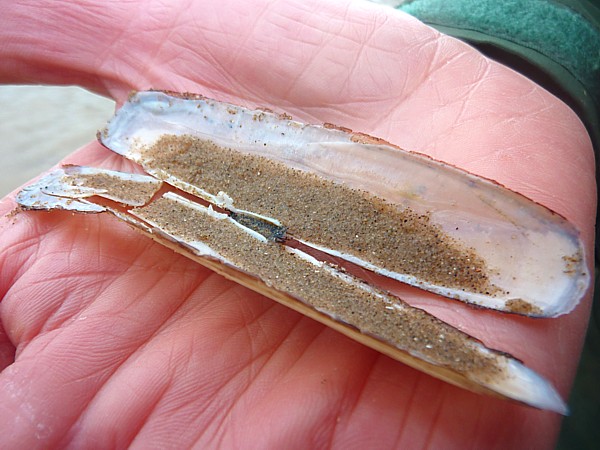 The one curved on both sides is Ensis ensis, which Chris called the Common Razor, and is also known as the Sword Razor. (It would be better named after a scimitar, I think, to emphasise the double curve.) Chris adds “The ones we saw were E. ensis, as both margins were curved, even though they didn’t look as curved or slender as the ones you find on the Sefton coast. One of the problems with molluscs is that shell shape can alter according to the habitat. Open coast individuals can, on occasion, look totally different to those from estuaries.” 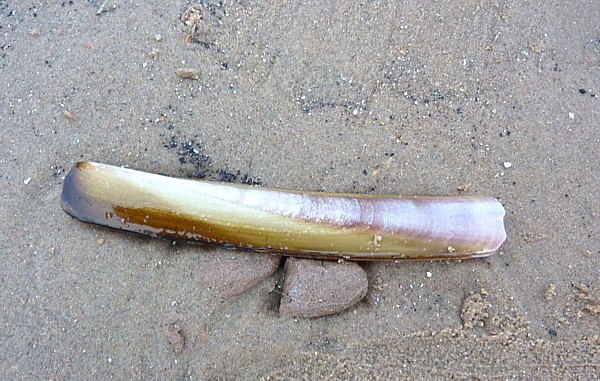 There is another one, which we didn’t see, which is curved on one side but straight on the other, called the Razor Clam Ensis arcuatus.

As we approached the Dee Lane Slipway at West Kirby we noticed tangles of weed caught in the railings, a souvenir of the recent high tides and storm surges. 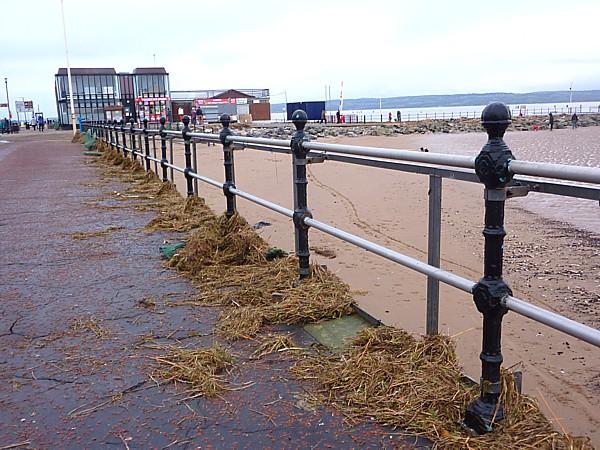 Other reported sightings for the record: Ron Crossley saw about 80 Waxwings yesterday (3rd January) west and downhill from the Mons Hotel in Bootle.  Jean Lund saw a Red Admiral butterfly in flight at Cabin Hill beach on 2nd January.