It was a dispiritingly damp and drizzly day, but we all made it to William Brown Street, despite the clock change. This was our second “fossil” walk following the guidance in the booklet published in 2001 by the The Liverpool Geological Society called “Rock around Liverpool”. Today’s plan was to look at the old flagstones around the Museum and Art Gallery.

The old flags (“made of a fine mica-rich sandstone, probably the Haslingdon flags of Upper Carboniferous age”) show ripples and flutes  “ovoid hollows cut by currents in thin muddy partings in the sandstone which are then filled by the overlying bed of sand”. Here’s one from the junction of Byrom Street. 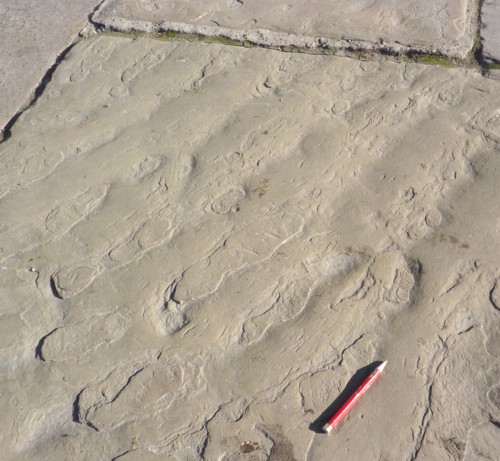 There are said to be “protruberances caused by a ragworm-like animal” outside the doorway of the International Library. We didn’t find them, but they are probably obscured by the hoardings protecting the refurbishment. We did spot what looks suspiciously like pairs of fossil worm burrows on the pavement on the west side of St John’s Gardens (opposite the tunnel entrance), in line with the first half-turret north of the steps and eight courses of flags in from the pavement edge. The paired holes are about three inches apart. 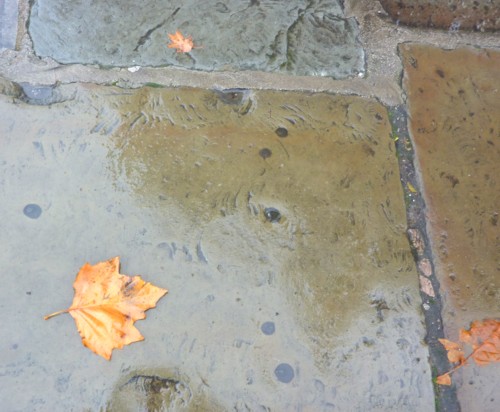 There is also said to be a horizontal burrow of a marine worm “near the side door of St George’s Hall and adjacent to the mid-bollard between the door and the lamp standard”. We couldn’t find that, despite identifying what we thought was the right spot, but there is one suspiciously new-looking flag there, so maybe the fossil burrow has been removed. Five flags east of the the parking circle are several flags showing “an elongate rounded hollow representing the remains of a Carboniferous Coal Measure tree root known as Stigmaria.” 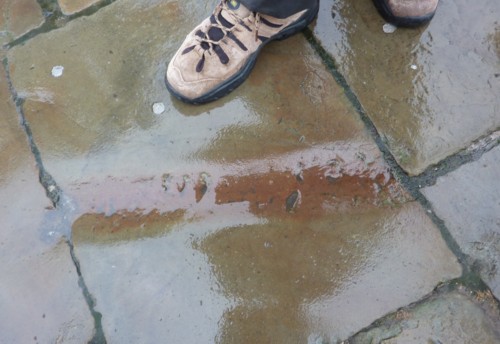 The bollards around the Wellington Column are made of a “nodular limestone from North Wales.” They include cross-sections of large Productus shells, the same as the ones in the steps of the Victoria Monument (see 16th September). There is also one splendid radially-symmetric creature which looks like a coral, in about the sixth bollard from the steps, south of the fountain. 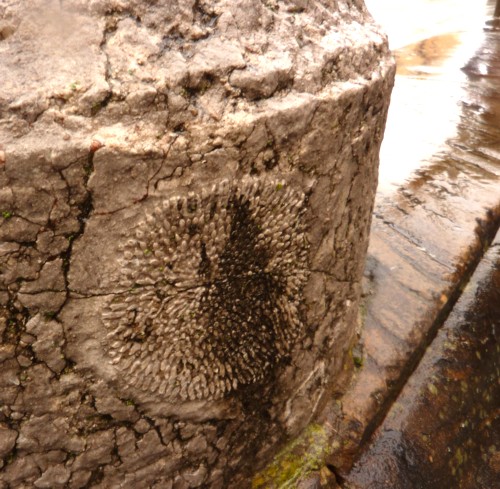 We took a break from the rain in the Walker Art Gallery. As part of the Liverpool Biennial art event, the artist Patrick Murphy has placed some brightly coloured pigeons on the outside of the building. The blurb says “Here they are welcome, colourful visitors. However, the installation also evokes questions about  feelings of being accepted or marginalised. The pigeons can be seen to represent any group that struggles to find a natural home.” 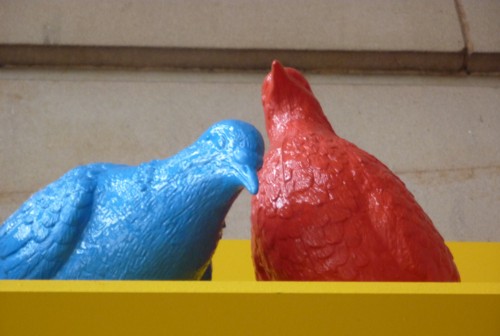 The base of the William Rathbone statue in St John’s Gardens is of limestone, and shows “fine sections of crinoid jointed stalks”. I take that to mean round cross-sections. There are also more Productus shells and some wonderful tower shells. The vertical one on the second picture below is about 2½ inches long. 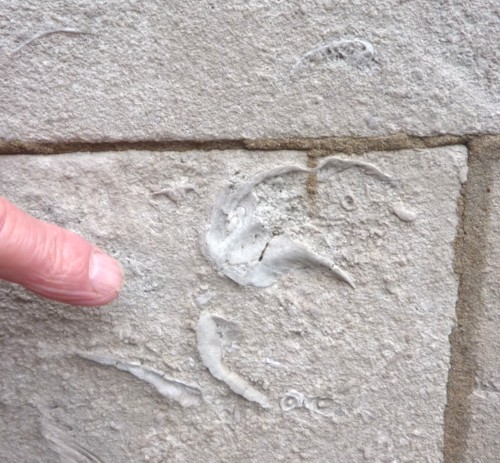 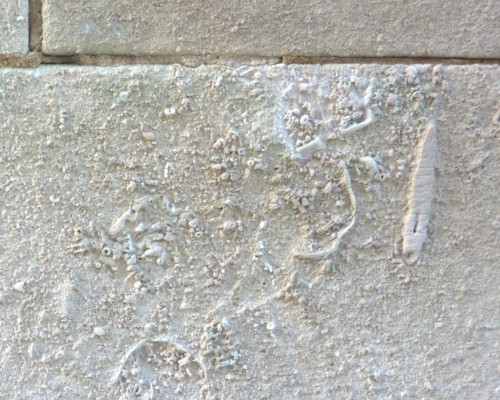 Then we went on our pub crawl, starting at Dr Duncan’s with its magnificent tiled ceiling, followed by the Grade II listed Crown on Lime Street with a wonderful plastered ceiling. Then the great Gin Palace on the Adelphi corner, the Vines (also known as the Big House): this is Grade II* listed (a higher classification than just Grade II), and the staff let us in to see the decaying splendour of the little-used ballroom.  The Central Commercial Hotel opposite Central Station is a riot of glittering cut-glass mirrors, and is also Grade II.

The manager of the Beehive at the bottom of Mount Pleasant confided to us that the bar was where “the Cameo murder was planned” in 1950. The Roscoe Head on the corner of Roscoe Street and Hardman Street is one of only seven pubs in Britain to have been included in all editions of CAMRA’s Good Beer Guide. The Philharmonic was very quiet, and I achived a lifetime ambition of sneaking a glimpse of the marble urinals in the Gents! Some of the less worldly-wise members of the group had to have it explained to them why the two lounges are called Brahms and Lizt (very little to do with classical music!).

At the The Cracke, John Lennon’s pub, we sat in the tiny back room called the War Office, and then we made our final call of the day at Peter Kavanaghs on Egerton Street. This is also Grade II listed, and has an eclectic mix of interesting old junk hanging from the ceiling: gas masks, chamber pots, old radios and toy prams. The snugs contain wall paintings of scenes from Hogarth and The Pickwick Papers. Earlier on, Olive had found a very damp tenner in the street, so finally, at our ninth pub, it was drinks all round!