It was a lovely day for the ride on the ferry, and they even have a new commentary!

Right by the Seacombe Ferry building I was surprised to see Feral Pigeons pecking about on the beach (they do it a lot, apparently). I had them pegged as diehard “townies”. Skulking quietly under the pier, near the water’s edge, were three Turnstones. One seemed to be well on the way to its summer plumage and should have flown north weeks ago. Perhaps it was a young one which won’t breed this year. Another surprise was a Ringed Plover. That shouldn’t be here any more either!  Herring Gulls and Lesser Black-backed Gulls were scattered all over the beach, and there were a couple of Shelduck. Opposite Vale Park we spotted some Common Terns diving over a buoy. 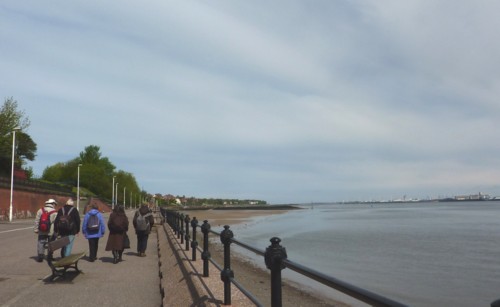 It was sunny and warm, although there was a lively breeze. Some of the first Hawthorn trees were in flower in the seafront gardens and near Magazine Lane a tree was shedding lots of fluffy white male flowers. We tried to see which tree they came from, without success. Anyone know what they are? Elm? Ash? Some kind of Poplar? (Added 20 May – possibly a hybrid Black Poplar) 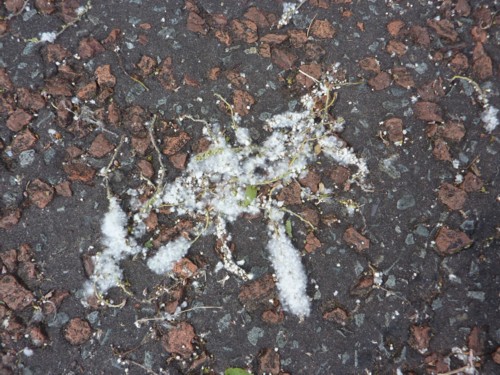 Quince was flowering in Vale Park, Swallows flew over and we saw a Large White butterfly. Opposite Manor Lane there is a bit of rocky / sandy breakwater which rarely gets covered by the tide, so it has some beach-loving plant life, including big clumps of Sea Kale and a good showing of Red Valerian. 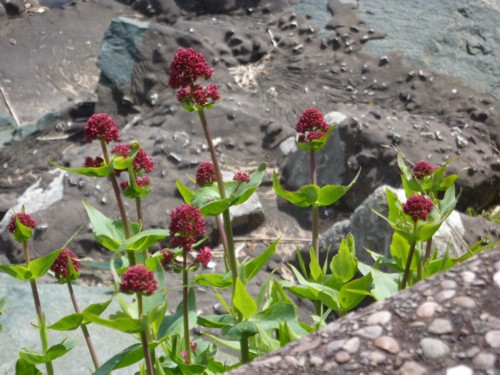 There are House Martins near New Brighton, and fossil oysters in the sea-defence rocks near the Lifeboat Station. At the Marine Lake people were lining the railings and catching crabs with a simple line and any old bait.

As for man-made attractions, we looked at the artwork embedded in the seafront roadway all along from Seacombe to New Brighton, and particlarly liked the ring of dancers, commemorating the Tower Ballroom, whose dresses were picked out in various polished granites. 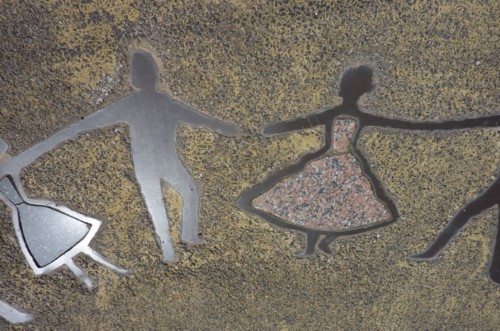