We started the day with some fun with public transport. Since there were road works in Dale Street, the 300 bus, which usually stops in Sir Thomas Street, was meant to stop at Queen Square, but nobody had told the drivers. It sailed past and the Merseytravel men with walkie-talkies were unable to contact it.  So we jumped on a 130 which gets to the Black Bull by a more direct route, passed our 300 near Orrell Park Station, and just caught it at the next stop. What larks!

It was a warm sunny day, which wouldn’t shame July. From the stop after the Weld Blundell we went on a circular walk through fields and farms, taken from a published leaflet. Spanish bluebells were just coming out, and primroses, dandelions, nettles and forget-me-nots were in bloom. Amongst the houses we saw a Starling, Blue Tits, Goldfinches, Sparrows and a Blackbird, and heard a Greenfinch and a Pheasant calling.  On the footpath to Pygon Hill Lane we saw lots of butterflies: Orange Tips, Peacocks and a Small Tortoiseshell. Later in the day we saw a Speckled Wood. The newly-ploughed fields had Crows, Jackdaws, Magpies, Herring Gulls and Lesser Black-backed Gulls, some Rooks and a few calling Lapwings.

There is an old stone set into the footpath which says “From this spot six churches can be seen. Find them”. We tried, but only saw four, and a fifth one when we walked a little further along. 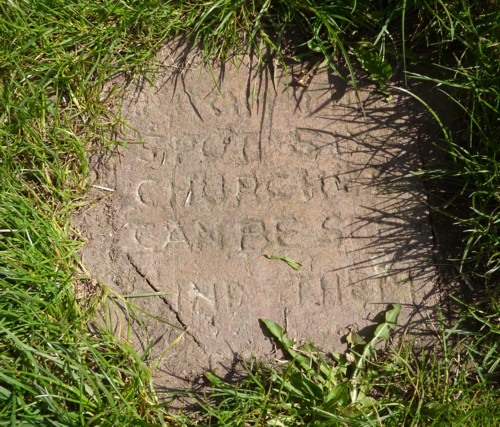 We had our lunch under a Blackthorn bush in full bloom. 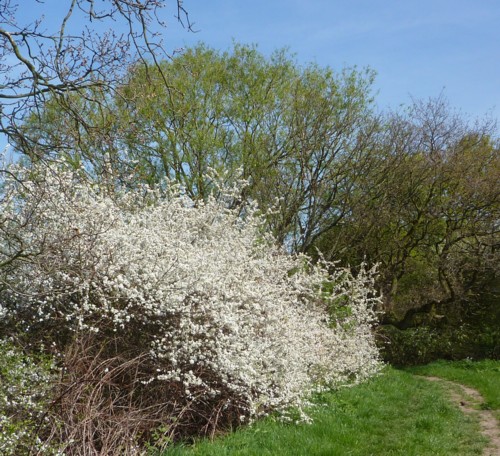 Just like the one two weeks ago, it didn’t seem to have any thorns, but there were dozens of 7-spot Ladybirds all over the blossom.

The rest of the walk took us past a small pig farm, several fields full of horses, one field of black-faced sheep and their lambs, and all had plenty of flying insects. The only thing missing was Swallows. We saw one two weeks ago at Leasowe, but the main migration doesn’t seem to have arrived yet.  The farmer was planting his spuds, a large field of oilseed rape was already in bloom, and we saw two different species of Bumblebee, Red-tailed and Buff-tailed. 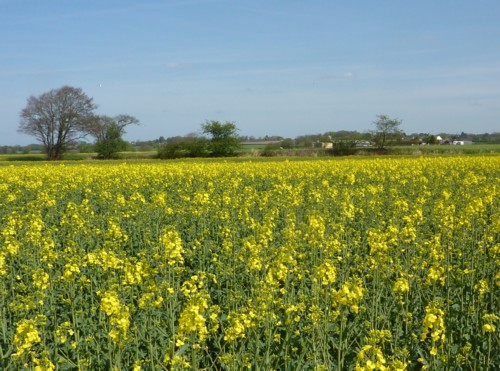 We passed the remains of a mediaeval moated site, Walsh Hall, then through a farm yard, gingerly over a narrow plank bridge, across the canal and we were at the bus stop outside Our Lady’s RC church in Lydiate for the 300 at 3.20 to take us back to Liverpool.