Before meeting the group I checked some of the trees in St John’s Gardens. The Indian Bean trees are in bud and will flower shortly. The Trees of Heaven are flowering, but what kind of flowers are they? Various books say they bear both male and female flowers, usually on separate trees. I can’t say I saw any differences so I’ll just have to wait and see which ones bear seed. We walked a different way to Pickerings Pasture today, on the private road around the water treatment works. There were plenty of Ragwort plants along the roadside, and we looked for Cinnabar moth caterpillars, and found them on only one plant, clustered on the buds. All along the roadside was a very tall plant of the “dandelion-ish” persuasion, the biggest perhaps 8 feet high. Probably Prickly Lettuce, Lactuca seriola. 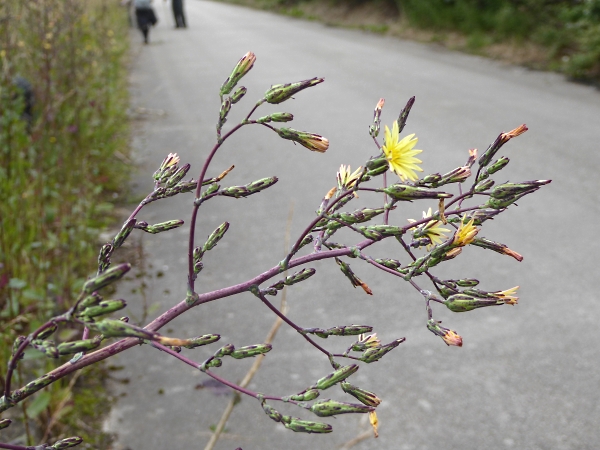 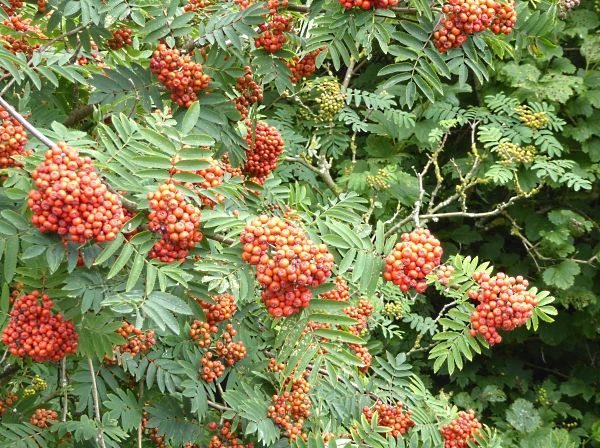 Other flowers included Rosebay Willowherb, a yellow pea flower on a spike which was one of the Melilots, Red and white clover, Wood Avens and some patches of unusually tall Self-heal, some growing over 6 inches high, when they are usually very low to the ground. It was supposed to be showery, but it stayed dry, and although it went threateningly overcast once or twice, there were also intervals of bright sunshine, which brought out butterflies. We spotted Meadow Brown, Large White, Small White, Green-veined White, Gatekeeper and Speckled Wood. We emerged into Pickerings Pasture at the south end, near the bird hide. The bird feeder in the woods there has been vandalised, but from the hide we saw a Heron, a Black-headed Gull, a Lesser Black-backed Gull, loads of Canada Geese, some Shelduck and a Cormorant. Nothing very exciting, sadly. As we returned through the wood we spotted a Spindle tree, Euonymus europaeus, one of the native British trees, and one we don’t see very often. The oddly-shaped seeds were still green, but they will go bright orange in the autumn. 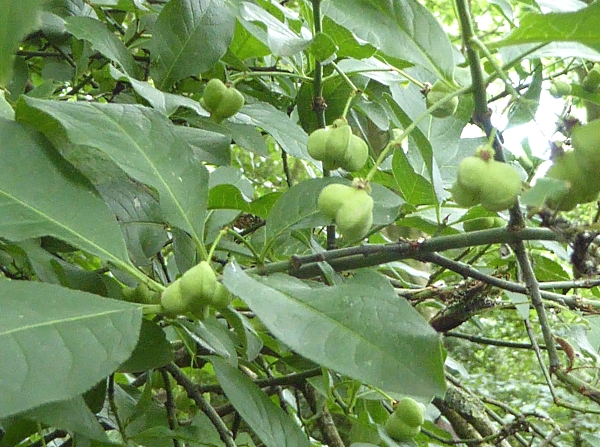 They have planted a great field of Meadow Cranesbill, with occasional Yellow Rattle and Musk Mallow.  It was full of bees and other insects, and both Swifts and Swallows were overhead. We also found several very bright and smart Small Tortoiseshells, and there were a few Orchids in the meadow. 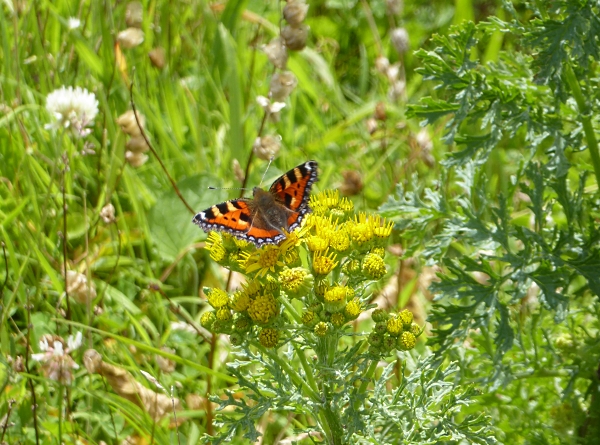 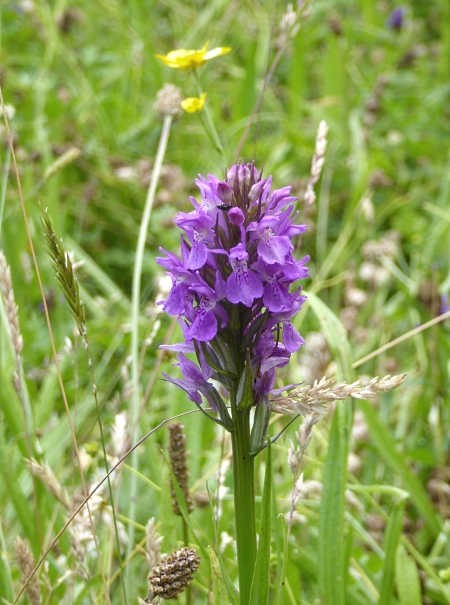 We heard a Great Spotted Woodpecker, but it didn’t show itself. There’s an Aspen tree there, the only one I can recall seeing in the whole of Merseyside. It’s near the junction of the “inland” path with the path that goes towards the river and the visitors’ centre, not far from the Control Meadow (= the Bramble patch). Near the visitors’ centre a small Lime tree was in splendid flower. 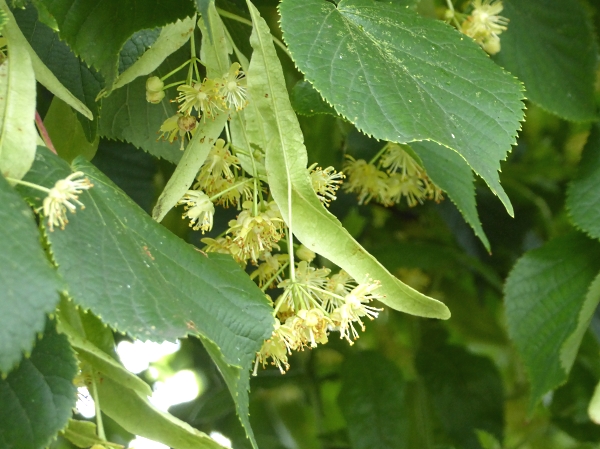 There was another tree on the island in the car park. At first glance it said “Sweet Chestnut”, but it wasn’t. It had long leaves, about six inches long, with serrated edges. We were scratching our heads, and then we spotted Alder cones on the ground. Further scrutiny revealed Alder cones actually growing on the tree itself, so there was no doubt about it. We’ve never seen an Alder with leaves like that before. After a quick riffle through the book we decided it had to be a Grey Alder, Alnus incana, a new one to us, which has to be Tree of the Day. Mitchell says it’s rare as a garden tree, but “a useful tree for rapid growth on dry and difficult soils; planted in land-reclamation schemes.” That sounds right. 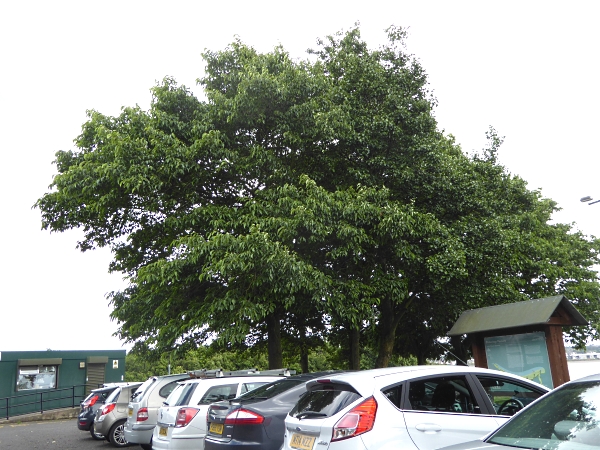 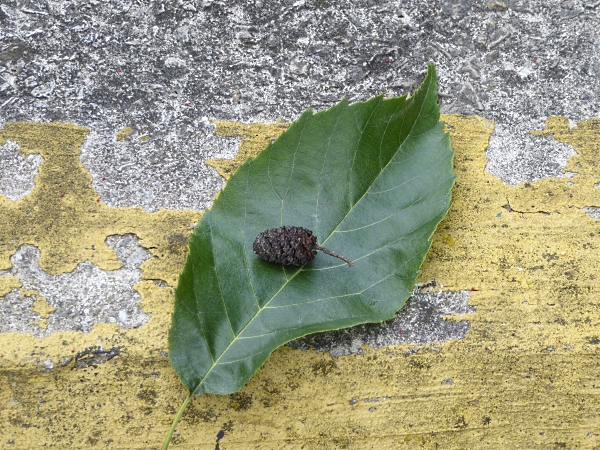 The tide was coming in strongly as we headed north towards the footbridge, then up the steps and back by the woodland path. There were Shelduck and Lapwing on the sandbanks and big patches of frothy yellow Ladies Bedstraw by the wayside. Another patch of pink flowers with square stems foxed us. Could it be Corn Mint or its hybrid with water mint called Whorled Mint? 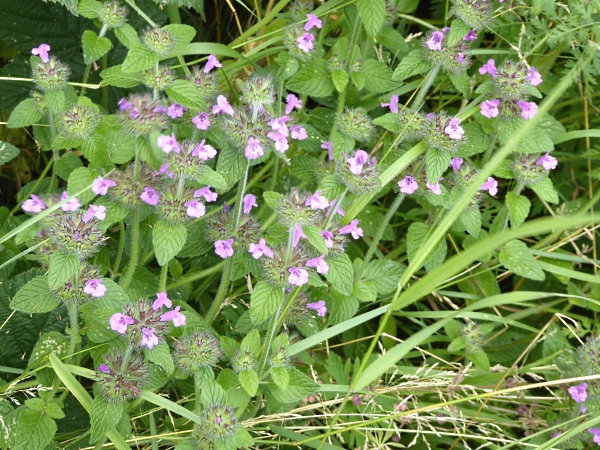 There was also lots of Wild Carrot. I’m used to the flowers having a pink bit in the middle, but these all seemed to have a small black insect on them. Closer inspection revealed a central floret that was so dark red or purple as to be almost black. It stood up from the others, too. 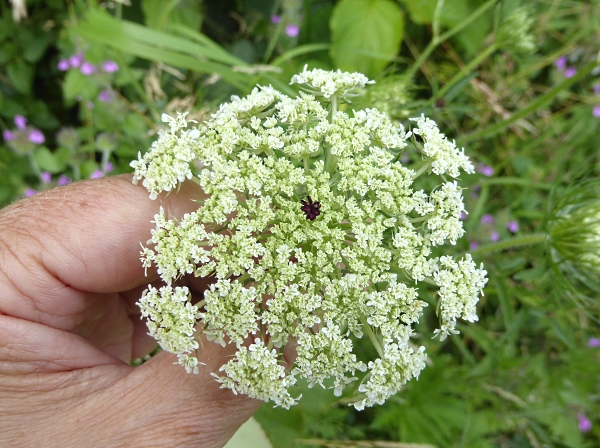 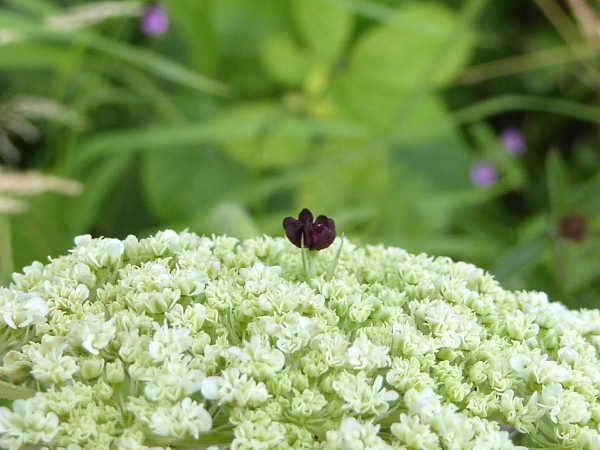 We walked back to the bus up Mersey View Road. There were ripe wild Plums in the hedges, the Privet was flowering and the Field Maple seeds were looking autumnal already.