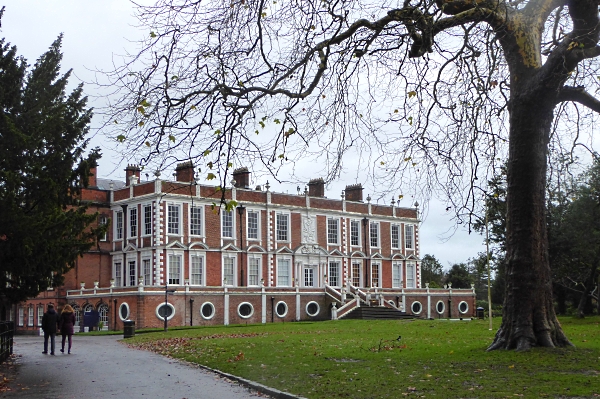 Croxteth Hall Country Park was once the country estate and ancestral home of the Molyneux family, the Earls of Sefton. It is now managed as a park by the City of Liverpool. It is said to be one of the “finest working country estates in the North West” (of England) and has the historic Hall, the home farm with rare-breed cattle, a Victorian walled garden, 500 acres of country park and nature reserve, an outpost of Myerscough Agricultural College and a (horse) riding school. 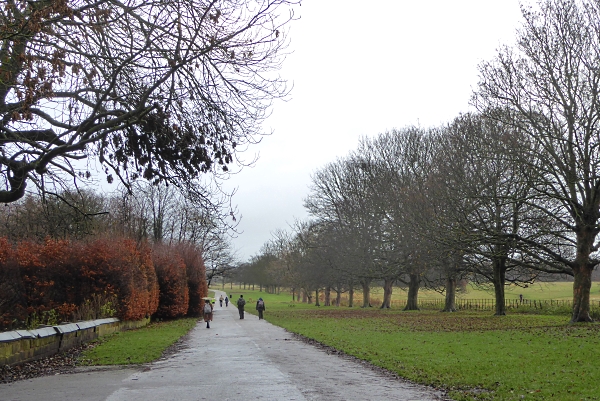 In a mild drizzle we set off from West Derby village on the long walk up to the Hall. Some of the old fungus-ridden Birches along the path have disappeared, no doubt finally felled. On the north side of the avenue the ground is wet and becoming rough and sedgy. “A good spot for Snipe”, said John. New bird boxes had been put up, and a charm of Goldfinches flew between the bare wintry trees. On the ground were Magpies, Carrion Crows, Wood Pigeons, a Pied Wagtail and Black-headed Gulls, with a solitary Common Gull contemplating the possibility of worms. About halfway along we came to the fields with Highland Cattle and red-and white Irish Moiled cows, while the Highland Bull bellowed at us from its separate enclosure on the other side. 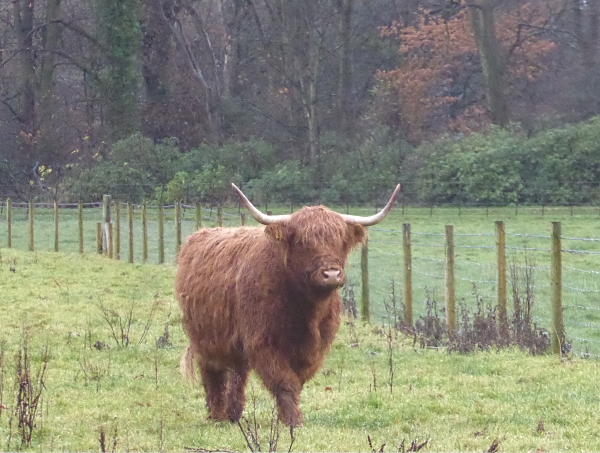 In the courtyard there were two Starlings on the weather vane. 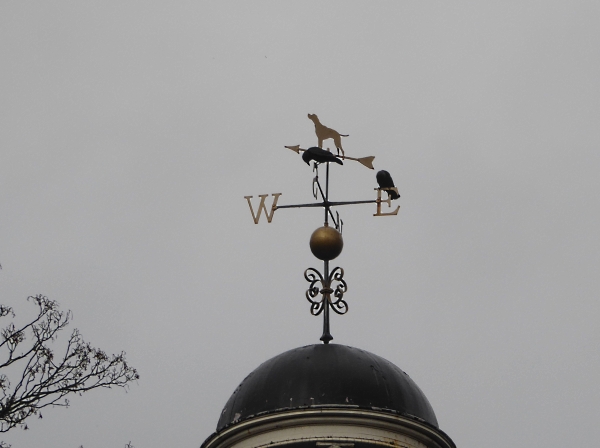 Opposite the children’s play area we spotted a gate with the sign “Wildflower Glade and Minibeast Area” with a muddy path leading into the trees on the west of the Long Pond. So that was where all the woodland birds had gone!  The glade and surrounding trees were very busy indeed, especially around a big Larch. I have always thought Larches were scruffy, no-account trees, but the copious cones and seeds on this one were attracting all sorts of wildlife. 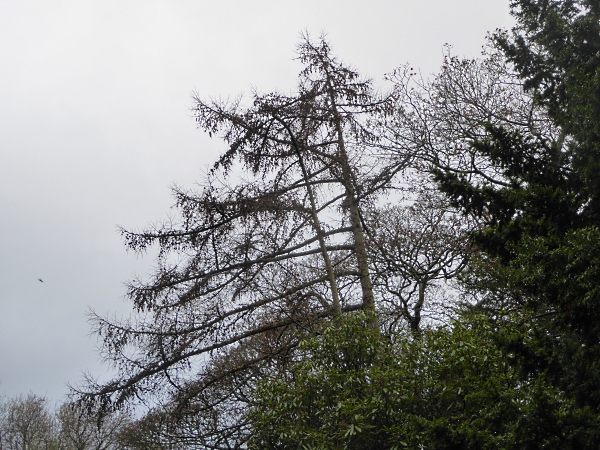 Several Redwings and a Mistle Thrush were flying around it, and within the branches we spotted a Long-tailed Tit and a tiny, always-moving Goldcrest. 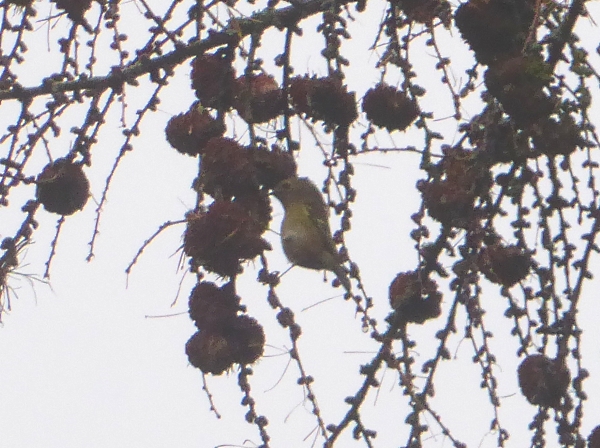 Further on was a Nuthatch, a Treecreeper and a Grey Squirrel keeping watch. A Jay flew quickly away from us, but we spotted it later. Around the corner was a single Mallard on the pond, and Blackbirds and Great Tits in the trees.  After lunch we admired some of the park’s notable trees, including a rare Lucombe Oak Quercus x hispanica, (a hybrid of the Turkey Oak and the Cork Oak) on the lawn opposite the west front of the Hall. Around the back are a huge Pin Oak and a lovely rusty-red Swamp Cypress (I love a Swamp Cypress). 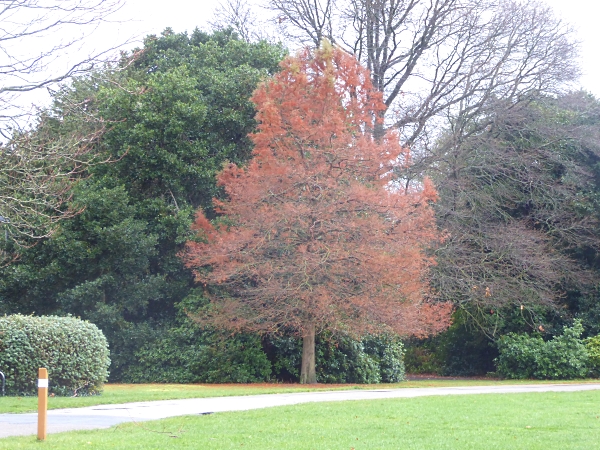 We went snooping around into gardener’s territory, along the path behind the walled garden. Nobody usually comes this way on a Sunday. There is a wonderful long Beech hedge, and at the base of it was a Nuthatch, which is rarely seen on the ground. There was a Robin further along, too, both on this picture. 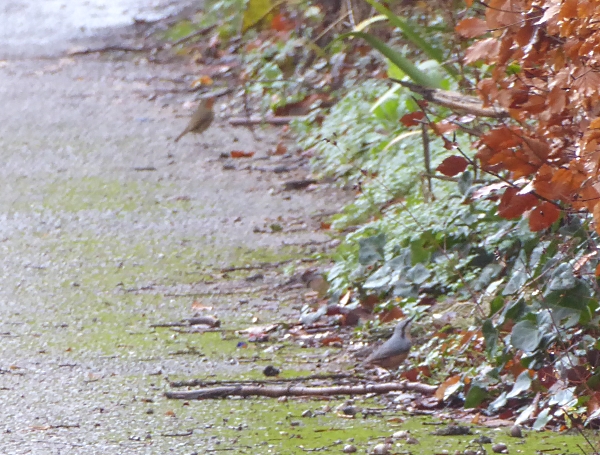 The only splashes of real colour all day were these Iris berries on the edge of the River Alt, and a Rhododendron bush starting to flower. It’s ahead of its time, but the weather has been so mild. 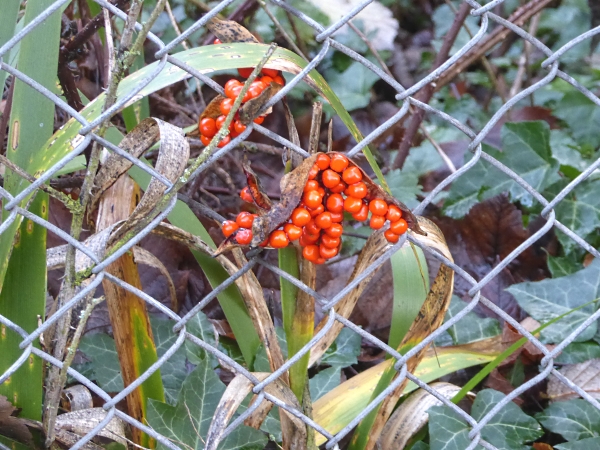 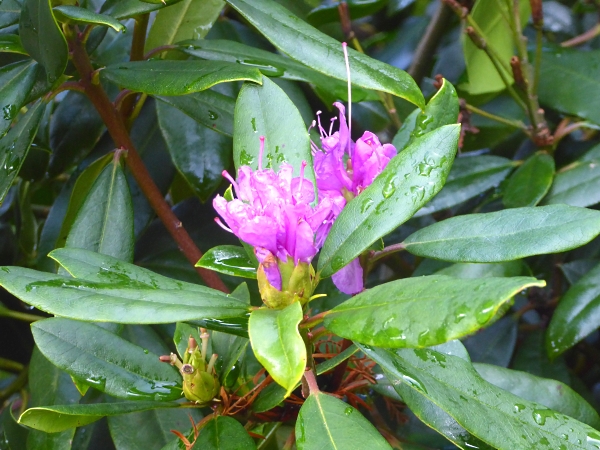 As we headed back towards West Derby Village we came across a young man with a female Harris Hawk, 22 weeks old, which he had bred himself and was just starting to train. 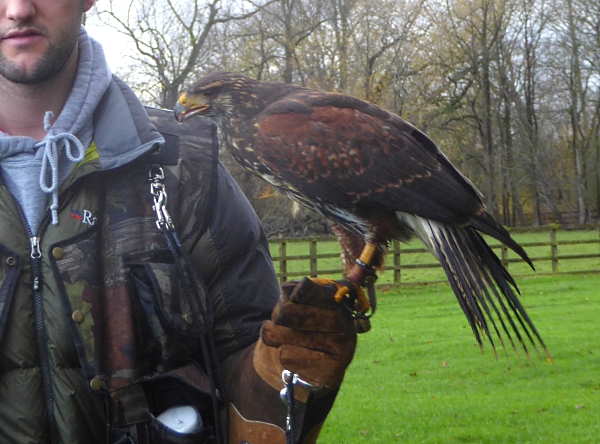 Just to add that John had been to Chester in the week, and he spotted one of the hundreds of Black-headed Gulls by the Dee at The Groves which had a leg ring – right leg, black on white, four digits beginning with a J. I looked it up on the Euring website and found that “J” BHGs are being ringed by the Lista Ringing Group of Vanse, southern Norway. I have mailed them to say bird J4U8 has been spotted a very long way from home! (See report on this bird, posted 4th January 2019) 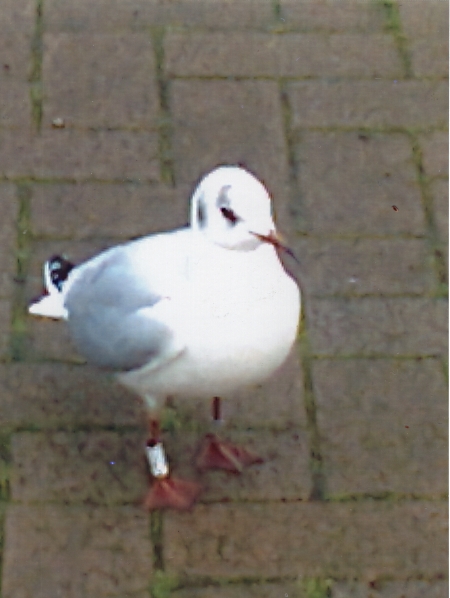 Public transport details: Bus 12 at 10.20 from Lime Street (it’s usually from Queen Square but the bus stop was moved today because of the Santa Dash), arriving Mill Lane / West Derby Village at 10.35.  Returned from Mill Lane / Town Row on the 13 bus at 2.25, arriving Liverpool 2.55.