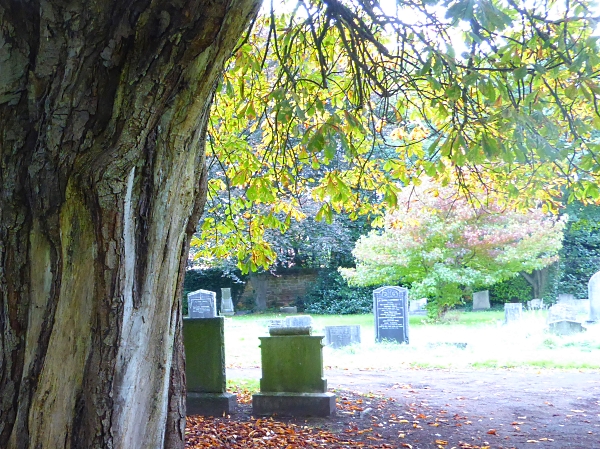 Since it was Heritage Open Day, the Flaybrick Chapels were open to the public from 2pm, but we had the morning to mooch around the gardens. I have been studying the tree survey in the Conservation Management Plan (CMP) (see the link to it in the report of our previous visit on 8th July) and cross-checking it against two previous tree lists. There were some discrepancies I wanted to check.

From the bus stop we strolled through King George’s Way woods and Tam O’Shanter’s car park. Rain had been forecast, but we got a dull and cloudy day instead. Our first stop was the grave of Edward Kemp. He laid out Flaybrick Cemetery and many local parks, including many of our favourite Sunday Walk destinations. We have to regard him as our patron saint! 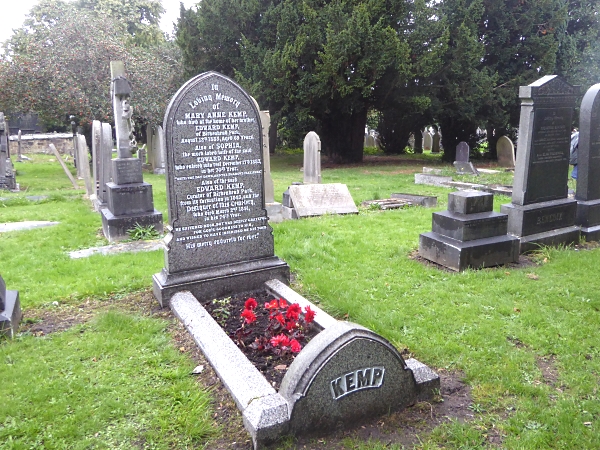 The tree plan in the CMP incorrectly identified several Deodar Cedars as Cedars of Lebanon, which we looked at, just to be sure. Yes, they are definitely Deodars. It also noted a Sawara Cypress in “shrubbery G44”, but that wasn’t marked on the map so we had to guess where it was. We rummaged in a likely place, but no obvious Cypresses. We had better luck with the tree said to be a “Weeping Large-Leaved Lime”. It’s a fine tree, but not obviously “weeping”. None of my tree books mention a weeping variety, either. 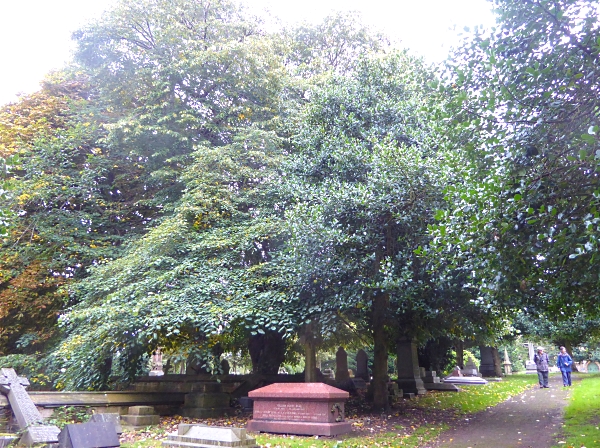 I’m still not sure about Large-leaved Limes. The books say that the fruits are “8-10mm” and “five-ribbed”, but I’ve never seen fruits like that. They all seem smaller and rounder, like the ones on this tree. Is it possible that we have a local variant in Merseyside, or is it hybridisation? They are very hard to definitely identify, anyway. 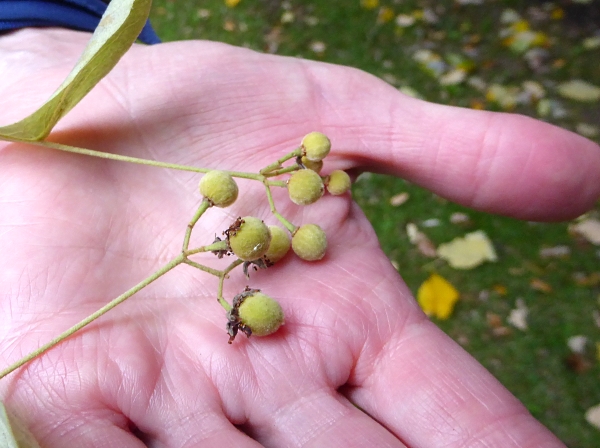 The CMP suggested that lots of the overgrown Hollies should be pruned, to let in more light. The volunteers have been heeding that advice, and we noted many severely-lopped Holly trunks, all sprouting exuberant new pink and white growth. 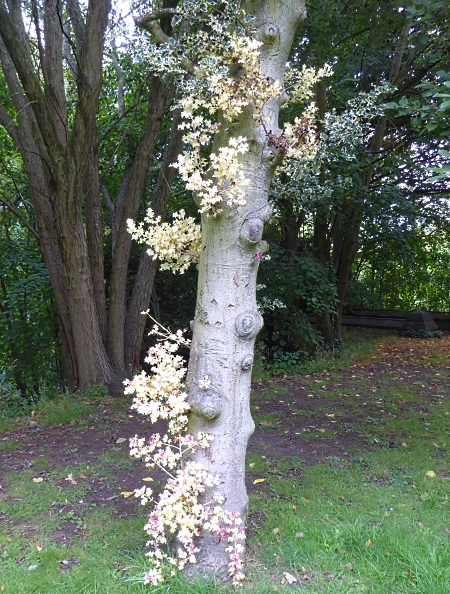 Two trees previously noted as Large-leaved Limes have recently been re-identified as American Limes or American Basswoods, Tilia americana. One is the National Champion for girth, and according to the Friends of Flaybrick Facebook page, was fitted with an official “Champion” nameplate several weeks ago. We went to see it, and hunted high and low on the trunk and through the low sprouts, but we couldn’t find it. Later a volunteer at the chapels told us that the label had been pinched, but another is on the way! 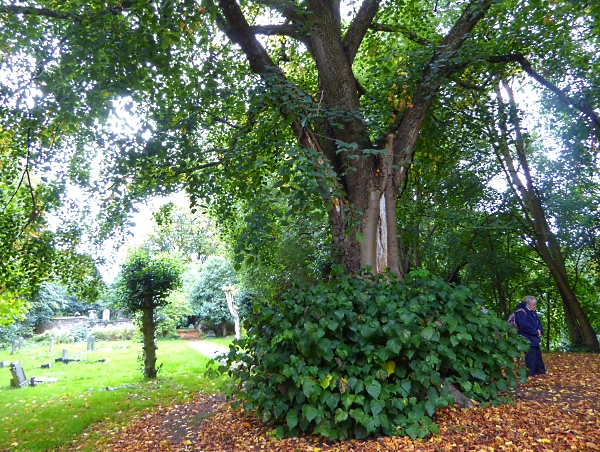 Our last tree before lunch was a huge Horse Chestnut, possibly an original Kemp planting, which has the disease “bleeding canker” and might drop large branches, making it a danger to passers-by. It is to be felled, which is sad, because it’s still a fine-looking tree. 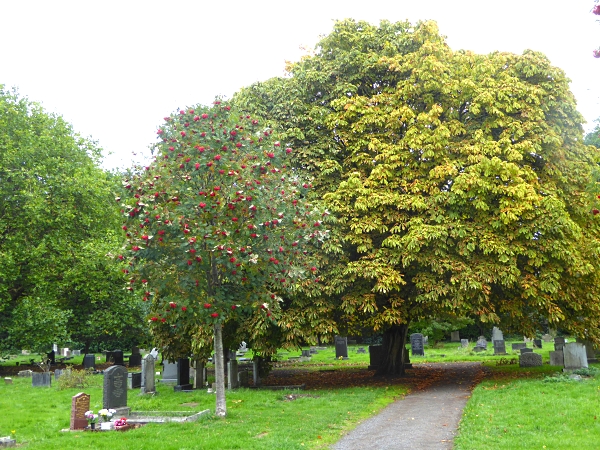 We lunched on the picnic tables in Tam O’Shanter and then found a cluster of interesting trees we hadn’t noted before. At the back corner of Tam’s cottage, opposite the loos, some connoisseur has planted a Mulberry, a Gingko and a Contorted Hazel in the garden!  Since we still had some time before the chapels opened we went back into Flaybrick to pay our respects to the Exeter Elm, which has died in this summer’s drought. It had several claims to fame. It was a rare Elm variety which had survived Dutch Elm disease so was a tree of national significance, it was thought to be an original Kemp planting, and it was host to a colony of White-letter hairstreak butterflies until about 10 years ago. But now it’s bare, grey and dead.

But a dead tree is always an opportunity for something else. It has been claimed by a Great Spotted Woodpecker, which sat on the highest dead twig and watched us closely to make sure we were leaving!  Then we were distracted by a young Ash tree which looked a bit odd. The “keys” were a bit sparse, slim and pale, and there were only five leaflets on the leaves. It might have been just because it was a young tree, but I later found that the survey map identifies it as a Manna Ash. That’s quite gratifying, that we spotted something different about the Ash, even though we couldn’t say exactly what it was. 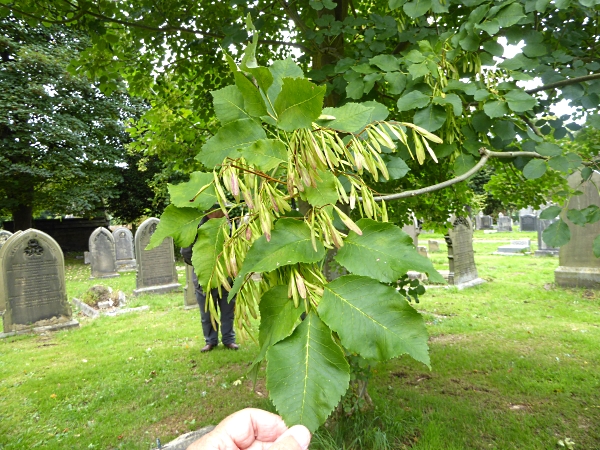 Our last rare tree was the Orange-berried Service Tree, which had me puzzling over my ID guides a couple of years ago. Now it has a tree label fixed to the trunk, saying it is Sorbus croceocarpa, a tree so rare it isn’t in any of my books. It is sometimes called the Orange Whitebeam and is thought to have been introduced from Southern Europe. Most of the British ones are in the North West of England, so I wonder if Kemp was responsible? 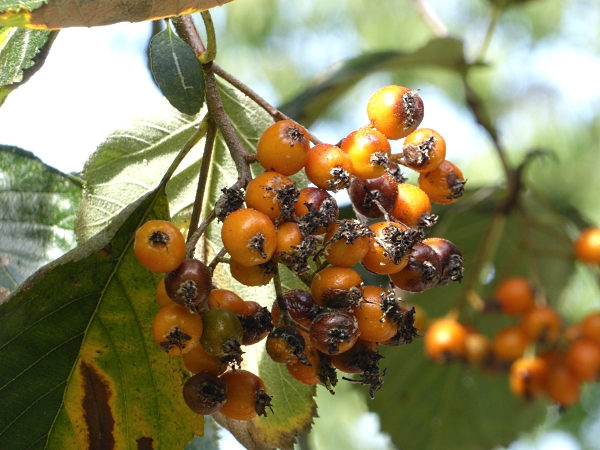 Then we had a look around the ruined chapels. The Friends had a display area, giving out their new leaflet and hoping for new members. 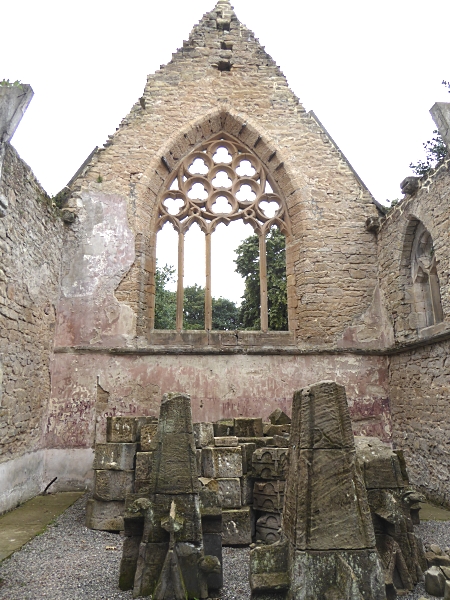