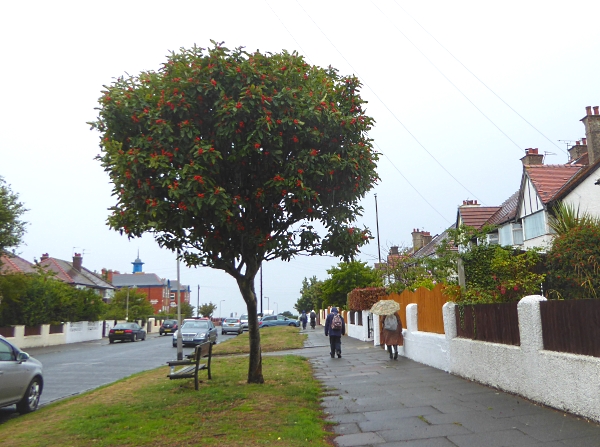 It was a wet, drizzly day as we trudged down Manor Road and Hoyle Road to the Lifeboat Station on North Parade, then along to the seafront shelter. There was a high tide due just after noon, which brings lots of waders close inshore. One advantage of the terrible weather was that there were no holidaymakers or noisy kids. We had it all to ourselves, apart from a couple of hard-core bird watchers with telescopes. 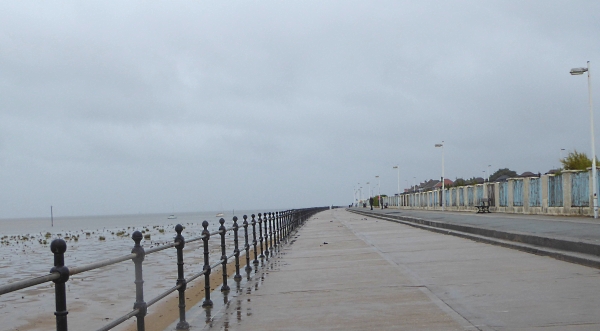 We settled into the shelter and just stayed there, watching the birds. To our initial dismay, a man with three dogs on leads walked out past the gulls, but he disturbed them only a little, merely making them walk aside nervously. When he was further out he let the dogs loose and they ran about and had fun, apparently not bothering any birds. Then the leads were re-attached and they all walked back. Although we were worried at first, it seems that the messages about not disturbing the birds are getting through to the locals. Well done that man! The birder with the top-notch telescope called out Grey Plovers on the distant tide line and later he reported Bar-tailed Godwits and a Whimbrel very far out, beyond our binocular range, but we were more interested in the little birds closer in. There were a surprising number of Pied Wagtails, all looking rather scruffy, and I suppose they were moulting. 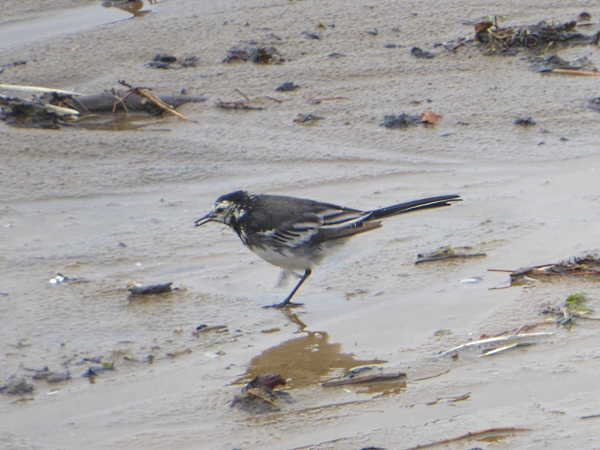 Dunlin were scurrying about, many with their summer-plumage black bellies. 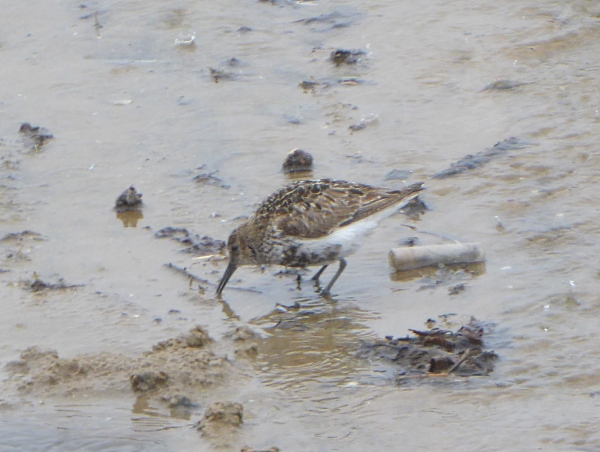 There were huge numbers of Ringed Plover, most with black beaks and pristine plumage, identifying them as this year’s young. They were feeding in the shallow mud by foot-waggling, like Egrets do, to disturb the sand and reveal things to eat. 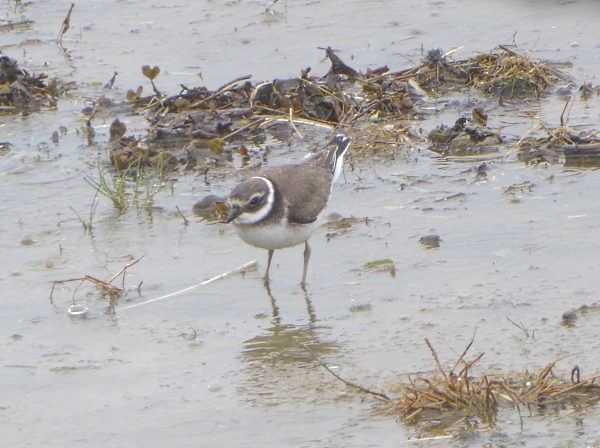 We ate our lunch there, revelling in the wonderful views of these little birds, all just by the sea wall, and nearer than we have ever seen them. They didn’t appear to be a bit bothered that we were there in the shelter so long as we didn’t get up and walk about. They seemed to like that particular spot, bickering occasionally over the right puddle, perhaps because a little stream of clean rainwater came out onto the beach there. 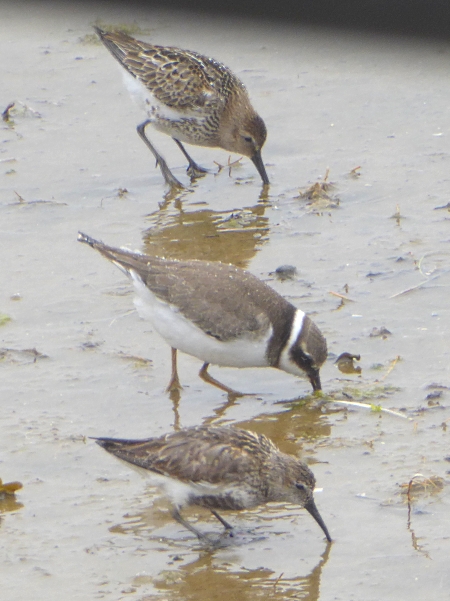 The tide didn’t come right in, so the gulls congregated further out – Lesser and Greater Black-backs, Herring Gulls and Black-headed Gulls. Out by the rocks off the Lifeboat Station was a long line of  Oystercatchers.

There was group of over 100 Terns, nearly all Sandwich Terns with black beaks. Amongst them were two or three Common Terns, which I can now pick out on my photo, with shorter legs, blacker heads and red beaks. There’s one on the left of the tuft of Spartina grass, two birds back from the gull. 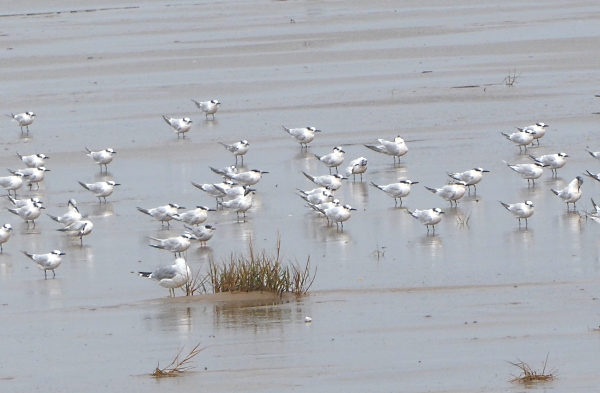 We’d been sitting too long, and getting cold. Two of us had put their gloves on! We took a turn around Parade Gardens, noting the Tamarisk hedge. Some of it was just starting to flower. I thought it was an early spring bloomer, but the books say late summer into autumn, so it was just getting going. 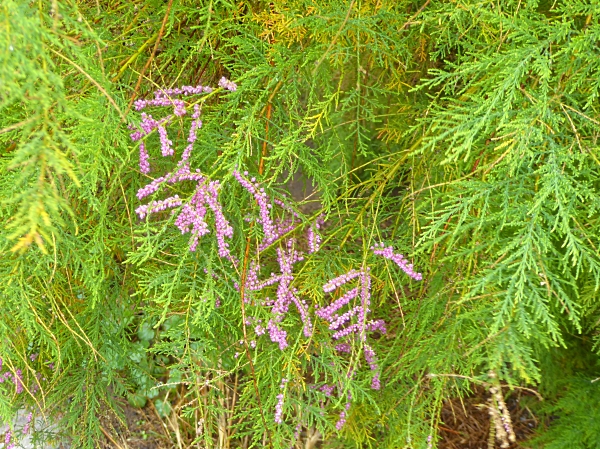 Then we headed back to the station up Deneshey Road. In this more sheltered spot there were interesting things in the gardens, including a False Acacia tree (Robinia), a Rowan with lots of red berries, a  purple Hibiscus and lots of fruits of the Japanese Rose Rosa rugosa. 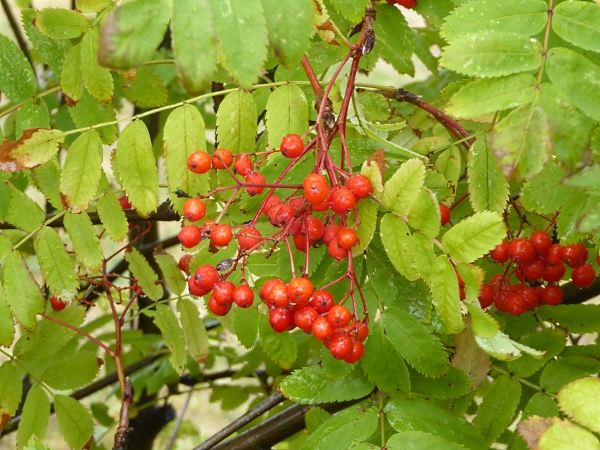 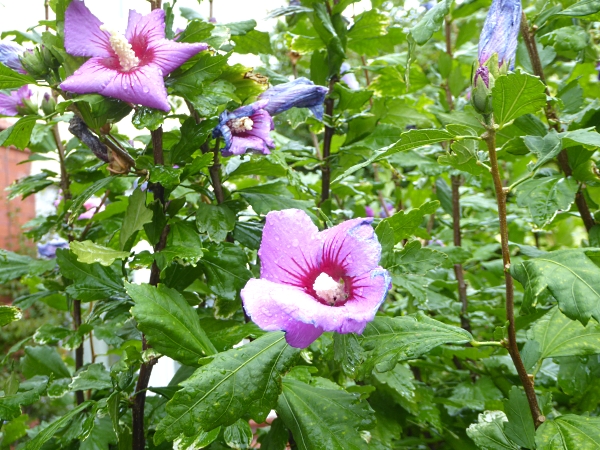 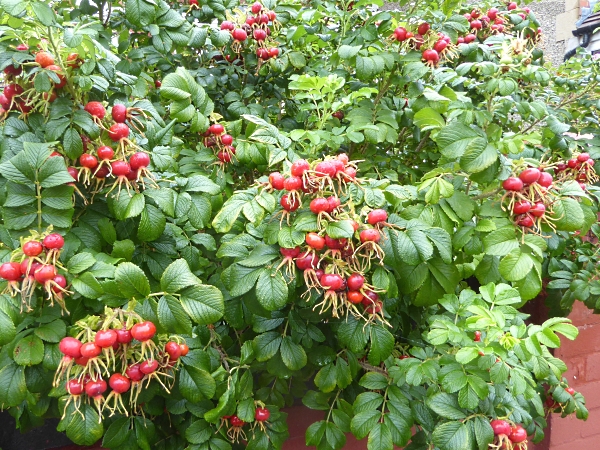