Yet another hot and sunny day, so we ambled slowly down Woolton Hill Road and Church Road, past the water tower on Reservoir Road. That’s the highest point in Liverpool at 292 feet (89 m). 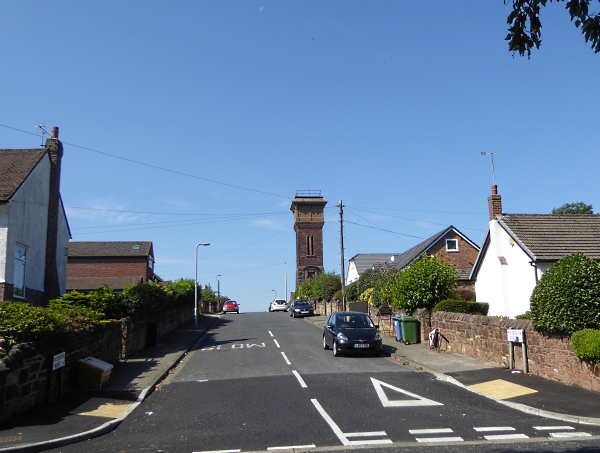 On that corner is a pair of old township boundary markers or “mere stones”. They are of unknown date, but probably ancient, and are now very hard to read. They show Much Woolton on the left and Little Woolton on the right. 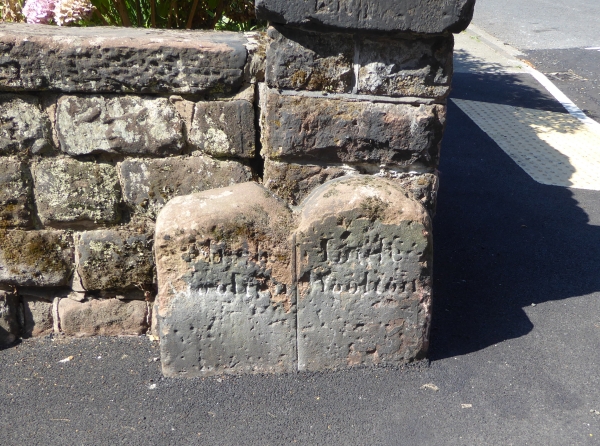 Reynolds Park in Woolton in south Liverpool was once the private 14-acre garden of the wealthy Liverpool cotton traders, the Reynolds family. The last owner gave it to the city in 1929 and it is now a very well-manicured little public park. There is a published tree trail, and we spotted many of their signposted trees as we went around – Common Walnut with lots of seeds, an elegant Black Walnut, some oaks and an Italian Alder. At the eastern end they have planted a wildflower meadow, and we noted Cornflower, Toadflax, Teasel, Ragwort, Corn Marigold, Bird’s Foot Trefoil, Ragwort, Wild Carrot and a new one on me, Sneezewort, also known as Bachelor’s Buttons. 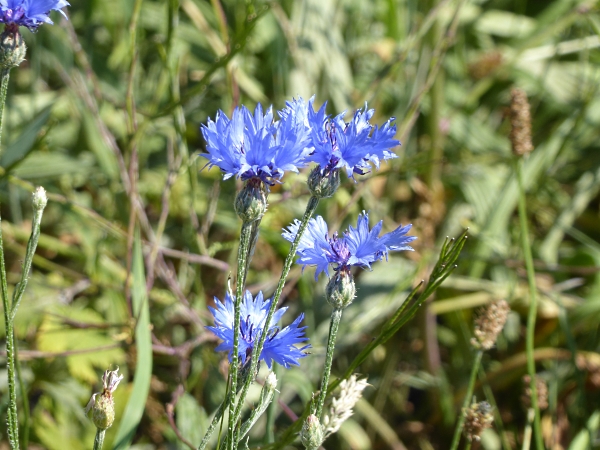 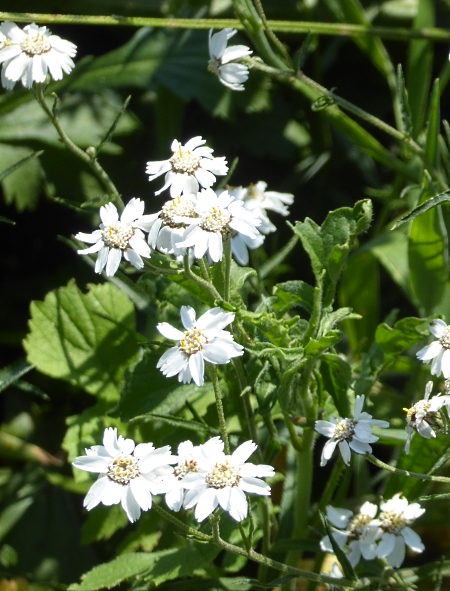 Several butterflies were flitting about over the meadow, including some whites, a probable Common Blue and this lovely Small Copper on a Ragwort. 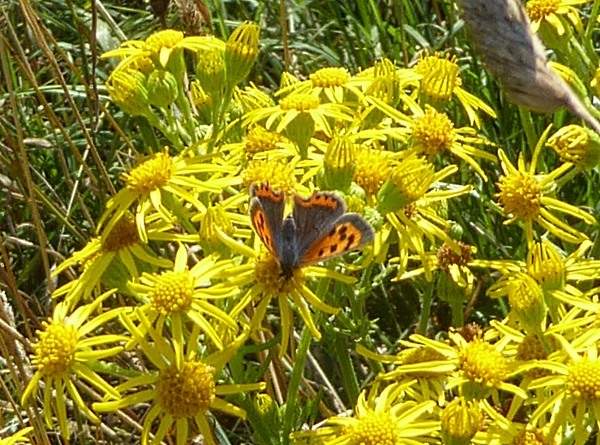 At the far eastern end are the splendid Queen’s Jubilee gates, installed in 2012 to commemorate the 60th anniversary of her reign. 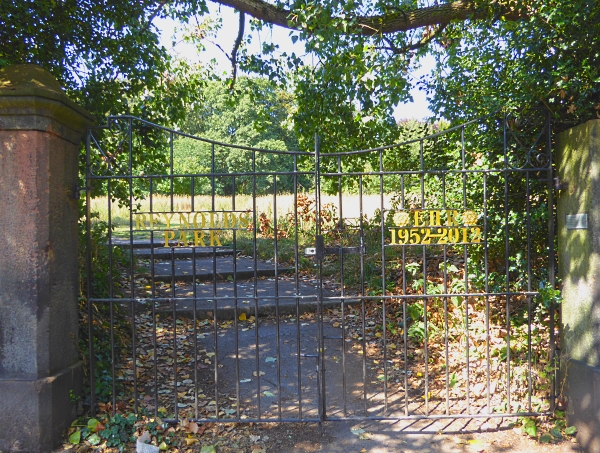 Overhanging the Jubilee gates is a big old Poplar tree. Is that a rare native Black Poplar, or the more common hybrid?  In 18th century France the Black Poplar met the American Eastern Cottonwood, and now there are very few pure Black Poplars left. The hybrid is said to be taller and straighter than the native, and this tree was definitely low and spreading, suggesting a native. The other distinguishing feature is that the hybrid has no burrs on its trunk. Sadly, we didn’t look that closely, so we can’t be sure which it is. 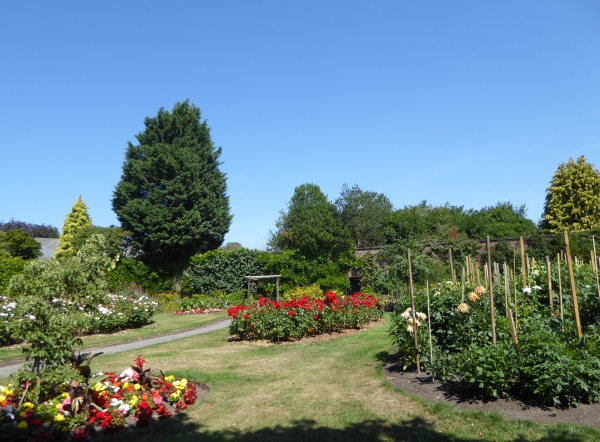 We lunched in the magnificent Walled Garden, a sun-trap of roses, dahlias and a colourful herbaceous border. There are several notable trees here, including a Tulip Tree, a Chinese Dogwood, a huge Judas Tree by one of the gateways and a young Indian Bean. Outside, on the sunken lawn below the ha-ha there is a collection of specimen trees, including several Sweetgum Liquidambar styraciflua and a wilting Persian Ironwood Persica parrotia. It is known for its magnificent bronze autumn colour, but it’s hard to tell if this one is just suffering from the drought or starting to turn for the autumn. 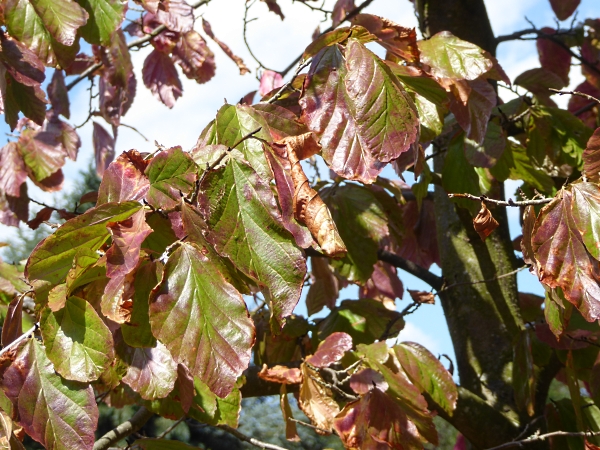 There was a young Pin Oak Quercus palustris in an upright cage. The leaf is obviously oak-like, but deeply indented with points or pins at the ends of the lobes. I’ve never seen or heard of an upright or “fastigiate” variety, as this one appeared to be, and there are none mentioned in my tree books, so maybe this one will grow outwards as it matures. 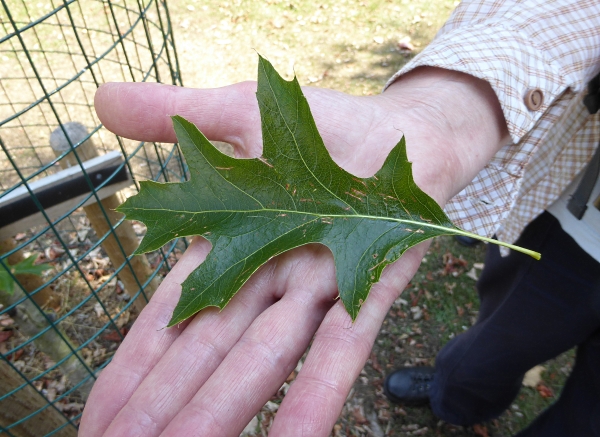 The final tree tick for the day was an Antarctic Beech Nothofagus antarctica, with tiny leaves about an inch (2.5 cm) long and seed cases only a quarter of an inch (7 mm) across. It appears to have fruited well in this hot summer.

Then we walked down Church Road to Woolton Village for the bus. We often see hordes of “Beatle” tourists about in Woolton, but there were none today.