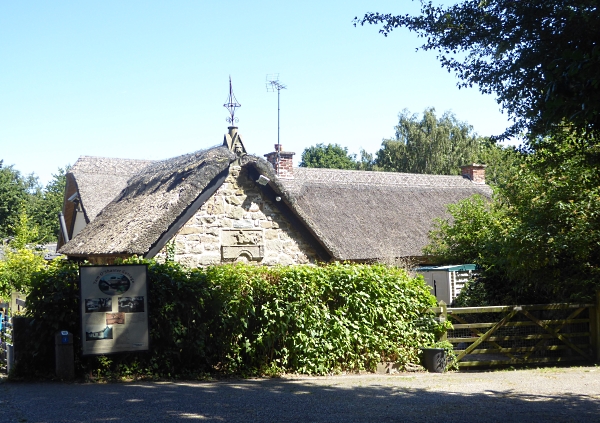 It’s been hot and sunny for several weeks, and we are apparently going through the longest dry spell since 1976. From the bus stop we walked through a shady woodland along King George’s Way. (King George V and Queen Mary opened the pathway to Bidston on Wednesday 25th March 1914, the same day they visited Port Sunlight.) The woods were oddly silent, with hardly any birds heard or seen. There was the odd cooing of Wood Pigeons, the distant cackle of a Magpie, the brief call of a Great Spotted Woodpecker and we found a blue barred Jay feather on the path. We saw only a pair of Dunnocks in a tree and a Gull flying lazily over a meadow. There were lots of Large White butterflies on the wing, though, and we have all seen plenty of them in our gardens. A large Dragonfly went past, possibly an Emperor. All the trees were looking droopy and parched, with the younger saplings shrivelling up to a premature autumn. The Brambles have set plentiful seed, but if there is no rain soon the blackberries won’t be able to swell. 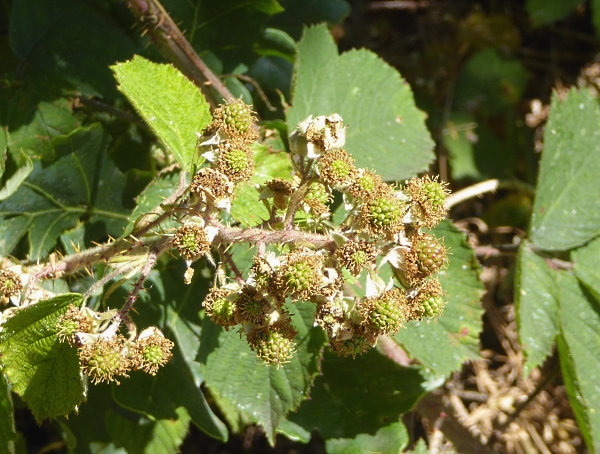 Tam O’Shanter Urban Farm started life as an old cottage, thought to be about 300 years old, built by a heath squatter. It was destroyed by fire in 1954 and 1975, then restored. Its name comes from a carving set into the wall showing Tam O’Shanter (from the Robbie Burns poem) escaping a witch by crossing water. 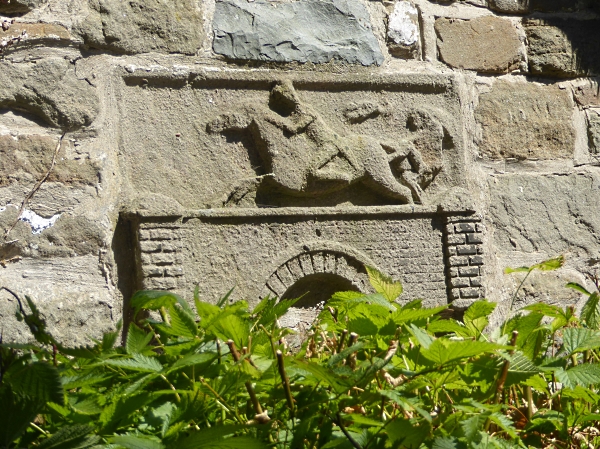 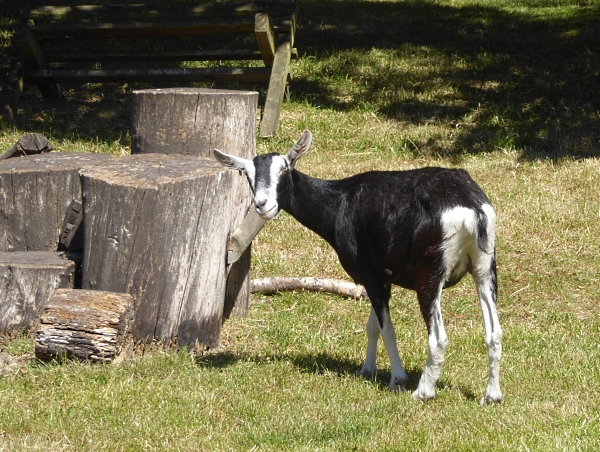 There is also a model cow with fake udders and a piped water system, designed to show children where milk comes from.  Not from bottles in a supermarket! 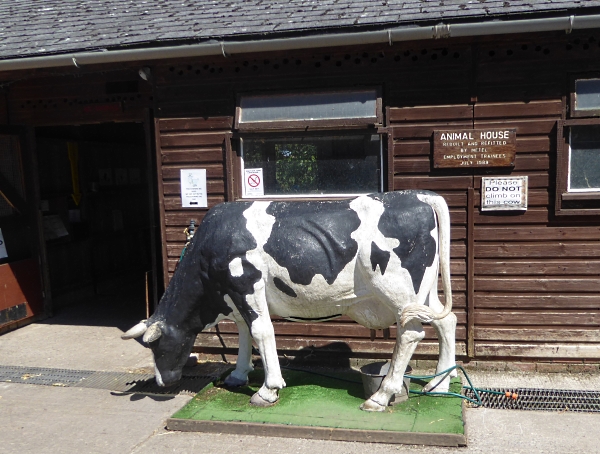 We lunched at their convenient picnic tables, where a Robin was hanging around for crumbs. Another of the farm buildings is an old Nissen hut, with an amazing white blossomy dome over it. It’s some sort of Rose, apparently, and this hot weather is really suiting it. 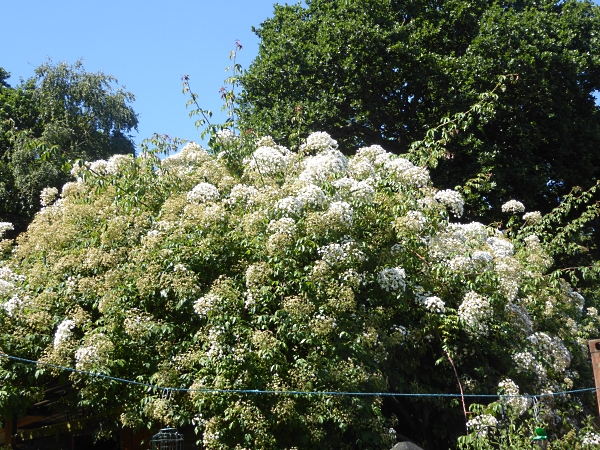 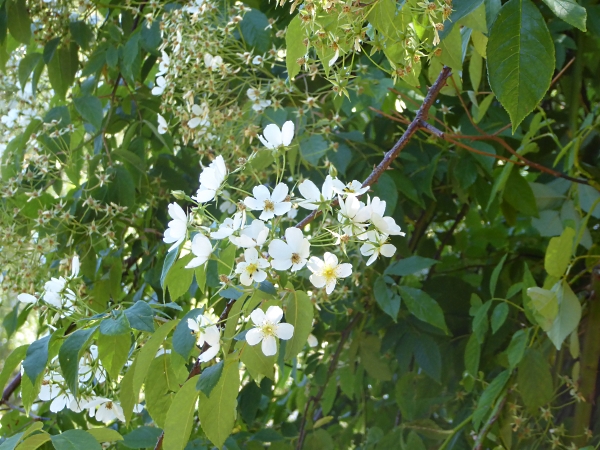 Flaybrick Memorial Gardens started life as a prestigious High Victorian cemetery for the merchant classes of Birkenhead. It was designed by Edward Kemp, a leading designer of parks and gardens, who was also responsible for Castle Park in Frodsham, Anfield Cemetery, Grosvenor Park in Chester, Newsham Park, Stanley Park and Hesketh Park in Southport. It is Grade II listed. 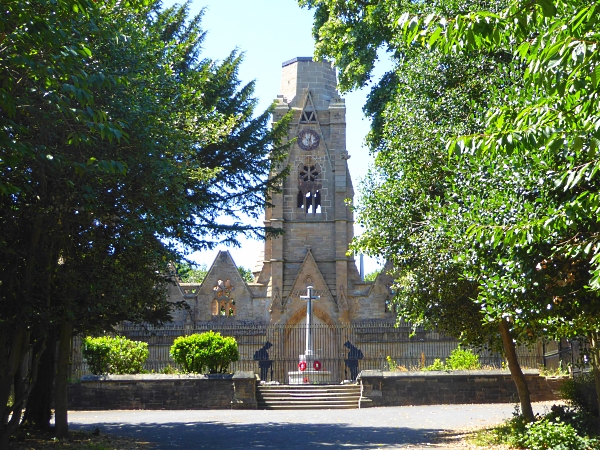 It is now treated as a nature reserve and has an active Friends group who have been planting interesting trees in the last few decades, turning it into a mini-arboretum. The current Conservation Management Plan has a guide to the trees in “Volume 4 Appendices“. Go to Appendix C, which has a comprehensive tree survey from page 29 onwards, with a useful map. We walked a different way than we usually do, heading towards the north end. We had a fleeting glimpse of a Comma butterfly. One of their signature tree species is the Silver Pendent Lime Tilia tomentosa ‘Petiolaris’, with many examples around the chapel end. One is the County Champion for girth. 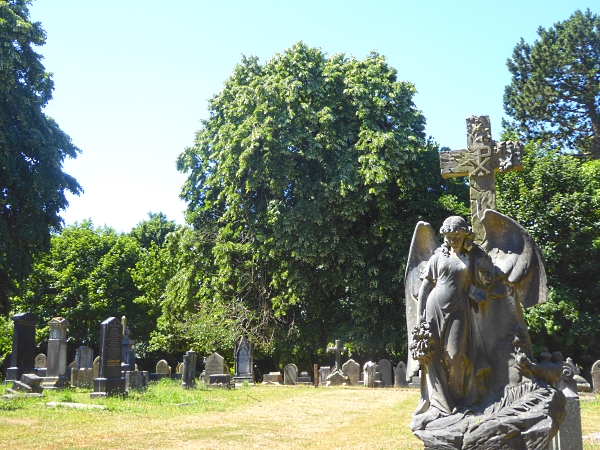 Other notable trees were several Pyramidal Hornbeams and the Pear tree which produces copious edible fruits later in the year. There were plenty of baby pears on the tree, but many had fallen and some were quite shrivelled up. 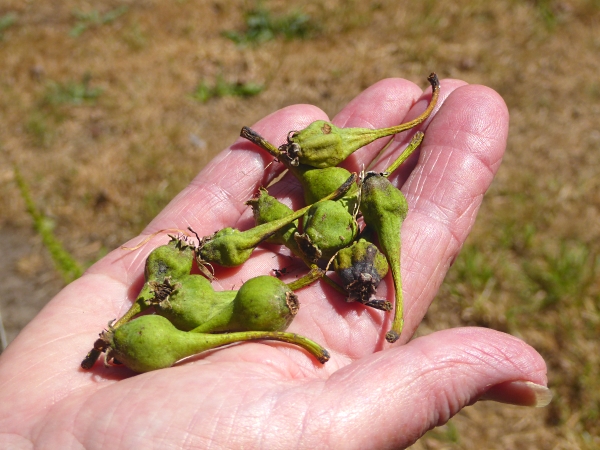 There is a rare Orange-berried Service Tree by a large war grave, a Champion Tibetan Cherry and a young Swamp Cypress. The pair of Cut-leaved Beeches at the main crossing have produced a bumper crop of small seed cases, but will the drought allow them to develop? 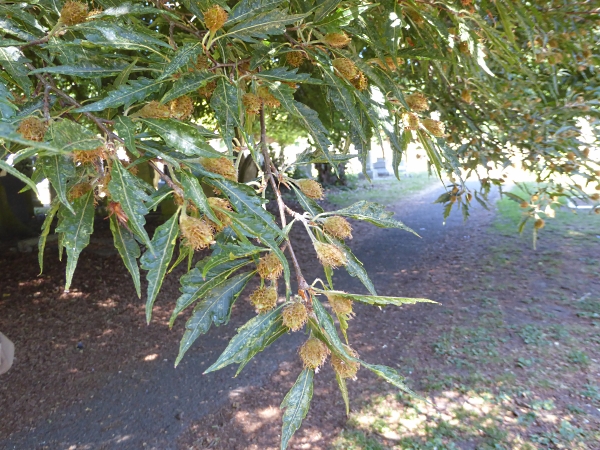 On the way home I had another look at the mystery tree in Queen Square next to New Look. I once  thought that it might be a Pagoda tree, but now I think it’s a Honey Locust Gleditsia triacanthos ‘Sunburst’. This week it was putting out stalks of small red flowers and some of them appeared to be developing into pods. 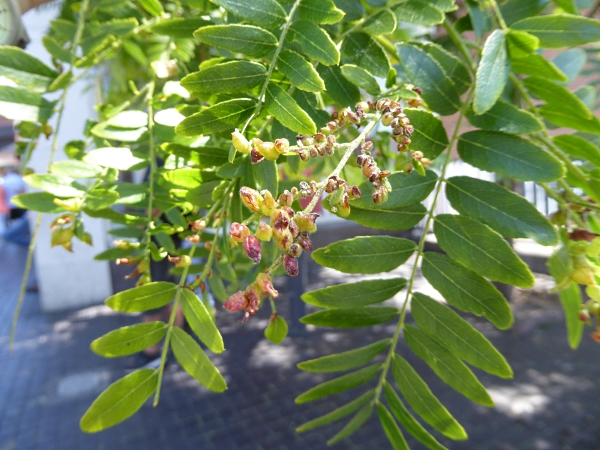 Liverpool buys new street trees from Barcham’s tree nursery, and I recently bought myself a copy of their catalogue, reasoning that any unidentified newly-planted tree in Liverpool ought to be shown in it. ‘Sunburst’ is a new variety of Honey Locust, with no spines, yellow young leaves and is said to do well in a hard-surfaced area with lots of glare. That sounds right, and we will be keeping an eye on the developing seed pods later in the year.