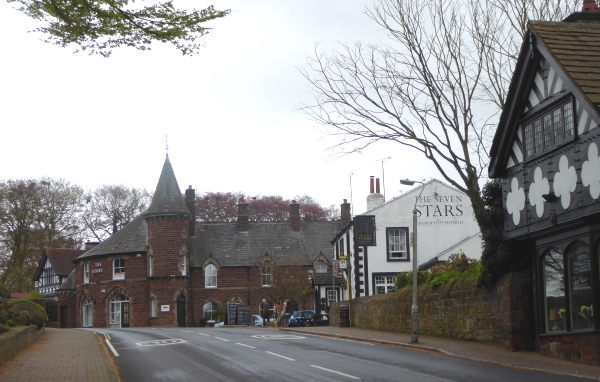 We have had several hot and sunny days (was that summer?) but it was blessedly cooler today. There was a heavy rain shower in the morning as I set out, but it held off for the rest of the day. We experimented with a different way today, because of impassable miry paths on our usual route. (Thanks, John, for the recce).  We still hoped to see some boxing Hares, though.

We got off the bus near Claremont farm and walked down Clatterbridge Old Road. All the hedges were bursting into bud or flower. The Blackthorn was out, as was the native wild Cherry. Buds were well-formed on the Hawthorn. Under the hedges the Garlic Mustard was just coming out and the Cow Parsley was nearly there. The much-derided Dandelions were putting on a splendid bright golden show. The trees were all on the go too, with Norway Maple putting out its froth of acid-yellow flowers and the young leaves of Copper Beech a wonderful bronzy red. 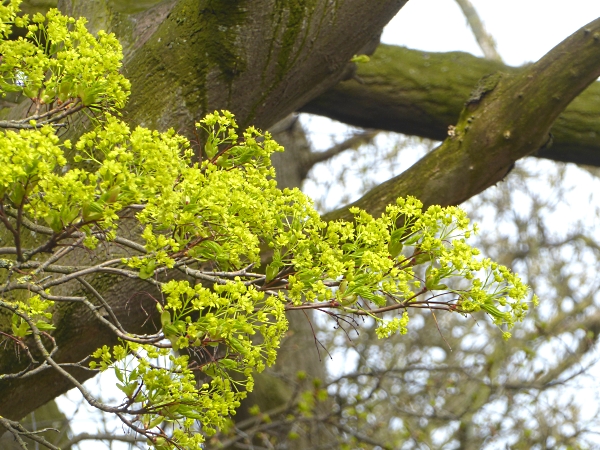 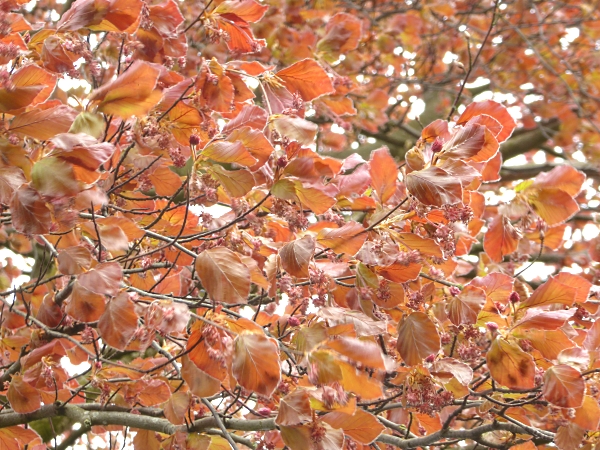 There was a Cock Pheasant in a ploughed field, and later we saw another flying over a hedge and clucking furiously. A Buzzard circled slowly overhead, and a group of a dozen or so little brown birds on a wire all went down onto the ploughsoil together. They were probably Linnets. A Blue Tit flew off from a tree hole, where it was probably nesting. There were early Bluebells by a fence, and Yellow Archangel and Green Alkanet in the grass. We crossed the motorway by the footbridge, walked around the Clatterbridge roundabout and took “Thomas’s Path” past Claire House. A male Bullfinch was on the path, but it flew off as soon as it saw us. We could hear it calling in the hedgerow but we didn’t see it again.  The gnarled Ash trees in the flailed hedge were putting out their new leaves and Wych Elm was in flower. 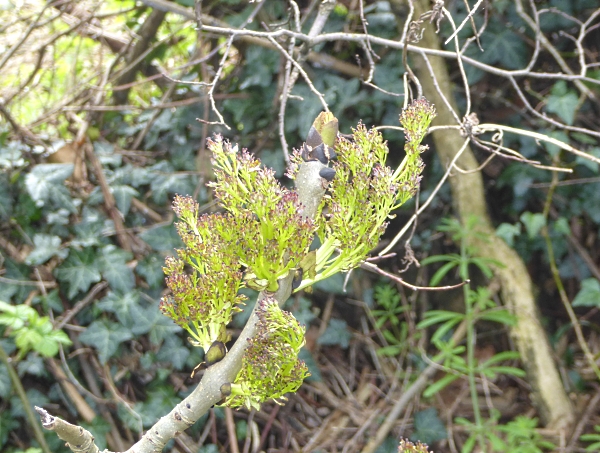 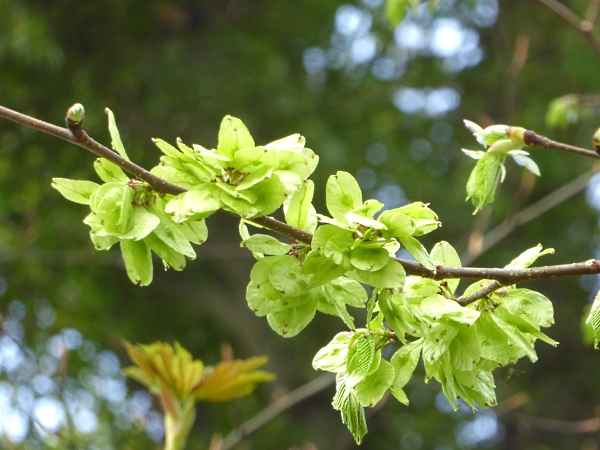 Back amongst the fields we noted clumps of Lesser Celandine and the new leaves of Field Maple. A fast-flying dark butterfly turned out to be a Peacock, then we saw a Small Tortoiseshell, and finally a male Orange Tip near the old black-wrapped hay bales and the abandoned farm machinery, where we lunched. There were dark clouds threatening so we soon pressed on. One recently-planted hedge had four or five young Oaks in it. They hadn’t leafed yet (oaks are usually late) and were still carrying last year’s dead brown leaves. We were amazed to see hundreds of Marble Galls on each of them. What an infestation!  We have never seen so many, clustered on the young trees like bunches of grapes. You would almost think the trees were dead, but they probably aren’t. They had a few different-looking galls on them, too. On last year’s twigs, just a few of the leaf buds had been turned into something that looked like seed heads.  None of the descriptions in “Oak-galls in Britain” by Robin Williams seemed to match and I wonder if the raggedy ones were old Artichoke Galls? 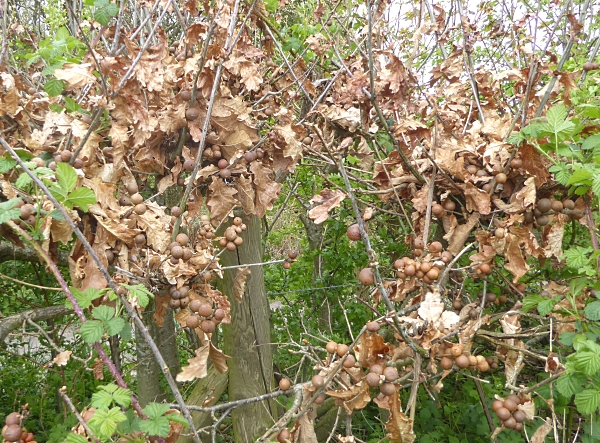 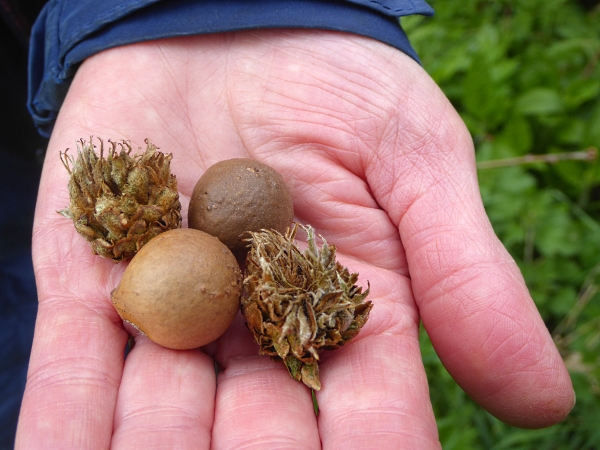 In the same hedge there were these lovely red buds, which were probably Crab Apple. 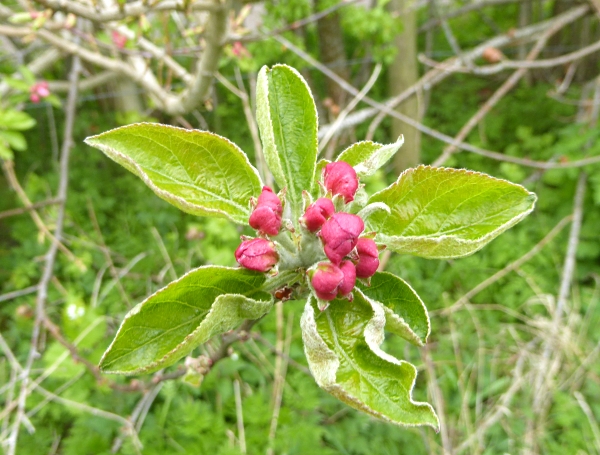 Many of the fields were full of the bright yellow flowers of Oil-seed Rape (Canola). 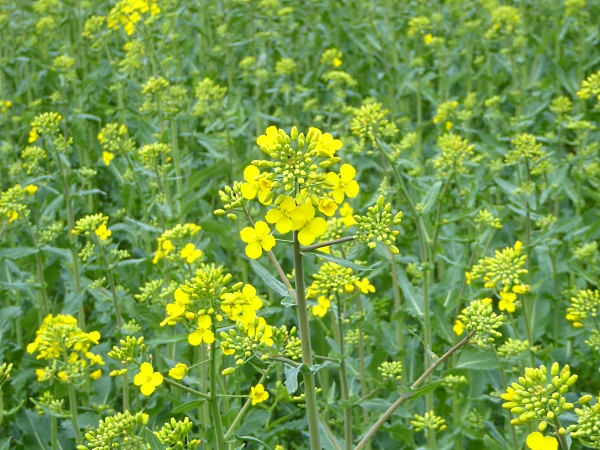 Under them were multitudes of Speedwells (probably Common Field Speedwell) and the occasional Common Fumitory. 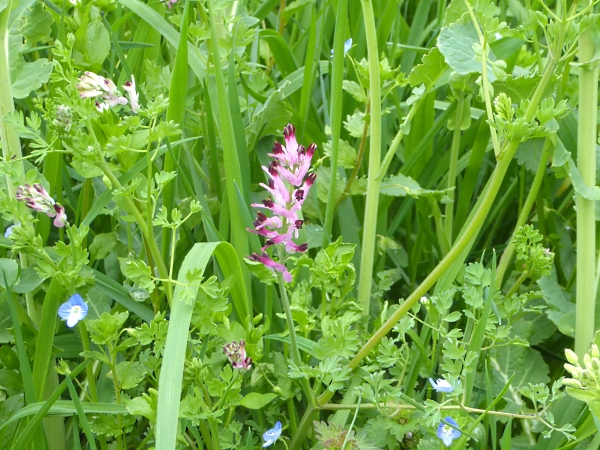 Around the farm (Rocklands farm?) there are several interesting ornamental trees over the hedge, including a Himalayan Birch with bright white bark and long dangling catkins, a Copper Beech and a Cedar, which might just possibly have been a Cedar of Lebanon, but we weren’t able to get near enough to be sure.  We came out onto Thornton Common Road at Crofts Bank Cottages and headed down the road into Thornton Hough village. John and Margaret looked into a field hoping for Hares (no luck with them at all today) and spotted two Red-legged Partridges. We admired the huge Monkey Puzzle tree at the entrance to the village. Then, to our surprise, four vintage buses came along and waited outside the Post Office until a fifth old bus came along to join them. Then they headed off towards Neston. What was that about? 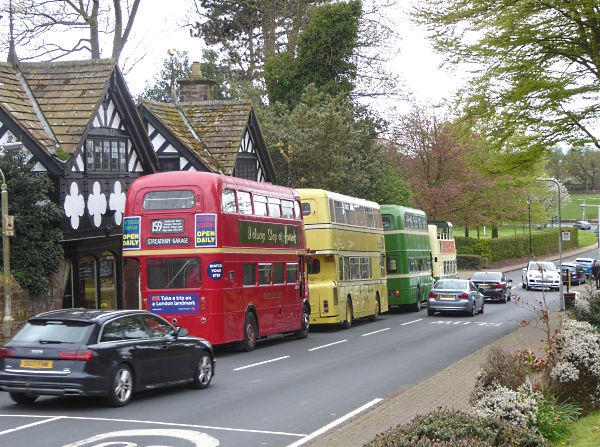 Some of us got the 1.45 bus back to Liverpool, while the rest of us stayed for a further hour. We headed up past the school towards Grange Lane, where I was sure I had seen a Japanese Larch last year. Blow me! It wasn’t where I remembered it and we couldn’t find it at all. We did see a Collared Dove on the ground though, a Song Thrush rootling about by the side of the path and some Rooks in the rookery beyond the corner shop called “The Store” (see top photo). In the churchyard was a Deodar Cedar, a lovely small Weeping Cherry bearing pink blossom and a young Whitebeam with upright leaf buds like magnolia flowers. 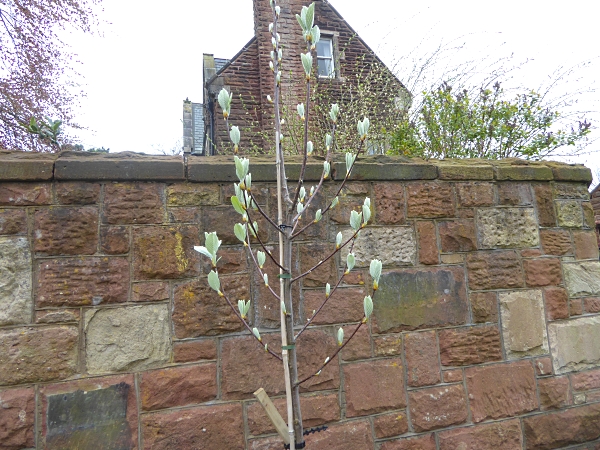 On the way back on the bus we looked out for two marvellous garden trees that we had spotted on the way out.  One was a Sycamore of the variegated pink-and-cream variety ‘Brilliantissimum” which at this time of year was a mound of new leaves that looked rather like a delicious fruity dessert. It is in Bebington near the junction of Heath Road and Abbot’s Drive. The other was a grafted Cherry which had both red and white blossom on the same tree. It was on Brimstage Road, near the junction with Beechway.

I was determined to photograph a Japanese Larch in flower, and there is one in Alexandra Park in Crosby. I had a look at it on the way home. Here are its amazing little inch-tall female flowers (2.5cm), like crimson fireworks. The commoner European Larch will be doing the same thing at the moment, so keep your eyes open for one. Its flowers are a deeper red and the foliage is a darker green. 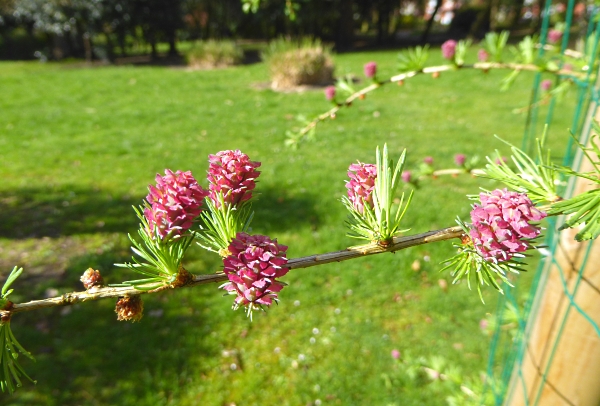 I also went to check on the Crosby Foxglove Tree that was blooming this time last year. (Follow that link for last year’s post, which says where the tree is.) Although the book says they oughtn’t to flower until late May, last year wasn’t an aberration for this early tree, and it’s just coming into flower again. Alas, it seems to have suffered from the prolonged winter, and the flower spikes bear disappointingly few blooms. 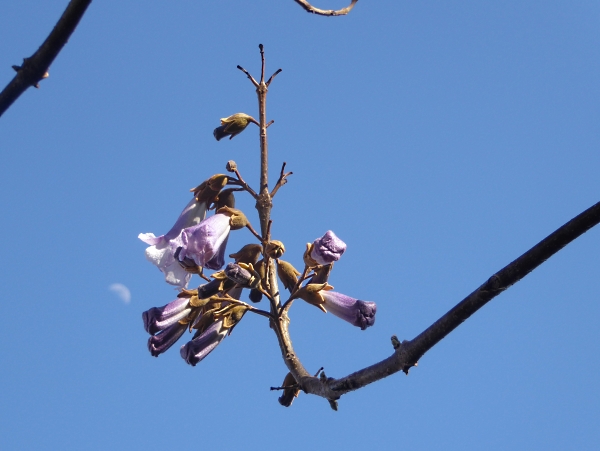 Public transport details: Bus 487 from Sir Thomas Street at 10.29, arriving Brimstage Road / Clatterbridge Road at 11.02. Returned on the 487 from the stop opposite the Seven Stars pub at 2.45, arriving Liverpool 3.25.