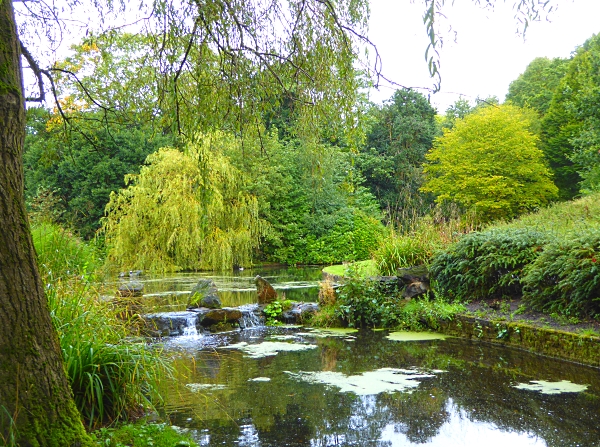 The Model Boat Club meets at Sefton Park every Sunday morning, even in misty drizzle like today. 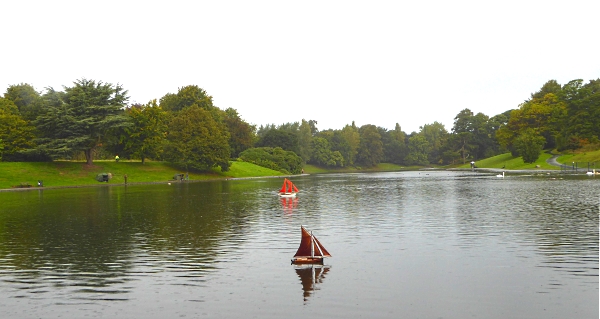 The usual birds were on the lake, Mallards, Coots and Moorhen, Canada Geese and Mute Swans. There seemed to be a lot of cygnets, which at this time of the year are full-grown but still fawny-grey. Later we were able to see there were NINE of them, a very good brood indeed! One pair of Moorhen appeared to be sitting on a nest, which will be a very late brood if the eggs hatch. Several Little Grebes were diving, a Great Crested Grebe was bathing itself, and there was a single Pochard.  A Grey Wagtail pottered about on the edge. 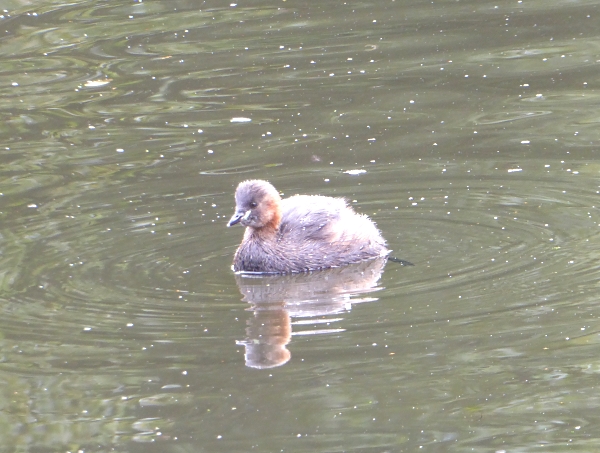 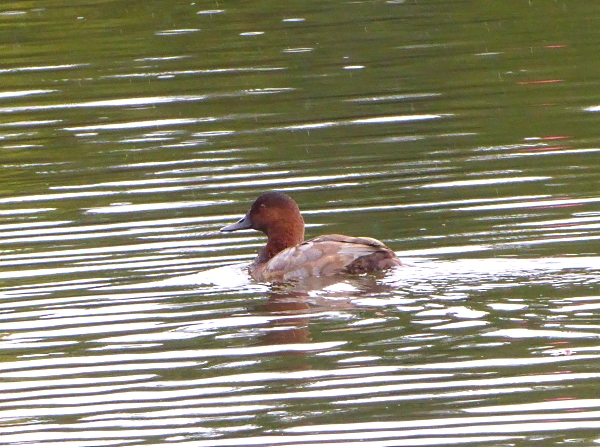 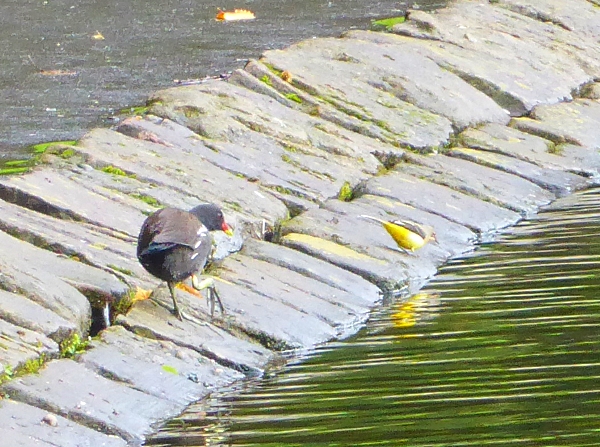 There were some large clumps of late-flowering Black Nightshade in the shrubbery on the west side of the lake, a plant we don’t see very often. There are several old Sweet Chestnut trees along that side of the lake, which are having a very good year for fruit. The trunks were very thick and gnarly, and showed marked spiral ridges. Could they be as old as the park? It was founded in 1872, so they might be 145 years old. 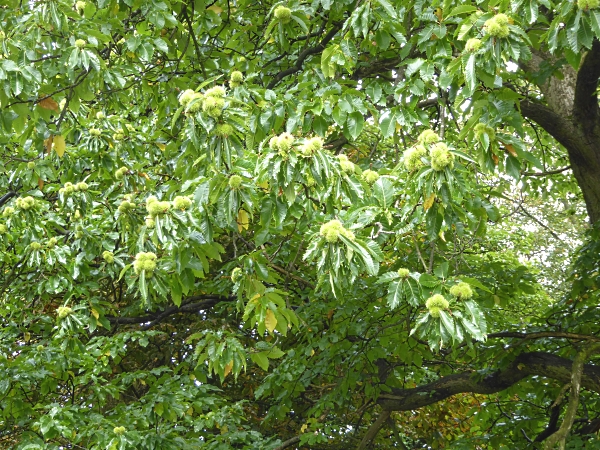 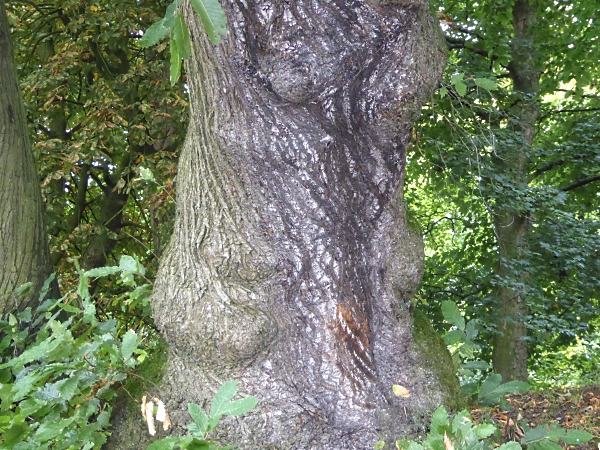 There are other splendid trees between the north end of the main lake and the “Oasis in the Park” café. There is a cluster of Narrow-leaved Ash Fraxinus angustifolia ‘Raywood’ on the grassy slope, which haven’t yet come into their autumn glory of purple and gold. One of them is the Lancashire County Champion for girth at 234cm, (7’ 8”).  Along the waterside verge are some wonderful old Cherries, and opposite the bandstand is a Black Walnut Juglans nigra, which is the Lancashire County Champion for both girth (270 cm, 8’ 10”) and height (20 m, 65 feet). Large fruit were falling, so it was rather reckless to have a park bench sited right underneath! 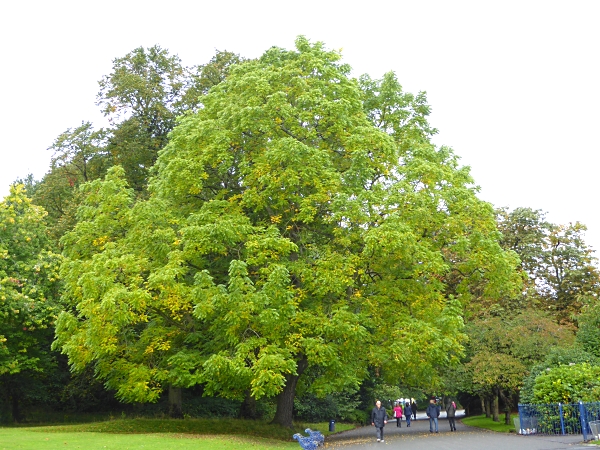 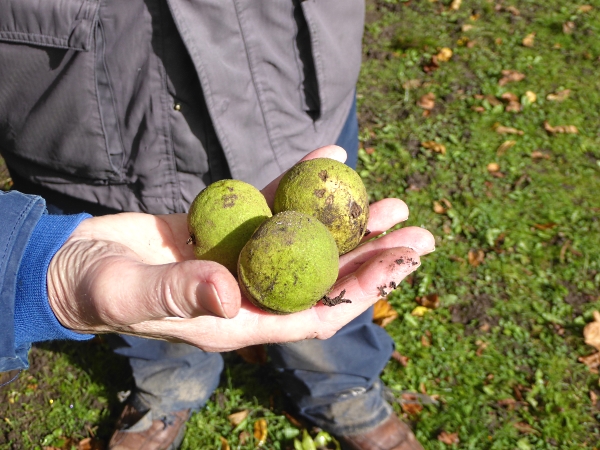 Today was the Food Festival and part of the northern field was fenced off. We could see lots of  marquees, music was playing and some interesting barbecue scents wafted our way, but we determinedly avoided it.  We hoped to see the Kingfishers which seem to have taken up residence north of the café, but the water was completely covered with green algae, so they had clearly gone off to a better fishing area. Autumn colours were just starting on some trees, including a Red Oak, and this one that looks like some sort of Maple. 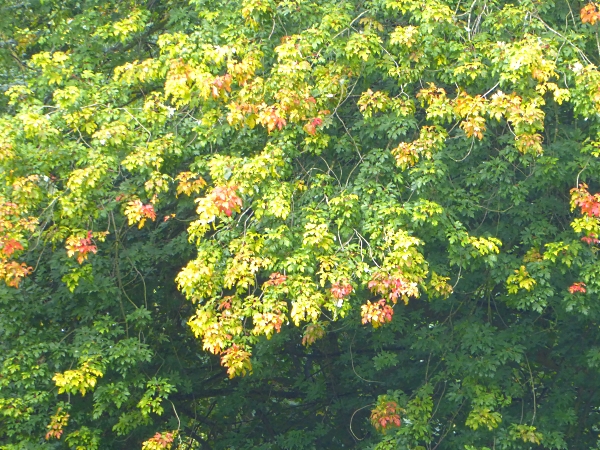 We were stopped by a lady who had taken charge of a lost dog and was searching for its owners. Its tag said “Ozzie” and gave two mobile numbers. We rang them both for her, and texted one of them,  without success. Later we heard that she had met someone who knew Ozzie’s owners. Good, he was a lovely, friendly, trusting dog. 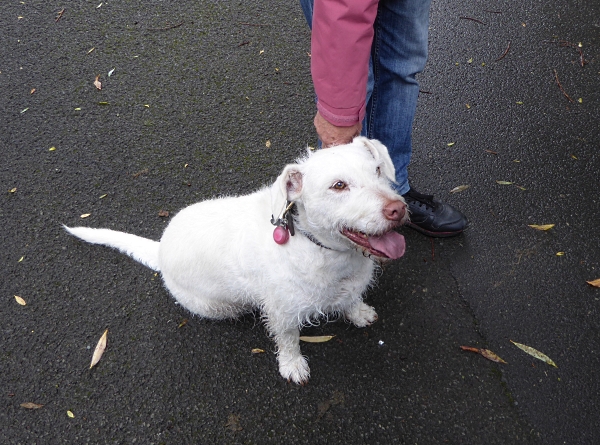 We lunched on the seats near the aviary, where there was a Large White butterfly visiting the flowers, now that the sun had come out. One of the flowers was Golden Rod, looking more like the native wildflower, so I think we will claim 15 I-Spy points for it, despite it probably being a cultivated variety.  That takes us to 1100. 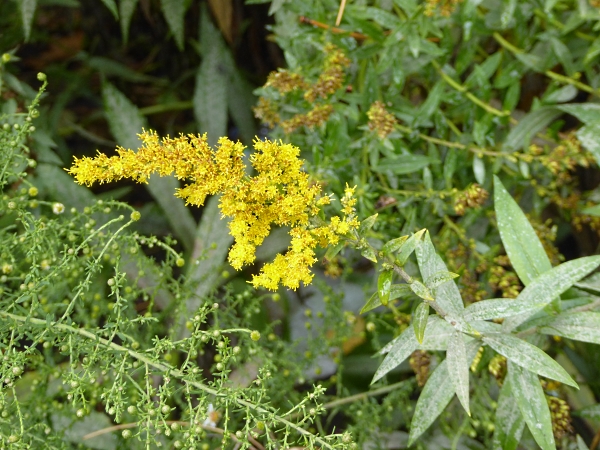 Just on the corner of the aviary is a tall Indian Bean tree, which I hadn’t noticed before. They are easy to spot just now, because their big leaves are turning uniformly yellow. There was a shrub of the Physalis type, but as there are up to 90 species I have no idea which one it was. They are variously known as Chinese Lanterns, Ground Cherry or Cape Gooseberry. 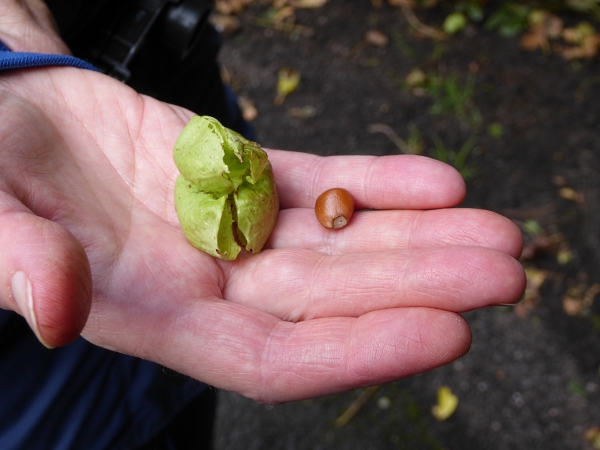 A young tree on the corner attracted our attention. It had very big leaves and bore the remains of an upright multiple flower head. It was a Foxglove Tree!  That’s only the fifth one we know on Merseyside. 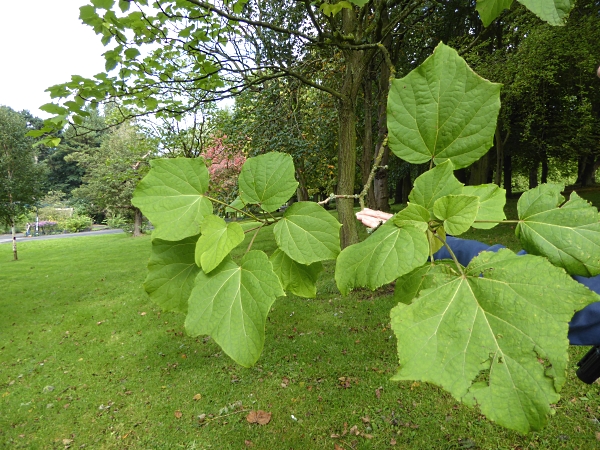 We looked in the Dell for the Kingfishers, but they weren’t there either. We noted the good trees there, Liquidambar, Deodar, Cut-leaved Beech and a Tulip Tree. Then we had a very brief glimpse of a Treecreeper. Hooray! That’s one of the few outstanding birds on our I-Spy list, the first new bird on that list since 11th June, worth 30 points and taking us to 1315. The only realistically possible bird left to tick in that book is a Bullfinch, and we haven’t given up hope yet. Then up to the Ring-necked Parakeet feeding station. They use a tree stump as a fruit table, and today it had half a melon and a broken-up coconut. A big Rat and several Grey Squirrels mooched on the ground below, a Jay watched us from a branch overhead and a Great Spotted Woodpecker drummed in the distance. Then we heard the characteristic squawk and a Parakeet flew in and perched over the melon. 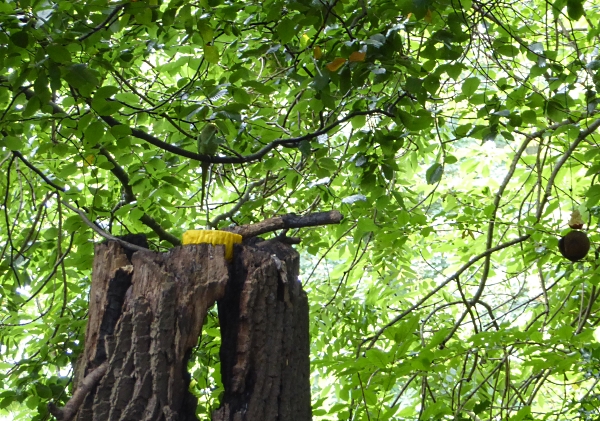 At the top of the steps leading back down to the main lake is a tree with long strings of hanging seeds. It’s a Caucasian Wingnut Pterocarya fraxinifolia. 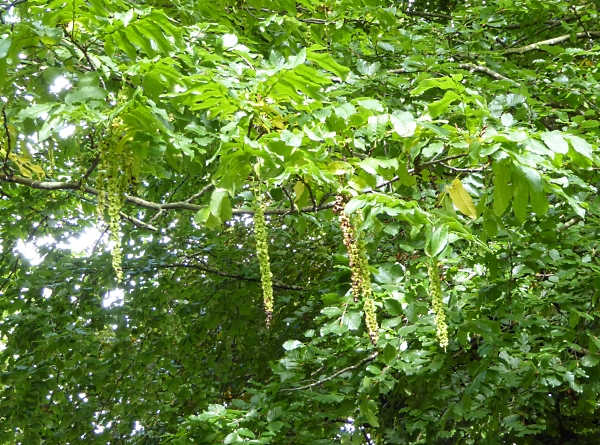 The rarest tree we saw today is a little sapling with huge leaves, on the bank opposite the island. I think it’s a Butternut Juglans cinerea which in my old Mitchell field guide is described as “Very rare, a few collections and gardens in S England, S Scotland and Ireland.” I saw one in Edinburgh Botanic Gardens last year and was impressed by the huge compound leaves, 60cm (2 feet) long, almost dwarfing the tree. Even the leaflets are about 15cm (6 inches) long. I asked John to lean in and grab a leaflet on this little tree to show the scale. From his hand into the trunk is one leaf! 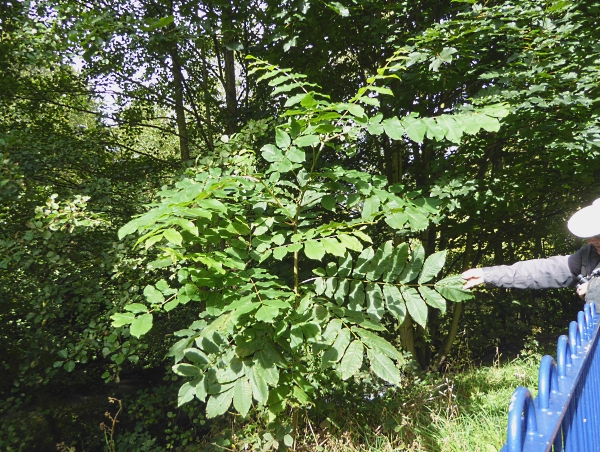 Back at the lakeside we noted a large light-coloured fish near the surface of the water, easily a foot long. There was a fast-moving butterfly, perhaps a Comma, or possibly a Small Tortoiseshell. One Coot had coloured leg rings, left yellow over orange, right light blue over a BTO. This study was done several years ago, so this must be quite an old bird. I have sent the sighting to the BTO via the Euring website.  [Reply from the BTO 19th September: “This bird was ringed as age 1st year, sex unknown on 28-Aug-2011 Redes Mere, Siddington, Cheshire, UK, OS Map reference SJ8471.” So it is now six years old and ours was the first-re-sighting since it was ringed.]
The Mute Swan cygnets were flapping vigorously in a circle. The father of this huge brood was standing on the bank. He had a blue Darvic ring on his right leg, XA6.  We saw him here in early 2014. I have sent the sighting to the North West Swan Study. 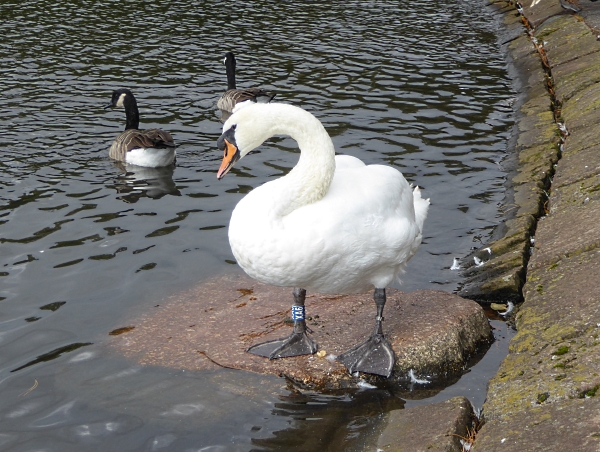 Public transport details: Bus 82 from Liverpool ONE bus station at 10.03, arriving Aigburth Road opposite Ashbourne Road at 10.23.  Several returned on the 68 from Aigburth Vale, others got the 82 at Aigburth Road / Jericho Lane, arriving City Centre 2.48.