Late July saw Harry Standaloft, Ron, DaveB and I visiting Minera Quarry to indulge in the rare and threatened wildlife and plants this specialist limestone grassland and wooded area has on offer. After disembarking at the village triangle we wandered down to the River Clywedog which despite recent heavy rains was barely a trickle. An energetic Grey Wagtail was frantically bobbing and chasing after insects along the river edge to feed its fledgling that was sat expectantly on a rock in the shade. We turned into Ty Brith Ln and through the gate onto the track leading through umbellifers including Rough Chervil Chaerophyllum temulum, Alexanders Smyrnium olusatrum, Pignut Conopodium majus, Yarrow Achillea millefolium and flowering plants such as Field Bindweed Convolvulus arvensis, Common Centaury Centaurium erythraea, Hedge Woundwort Stachys sylvatica, Wood Sage Teucrium scorodonia, Selfheal Prunella vulgaris, Harebell Campanula rotundifolia and Common Knapweed Centaurea nigra. Red Campion Silene dioica was suffering from a smut Fungus Microbotryum silenesdioicae which infects the anthers of male flowers causing them to become black. 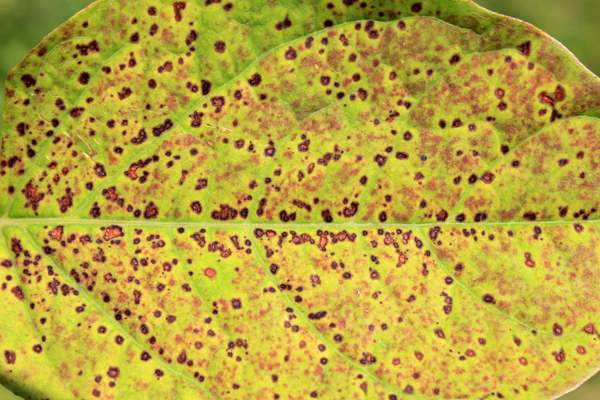 The leaves of Japanese Knotweed Fallopia japonica were suffering from Leaf Spot Fungus Mycosphaerella polygoni-cuspidati. This Fungus along with the sap sucking Insect Aphalara itadori are being used as potential control agents to this Invasive Plant. We chased after the first Butterflies of the day with Small Skipper Thymelicus sylvestris, Red Admiral Vanessa atalanta, Gatekeeper Pyronia tithonus, Meadow Brown Maniola jurtina and Ringlet Aphantopus hyperantus. 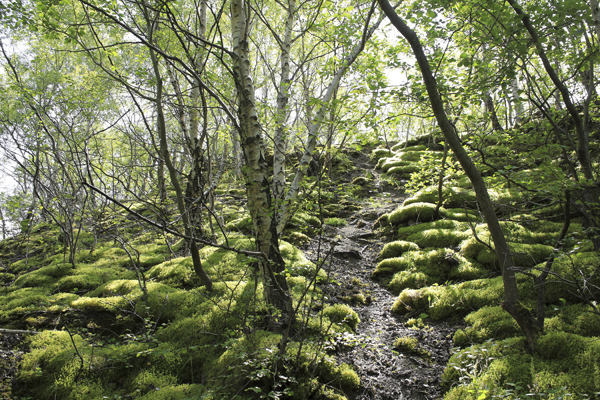 A detour through the woodland growing on the old lime slag heaps was productive with Common Twayblade Neottia ovata, Pyramidal Orchid Anacamptis pyramidalis along with numerous spikes of Broad-leaved Helleborine Epipactis helleborine. 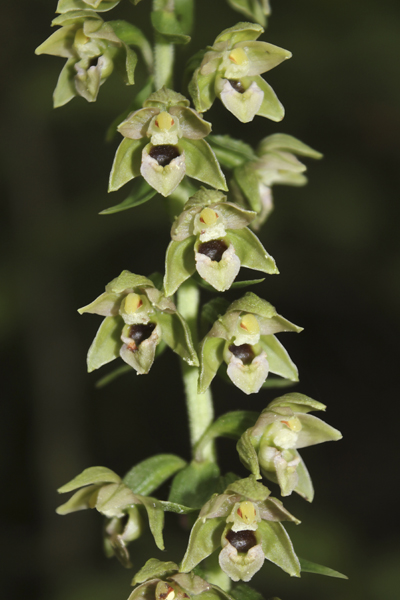 Dappled sunlight backlighting the Moss cushions below the Trees was magical indeed. Further along more magic where rainwater had flowed through the limestone dissolving then re-precipitating the calcite present as stalagtites – whose name is traced back to the Greek word ‘stalassein’ which means ‘to drip’. This mini grotto held a number of fairies, angels and a somewhat incongruous Pterodactyl! 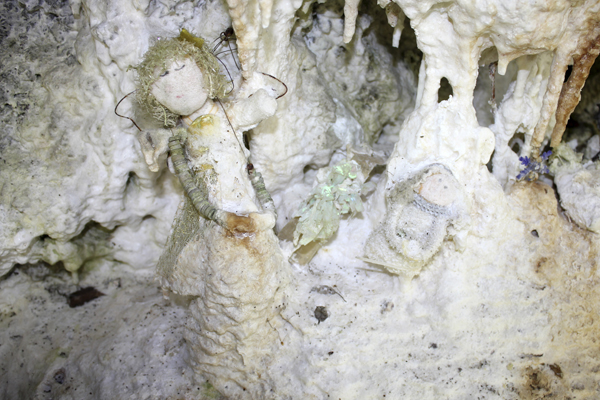 Dave noticed a single stalk of Round-leaved Wintergreen Pyrola rotundifolia arising from four shiny basal leaves. Unfortunately the white flowers had not yet opened from their round buds.

We watched a pair of Spotted Flycatchers that had nested this year at the old Quarry buildings. Nearby the tall candle-like flower spikes of Great Mullein Verbascum thapsus lay collapsed on the ground and a clump of the hemi-parasitic Red Bartsia Odontites vernus was stealthily gaining nutrition from the roots of grasses. 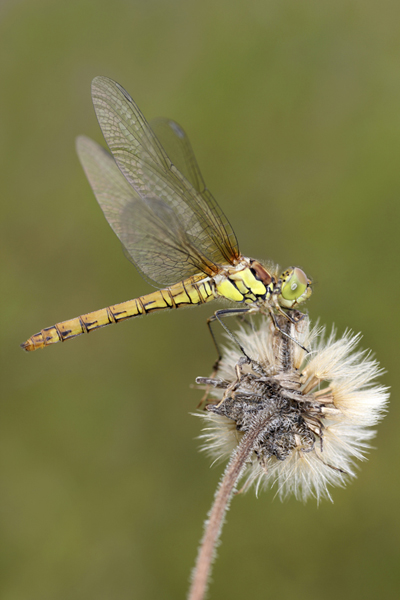 A couple of Graylings Hipparchia semele were basking in the sunshine on a scree slope, with the native perennial Field Scabious Knautia arvensis flowering on a ledge above. We climbed the path through woodland noting the juicy fruits of Wild Strawberry Fragaria vesca and the rounded achenes with feathery hooked styles of Wood Avens Geum urbanum as well as yet more flowering Broad-leaved Helleborines. We entered the gate through to a wildflower bank over-looking the main Quarry complex. Flitting amongst the Salad Burnet Sanguisorba minor, Common Milkwort Polygala vulgaris, Eyebright Euphrasia officinalis and Lady’s Bedstraw Galium verum were three female Silver-studded Blues Plebejus argus along with Small Skipper Thymelicus sylvestris, Ringlet Aphantopus hyperantus and Small Heath Coenonympha pamphilus. 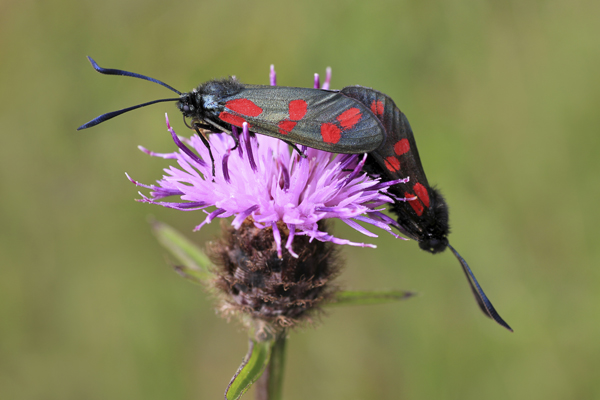 We ate lunch beside the small pond fringed with Marsh Horsetail Equisetum palustre and Lesser Spearwort Ranunculus flammula. Twenty or so Water Boatman a.k.a. Backswimmer Notonecta glauca were floating at the surface of the water – a lone Tadpole was certainly doomed. Odonata included Emerald Damselfly Lestes sponsa, Azure Damselfly Coenagrion puella, Blue-tailed Damselfly Ischnura elegans, Migrant Hawker Aeshna mixta and Common Darter Sympetrum striolatum.  The shrill ‘kee-kee-kee’ of the nesting Peregrines echoed around the Quarry accompanied by the ‘chack of Jackdaws and the throaty ‘crrrawk’ of a Raven. 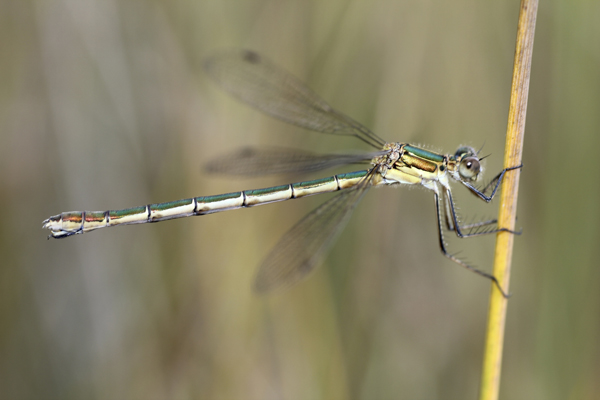 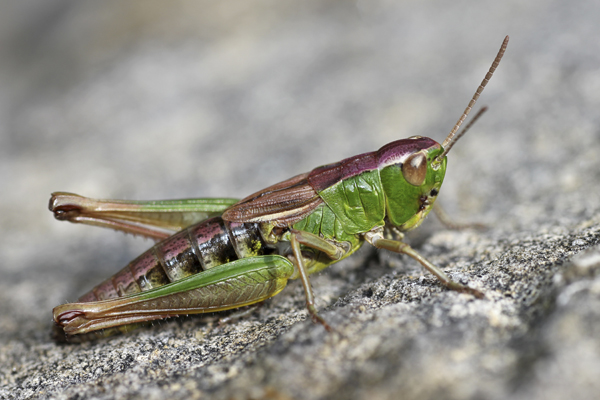 We wandered across the Quarry’s grassland amazed at the number of Autumn Gentians Gentianella amarella – unfortunately not yet in flower but whose reddish stem with opposite pairs of narrow pointed leaves made it quite prominent. We noted quite a number of mating Six-Spot Burnet Moths Zygaena filipendulae, a few male Common Blues Polyommatus icarus, boinging Meadow Grasshoppers Chorthippus parallelus and Red-tailed Bumblebees Bombus lapidarius one of whose pollen basket or ‘corbicula’ on the tibia of the hind legs was bright red in colour. Harry spotted a small caterpillar on a Rush Juncus sp. stem – the host plant of the Sawfly larvae Dolerus ferrugatus. 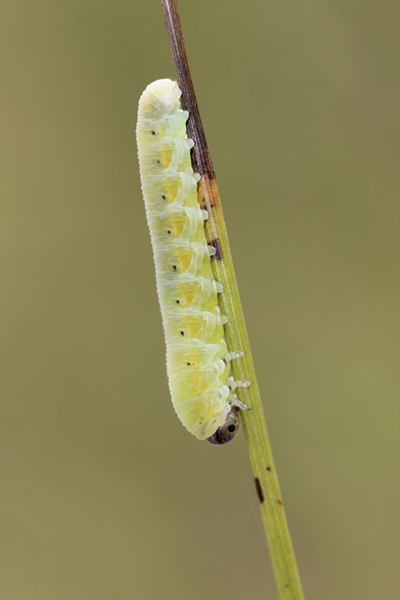 We met a couple of naturalists from the North Wales Wildlife Trust who told us that after many years of negotiations Tarmac, Minera Quarry’s current owners are signing the contract to transfer the land to the Wildlife Trust. This will allow better management of the site including scrub clearance and controlled grazing as well as improving access with nature trails and community engagement events. They were excited with our sighting of the Silver-studded Blues – possibly a first for the site. We bumped into them again back at the pond where they had seen Large Red Damselfly Pyrrhosoma nymphula and Scarce Blue-tailed Damselfly Ischnura pumilio whose status is near threatened on the GB Red List. The species was considered almost extinct in Britain at the turn of the 19th Century but has recently been undergoing a period of range expansion. They also showed us a couple of Southern Hawker Aeshna cyanaea exuvia. 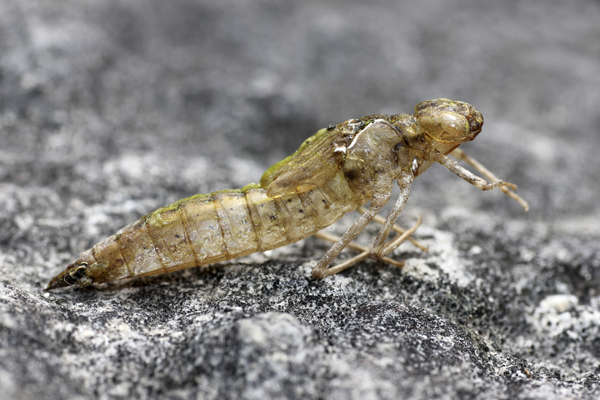 On the return walk Ron spotted a furry caterpillar crawling across the path that was dark brown with light orange bands along the body. It was later identified as an early instar Fox Moth Macrothylacia rubi. When fully grown later in the year the caterpillar will hibernate in readiness to complete their pupation the following spring. 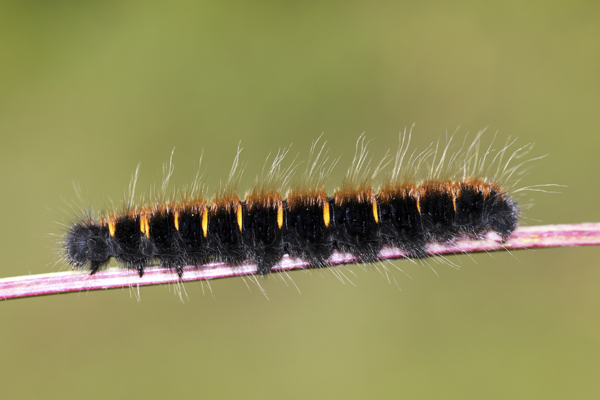