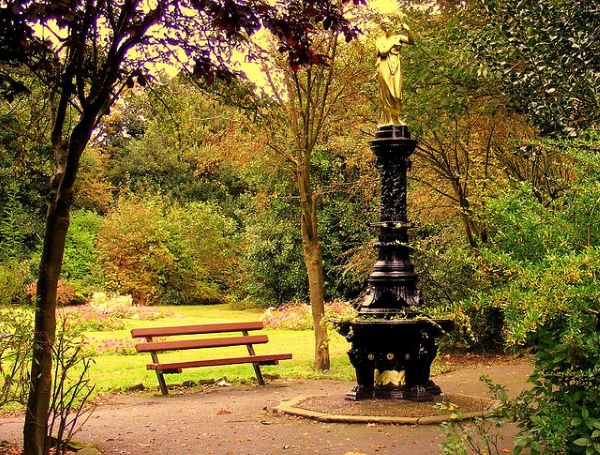 On the hottest day of the year we took refuge in the cool, shady tranquilly of Alexandra Park in Crosby. (The picture above is a 2009 autumn picture “borrowed” from Flickr.)  The park was opened in December 1902, just scraping into the year of Queen Alexandra’s coronation. It was designed as a place simply for promenading in big hats, with no bowling greens or football fields. Unfortunately, this means that very many of the original trees could now be 115 years old, dominating the canopy, and coming to the end of their lives. Nothing appears to have been done about succession for many decades, but kudos are now due to Sefton Council who have embarked on a project to gradually replace the old trees with very interesting younger ones. Following their receipt of almost £75,000 from a pot of “Section 106 money” (money that developers of larger sites pay to the council to reduce the impact of the development), they have been planting some well-grown young trees of unusual varieties. The list includes Hybrid Red Maple Acer x freemanii ‘Autumn Blaze’; Paperbark Maple Acer griseum; Cut-leaved or Fern-leaved Alder Alnus glutinosa ‘Imperialis’; Swedish Cut-leaved Birch Betula pendula ‘Dalecarlica’; Katsura Cercidiphyllum japonicum; Judas tree Cercis siliquastrum; Japanese Larch Larix kaempferi; Pin Oak Quercus palustris; Henry’s Lime Tilia henryana; Golden Smooth-leaved Elm Ulmus carpinifolia ‘Wredei Aurea’; Snowy Mespil Amelanchier arborea ‘Robin Hill’; Manchurian Cherry Prunus maackii ‘Amber Beauty’; Bird Cherry Prunus padus ‘Watereri’; two varieties of Flowering cherry Prunus ‘Accolade’ and Prunus “Amanogawa”  and a row of Laburnum Laburnum x watereri ‘Vossii’. 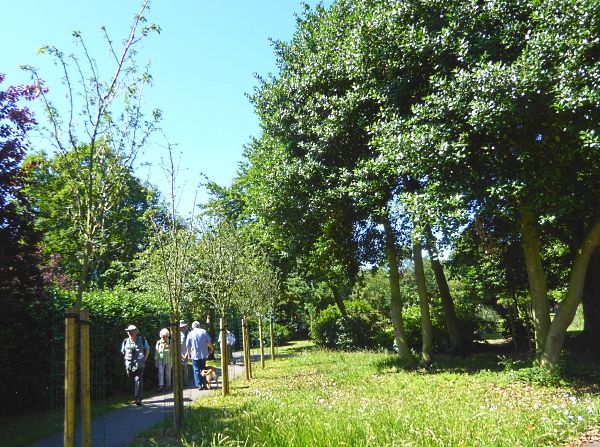 The row of new young Laburnums, which flowered within a month of planting. 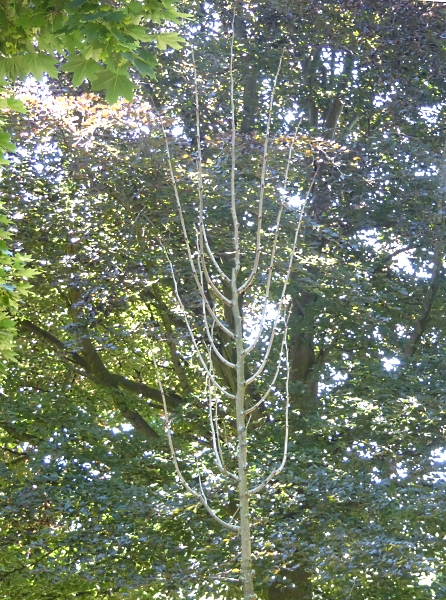 One of three Henry’s Limes, none of which appear to have come into leaf, and may have failed.

We also noted Peacock and Speckled Wood butterflies, and several common birds, Blackbird, Chaffinch and Wren, which were very relaxed around people. Shrubs included Privet, which is just coming into bloom and scent, some late Bird Cherries flowering in the shade and this lovely white-flowered one, which I think is the Snowbell Tree Styrax japonicus. 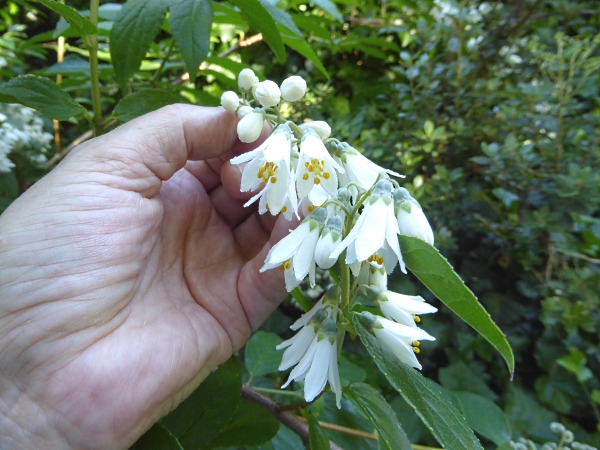 After lunch we headed off to Coronation Park, which was wide open and very hot. They were having a Community Day, with face painting, a magic show, a bouncy castle, pony rides, and a display by Lancashire Hawks and Owls.  They are all rescued birds, and money is raised for their keep by charging people £2 to have a hawk or owl on their arm. There were many young customers queuing for the privilege. 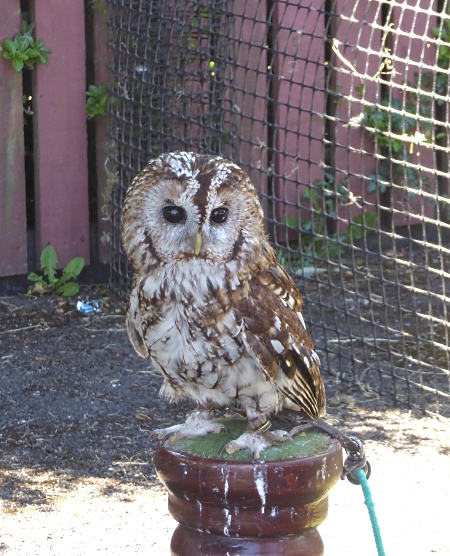 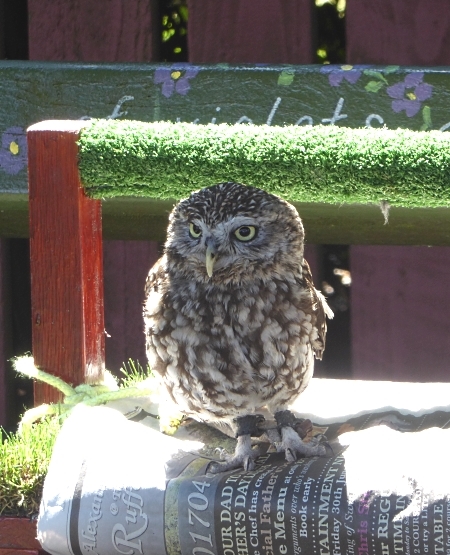 The park had only one tree that caught my eye, in a corner by the duck pond. Could this be a Medlar (the young fruit has quite a wide-open end) or will these fruits simply mature into Apples? I will keep my eye on it later in the year to see how they develop. 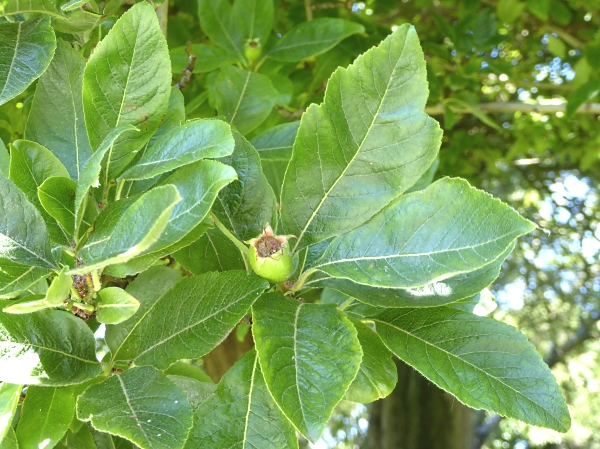 We crossed the road to the graveyard of St Luke’s church, which had been very wildlife-friendly a few years ago, but the impetus seems to have gone. Even the bug hotel is almost completely overgrown by Ivy, Nettle and Goosegrass, although I suppose the bugs don’t mind! 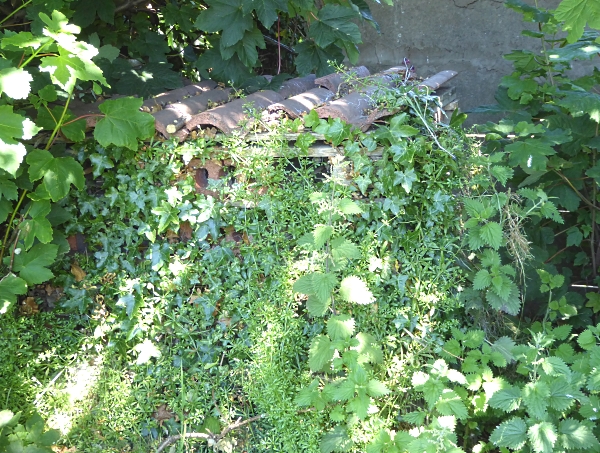 One of the gravestones was worthy of note – a lady who died in 2004 aged 83, who had been a code breaker at Bletchley Park. The old Butterfly garden had a large patch of Red Valerian intertwined with Hedge Bindweed. 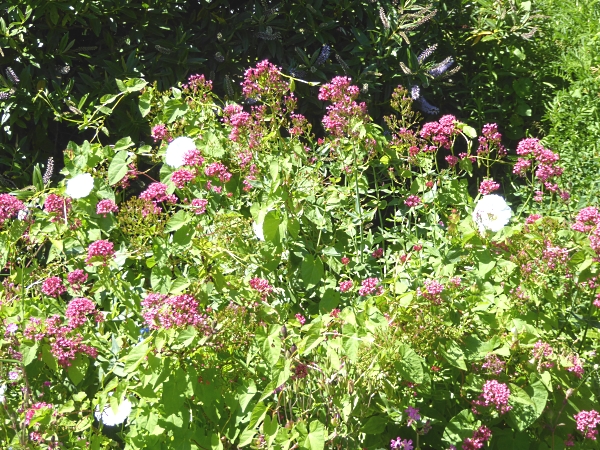 No new birds for the I-Spy list today. The only tree new to our list was an old Silver Birch in Alexandra Park (10 points), a tree which we have inexplicably failed to count so far. It takes our score to 940. Flowers – the Red Valerian was worth 25 points, the Hedge Bindweed 5, and we doubled some points from Kirkby by answering the associated questions. (What are the fruits of the Bramble called? Blackberries. What are the fruits of the Dog Rose called? Hips.) Total now 475.