DaveB and I took the train to Bidston then changed to the Wrexham line alighting at Caergwrle in Flintshire, Wales. A Wildflower patch beside the station held Common Fumitory Fumaria officinalis a scrambling native annual with crimson-tipped pink flowers that is considered a weed by some. It has been used medicinally to treat a variety of ailments ranging from stomach and gall problems to migraines, being readily available in apothecary shops as ‘fumus terrae’ (Earthsmoke). 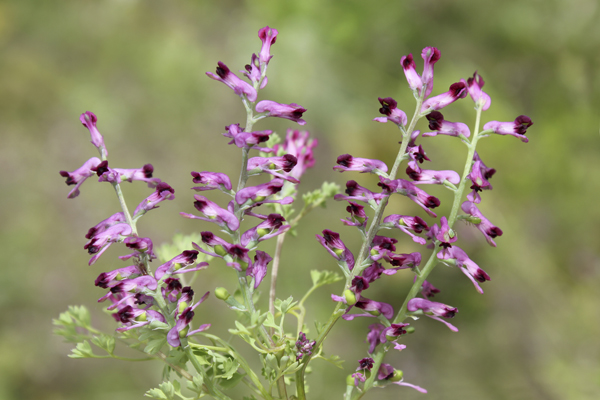 Wandering down to the 17th century pack-horse bridge that crosses the debris strewn weir of the River Alyn we spotted a Dipper flying upstream and a Grey Wagtail chasing after insects. Further along at a quieter patch the gravelly river-bed held flowering Common Water-crowfoot Ranunculus aquatilis and a few Brown Trout Salmo trutta were mooching in the shadows and being the ideal habitat Dave kept his eye in on his continuing quest for Lamprey. Along the banksides the leaves of Butterbur Petasites hybridus were still visible plus flowering Common Comfrey Symphytum officinale and Water Forget-me-not Myosotis scorpioides attracted a male Orange Tip Anthocharis cardamines. 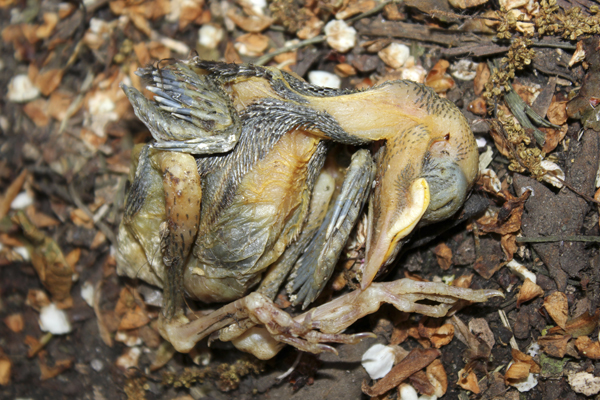 Corpse of the Day – Dead Chick

We soon reached the 120 acre site of the former aggregate quarry at Hope. An ambitious project here named ‘Park In The Past’ is planning to feature a life-size Roman fort and a reconstruction of an Iron Age farm. Snipe Flies Rhagio scolopaceus were dotted around the vegetation waiting for any unsuspecting prey items to come within their range whilst a couple of faded Small Tortoiseshells Aglais urticae and Peacocks Inachis io flitted by along with a Yellow-tail Euproctis similis Moth. 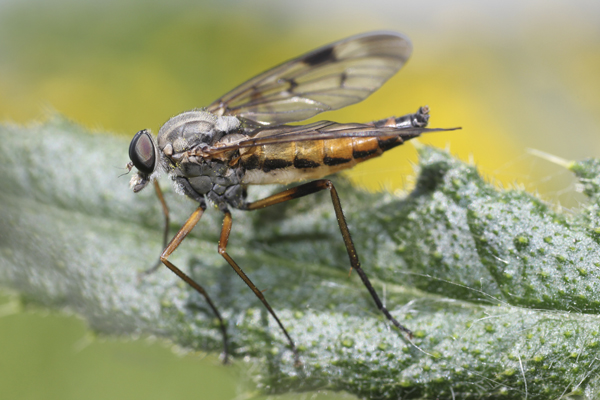 The site features a 35acre lake which held Mute Swans, Great-crested Grebes, Moorhen and Coot. We watched as a young Coot that swam out from the lake edge, dived in deeper water but never surfaced again and questioned whether it had been taken by a Pike.

The Alder leaves Alnus sp. were taking an absolute battering from the vast numbers of Alder Leaf Beetles Agelastica alni. Their larvae happily munch the leaves causing gaping holes – and given the bonking activities of the adults more offspring were on the way! 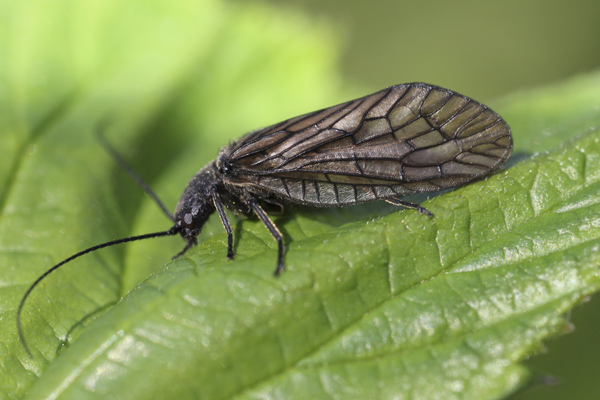 We wandered around the edge of the lake taking a detour around an area which was fenced off to prevent disturbance to nesting birds. A flock of Greylag Geese hastily took to the water with their goslings and a Lapwing called overhead. Sedge Warblers non-stop song belted from the scrub along with the scratchy notes of Whitethroat. In a sandy area where a number of small Wasps with red on their predominantly black abdomens were hyperactively running around. DaveB collected a specimen in a tube to drop off at the entomology section of Liverpool World Museum for identification.

All too soon we had reached the entry point again and it was back along Pigeon House Lane before crossing Fagyl Lane and into the meadow area where we took a slightly different route the short distance to Hope Station. Swallows and House Martins were joined by a few Swift who were silently scything the air around the new housing development adjacent to the opposite platform.