A change of venue for our MNA coach trip to Anglesey. We decided to visit the stunning location of Llanddwyn Island (Ynys Llanddwyn) at the far end of the beach at Newborough Warren. After being refused entry down to the car-park with the coach at the barrier to Newborough Forest we disembarked the coach and crossed a pasture field with flowering Meadow Saxifrage Saxifraga granulata before a rather pleasant wander down through to the beach. Plenty of birdsong with Willow Warbler, Chiffchaff, Blackcap, Great Tit, Wren, Prune and Chaffinch. There were the faint calls of Goldcrests from the conifers along with Coal and Long-tailed Tit. 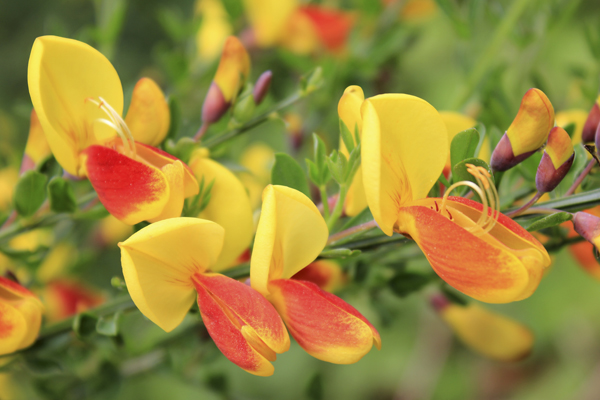 Plenty of flowering Common Vetch Vicia sativa, Germander Speedwell Veronica chamaedrys and Common Bird’s-foot-trefoil Lotus corniculatus along with Broom Cytisus scoparius growing quite tall up to 2m along with a few shrubs of Gorse Ulex europaeus. A couple of Broom shrubs of the subspecies Cytisus scoparius ssp. scoparius had pronounced red on the flower wings. I noted a Red-and-Black Froghopper Cercopis vulnerata and a small Beetle with black head and red elytra – Poplar Leaf Beetle Chrysomela populi that was also seen by Margaret Parry and co.

They are generally found in pasture areas feeding on all sorts of herbivorous dung. ChrisB overturned a log and a Ground Beetle Carabidae sp. quickly scurried away whereas the log DaveB and Les Hale overturned produced a Paper Wasp nest. A few more plants were noted with the fluffy catkins of Creeping Willow Salix repens, Carline Thistle Carlina vulgaris, Cat’s-ear Hypochaeris radicata and Mouse-ear-hawkweed Pilosella officinarum. 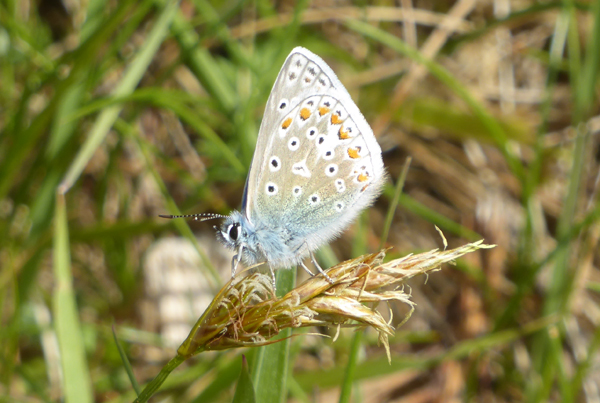 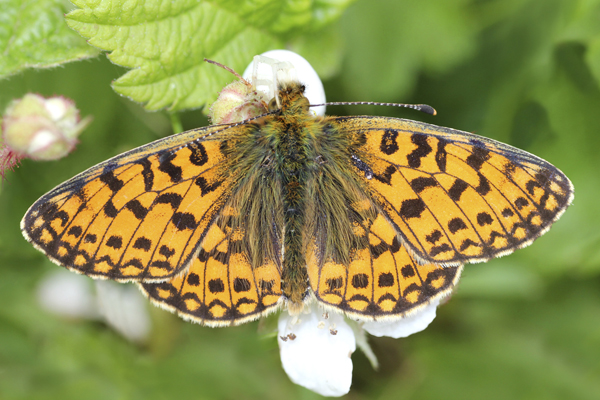 There were four Common Blues Polyommatus icarus and half a dozen Speckled Woods Pararge aegeria flitting in the sunshine but it was a Small Pearl-bordered Fritillary Boloria selene that caused a flurry of camera activity. This species is a priority species for conservation which has suffered a long-term decline in distribution and population. Habitat management such as woodland coppicing that encourages growth of the larval foodplant Common Dog-violet Viola riviniana and those nectar producing plants that the adults avidly feed from such as Blackberry Rubus fruticosus, Bugle Ajuga reptans, Bird’s-foot Trefoil Lotus corniculatus and Bluebell Hyacinthoides non-scripta. 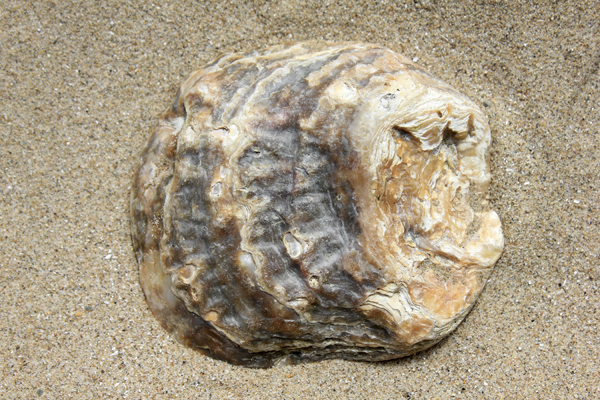 We stopped for a bite of lunch noting a Garden Tiger caterpillar Arctia caja moving at full pelt across the path before jumping down the dunes and wandering along the high tideline of the beach towards the Llandwyn Island. Masses of Kelp Laminaria sp. had been ripped from their rocky holdfasts out at sea and were lying in curved Seal-shaped masses on the beach. There were a few dead Common Shore Crabs Carcinus maenas, shells of Common Limpet Patella vulgata, Common Cockle Cerastoderma edule, Common Mussel Mytilus edulis and Native Oyster Ostrea edulis. Margaret Parry found the carapace of a European Spider Crab Maja squinado and a Mermaid’s Purse from a Lesser-spotted Dogfish a.k.a. Small-spotted Catshark Scyliorhinus canicula. 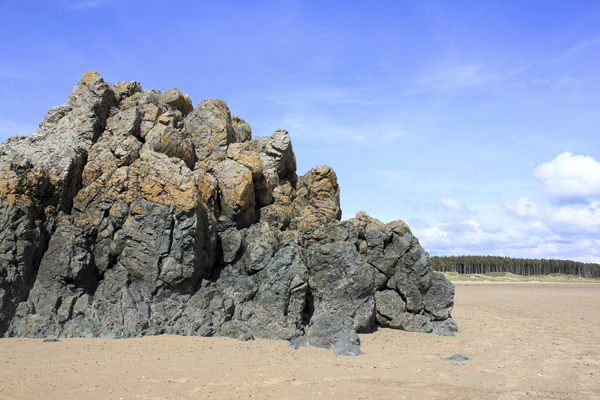 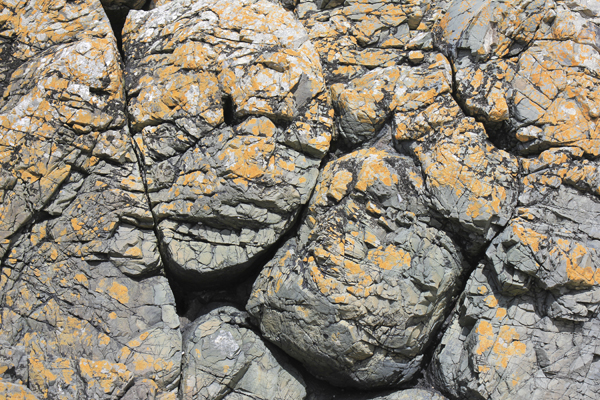 As we approached the island we passed several large rocks in the sand which are basaltic pillow lavas, part of the Pre-cambrian Gwna Group. They were formed by undersea volcanic eruptions; as the molten rock billowed out meeting the cold sea water the rock solidified producing this pillow shape. Lichens on the lava included Calcoplaca marina and Sea Ivory Ramalina siliquosa. 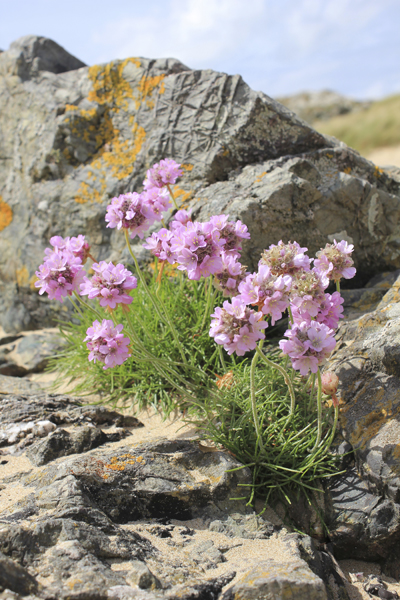 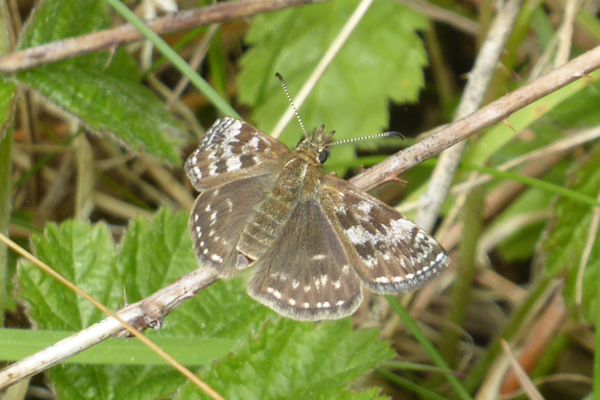 ChrisB found a Welsh Chafer Hoplia philanthus and I showed members a Green Tiger Beetle Cicindela campestris and Drinker Euthrix potatoria caterpillar. Barbara photographed a Dingy Skipper Erynnis tages – the most widely-distributed skipper, despite its decline due to changes in farming practice. I also photographed a blue-black larvae with a red tail protuberance – assistance with its identity appreciated! 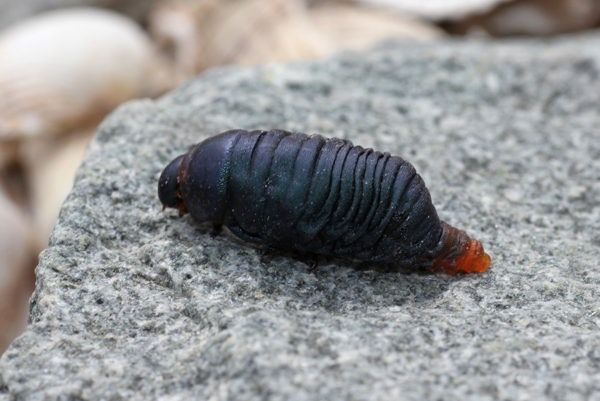 A beacon, called Tŵr Bach, was built at the tip of Llandwynn Island to provide guidance to ships entering the Menai Straits with a more effective lighthouse, Tŵr Mawr built nearby in 1845. The lighthouse was a great place for a bit of sea-watching a number of small islets held Cormorants, Shags and Oyks. The odd Gannet and Common Guillemot passed by and other members noted Eider and Common Scoter. 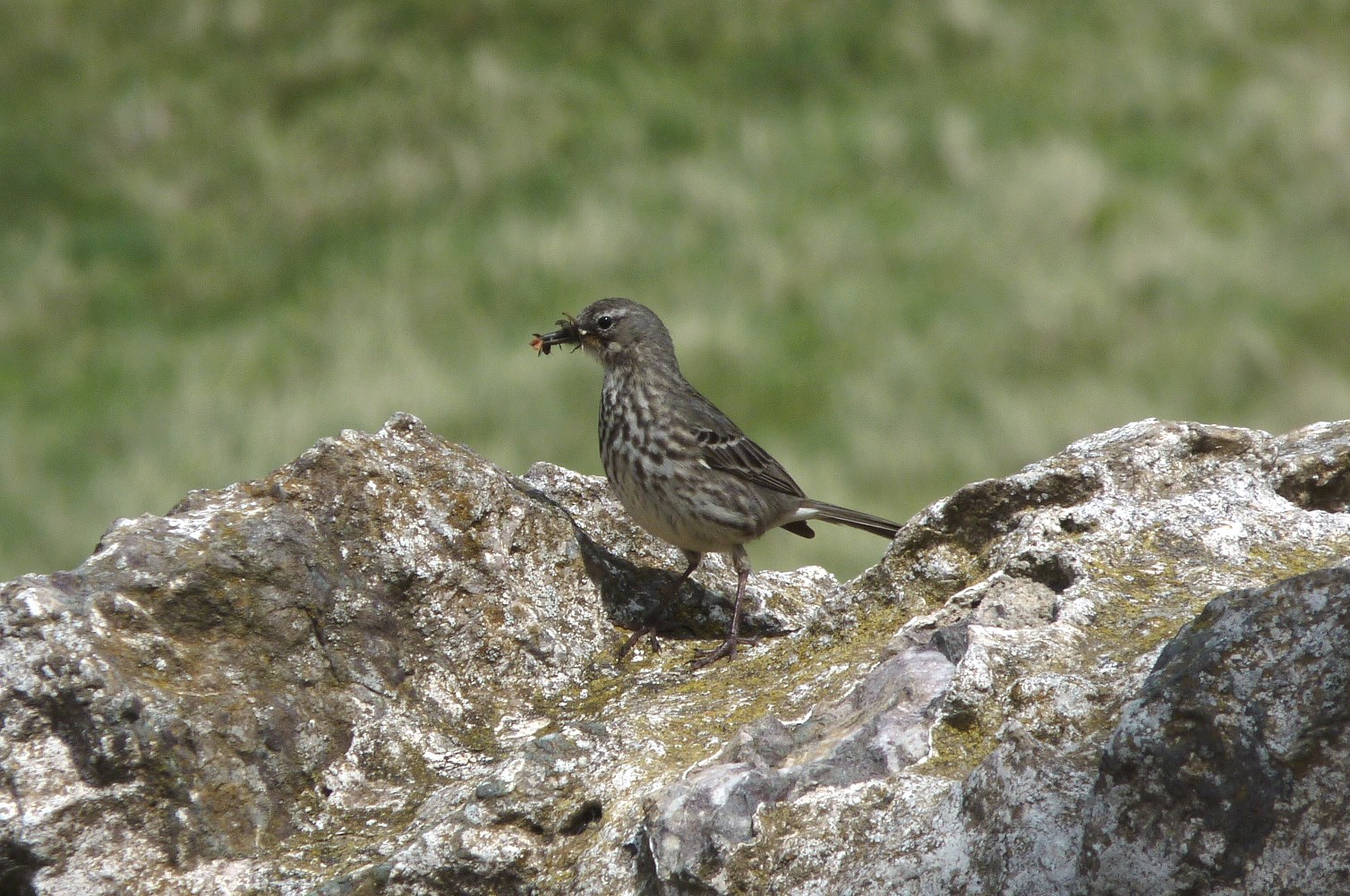 On the island were numerous Meadow Pipits and ascending Sky Larks, pairs of Stonechat, Pied Wagtail and Linnets. Hugh Stewart photographed one of the Rock Pipits with a beak packed full of insects, a growing brood nearby. On a shady rock face was growing Sea Spleenwort Asplenium marinum. Close-by are the ruins of Llanddweyn Chapel built in the 16th Century dedicated to St. Dwynwen – who lived on the island in the 5th Century and is a patron saint of lovers, making her the Welsh equivalent of St. Valentine. Growing from the Holy well Margaret Parry noted Hemlock Water-dropwort Oenanthe crocata.

All too soon we were rounding up the straggler MNA members for the return journey after a wildlife-packed day.