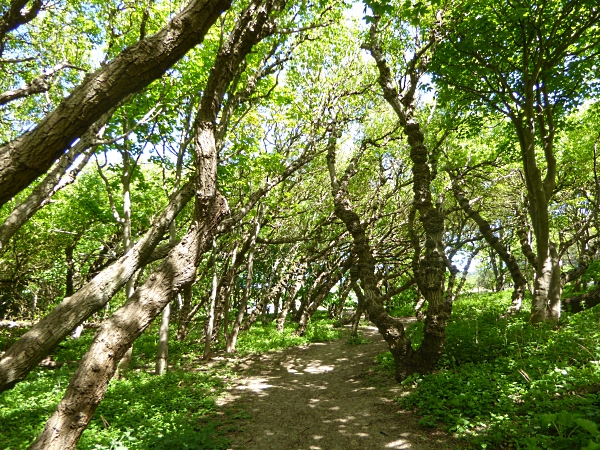 From Freshfield Station we walked down Victoria Road, entertained by a succession of Blackbirds who sang to us all the way along. In estate-agent-speak it is “one of the best roads in the north west”, meaning it is lined by detached houses, all different, many with security gates and CCTV, and some with fanciful  names like “Windwhistle”. There were several Red Squirrels running about in the National Trust reserve. One particularly busy little fellow was up and down trees, collecting nuts from the feeding cages and scampering off to bury them, one at a time. 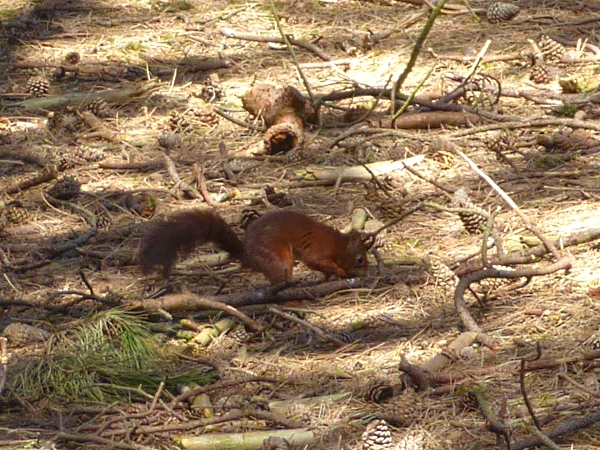 Then we threaded through the pinewoods and open spaces, noticing that there were many areas of younger trees, all apparently Corsican Pines, the dominant species of this sandy area. The male flowers are in clusters, while the female flowers are reddish, at the tips of the shoots. 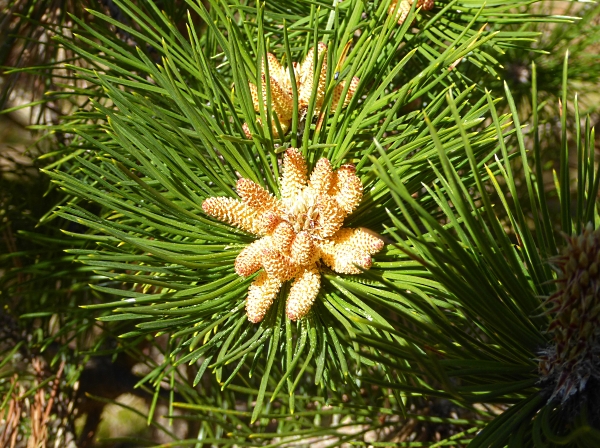 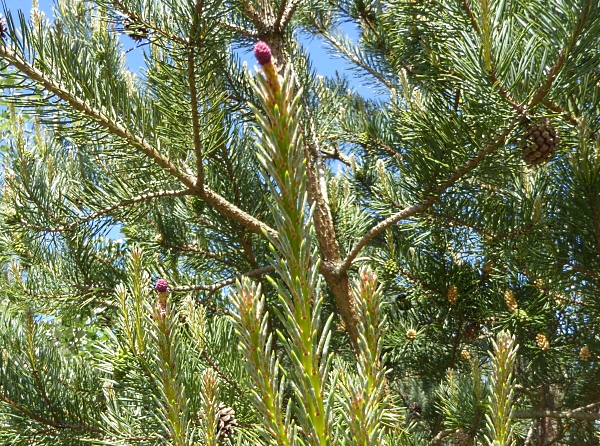 The only other common trees were Poplars, especially in the more open areas. Some were Grey Poplars Populus canescens, a hybrid of  White Poplar and Aspen. The leaves have the white undersides of the White Poplar, but the scalloped edges of Aspen. 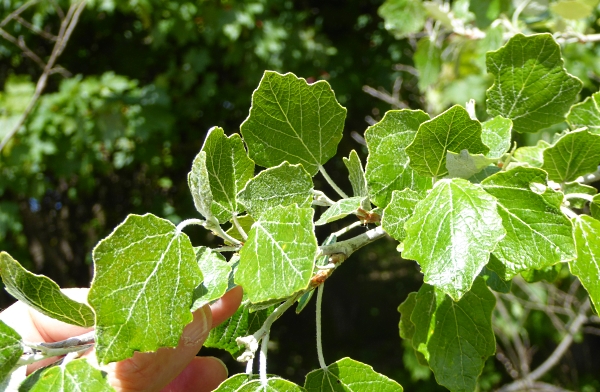 The other widespread Poplar had large soft leaves, with very long points on their otherwise typical “ace-of-spades” outline, and which weren’t white underneath. There were large clumps of them near the picnic tables, with broken, recumbent trunks and gnarly bark. They seem to be the Wild Black Poplar Populus nigra ssp. betulifolia, which is considered uncommon, but “locally abundant in floodplains and old parks”. They must like this light sandy soil. 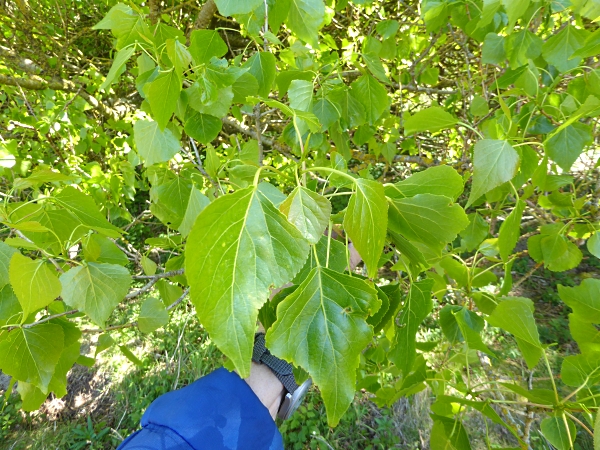 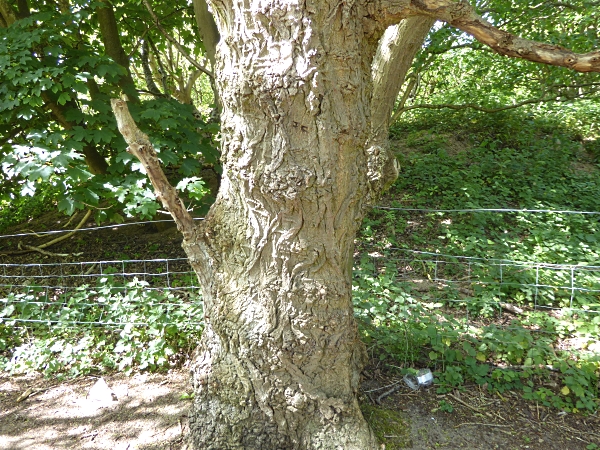 The National Trust makes much of the history of asparagus-growing in this area, and there is a new wooden sculpture of three enormous asparagus stalks, apparently growing right out of the ground. 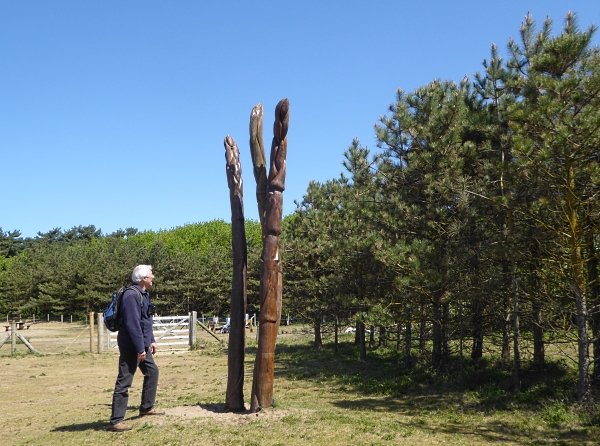 We noted some distant rabbits, and then took a path up and over the dunes to the shore. 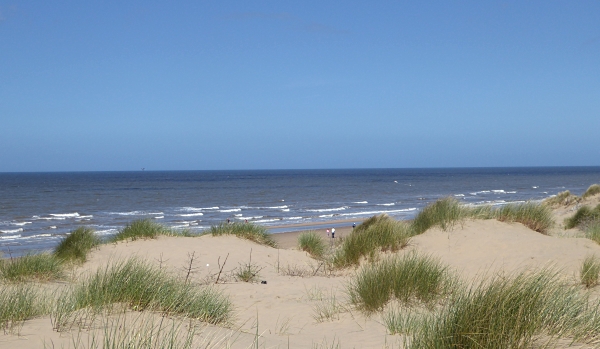 Lots of people were enjoying the beach, and as we returned via Formby beach car park, even more vehicles were coming in. It must have been a very good day for the National Trust, at £6 per car. There were Swallows in the air over the shore, and near the tollbooth as we returned to the station, a Jay popped over the fence out of the pinewoods, grabbed something edible from the ground, then melted back into the trees. None of today’s birds were new, and although Swifts are back in the area, we didn’t spot any. I-Spy bird points now up to 1170. No new trees today, either, and we didn’t get last week’s Field Maple question. (Q. What is the type of Maple wood used by furniture makers? Answer at end.) Our tree points are stalled at 880.

We spotted just one new flower today, but it was a good one – the Common or Stinging Nettle Urtica dioica. There was just one clump of plants in flower, at the base of the last (easternmost) wooden post past the squirrel reserve. Why was that one so early? A lot of cars queue here, and there may be something in the exhaust fumes that it likes. Alternatively, it was below the first wooden post that dogs find on the way down Victoria Road, so it must be well-supplied with nitrogen fertiliser! 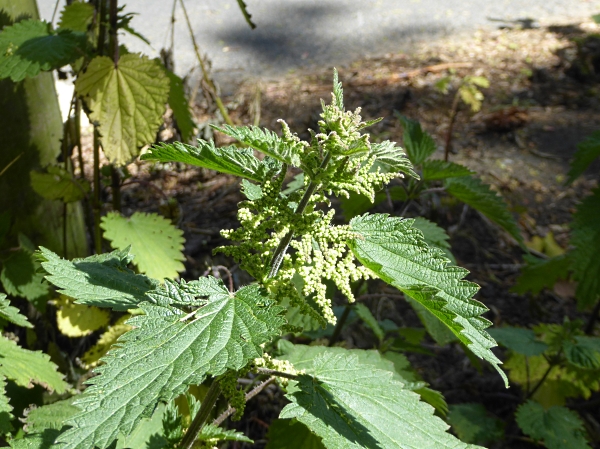 When I checked my book I was amazed to find that nettles have separate male and female plants and the flowers are different. These whitish-looking ones are female, I think, while the male stamens are redder. You learn something every day! It is worth 50 I-Spy points, which we might double if we answer the related question. Flower points now 295.

On the way home through Crosby I photographed some unusual Hawthorns in gardens. The normal white “May” flowers are out, and they are mostly the common Crataegus monogyna, which as its name suggests has only one seed in the berry, and thus only one style in the flower (that’s the bit the pollen grains land on.) Usually un-noticed is the Midland Hawthorn Crataegus laevigata, which has two or three styles and thus two or three seeds in the berry. It flowers a week or two earlier than monogyna and smells rather foul, aparently. But just now two red or pink varieties of Midland Hawthorn are in bloom. The red or pink double variety is ‘Paul’s Scarlet’, while the less common red single blossoms with white centres belong to variety ‘Punicea’. (Answer from above : Bird’s-eye maple.) 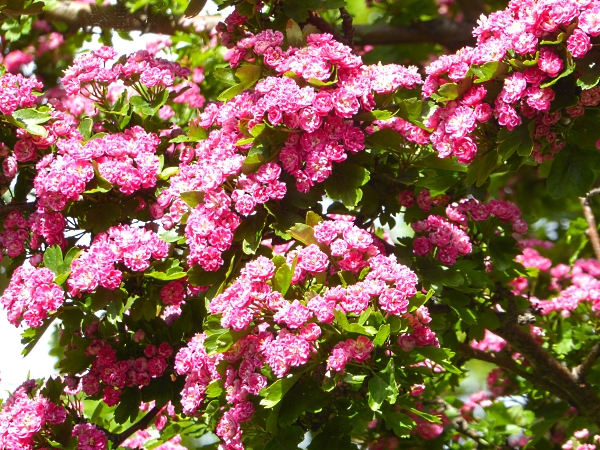 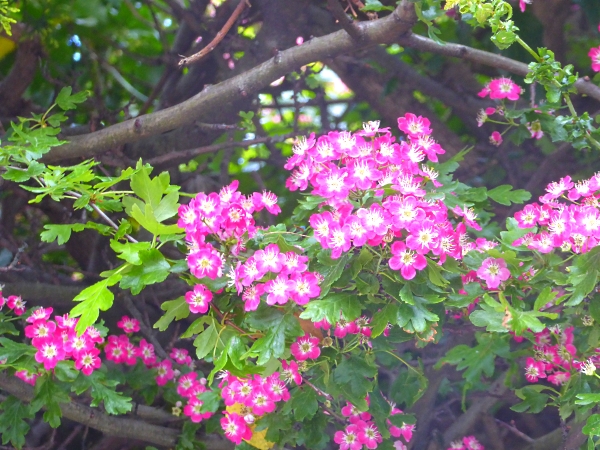 Public transport details: Train from Central towards Southport at 10.23, arriving Freshfield 10.55. Returned from Freshfield on the 2.11 train, arriving Central 2.43.