Kew Woods are under the management of the Forestry Commission, and are part of the Mersey Forest.  It’s a former landfill site off Town Lane, where 12,000 new trees and shrubs have been planted in recent years, although it’s still fairly bleak and open, with the young trees and shrubs clumped in rough grassland. 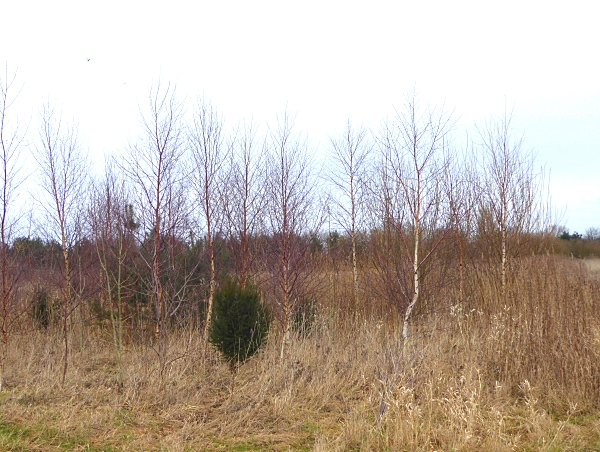 The plan today was to hunt for a small flock of six Cattle Egrets, which has been reported there for the last week or two. It was a mild day in Liverpool, but colder in the open area beyond Southport, and with the beginnings of a fine drizzle. But even the dead, damp and dormant vegetation sometimes has a strange elegance, such as this old seed head of Burdock. 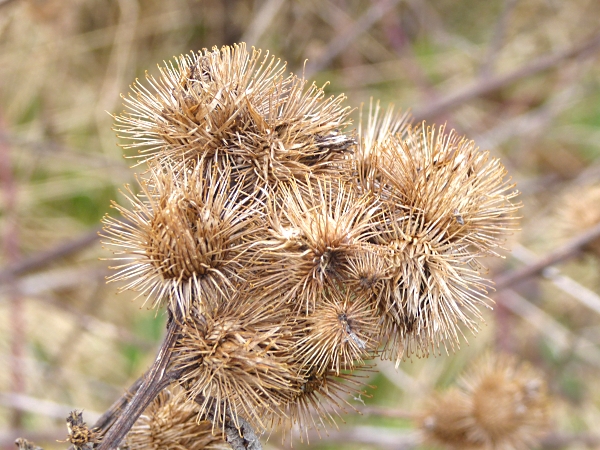 On the edge of the football fields the hedges were thick with Bramble and the gullies bright with splashes of yellow reeds. A bush in the hedge was covered with tiny white buds: it wasn’t Blackthorn because the twigs weren’t black and there were no thorns. I need to look it up. The Goat Willows had red twigs, which bore the bursting catkin buds known as Pussy Willow. 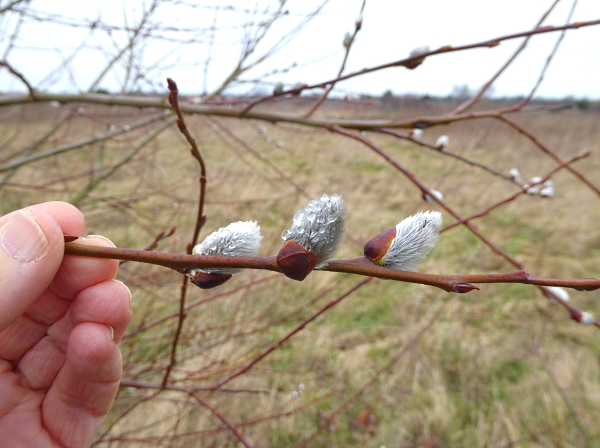 There was no sign of the Cattle Egrets there, and after lunch and a loo stop in Dobbie’s Garden Centre, we headed back to the southern area of the woods.  Another tree which was sprouting early was this Elder. 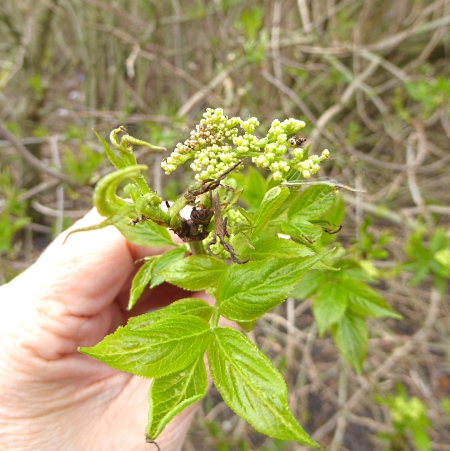 We spotted a Buzzard on a fence, which was being pestered by a pack of 8 or 10 Magpies. They forced the Buzzard up into a small tree where they clustered around it, occasionally flying closely by and generally mythering it. 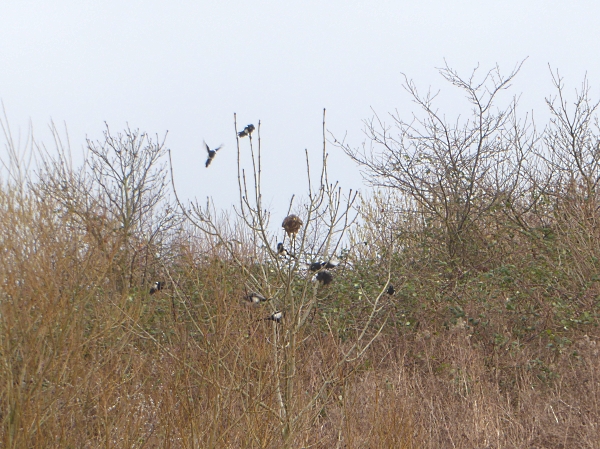 But the Buzzard stoically ignored them, and eventually the Magpies let it alone and it returned to its favoured spot on the fence. 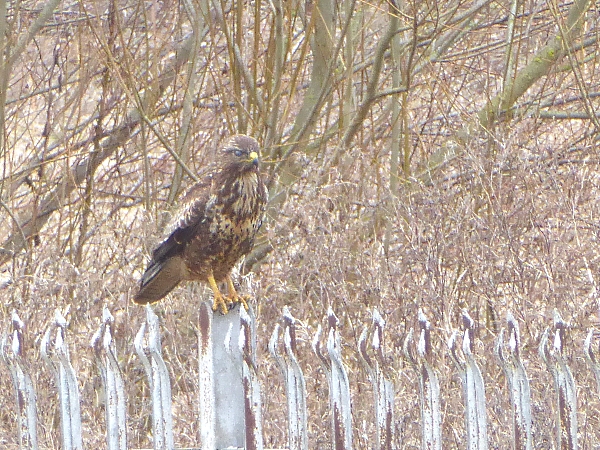 Near a field with some ponies in it we met a lady who said the Cattle Egrets had been there up to Friday or Saturday, but today they had gone. Oh bother! We aren’t having much luck with our twitching this year. On the way back to the bus I stopped to admire this Hazel draped in its newly-emerged catkins. 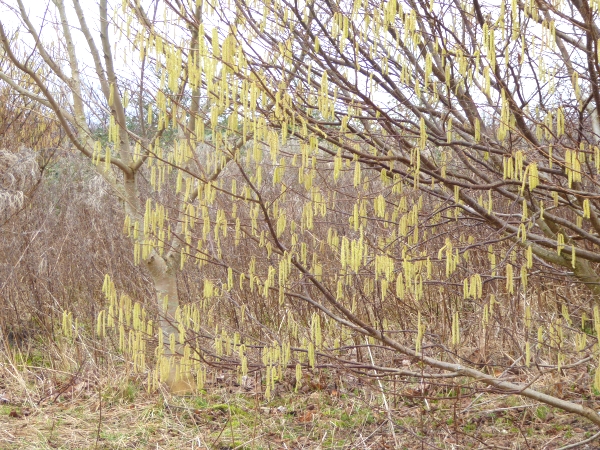 On the way home through Victoria Park, Crosby, I found another of those shrubs with the white buds, and this one was partly out. I think it’s Cherry Plum Prunus cerasifera, which is definitely said to flower before Blackthorn. 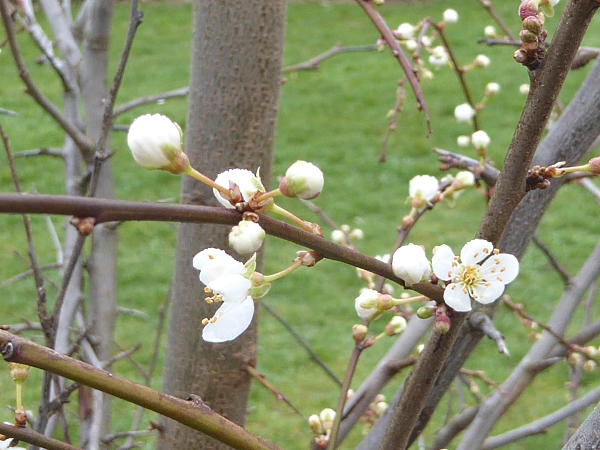 The Flowering Currant is breaking out, too. 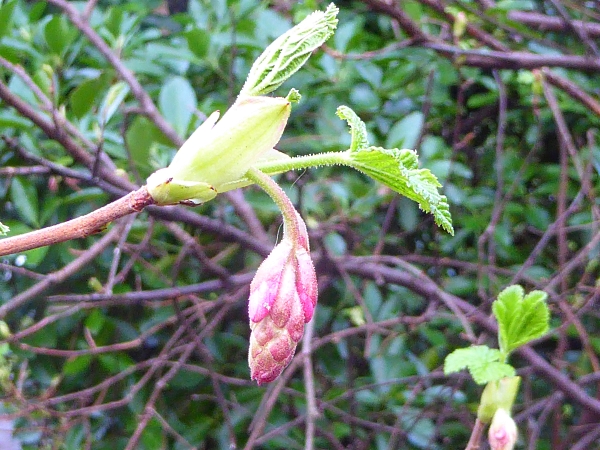 For the trees on the I-Spy list we claim Goat Willow (10) and Elder (10) today. From the train window we also saw the masses of Corsican Pines (20) between Ainsdale and Freshfield. We are creeping slowly towards 1000, now up to 330. Last week the bird points were up to 560, but we may not have had anything new today.