It was a terribly unsuitable day for New Brighton, really, with a raw north-east wind, but we wanted to see a small group of Purple Sandpipers which have been roosting at high tide on the pontoons on the Marine Lake. Our first sight was of two clusters of very similar-looking brown waders, all huddled together with their heads tucked in. 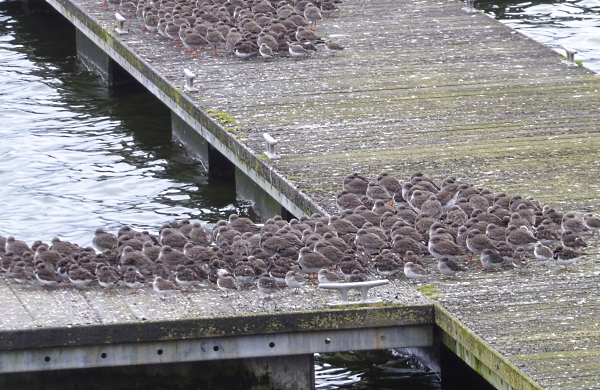 Closer inspection showed it to be a mixed flock of mostly Redshanks, with a small scattering of Turnstone, Dunlin and a few Purple Sandpipers on the edge. Occasionally one would hop about on one leg, as if they didn’t want to get their warm foot cold again! 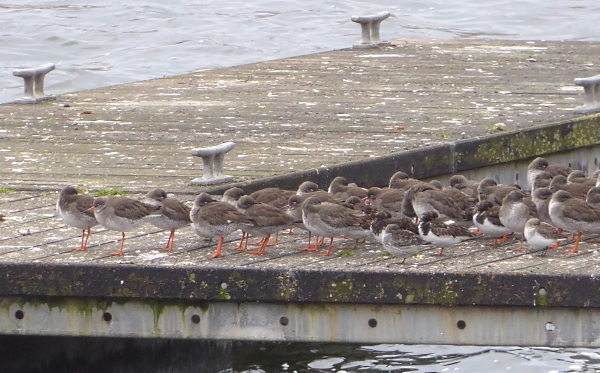 On the picture above, all the birds on the left with the red legs are Redshanks. About two-thirds of the way to the right, the small bird in the front with the streaky breast is a Purple Sandpiper, and behind it are two or three Turnstones with their dark chest marks. The little bird on the far right with the white breast and dark legs is a Dunlin.

The Stena Line ferry to Belfast went out, past the red cranes on the docks. One tough photographer was standing on the point with a camera and tripod, getting his wellies wet, perhaps hoping for that award-winning shot. 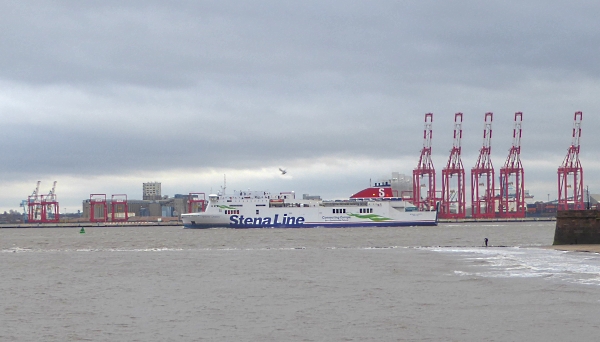 Despite the cold we circled the Marine Lake, passing Fort Perch Rock. 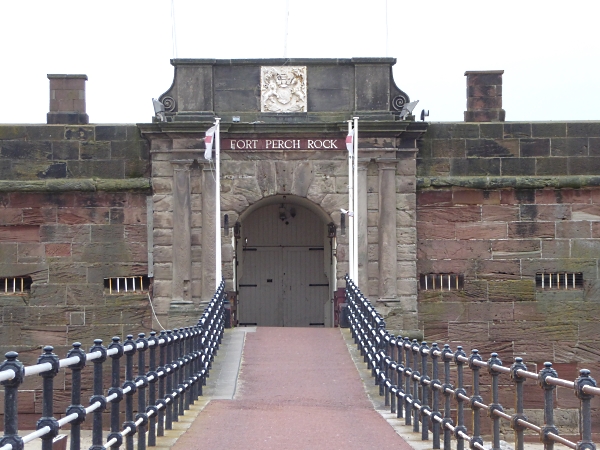 There were hundreds of pigeons on the front, a pair of Mute Swans on the lake and hordes of gulls, mostly Black-headed gulls and juvenile Herring gulls. 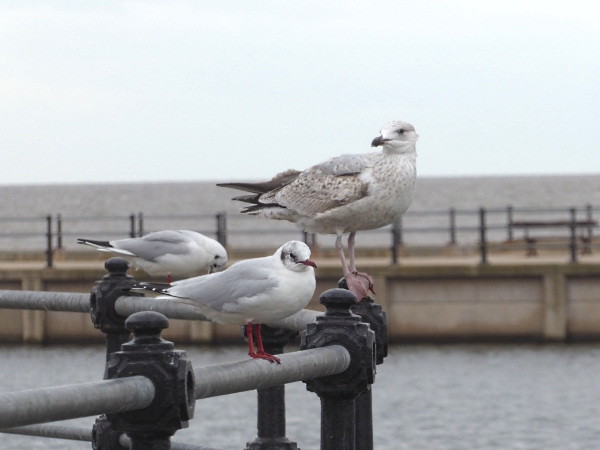 Several Sanderlings pattered busily along the edge of the incoming tide. 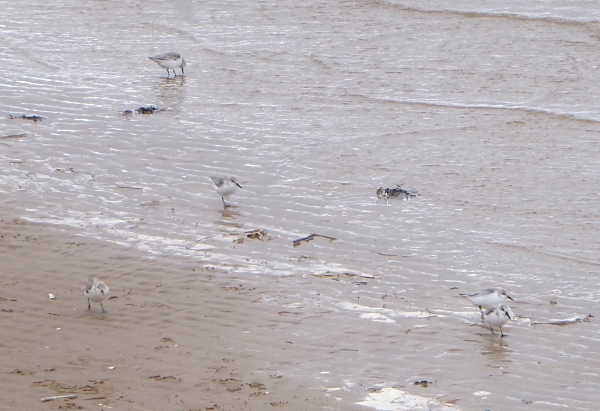 It was far too cold to linger, so we executed the second part of our day’s twitching plan, Heswall, where a group of Waxwings has been reported for several weeks at the junction of Thurstaston Road and the A540. Eight were still there late yesterday afternoon (Saturday) so we thought there was a fair chance of spotting them. We got the 119 from New Brighton, which took a long and meandering route through Liscard, Birkenhead, Bidston and Upton (but at least it was warm on the bus) to Arrowe Park, where we changed to the bus for Heswall. And after all that, there were no Waxwings!  What a swizz! The Rowan the Waxwings had been in was stripped bare. 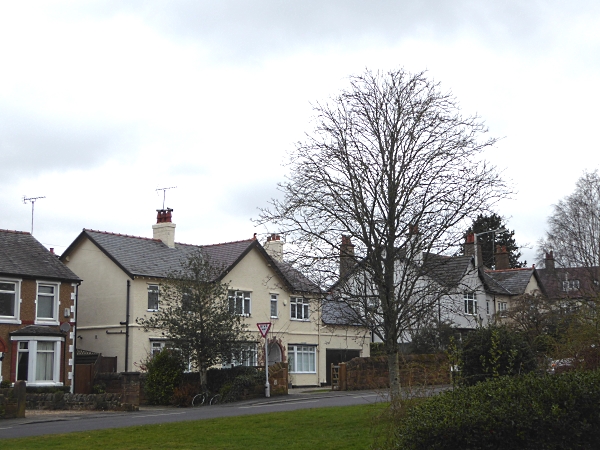 We had a late lunch in the little park there. I thought one evergreen tree was a Lawson’s Cypress (worth 15 “I-Spy” points) but now I think it was only a Leyland Cypress (worth no points at all). There was a clump of fine old Birches, but until the leaves come out and we can distinguish the Silver Birches from the Downy Birches, there are no points to collect on them either. The Rhododendrons were just starting to bud, and I don’t think I have noticed them so early in the year before. 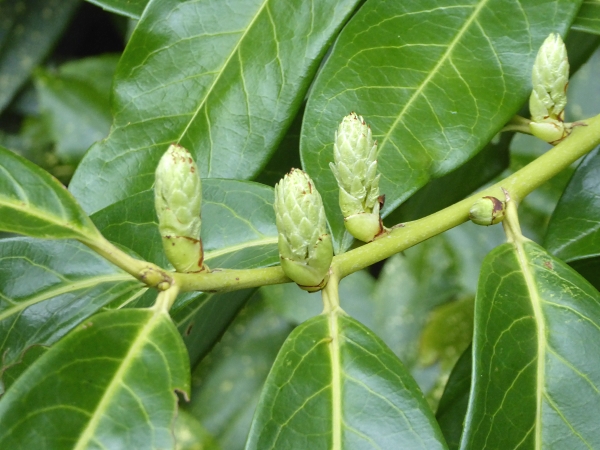 We walked along to Tesco, hoping the Waxwings had decamped to the car park there (because supermarket car parks are a favourite Waxwing haunt) but there didn’t appear to be any berry trees, and definitely no exciting birds. At the bottom of Poll Hill Road there was a sad mutilated Scots Pine, the survivor of some extreme pruning. 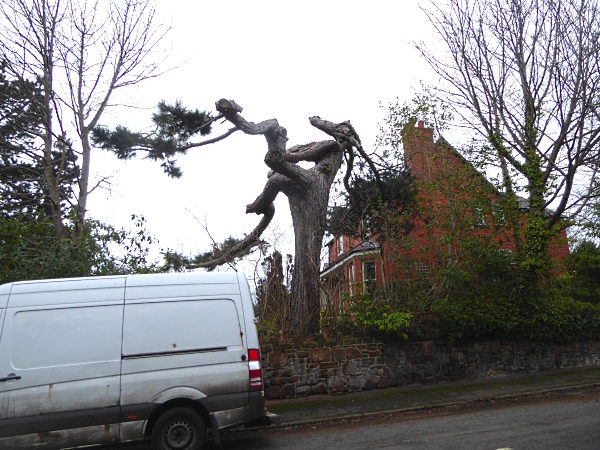 The day wasn’t a complete wash-out for trees, as we saw a couple of Monkey Puzzle trees from the bus on the way home, worth 20 points, so now we have 290. The birds are doing much better.  John tells me we had 515 points up to last week, and we probably have at least 40 more today.

Near home I noticed a couple more signs of spring, this very early Camellia in flower, and the swelling furry buds of a Magnolia. 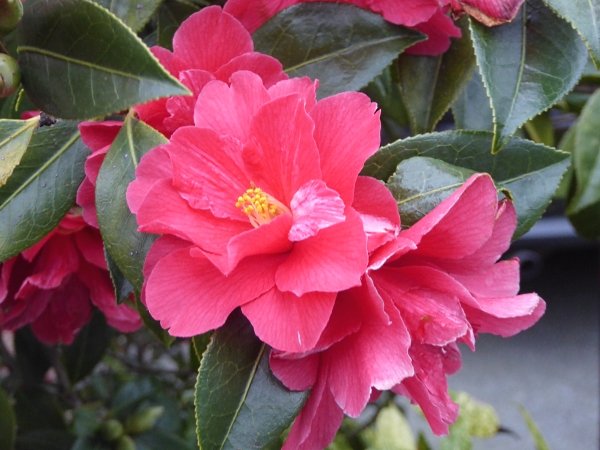 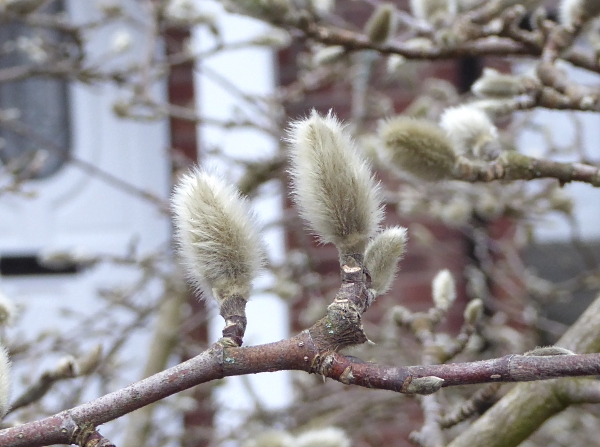