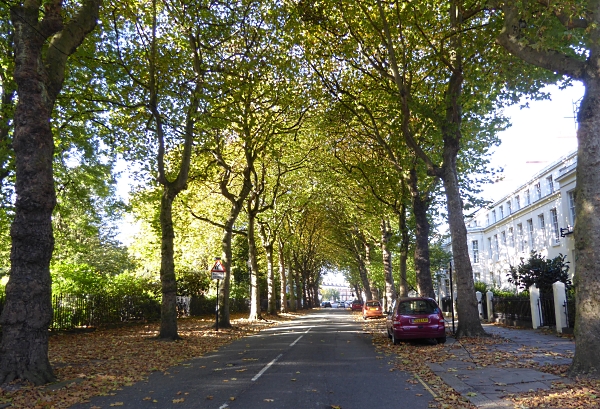 Yet another tree day, this time looking in Liverpool City Centre. First to note are some new ones. Last Sunday I noticed that workmen had just planted twelve young columnar (“fastigiate”) oak trees  in Elliot Street, at the bottom of the steps from Great Charlotte St. This morning there were six more in Houghton Street, which leads around to the Playhouse. I sneaked through the barriers to read the label still attached to one of them, and they are English Oaks, Quercus robur Fastigiata ‘Koster’. The label also said the order quantity was 26. There are eighteen planted already, so eight more to go. They are probably intended for Parker Street, outside Superdrug. 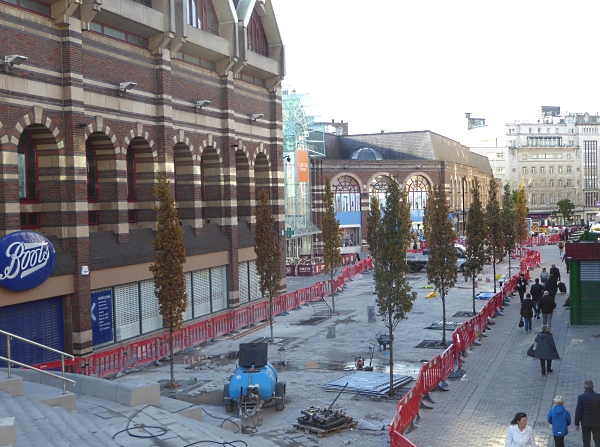 It was a lovely clear autumn day, and the leaves on the trees have started to change colour this week, and come down in the wind. We intended to start in Abercromby Square, but miscalculated the bus route and found ourselves nearer to Falkner Square. There are lots of Plane trees around the edge, and one lone Hawthorn allowed to grow to (smallish) tree size. In the border was a plant whose flowers had three pale blue petals. I think it’s probably one of the North American Spiderworts, genus Tradescantia, sometimes planted in Europe as ornamentals. 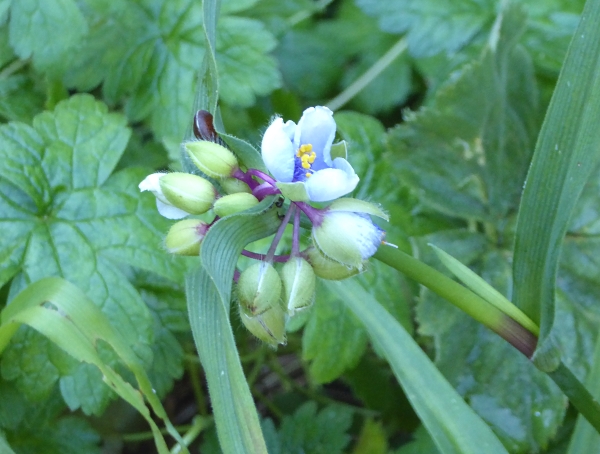 Then we threaded through Grove Street, Myrtle Street and Chatham Street, noting a row of young Tulip Trees outside the Sidney Jones Library. On the corner of Chatham St and Abercromby Square is this rare Victorian “Penfold” Post Box  with a history of damage and restoration, see this blog post from an enthusiast. 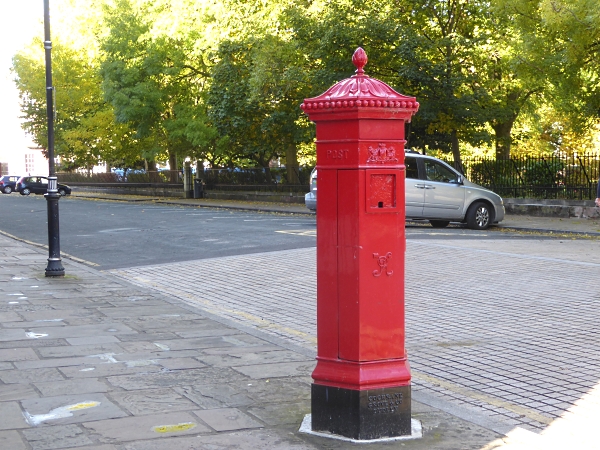 Inside the park railings there’s a mature Tulip Tree in the south east corner, opposite the pillar box, which we might visit again when it flowers. An ornamental Apple tree bore little red fruit with a bitter taste.  From a distance Plane, Norway Maple and Tulip trees are all looking about the same now, with similar crowns, similar pointy leaves and the same colour changes, but the Norway Maples are particularly lovely. 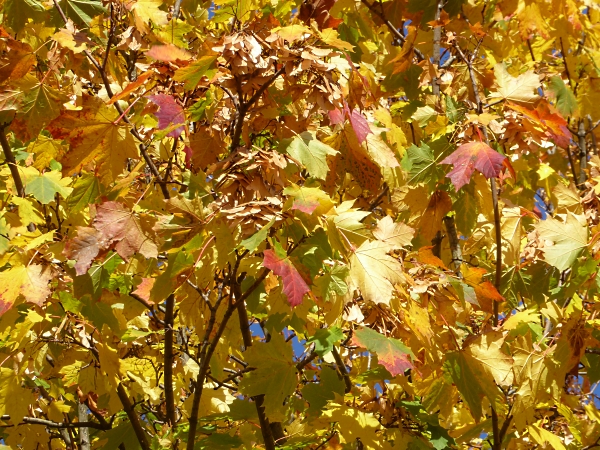 At the north west corner is the memorial sculpture to Noel Chavasse, the double VC, with the names of other Liverpool-born VC winners inscribed around the base. 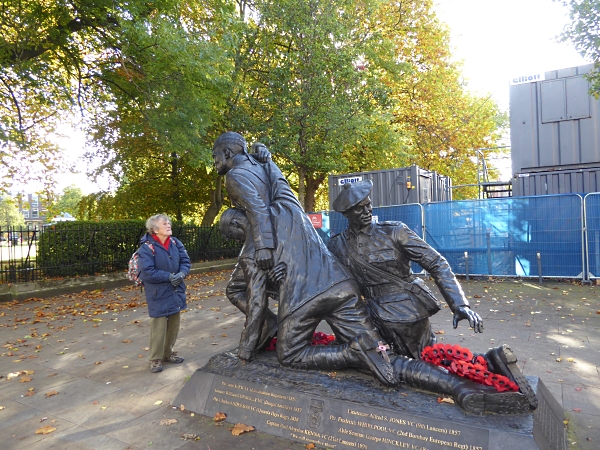 Then along Hope Street to St James Cemetery, where we had our lunch. It was quite cool when  the sun went in. We examined two very odd thorn trees that seemed to be reverting to Hawthorns. The upper trees had plain oval leaves and biggish fruit with two seeds. From the base of the trunk they were both sprouting a sucker-like addition that bore leaves and fruit like an ordinary Hawthorn. One might be just the lucky germination of a Haw from anywhere, but both of them were doing it. Are they hybrids reverting to a parental form? 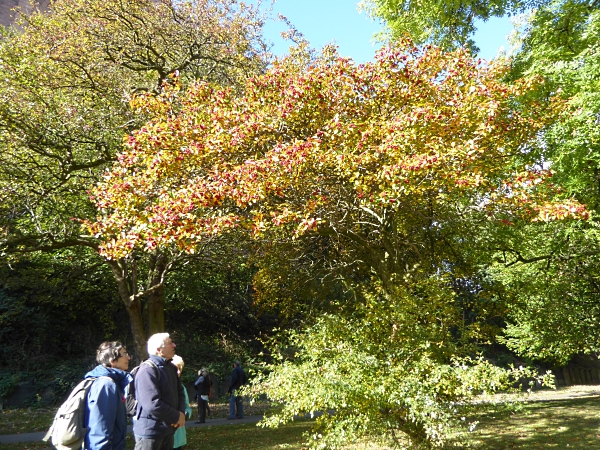 The upper and lower parts of the tree. 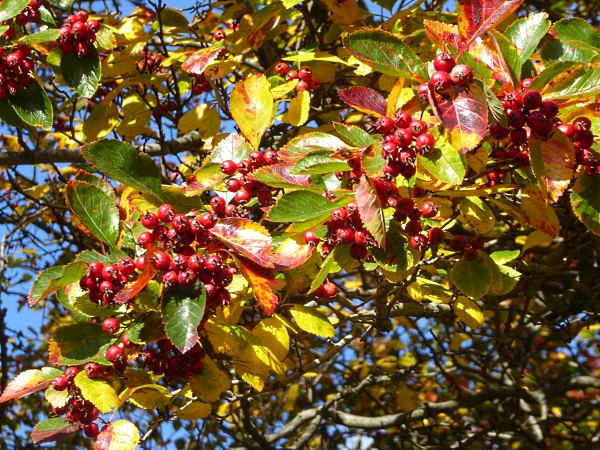 Berries and foliage at the top 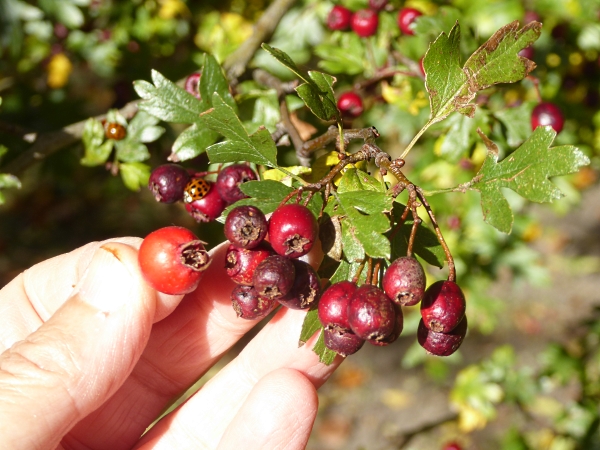 Berries and foliage at the bottom, with a “top” berry for comparison. 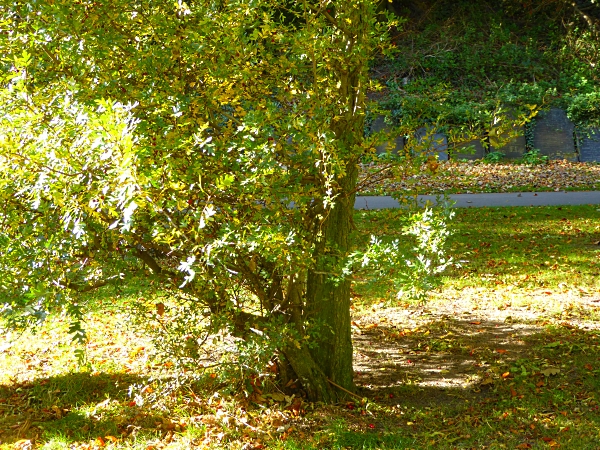 The minor trunk at the base.

Several Hornbeams had big bunches of seeds, but we haven’t seen many Ash keys this year. There is supposed to be a big old Golden Ash Fraxinus excelsior ‘Jaspidea’ in the far south east corner of the cemetery, which should have been putting on its autumn show of brilliant lemon-yellow leaves all over, but we couldn’t find it. There is one big old Ash there, but it didn’t seem to be changing colour in any spectacular way, and there was an ominous stump. However, outside one of the houses opposite the Cathedral west front there was a young tree in a garden that probably WAS a Golden Ash, with a yellow-fruiting Crab Apple next to it. Very nice! 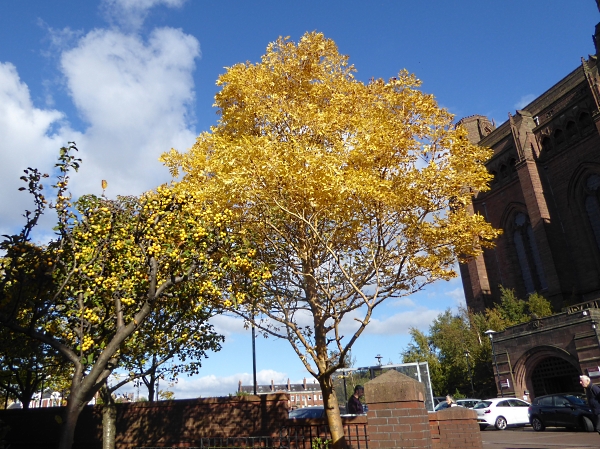 Opposite the Chinese Arch, at the bottom of Upper Duke Street, there are about half a dozen young Dawn Redwoods planted on the pavement. They are Chinese trees, of course. There are some other trees there of the same age, and may also be Chinese-themed. Then we wandered through the back streets of the Ropewalks district, heading for town, and getting not quite lost. We found ourselves in the dark and narrow Henry Street and had a pleasant surprise. Outside the Pagoda Chinese Arts Centre there is a large mature Foxglove Tree Paulownia tomentosa.  The only other one I know is a weedy one in Calderstones Park. Next to it was a Narrow-leaved Ash Fraxinus angustifolia, and there were also some Maples. 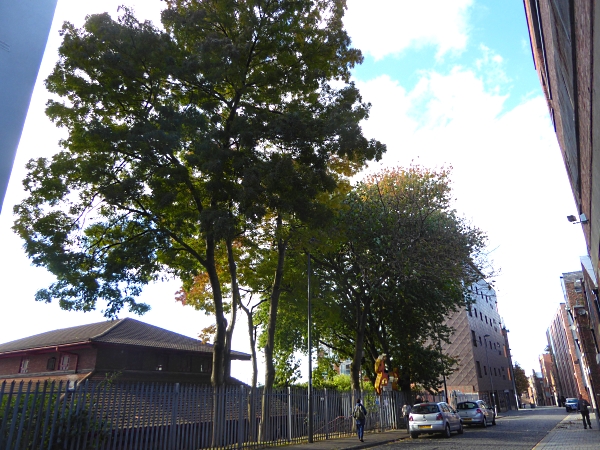 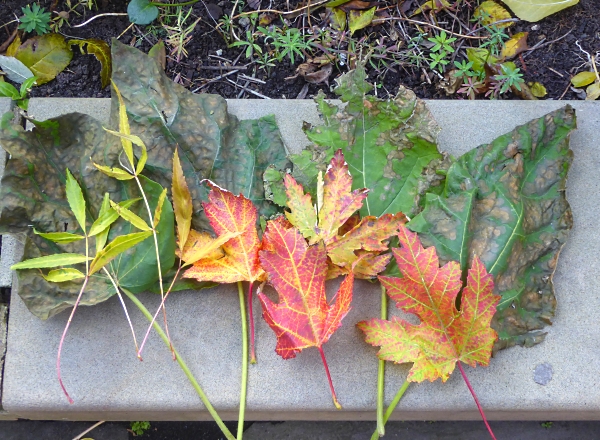 Then down Fleet Street and School Lane and into the garden at the back of the Bluecoat. There are two Snake-Bark Maples in there. One appears to be dying, but the other is in fine form. The leaves are hardly three-lobed at all, so it might be a Père David’s Maple, Acer davidii. On the picture below there is a tall Fig at the back with a small golden ornamental Maple in front. The possible Père David’s Maple  is in the middle, with a small green ornamental Maple on the right. 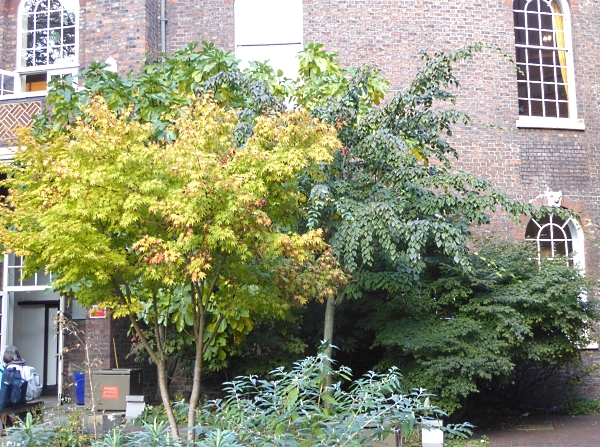 In Bootle the pair of Claret Ashes Fraxinus angustifolia ssp. oxycarpa ‘Raywood’ on Stanley Road just north of Marsh Lane, are now just coming into their magnificence. It’s amazing how many interesting trees there are in unexpected corners of the city. 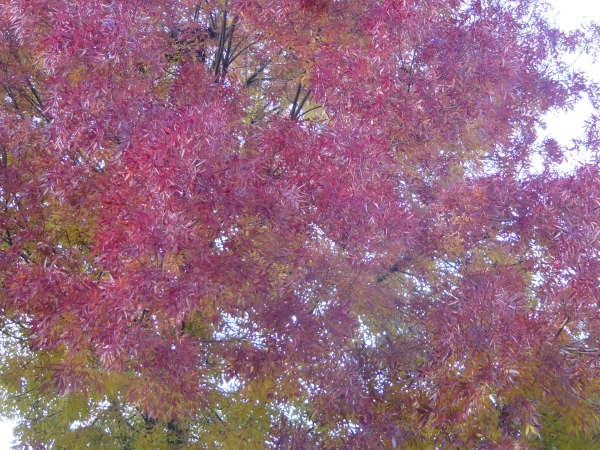 Public transport details: Bus 86 from Elliot Street at 10.20, to Catherine Street / St Phillip Neri at 10.25. Walked back into town.