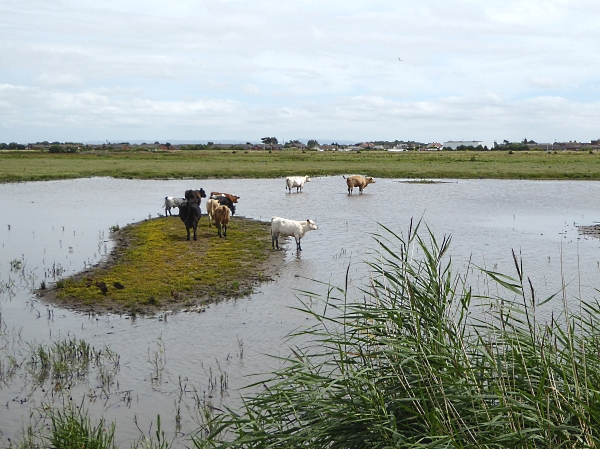 There’s a small colony of House Martins nesting under the eaves in Preesall Close, which is near where the 44 bus dropped us, and adjacent to the path along the sea wall on the south east side of the reserve. 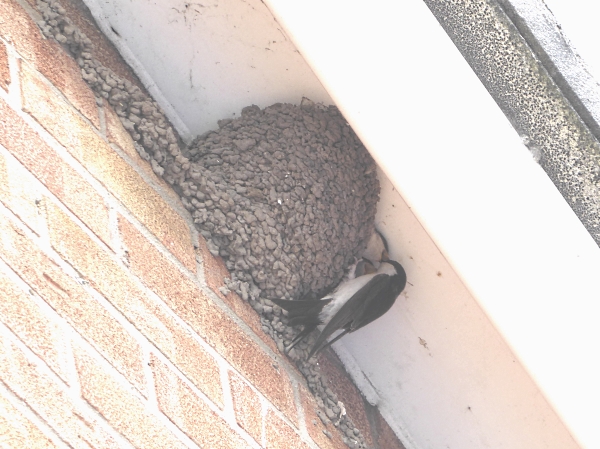 It was overcast, and cooler than we expected with a brisk breeze in our faces as we walked along Marshside Road. Along the verge we noted Tansy, Burdock, Convolvulus, Great Willow Herb, Poppy, Ragwort, Yarrow, Mint and Comfrey. We had heard that a Glossy Ibis has been coming and going here for the last few weeks, so we kept our eyes peeled, but saw only Wood Pigeon, Moorhen, Mallard, a few Oystercatchers and a Little Egret posing nicely. 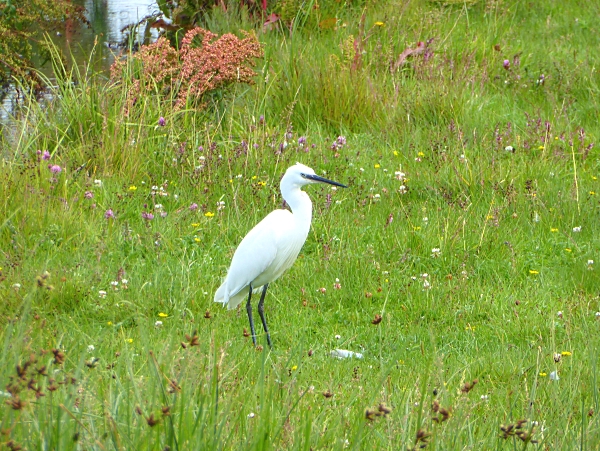 We had a quick look in Junction Pool, but there were just Shovellers, Greylag Geese with goslings, Black-headed Gulls and a Coot. Then we walked along to Sandgrounders hide. The sides of the path there remind me of Darwin’s tangled bank, such a lot was going on in just those three hundred yards. Plants included Rest Harrow, Evening Primrose, White Campion, Green Alkanet, White and Red Clover, Yarrow (including some with pink flowers), a Pyramidal Orchid, Hop Trefoil, and a clump of about 20 stalks of something nettley, each covered with very dark sepal tubes and sparse pink flowers. Was it Black Horehound? That’s best match I can find. The book says it has a disagreeable smell, but I regret we didn’t think to sniff it. 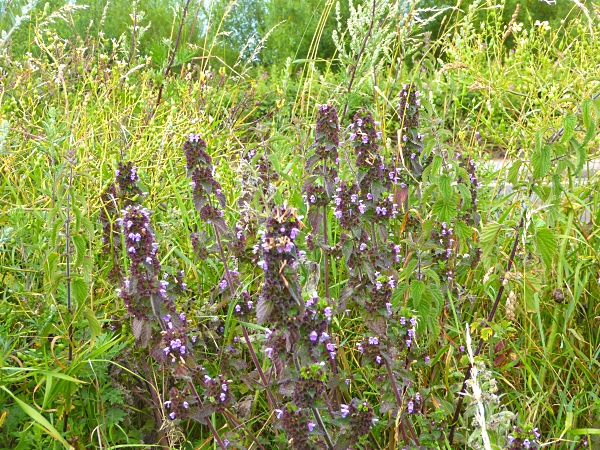 There was also plenty of Ragwort, but only one small patch had caterpillars. There were about four  plants, two on each side of the path. Did a single laying female put eggs in just this spot? The caterpillars were fatter than the ones we saw last week, looking almost ready to pupate and  twitching occasionally. 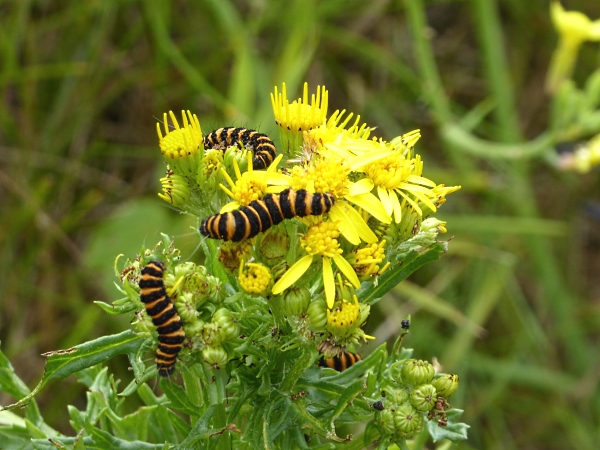 The sun was now out and several Gatekeepers were basking. The ones with the brown diagonal smudges on their upper wings are males, apparently. 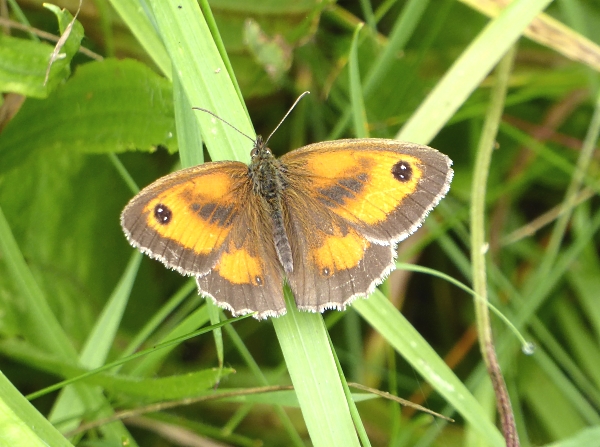 Sitting quietly and inconspicuously amongst the leaves was this handsome moth, possibly a Shaded Broad Bar, Scotopteryx chenopodiata. 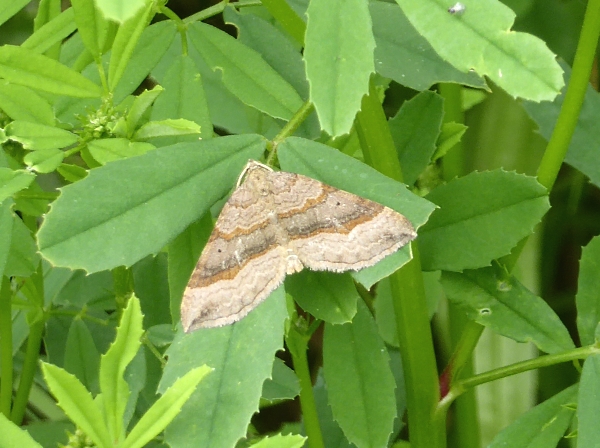 There were Red-tailed Bumble Bees visiting something very like Bramble, but growing far less aggressively, so I think it was the dune specialist Dewberry. Also several pairs of mating Burnet moths, probably Six-spot, although they were quite entangled, making the spots difficult to count precisely. 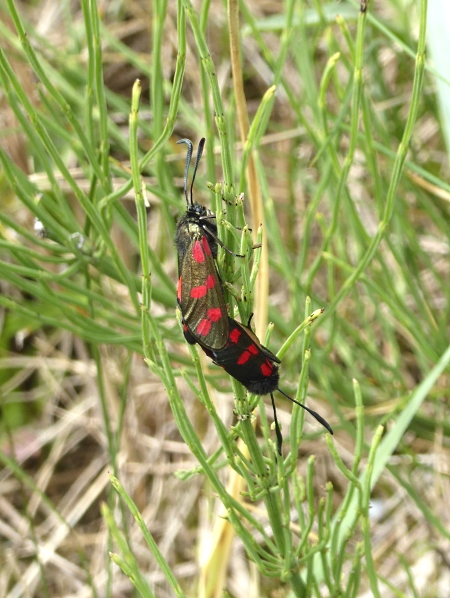 From Sandgrounders hide there were mainly BHGs, Coot, Moorhen and Canada Geese. Suddenly all the Lapwings from further out, and all the gulls, flew up but there was no sign of a predator. One Black-headed Gull parent had two chicks who were a little younger than all the others, and who were still pestering her for food. 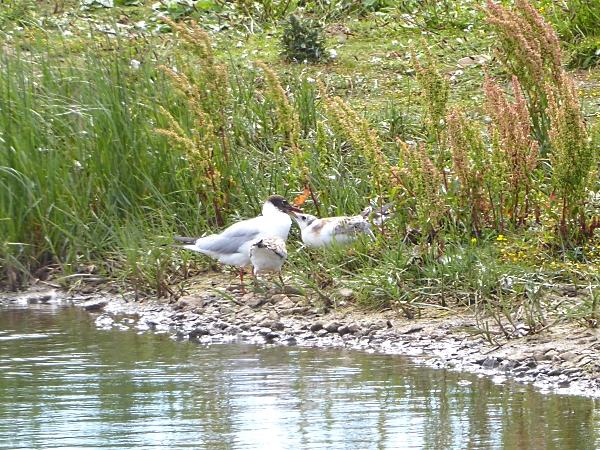 Then off to Nel’s hide. There was a herd of cattle there, of many mixed colours, doing some conservation grazing. A couple of Avocets had two well-grown chicks and were very twitchy and aggressive in protecting their young. First they saw off a Mallard, and then a mother Shoveller with two fluffy shovellettes. 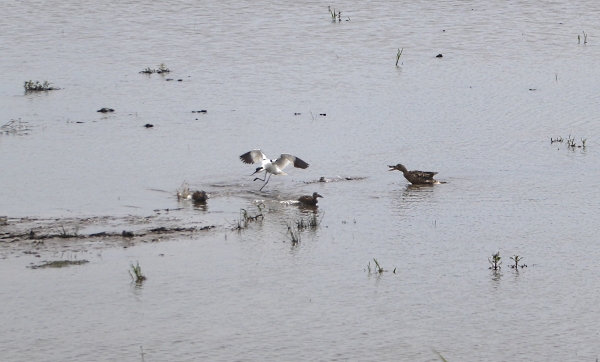 Then 100+ Black-tailed Godwits wheeled overhead and settled to the pool. They drove the Avocets frantic!  The Avocets kept on flying at the Godwits, trying to herd them away to the far side of the pool, and amazingly, they succeeded!

On the way back to Marshside Road we looked at the Duke of Argyll’s Tea Tree Lycium barbarum which grows on the bank here. It was flowering, and later it will have red berries which are attractive to birds. Apparently those berries are the much touted “superfood” Goji Berries, although I would be cautious with anything from the Solanaceae, which includes the poisonous Nightshade group. 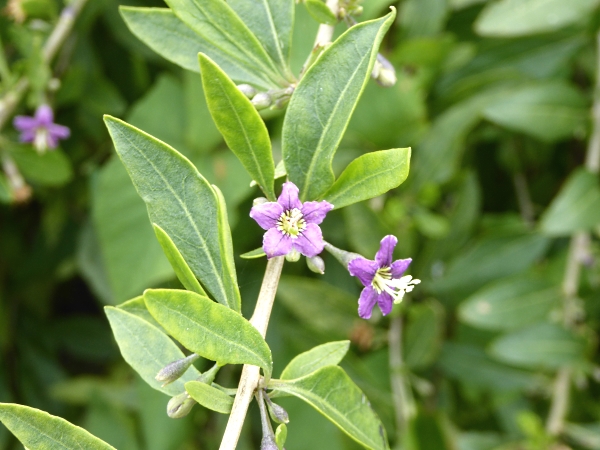 The volunteer in Sandgrounders hide had told us that the Glossy Ibis had been seen that morning near the corner of Marshside Road and the sea wall footpath, over the wooden pens and near the pond intended for Natterjacks. Sadly, no joy. We saw a Heron and a Collared Dove, but the Ibis was hiding or gone.  So we descended the bank into Pilling Close and spotted the Tree of the Day. It was a small Fir tree in a garden, about 6 or 8 feet tall and covered with cones. I think it was a Korean Fir Abies koreana. It’s “infrequent” and endangered in its native Korea, but sometimes planted in European gardens, because it doesn’t grow very tall and it bears abundant cones, even on young trees. 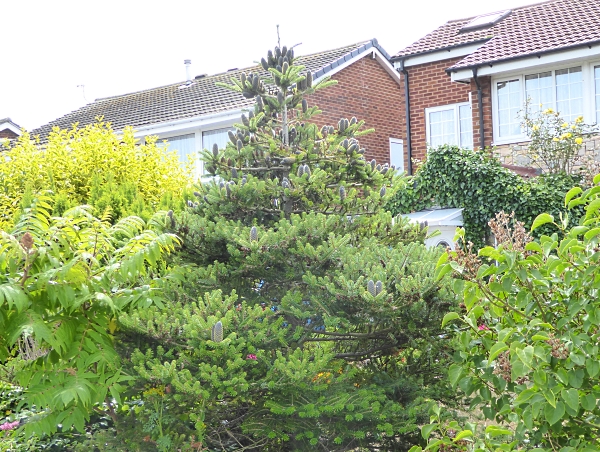