Near Mossley Hill Station, on the grassy central reservation between Templemore and Rathmore Avenues, which continue southwards as Brodie Avenue, is a group of trees called the Liverpool Thorn Collection. They are various rare relatives of the Hawthorn (Crataegus sp.) or Medlar (Mespilus sp.) and some are hybrids of the two. Five or six of them are listed on the Tree Register of Britain and Ireland (TROBI) as either County Champions of Lancashire for girth or height, or just as remarkable trees.  Here’s a map of roughly where the TROBI trees are. 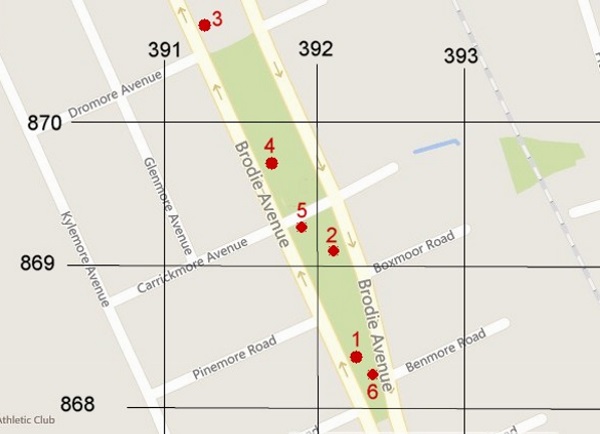 The first one we came to, marked number 3 on the map, was Crataegus x grignonensis, commonly known as the “Grignon Hawthorn”, which originated in France in 1873 and whose parentage is disputed. It had quite old and gnarly bark, and unlike Hawthorn, there were flowing sprouts coming straight out of the trunk. It is the county champion for girth at 99 cm, the five figure grid reference is  SJ3912387078 and it bore the identifying tag number 13819. 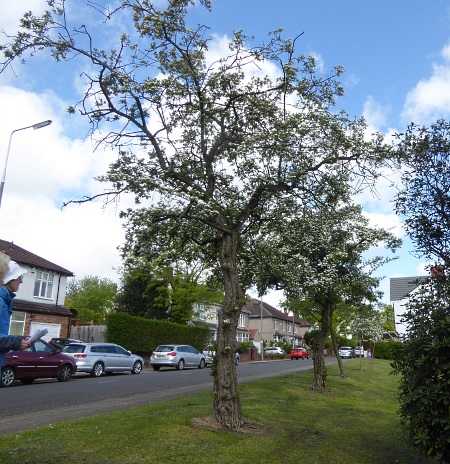 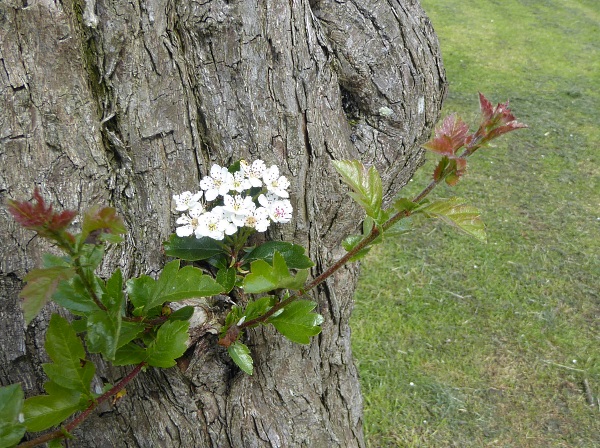 The next one, marked number 4 on the map, was a Common Medlar, Mespilus germanica. It was a handsome and well-shaped tree, with large single flowers and plain oval leaves. Its fruit has been cultivated since Roman times, although it is rarely harvested nowadays. It is unusual in being available in winter, and in being eaten when “bletted”, or allowed to soften and partially decay. It is the county champion for girth at 104 cm and the five figure grid reference is SJ3916986973. I didn’t notice a tree tag number. 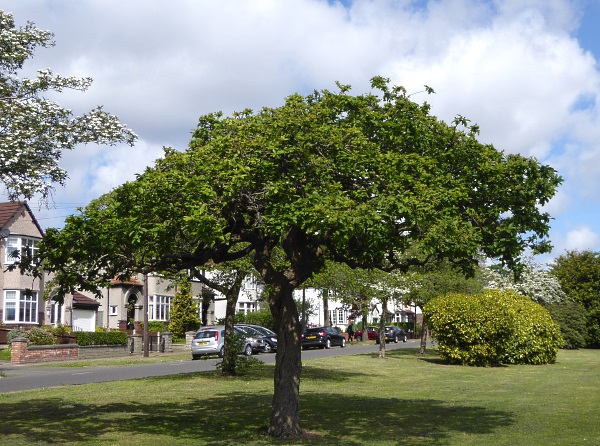 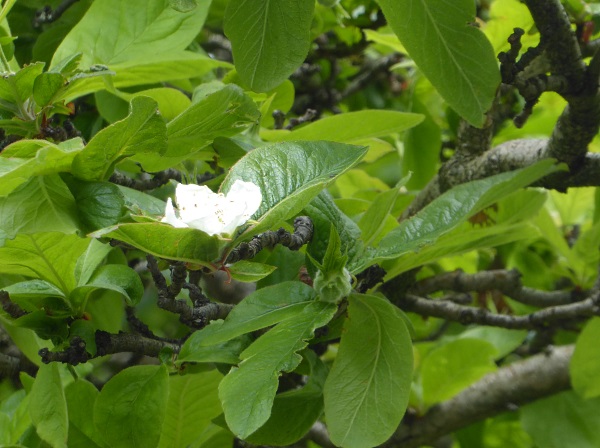 The one marked number 5 on the map was X Crataemespilus grandiflora, which is a hybrid between two genera, Crataegus (the thorns) and Mespilus (the medlars).  It was another one with big single flowers and plain leaves. Although not a champion tree, TROBI lists it as “remarkable”.  The five figure grid reference is SJ3918886935 and it bore the tag number 13772. 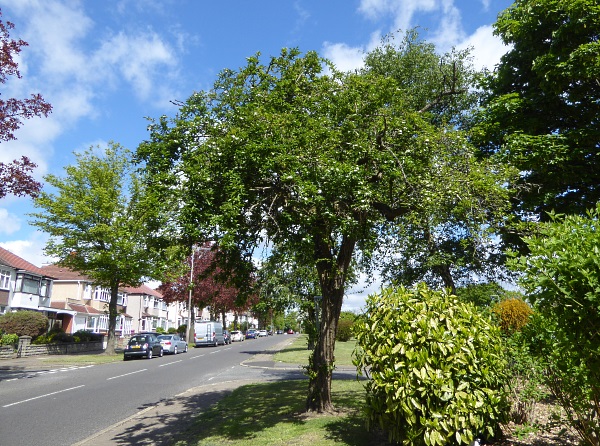 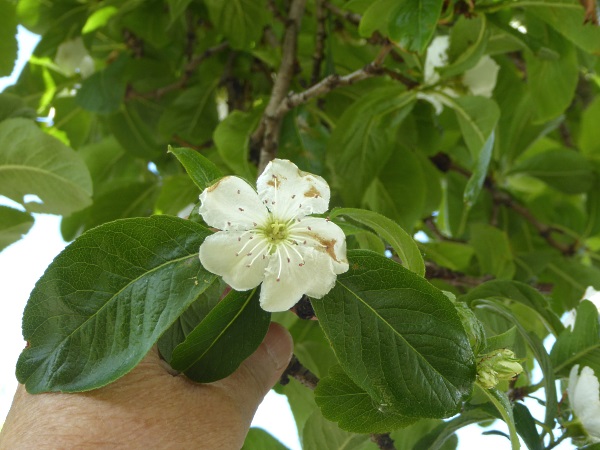 The next one, marked number 2 on the map was Crataegus chrysocarpa, a species of hawthorn that is native to much of the continental United States and Canada, where it is called Fireberry hawthorn or Goldenberry hawthorn, after the colour of the unripe fruit. We will have to come back in the autumn to look at that! The tree was recumbent (lying down) and had some coloured ribbons tied to its branches as if local people were using it as an old fashioned pagan wishing tree. It had clusters of small flowers like our Hawthorn, and very similarly-shaped leaves. This is also listed by TROBI as “remarkable”. The five figure grid reference is SJ3921886902, but I didn’t see a tree tag number. 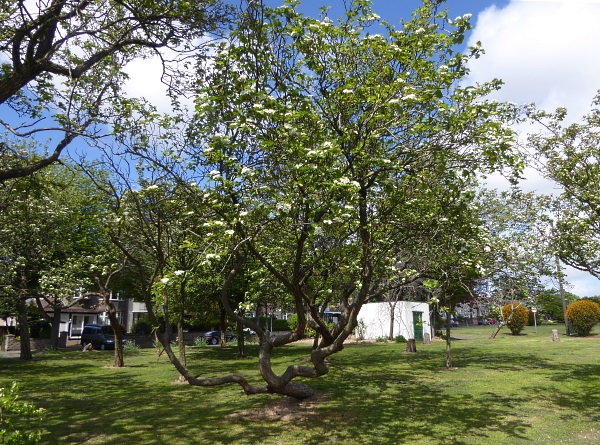 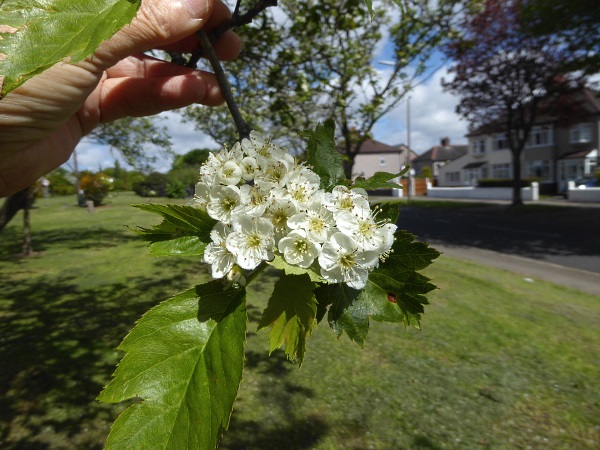 We had difficulty identifying the trees marked on the map as 1 and 6. Number 6 was another grandiflora, the same as number 5, so we weren’t too worried about that, but we’d have liked to find the other one, Crataegus azarolus, known as the Azerole or Mediterranean Medlar. One for the autumn, perhaps. We cut up Arranmore Road to Kylemore Avenue and found the gap in the wall opposite Pinemore Road, and walked up Holt Field, heading for Sudley Hall. There were Magpies and Crows on the open grass, and a Large White butterfly went past. Then we looked back and saw two Manna Ash (Fraxinus ornus) in flower at the edge of the field, so went back to look at them. They are between Pinemore and Carrickmore, and although they have the pinnate leaves and grey bark of the Common  Ash, they also have amazing fluffy white flowers, like Russian Vine. 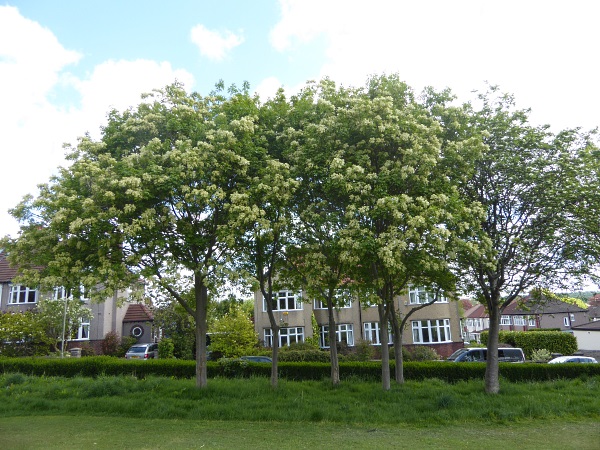 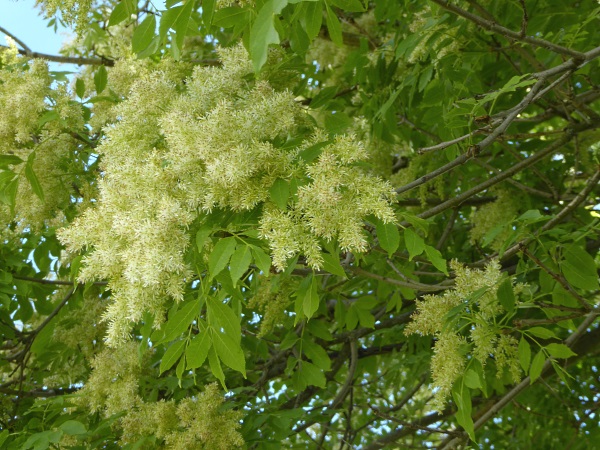 From the top of the field there are good views south to Frodsham. The Turkey Oak catkins are drying out but hanging on, while the Norway Maple is already showing its immature winged seeds. Near the entrance to Sudley House a Sweet Chestnut was just coming into leaf, which makes it one of the last. A Speckled Wood chased a Large White into the shrubbery near some bright red Rhododendrons. 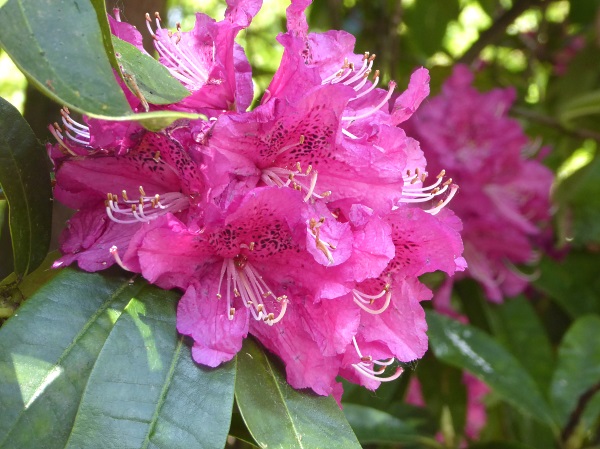 We lunched in bright sunshine in the Rose Garden at the back of Sudley House then explored the trees in the grounds. A pair of venerable Beeches flanked the path around to the front. 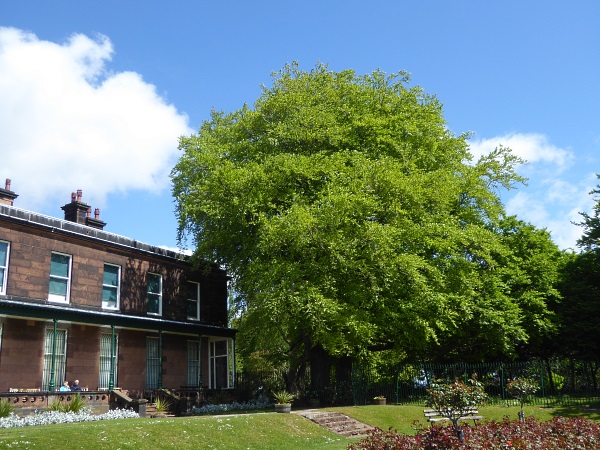 There was a Tulip Tree on the east lawn next to a blooming Laburnum. The Tulip Tree is very tall, with a double trunk.  Its flower buds were hardly further developed since the ones we saw in Port Sunlight Dell two weeks ago. Still several weeks to go before it flowers. 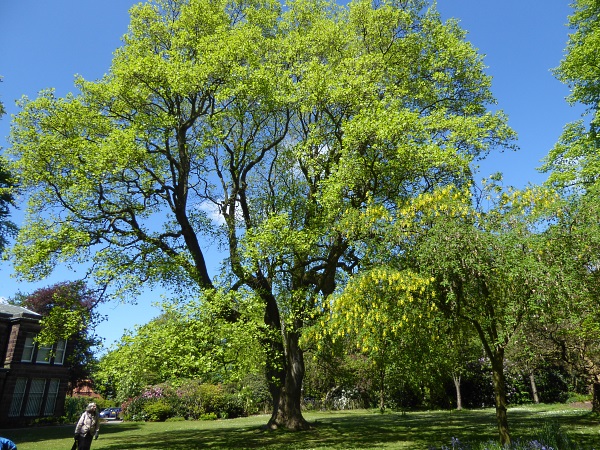 Then we walked around to the old walled garden. There were Bat boxes in the trees, and Garlic Mustard / Jack by the Hedge at the side of the path. Swallows zoomed about over the lawn. Two Goldfinches were pecking about in the old Ivy stems, perhaps looking for insects for their chicks. There were some raised beds where local schoolchildren were growing vegetables – beans and rocket and strawberries – in the “Growing Sudley” project. As we were on the way out we spotted this tree, looking just like an old English Elm, which were all killed by Dutch Elm disease. Was it a rare survivor? No, sadly it was an atypical Sycamore, not bearing any flowers that we could see, with leaves that were subtly different. Perhaps it was just a very old tree. 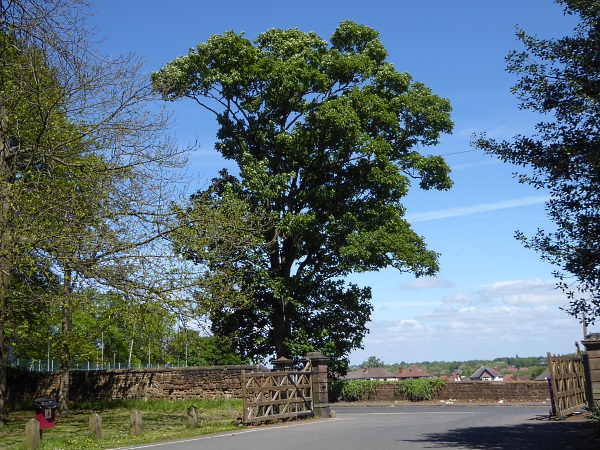 Public transport details: Bus 80A from Great Charlotte Street at 10.15, arriving Templemore Avenue/Rose Lane at 10.37. Returned on 80A from Rose Lane opposite Avonmore Avenue at 14.22, arriving Renshaw Street 14.45.