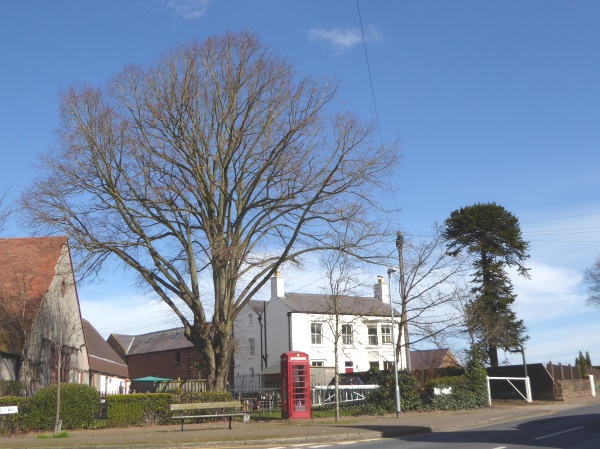 In Thornton Hough village there’s a tall old Monkey Puzzle tree Araucaria araucana (on the right of the white house). It’s not the tallest on the Wirral, which honour is held by a tree south of Arrowe Country Park, near the junction of Pensby Road and Mill Road, but this one must be close. There’s a Rookery in the village, too, behind the corner building called The Store. 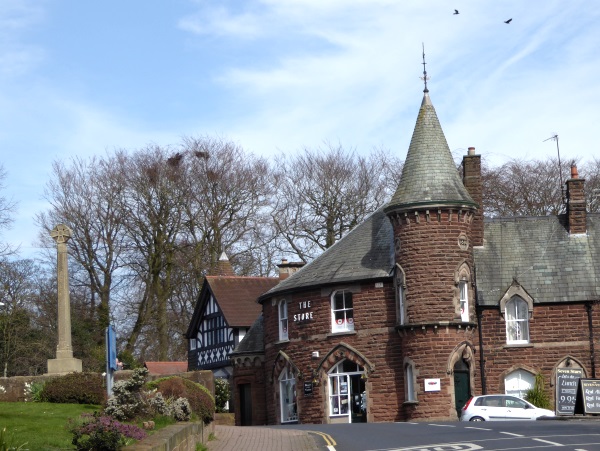 We walked north along Thornton Common Road, noting a Greenfinch and two Great Tits, then turned left at Crofts Bank Cottages, and right onto the footpath across the fields to Brimstage. The first field was sown with grass for silage, then several fields of Oil Seed Rape, some in flower and some just coming out. 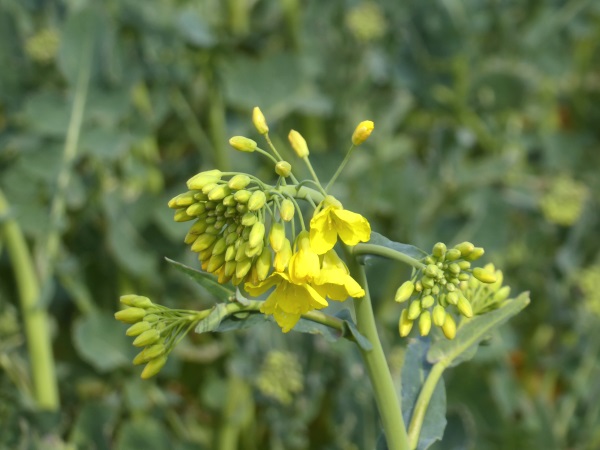 The paths were lined with Lesser Celandine, still closed until the sun came out. A Wood Pigeon flew by and a Skylark launched itself into the air, singing its heart out. In the trees were Goldfinches, and then a Yellowhammer. Completing the yellow theme, was a clump of Yellow Archangel in a shady corner. The native plant is Lamiastrum galeobdolon subsp. Montanum, which has plain green leaves and is found mainly in the south, but these were the naturalised garden escapes, subsp. argentatum, with the white marks on the leaves. It has spread rapidly in the last 30 years and was pronounced an invasive alien in 2013. 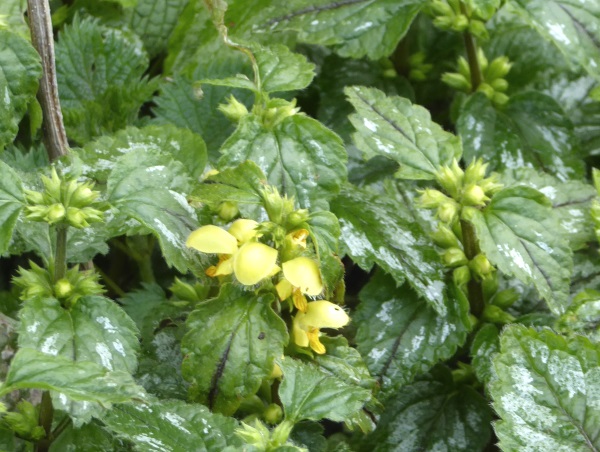 We lunched by some ponds, hearing a Nuthatch and a Chiffchaff. There was a Robin on a gate. Back on the path, we noted a cluster of about ten Oak apples on a twig on the verge, which we thought was a broken branch, but it was a very small rooted tree. Never seen so many Oak Apples on a tree so small. The Blackthorn was out. 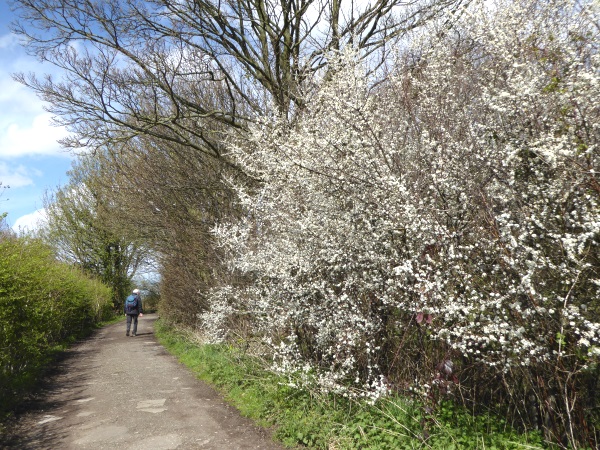 In the sunshine on a sheltered bank there were butterflies on wing. We found a Small Tortoiseshell and this Peacock. 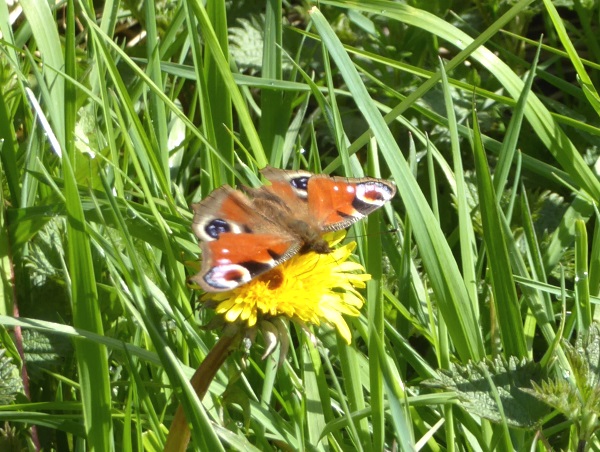 There was also a Red-tailed Bumble Bee on a Dandelion. 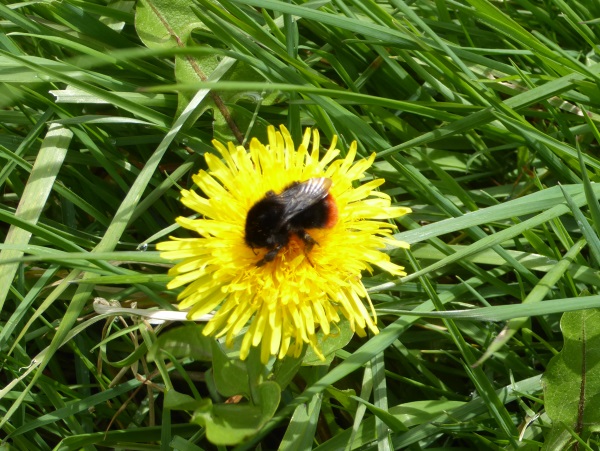 We heard a Pheasant, but we still haven’t seen one. By the base of a tree a splendid patch of Lesser Celandines was open. 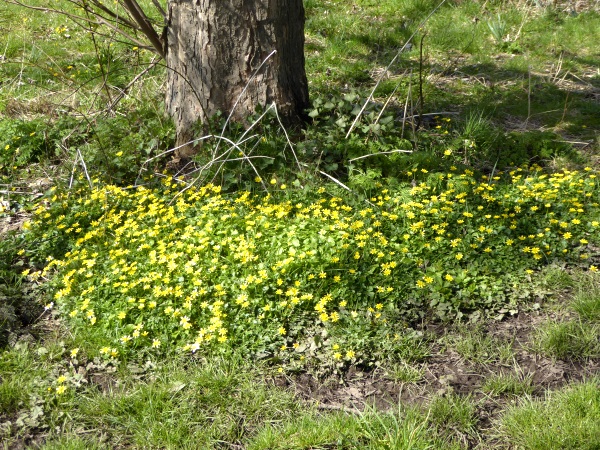 Near Brimstage a cowpat had several Yellow Dung Flies Scathophaga stercoraria.  They look like males to me, because the females are greener. They don’t eat the dung themselves but lie in wait and predate other flies which come visiting. The females lay eggs in dung, too, so the males have a second reason to hang around there. 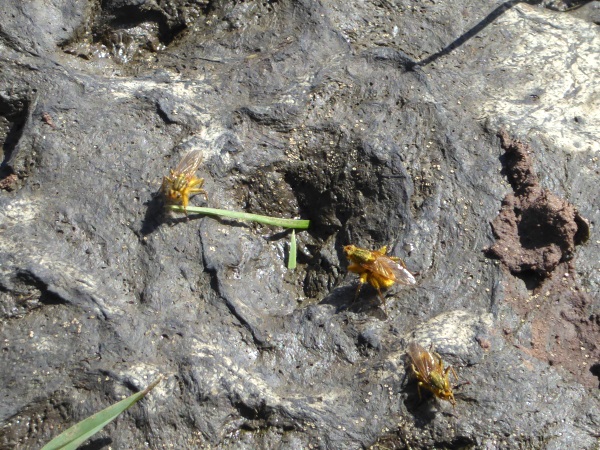 Where the path emerges onto Brimstage Road there’s an Ash tree with a huge distorted base to its trunk, where the roots have become exposed. 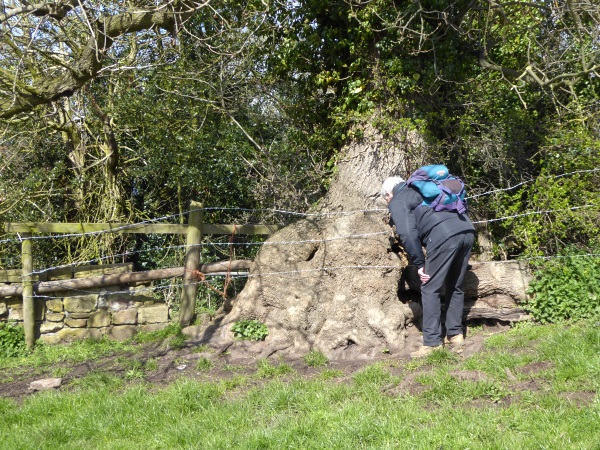 Over the road is a straggly-looking Larch, showing its cones of last year and red firework flowers. 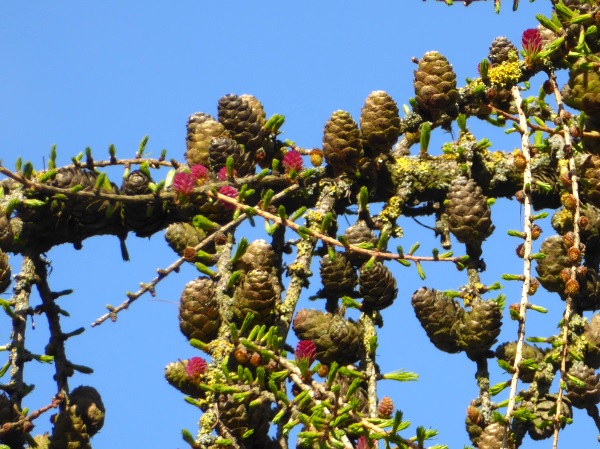 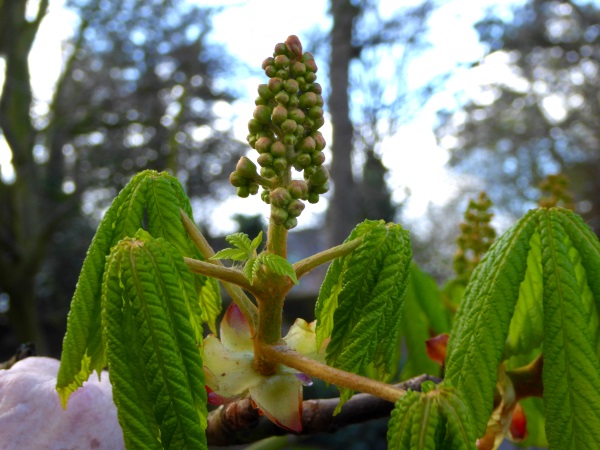 Swallows often nest in Brimstage courtyard, in the tunnel over the stairs, but there was no sign of any today. Then we set off again back to Thornton Hough, noting Coltsfoot and Red Dead-nettle near the Maze. Some Carrion Crows were attacking a Buzzard. The path off Talbot Avenue was  very muddy, and we had to manoeuvre through the hedges around the miry bits, and why are there always spiny Bramble, Holly and Hawthorn just there?  That slowed us down, so we didn’t get back to Thornton Hough until 5 to 3, having missed the return bus by 10 minutes.