I took myself to the National Memorial Arboretum near Lichfield on a Timewells coach trip, attracted by the promise of yet more interesting trees. It turned out to be a bit of a let-down, because the managers of the site appear to focus 95% of their attention on the memorials to all conflicts since the Great War, and haven’t quite got the hang of being an Arboretum yet. It definitely won’t be worth an MNA coach trip for several years.

The 66-page guidebook, which I didn’t buy, expended 64 pages on pictures of memorials, and two pages of very large text, headed “Trees” and mentioning the Douglas Fir pillars in the Chapel, their “rescue” groups of Grecian Fir and Serbian Spruce, and very little else. There were some leaflets in a rack with themed self-guided walks, such as “animals” (on the memorials), “children’s activities” and so on, but (unbelievably for an arboretum) there was no walk themed on special trees. The gift shop was selling a lovely tree calendar, but they were American trees, for heavens sake! I suggested they might hire a photographer and produce a calendar with photos of trees from the arboretum itself. Happily they said they had already had that idea. Even the lady in the entrance lobby, whose job it was to answer visitor queries, and who seemed genuinely to care about the planting and labelling of interesting trees, wanted to tell me about their avenue of Horse Chestnuts. Thanks, but I have seen plenty of Horse Chestnuts before. (They turned out to be spindly little saplings, anyway.) However, she did direct me to two areas with some promise of interest, which turned out to be worth the trip.

They have over 40,000 trees, all young and mostly of common species. Far too many of them are planted in straight lines. There are very few specimen trees with botanical markers, and even those markers aren’t quite up to snuff, with the species part of the Latin binomial often sporting an incorrect capital letter. Hundreds of trees have small name tags on them, but they turned out to be either the name of a deceased soldier, in whose memory the tree was planted, or a marker for a particular regiment or corps. All very fine, but most distracting when you are looking for real tree labels.

In area 6 at the north end, I found my first botanically-labelled trees. They turned out to be easy to see because they were tiny pines, each surrounded by a little protective corral about 18 inches high. 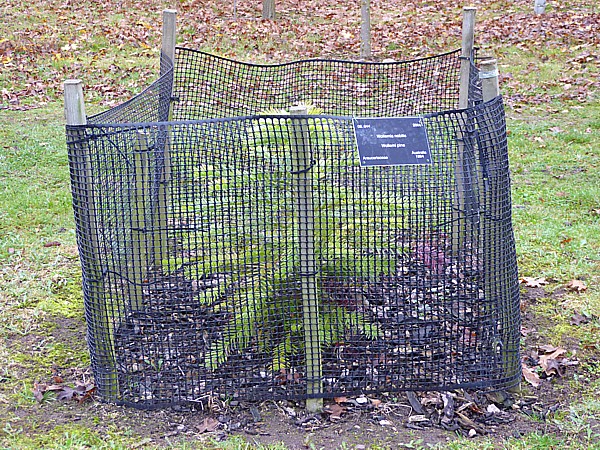 To my delight, one was the critically endangered Wollemi Pine Wollemia nobilis which is more closely related to the Monkey Puzzle than the Pines. A lifer! To be sure, I’m only just starting to learn about trees, and there will be plenty more lifers for me in the future, but I think I was just as excited by this little tree as a birder would be when spotting a rare vagrant. 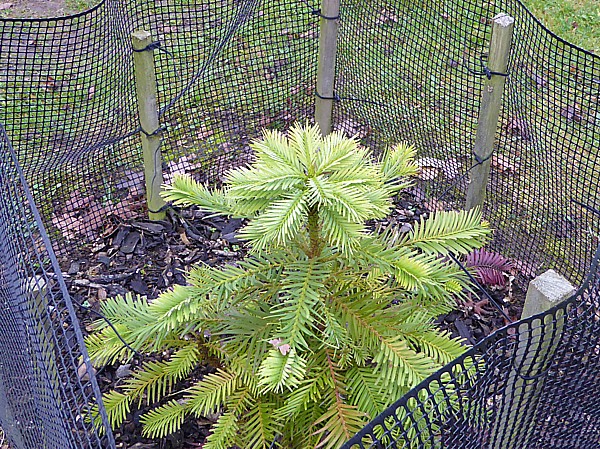 Then I walked alongside the River Tame, which had Mute Swan, Mallards, Tufted Duck and a Heron. They are making this a nature area, with a couple of owl nest boxes, a wood pile for insects and fungi, a sign about woodland habitats and a poster for identifying the leaves of native trees. They get good marks for that, although it’s early days yet. 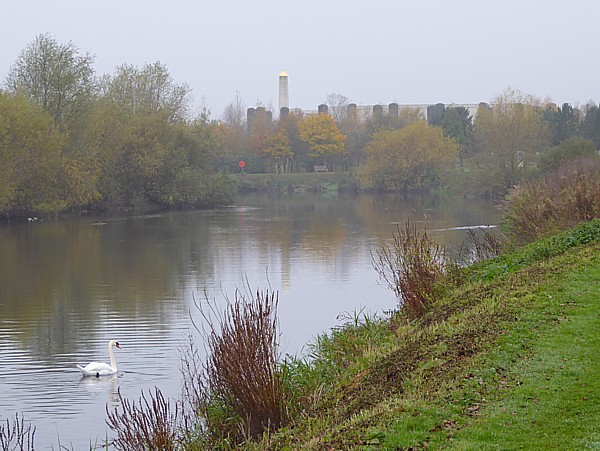 Along the riverbank were some unusual sculptures, which I thought were about parachutists, but which turned out to be a memorial from the Birmingham Children’s Hospital. 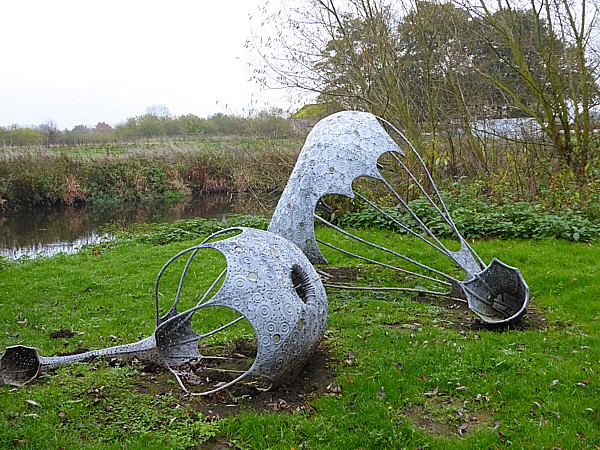 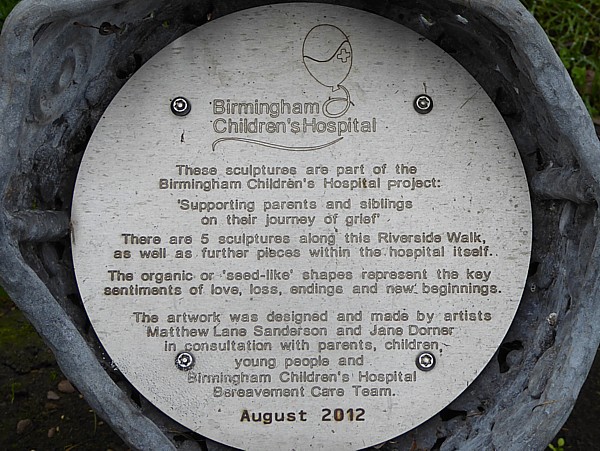 A very obliging Robin posed on a red-berried tree for me, then darted onto the grass and snaffled an earthworm which had come to the surface. 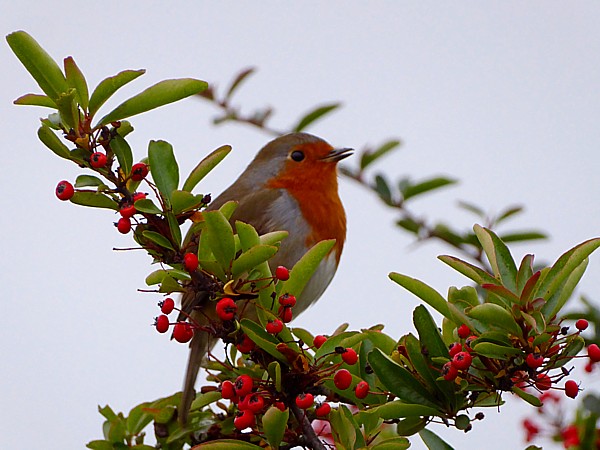 Area 5 at the western edge is themed on wars in the Far East. They have a section of the Burma Railway (the real thing, which has been shipped back to Britain). On the embankment were three different species of white-berried Rowans, which were one of the treats I had specially come to see.  None of them had botanical labels, so I took out my trusty tree book and set to identifying them. The Kashmir Rowan Sorbus cashmiriana was the one whose leaves had already fallen, and which bore just clusters of large white berries. 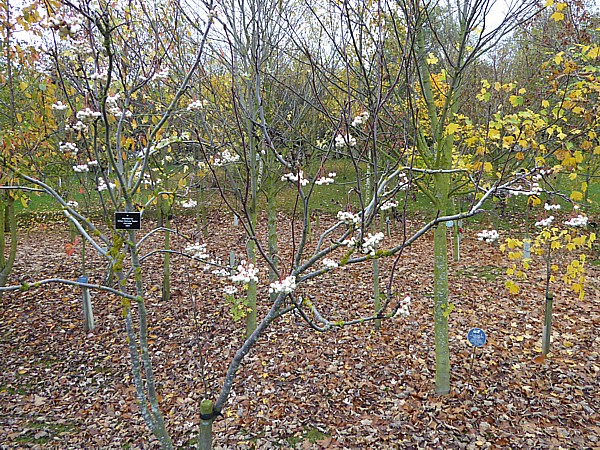 The leaves of Vilmorin’s Rowan Sorbus vilmorinii had very many small leaflets and had turned bright red. The berries were pinkish. 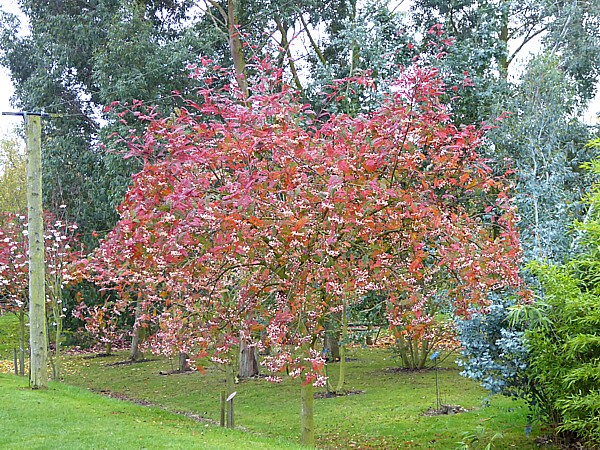 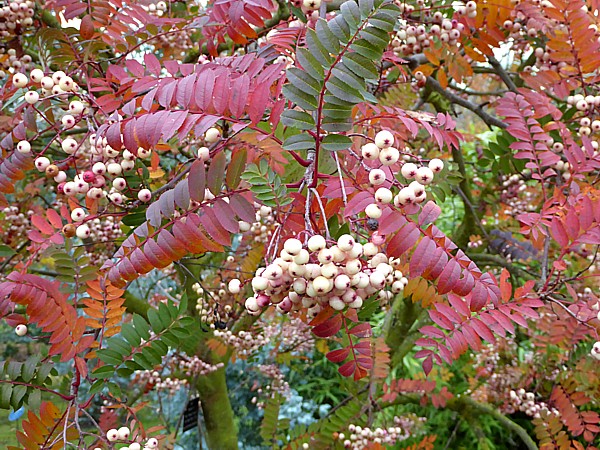 The Hupeh Rowan Sorbus hupehensis, my favourite, had grey-green leaves, still not turned to red, with pink and white berries. 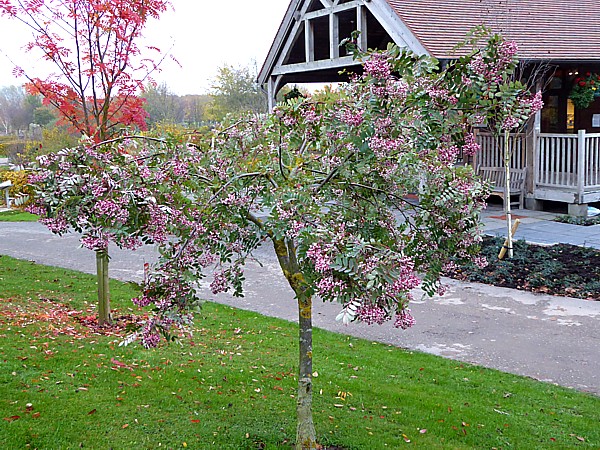 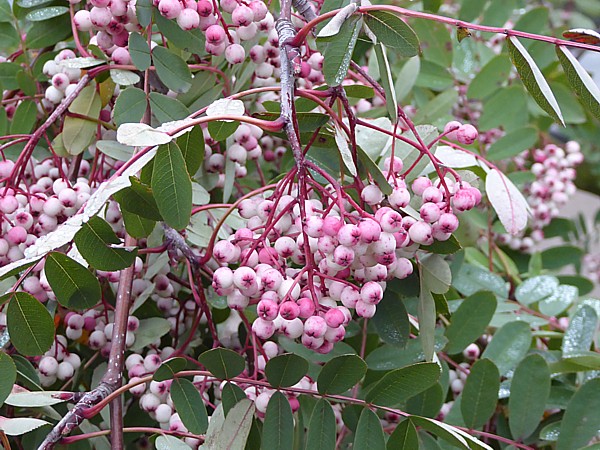 And I also spotted a real rarity, a Silk Tree  Albizia julibrissin ‘Rosea’, not even in Mitchell’s tree handbook. It has Mimosa-like leaves, and is supposed to have brilliant fluffy rose-pink flowers in the Spring. 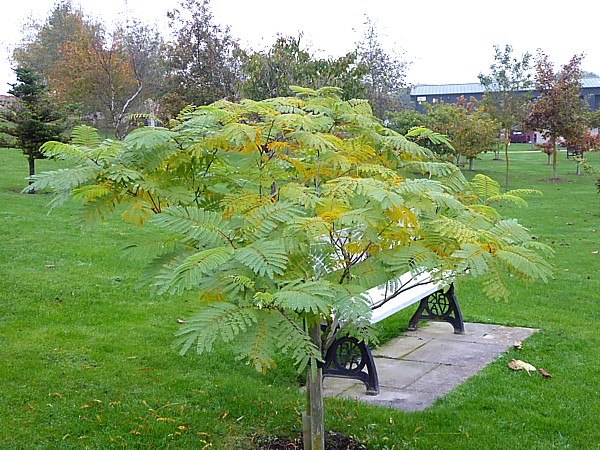