It was a breezy day, warm when the sun came out but cool and overcast in the woods. 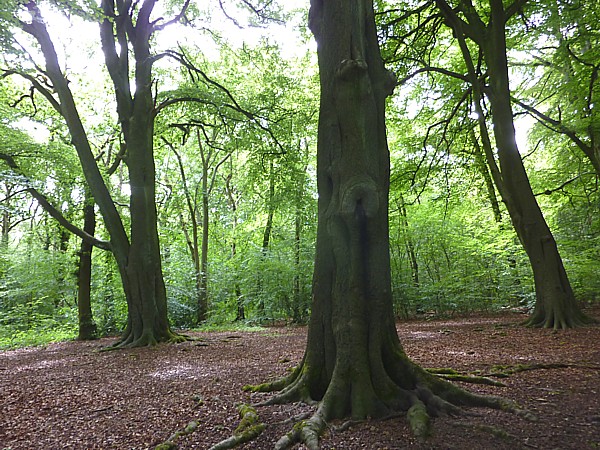 At the entrance to Childwall Woods there was a Lime tree with bright red nail galls starting to show. There used to be a tight pair of tall conifers on this corner, perhaps Lawson’s Cypresses, but one has been cut down, leaving the side of the other brown and dead. It may not fill in again. Where another stump used to be, there is now a Bramble thicket, being visited by a Bumble Bee, perhaps a worker Buff-tailed. 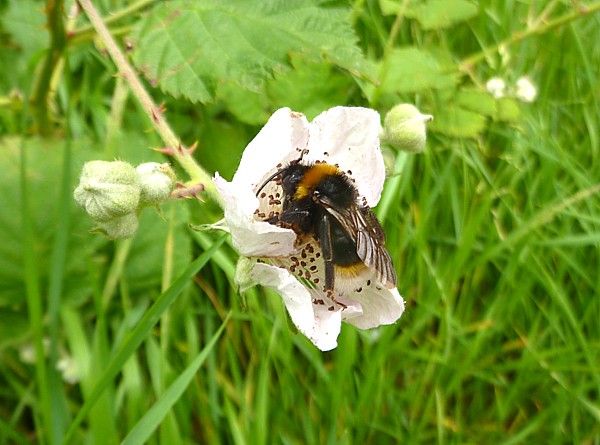 Childwall Woods are mostly Beech and Sweet Chestnut, with an understory of Rhododendron and Holly. Below that are Nettles, Brambles and masses of Wood Avens. Some Wood Avens flowers were still out, but plenty of heads of hooked seeds were hanging out into the paths, “hoping” to catch onto something to aid dispersal. I wonder what they co-evolved with? Wolves? Deer? 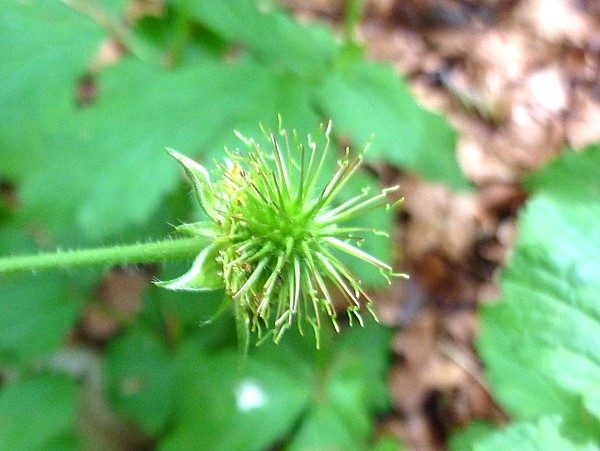 A fallen branch of Sweet Chestnut had over 20 holes in it, roughly circular, about 1½ inches (4 cm) across and only about an inch (2.5 cm) deep. The dead tree it had fallen from had a few more. They clearly weren’t nest holes, because they were too shallow. We speculated that they were holes made by feeding Woodpeckers. 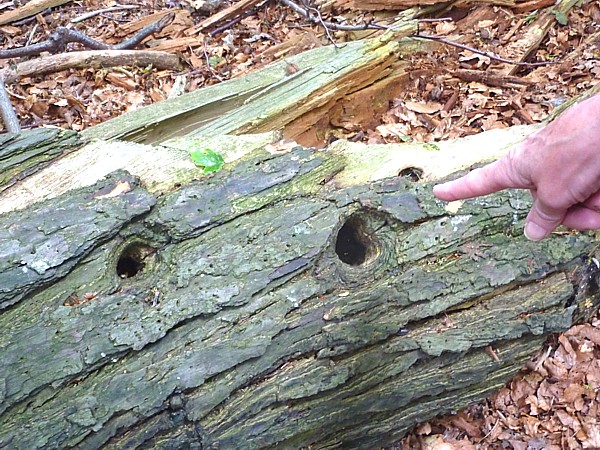 Under one leaf we found the tiny spider and egg-case Theridion pallens which the MNA found at Delamere in August 2013. Many Rhododendron leaves looked quite black and sick, and on the undersides we found these odd beige-and-white blobs. It’s the Cushion Scale Insect Pulvinaria floccifera, which the Americans call Cottony Camellia Scale. The fawn bit is the female insect and the white bit is the fluffy egg case. We found it later on Holly, too, so it clearly likes evergreens. Here’s another account of it from the “Nature Notes from Argyll” blog, with some photographed in Kent in 2007.   It’s also described on the RHS website. 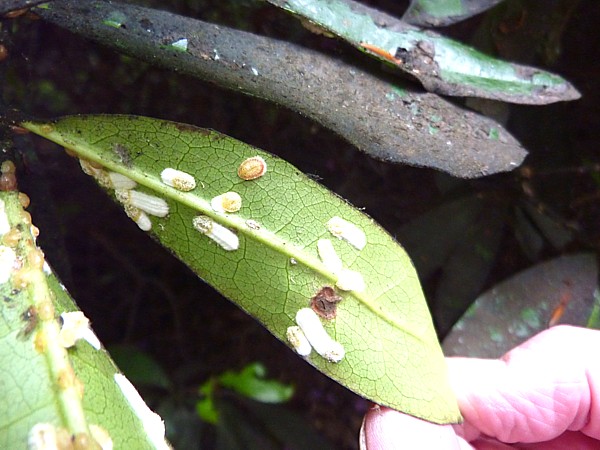 In a buttercup meadow near a tall Yew tree we spotted a Speckled Wood butterfly and this orchid. The leaves weren’t spotted, and we guessed Early Purple or Marsh, but we have no idea, really. 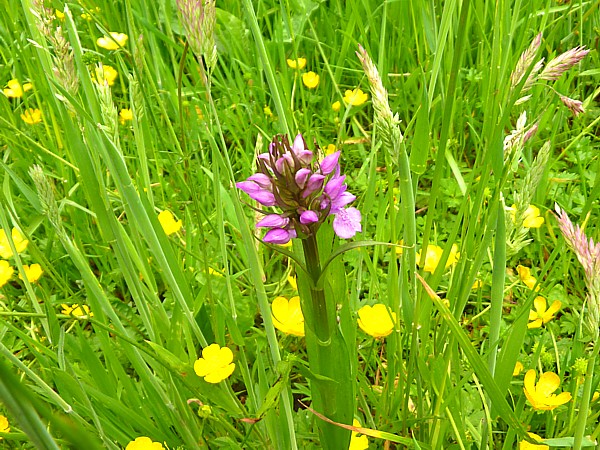 We had lunch in sunshine in the memorial garden at the far end of the graveyard of Childwall All Saints. A Greenfinch was calling and a young Robin was hopping about. There was a tall white Foxglove by the fence, and the Bird Cherry tree was coming into flower. 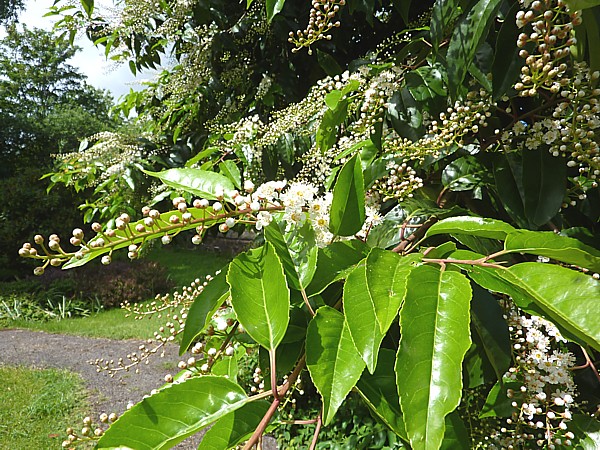 By the church we spotted the OS bench mark carved into the church wall, the Leper’s Squint and a lovely red Japanese Maple tree. In amongst the graves were large clumps of the wildflower Fox and Cubs. 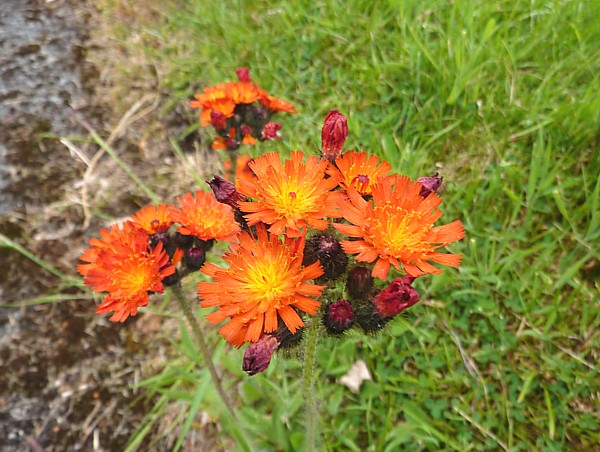 As we made our way back to the woods we noted a mass of Hop Trefoil along the north side of Childwall Abbey Road, beyond the pub. Back in the woods we heard a Chiffchaff and possibly also a Song Thrush. It was doing repeats in threes and fours, but wasn’t very melodious. Perhaps a young one practising? Through the cathedral-like avenues of big old Beeches we came out into Childwall Fields, hearing calls of Crow and Chaffinch. There were more orchids here. The pair had plain leaves, while the more pointy one was spotted. 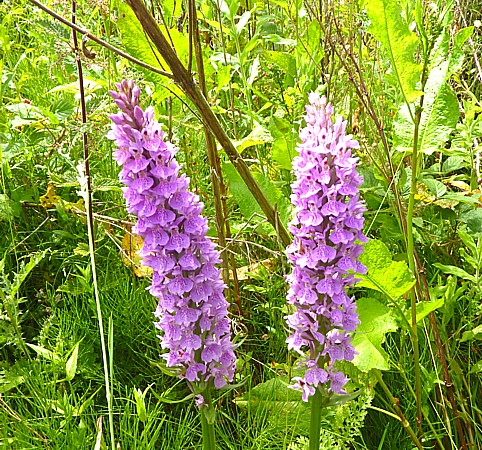 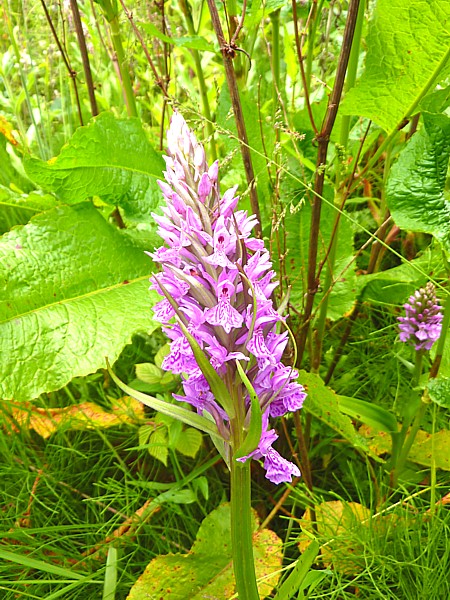 There was plenty of Hogweed, smelling of the pigsty, and a great view eastwards past the pedestrian bridge over the motorway. Three churches were in view. The dark tower was Huyton Church, the “spire on a tower” on the skyline was Prescot Church, but the plain spire on the left remains unidentified. (Added later – probably Roby St Bartholemew.) There were a dozen or more orchids in a buttercup patch further down the bank, but it was too steep for us to dare it. Back in the woods, we looked at the coppiced Hazel, but there is never any sign of nuts forming. I wonder why not? Before we went for the bus we had a quick walk through the Black Wood, with more Beech and Sweet Chestnut, Bramble and Wood Avens. All the Bramble in both woods was rather strange-looking, with narrow petals. The only decent flowers we’d seen all day had been in the sunny Bramble patch when we set out. Perhaps this is how they grow in deep shade? 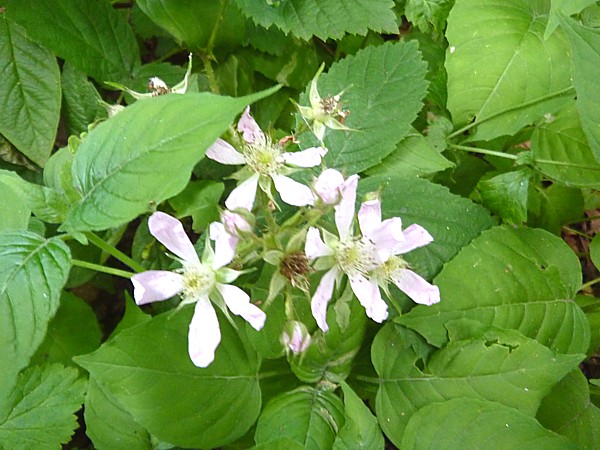 A Bumble Bee was attempting to dig a hole under some shrubs, but gave up and walked off looking for softer ground.  The big old Beeches here may be reaching the end of their life. One had started to drop branches, and another had a group of bracket fungi high on the trunk. We couldn’t see the tops of them, but the undersides were very pale and smooth. Perhaps the Hoof Fungus? 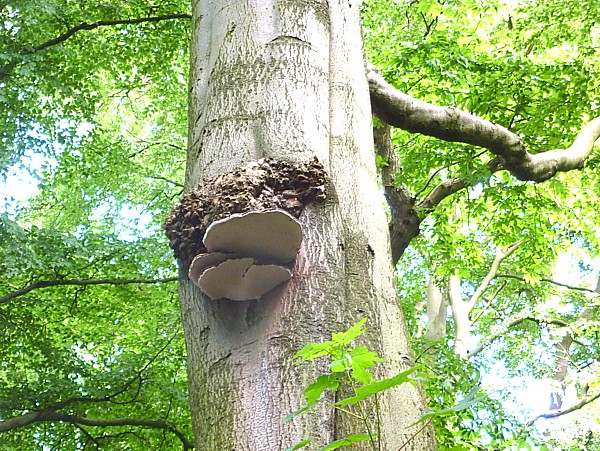