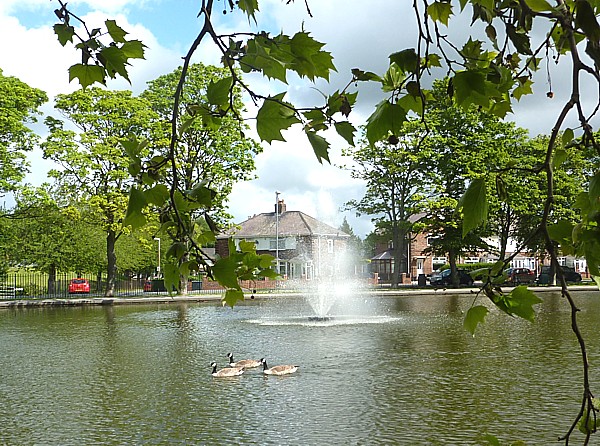 At last, a sunny day, but it’s still not as warm as it should be. Victoria Park is just down the road from Widnes station, with a small lake and a fountain. There was a big group of juvenile Herring Gulls in a gang on the on the banks of the lake, perhaps last year’s chicks, with no adults to be seen. On the lake were Mute Swans, Canada Geese, Black-headed Gulls, Moorhens and Coots. The male Mallards are just starting to moult. A Mute Swan was showing off three very cute cygnets, and her nest was in the reedbed at the eastern end of the lake, with last-year’s juvenile still hanging around. 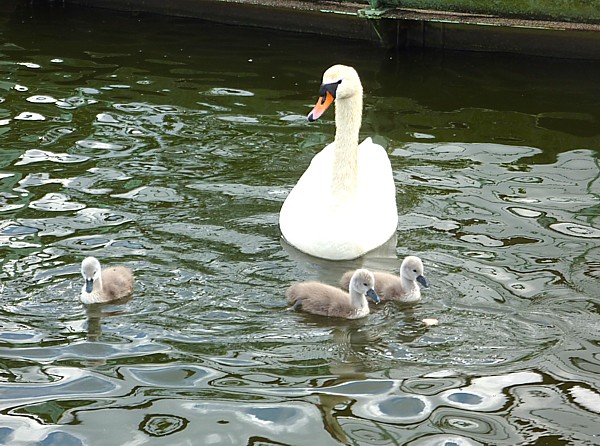 The park has a Green Flag, and is well-stocked with visitor amenities – a children’s play area and swings, an ice cream parlour, a bandstand, a Café, exercise machines dotted about, a skateboard park, where two lads were swooping skilfully on small scooters and a climbing boulder, for which you would need very long legs. (Yes, one or two of us tried it – but not me!) 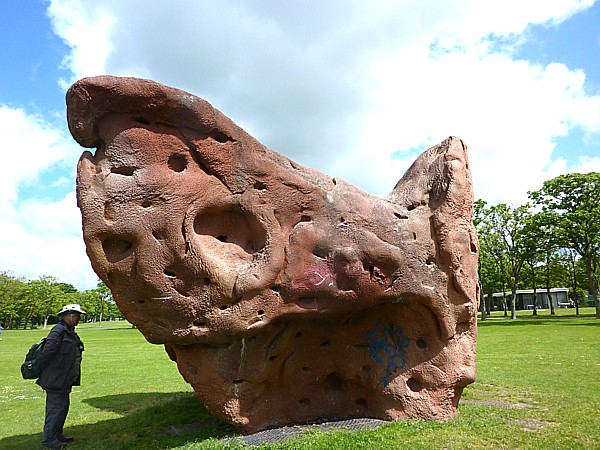 The greenhouses near the southern end are supposed to be open to the public and one is said to specialise in butterflies. Sadly, they weren’t open. We met a ranger who said they are having some work done, but he will ring us when they are open again. There was a Mistle Thrush on the lawn, and the imposing War Memorial has ornamental trees at two corners, which were Weeping Beeches, most appropriate. 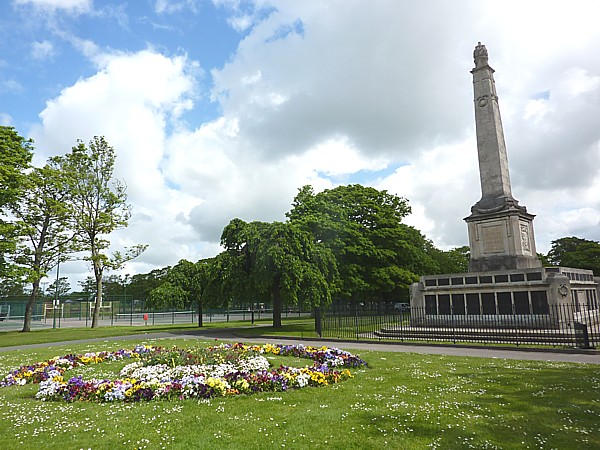 Also sited here is an old milepost bearing the scars of a WWI Zeppelin raid. The informative sign says “Zeppelin Bomb Damage: This was the fifth milestone standing beside the A57 Prescot to Warrington Road at Bold on 12th April 1916, when five German Naval Zeppelins made the last effective airship raid on England. Zeppelin L61 from Wittmundhaven, commanded by Kapitanleutnant Ehrlich with a crew of 19, crossed our coast at Withernsea and flew almost to Crewe before turning north and crossing the Mersey at 18,000 feet above Halton. At 11.17 pm the first of its bombs fell, damaging the milestone, the road surface, a water main and doing some minor damage to adjacent property. There were no casualties here. A second bomb dropped three minutes later made a crater seven feet deep and fifteen feet across in a field at Abbots Hall Farm, Bold. The Zeppelin went on to bomb Ince and Wigan before returning safely to her base. The night was dark and overcast, added to which the effectiveness of the official blackout prevented accurate navigation, so that the airship commander reported in his log that he had bombed Sheffield. The light from blast furnaces of the Wigan Coal and Iron Company, which had received no air raid warning, attracted L61. Seven people were killed and twelve wounded at Wigan, and a further four injured at Aspull. The milestone was kept for many years in Victoria Park at Widnes as a reminder of the second of the only two Zeppelin raids in Lancashire ” 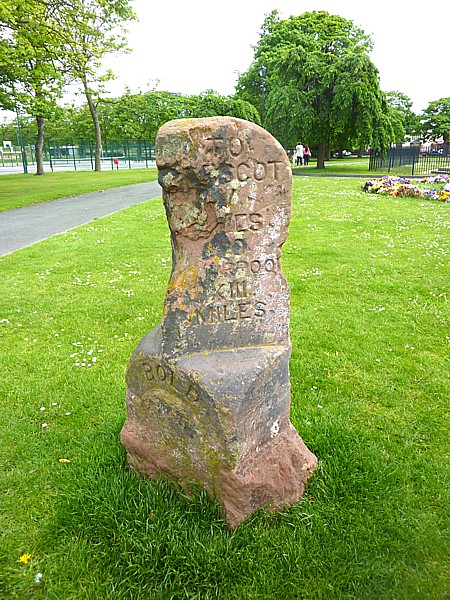 We lunched at the southernmost end of the park, near Appleton Village. A small apple tree in the centre of the circular lawn had patches of white fluff on the bark, which appeared to be caused by the Woolly Apple Aphid Eriosoma lanigerum, also known as American Blight. 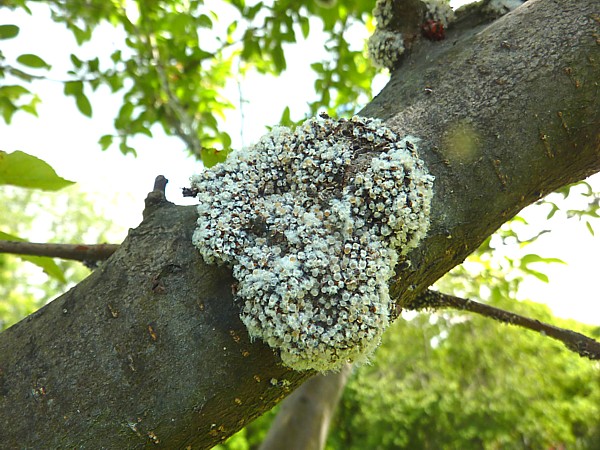 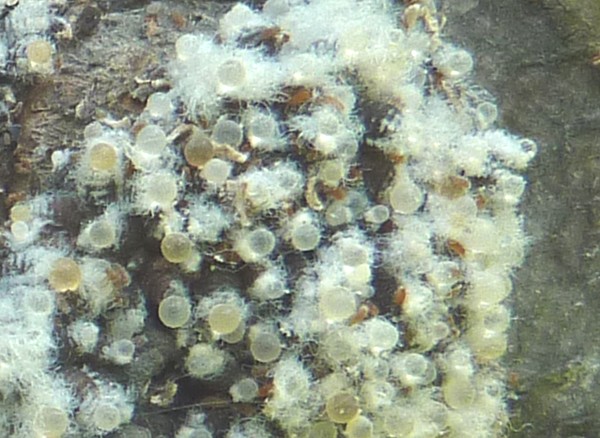 The tree expert Alan Mitchell, who hates Red Horse Chestnut, also has an aversion to Copper Beeches, complaining that they disfigure our landscape and are grossly overplanted. He does, however, relent a little for the “superior dark red form” of the cultivar “Rivers Purple”. The one in the park was a very dark and handsome tree, so it may be of that better type. 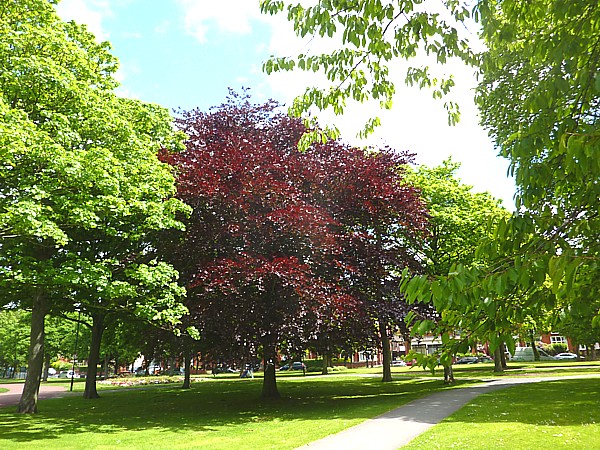 The western edge of the park has a wildlife area and woodland walk. There was a thick carpet of  Daisies as we entered the shady area, and alongside the path were Forget-me-nots, Buttercups, Wood Avens, Red Campion and Elder just coming into flower. There were Blue Tits, Great Tits, Coal Tits and a Blackbird, and a several Grey Squirrels. One bench had a lovely carving of a sleeping squirrel. 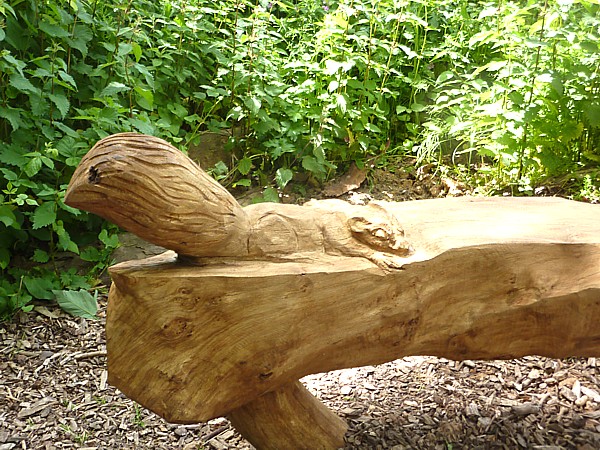 High in the trees were bird- and bat-boxes, one with its entrance hole roughly damaged, possibly by a Woodpecker.  In the sunnier areas we noted a Speckled Wood butterfly, a White-tailed Bumble Bee on the Rhododendron and Field Maple and Hornbeam in the hedge. Last time we were here I was impressed to see a Bat hibernaculum made of paving setts. There used to be a sign up about it, but that’s gone, and the top of the structure is damaged and open, allowing litter to accumulate, like a plastic spoon and a bottle top. It doesn’t seem to be considered viable any more. 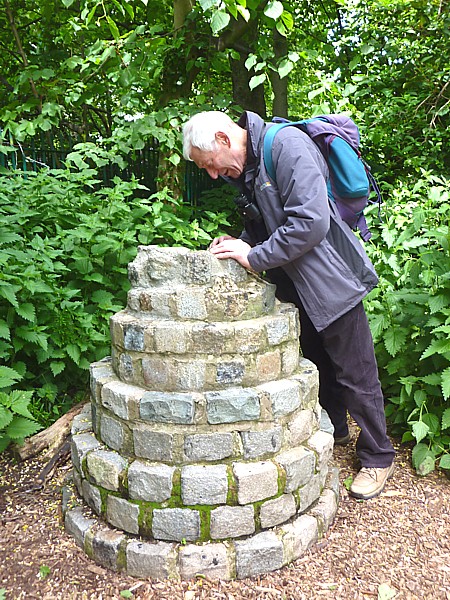 We were in time for a Brass Band concert by Mereside Brass, who were very good, with an interesting repertoire, a change from the usual brass band fare of military marches. They played The Pink Panther, Georgia on my Mind, Spartacus (the theme from Howard’s Way), Cruella de Vil, Game of Thrones theme, Niebelungen March.

At Widnes Station on the way home we looked for the plaque saying that Paul Simon wrote Homeward Bound on the platform while waiting for the early-morning train back to London. It wasn’t there, but we saw a couple of places with empty screw-holes where it could have been. Has someone nicked it?  There is a picture of it on this Wikipedia page.

Public transport details: 10.26 train from Lime Street Station towards Manchester, arriving Widnes 10.55. (There’s a fare of £1.30 to pay for going one stop outside the Merseytravel area.) Returned from Widnes station on the 14.17 train, arriving Lime Street 14.50