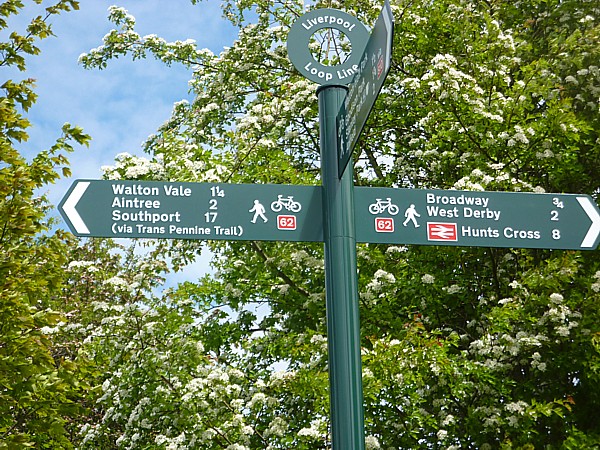 The last day of May started out overcast, cool and windy, with occasional drizzly showers. So much for spring! We crossed Rice Lane Recreation Ground and rejoined the Trans-Pennine Trail on the far side, close to the old chimney of Hartley’s Village. A Blackbird and some Magpies were foraging on the grass, the Bramble was just budding, and flowers included Buttercups, Cow Parsley, Lupins, early Elder blossom and Comfrey. 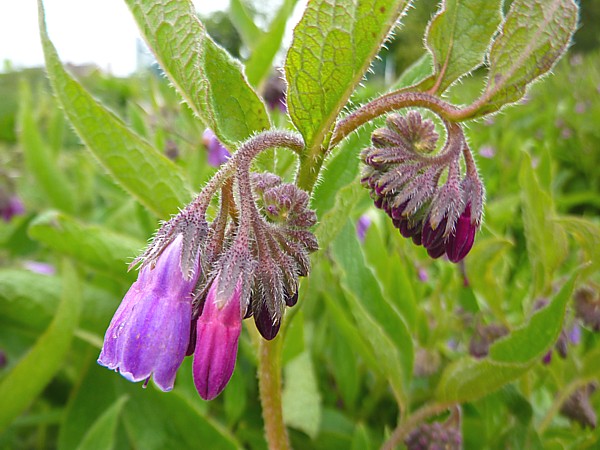 We turned off the trail after just a quarter of a mile and threaded through Rosedale Close, Lavender Way and Freesia Avenue to the green space leading into Walton Hall Park. There were Wood Pigeons on the grass and a Robin by the allotments. At the north end of the fishing lake some adult Canada Geese were sheltering a large huddle of goslings against the cold wind. 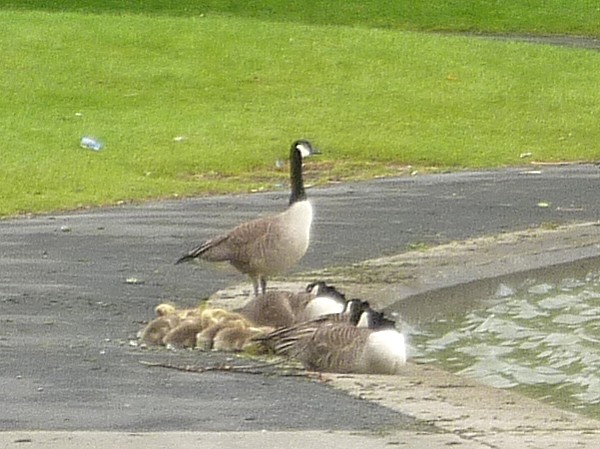 On the grass nearby was the stripped skeleton of a large bird, probably a Canada Goose. Something had killed and eaten it, right down to the bone, but hadn’t carried it off to a den or lair. A  fox might have taken its kill away, unless it was too big, so was the killer a domestic dog? The carcase wasn’t rotten or smelly, so the bird had probably been killed the night before. As we walked away, an otherwise well-behaved pet dog came by and sniffed at it, then started to roll in ecstasy, covering itself in the smell of the corpse. 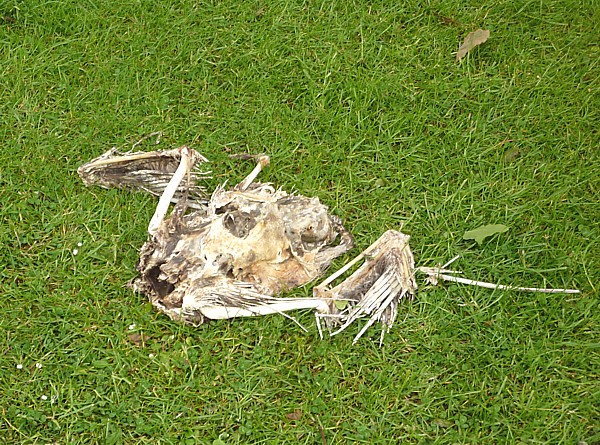 Despite the cold, gusty breeze Swallows were swooping low over the water. We thought it must have been very hard for them to catch anything in that wind, but perhaps they were catching newly-emerged insects near the surface of the water. There were several families of young Coots about, and also a Pied Wagtail. On the larger lake, still called the Boating Lake on modern maps, we were intrigued by three geese keeping company with each other. One was a Canada Goose, another was a Greylag, but the middle one looked like a hybrid of the two, with grey and white “Canada” markings on its head. Was this an “odd couple” family? 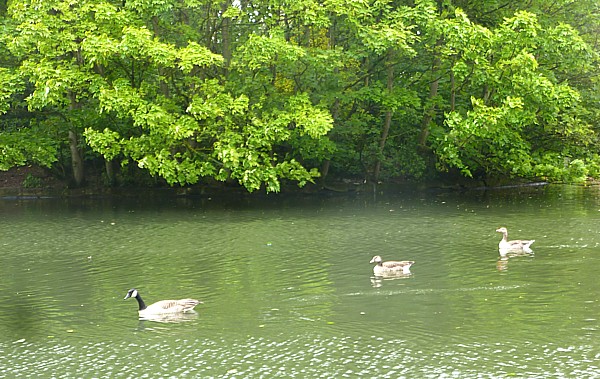 A Chaffinch was calling, and a single Moorhen swam off nervously. A Mallard mother had six ducklings. We looked for the Great Crested Grebes without success. There was definitely one on guard a week or two ago, and we could see where the nest had been, but there was no sign of any adults or baby Grebes. The sun came out at lunchtime, thankfully, and as we made our way back out of the park, the chilly huddle of Canada goslings had unpacked, revealing a crèche of 24 youngsters, with four adults guarding them. 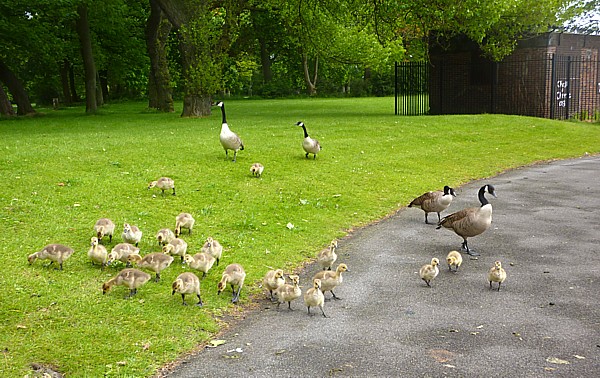 A lovely pink Hawthorn was coming out. The flowers are always “double”, so does that mean that  pink Hawthorn trees are hybrids of single-flowered native white and ornamental red? 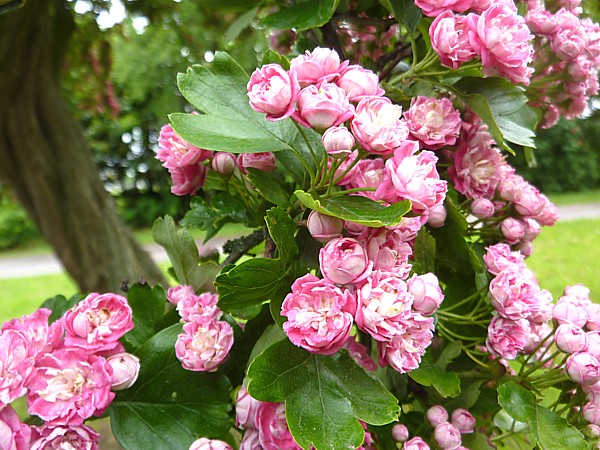 Another flowering tree was a Red Horse Chestnut. Mitchell describes the tree as “a fertile true-breeding hybrid” between Aesculus hippocastanum (the European Horse Chestnut) and Aesculus pavia (the American Red Buckeye). “All too commonly planted in parks, gardens, avenues and streets and as a commemorative tree. An inherently dull, dark tree of poor crown, foliage and flowers, and fruit of no interest. It grows slowly and suffers from a canker disease so is, fortunately, not long-lived.” Despite Mitchell’s distaste, the tree we saw looked in fine fettle. I wonder if it was the variant “Briotti”, said to be “a definite improvement on the type and of better health”. The flowers are described as brighter red, with ruby-red peduncle (stalk) and a white style. I think that’s the one we saw. 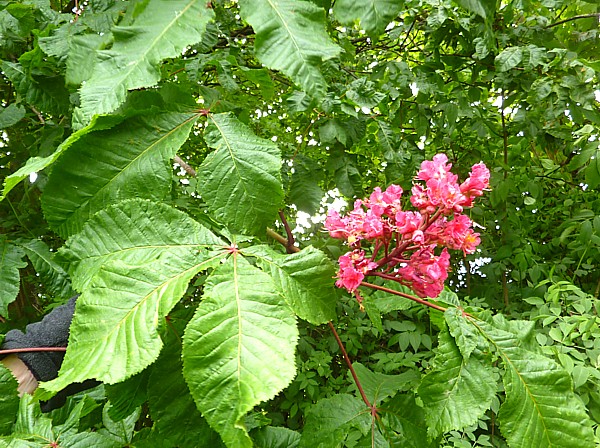 Rather than returning by the same route to the Trans-Pennine Trail we walked in the sunshine along the eastern edge of the park, listening to the House Sparrows chirruping in the hedge. We passed the funfair and rejoined the trail at the dip at Blackthorne Road / Walton Hall Avenue. 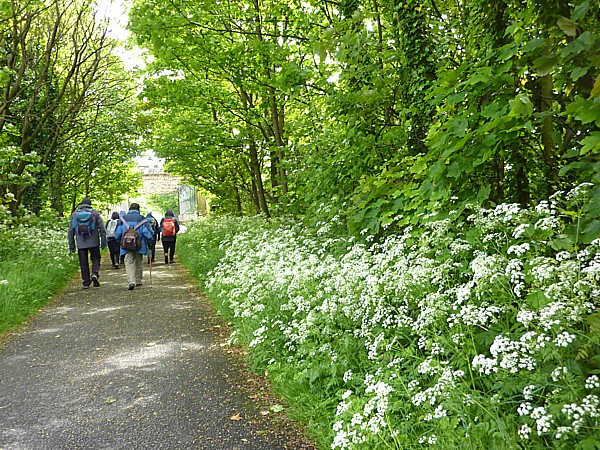 The path was lined with huge masses of Cow Parsley, and we also noted the Japanese Rose, Rosa rugosa, which might be invasive on the dunes, but provides a splash of colour in the hedges along the trail. 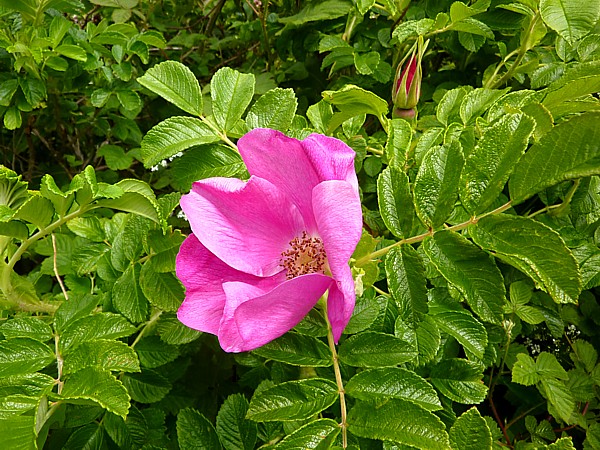 On this eighth section of the Trans-Pennine Trail we walked a further 1½  miles of it, taking us to 18½ miles from Southport.