Richard Surman, Ron Crossley, DaveB and I headed over to Coed Llangwyfan, a broad-leaved and coniferous woodland below the Iron Age hillfort on Pen-y-Cloddiau in the Clwydian Range AONB.

A cool start as we parked up with Willow Warbler, Chiffchaff, Blackcap, Wren, Blackbird and Chaffinch in song and a Raven croaking further along the valley. A few common plants with Gorse Ulex europaeus, Wood Forget-me-not Myosotis sylvatica, Red Campion Silene dioica and Daisy Bellis perennis. The trail took us up through a stand of Scot’s Pine noting Blue and Long-tailed Tits and our first Redstart of the day calling from one of the smaller deciduous trees towards the rear of the Pines.

A brief Geology interlude raking through the mound of Ordovician Siltstone weathered from an exposed outcrop. Some interesting egg-shaped and spheroidal iron-rich areas had formed within the beds. Unfortunately no fossil Graptolites though. 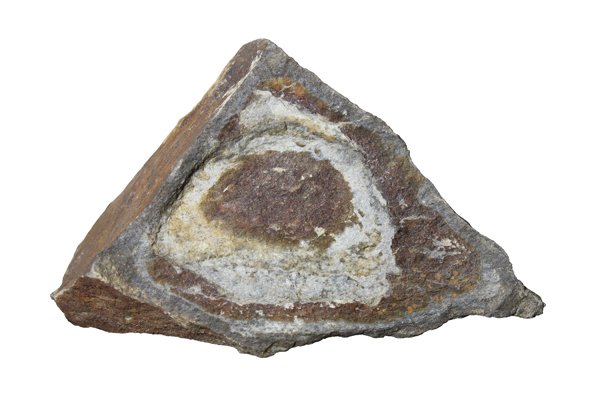 A Siskin perched briefly on one of the Pines, A Whitethroat sung from a scrubby Gorse bush and a male Bullfinch flew ahead of us as an escort out of his patch. Pheasant, Robin and Linnets were added to the list along with Germander Speedwell Veronica chamaedrys and Cuckooflower Cardamine pratensis. 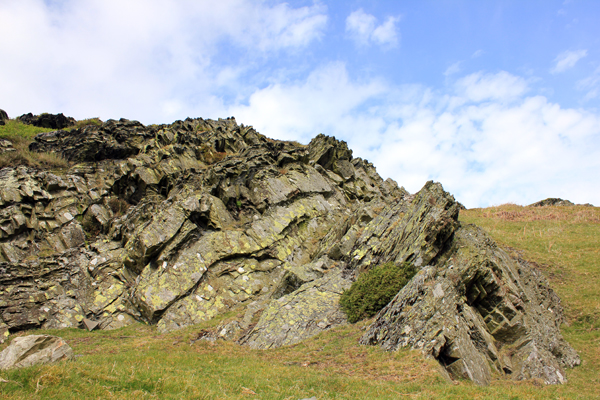 We headed out on the moorland passing outcrops of crumpled Silurian sediments. We found a number of delicate flowers of Wood-sorrel Oxalis acetosella looking rather incongruous amongst the Bilberry Vaccinium myrtillus, Tormentil Potentilla erecta and mosses. It is considered an ancient woodland indicator – a possible clue to the area’s ancient habitat. A few murky bog pools had Floating Sweet-grass Glyceria fluitans with one home to a few Pond Skaters Gerris sp. 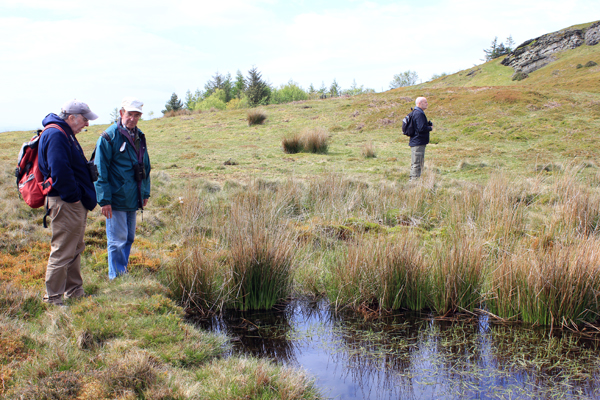 A Cuckoo shot across looking rather raptor-like being chased by half a dozen Meadow Pipits. Mepits were in great numbers over the moor along with Skylark, a few Wheatears, Mistle Thrush and Yellowhammer. Our ‘Corpse Of The Day’ was the remains of a lamb – skull missing. With spots of rain in the air we crossed the earthen mound defences of Pen-y-Cloddiau (Welsh for “hill of the trenches”). This is the second largest hillfort in Wales and the ramparts enclose an area more than a half-mile long.

We continued along to the Bronze Age burial mound at the north end of the fort that was restored in 2010 where half a dozen Swifts were circling overhead and a Hoverfly later identified as Sericomyia lappona was resting on a stone. The larvae of which are of the ‘long-tailed’, aquatic type and are associated with peaty pools and boggy stream-sides in moorland. 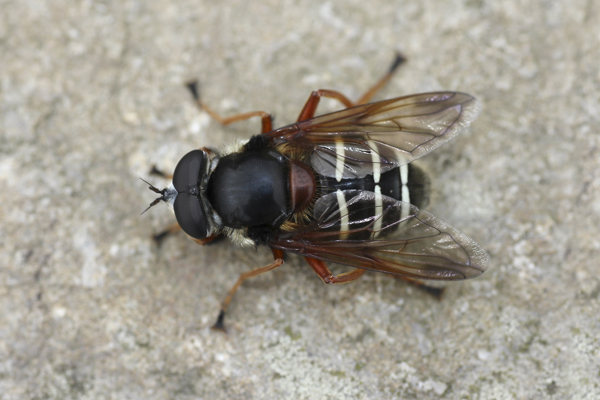 We began our descent noting a couple of Carrion Crows chasing a Buzzard close to a ramshackle farm with rusting vehicles piled outside the outbuildings. St. Mark’s Flies Bibio marci were on the wing legs dangling beneath them and a Garden Tiger Arctia caja caterpillar was spotted beside the path. A group of kids on their D of E sped past us carrying large rucksacks.

We stopped for lunch beneath a large Ash tree that was just coming into leaf. An idyllic spot with a Raven flying by, Swallows circling overhead, another Redstart giving brief snatches of song, Song Thrush belting out its repetitive notes, a Yellowhammer asking for its lunch of bread and no cheese and tinkling Linnets.

I spotted a pair of mating Soldier Beetles that were quite distinctive being all black, except for the edges of the neck shield which are red or orange. There are two identical species around fitting this description, which can only be told apart by examining their genitals: Cantharis obscura and Cantharis paradoxa. 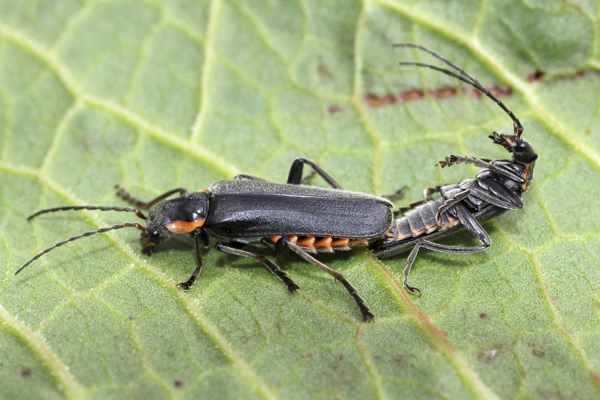 With the sun now peeking through the clouds we continued along the track which gave wide views across the Vale of Clwyd. A Small Heath Coenonympha pamphilus flitted by, a Cuckoo called, another couple of Redstart sang but remained hidden, a pair of Stonechat perched obligingly on fence posts and thoughts of India flooded back as a Peacock called. 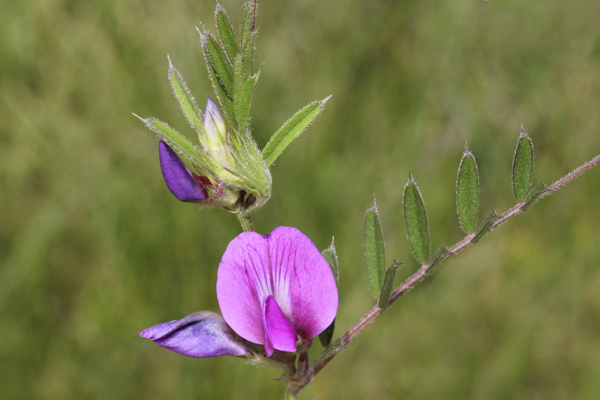 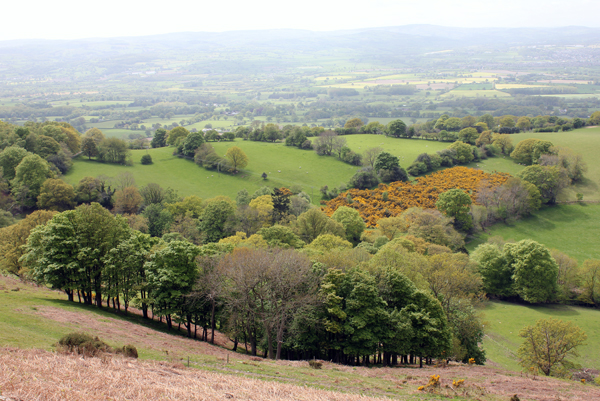 A few Jackdaw joined a clamour of Rooks sporting this Spring’s latest look of black feather trousers. At a small deciduous copse Richard had a brief glimpse of a Redstart, a Great-spotted Woodpecker briefly drummed; Wren, Willow Warbler and Great Tit were in song. I continued and had a couple of Ravens overhead, a hovering Kestrel and two Red-legged Partridge which shot up from an adjacent field and flew off low to the ground.

We stopped at the base of the hill admiring three flitting Orange Tips Anthocharis cardamines before the final climb back to the car park. A Damselfly flitted overhead and landed – despite quickly changing to macro lens it flew off again high into the trees. Absolutely gutted! it was a teneral male Beautiful Demoiselle Calopteryx virgo a stunning sight. A Small Tortoiseshell Aglais urticae was sunning itself on the path and a day-flying Moth hunkered down in the grass. All too soon we were heading back to civilisation.