It was a calm, overcast, foggy day, and the thermometer at North Park said 5°C, nominally colder than last week’s 6°C, but without the wind it felt much milder.

We walked through St John’s Precinct and spotted a bird flying into a shoe shop, then perching on one of its roof struts. It was a Pied Wagtail. The staff flapped it away and the bird went for the doors into Great Charlotte Street, but it chose a closed one, and battered itself hopelessly against the glass. Some passers-by kept the automatic doors open, and John tried to catch hold of the fluttering bird, but it evaded him and, happily, made it out of the open doors to freedom.

I took no pictures of Woolton Woods today; my camera battery had run out and I hadn’t noticed. Birds spotted included Blackbird, Jay, Magpies, Wood Pigeons and Chaffinches. Inside the Walled Garden Snowdrops were in bloom and the Magnolia buds were fat and thinking of bursting soon. A Quince bush was flowering, with its dark crimson flowers against the bare twigs. A big multi-trunked Holly tree bore its leaves too high up to be spiked, but some suckers or saplings around the base had the classic Holly leaf.

There was a Sparrowhawk kill site on the lawn. We noted a head and a beak, a few wing feathers and lots of down feathers. The prey was probably a Wood Pigeon, so the predator must have been the larger, female Sparrowhawk.

We were at Woolton Woods for a ceremony there at 12.30, to unveil a plaque to Col. Sir James P Reynolds, who gave Woolton Woods to the people of Liverpool. It was organised by the Save Woolton Woods campaign.  The Council is proposing to build a new St Julie’s school on part of Woolton Woods, then use the old St Julie’s site for housing. Local residents are very opposed. Simon O’Brien (actor, formerly of Brookside and a Woolton resident), introduced local historian Irene Byrne, who talked about Sir James and the terms of his gift, which she said ought not to be broken, then he introduced members of the Reynolds family, who spoke against the scheme, then the Lord Mayor of Liverpool, Councillor Erica Kemp, and Lady Charlotte Reynolds, who joined in unveiling the plaque. 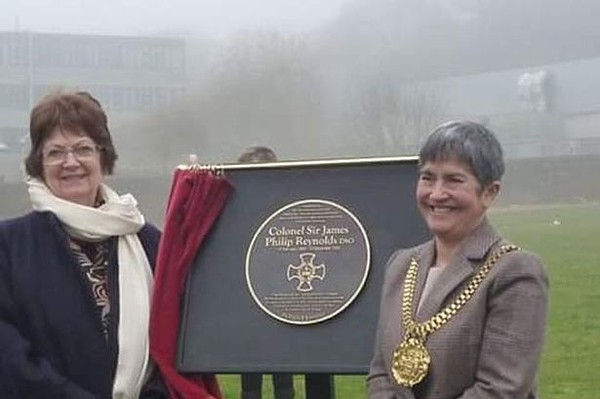