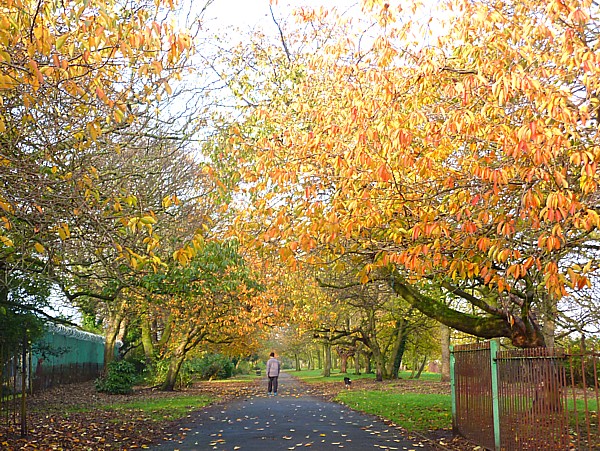 We were greeted by a squawking Magpie at the park gates, and then had a look at the Shankly Gates on Anfield football ground and the Hillsborough Memorial, busy with tourists or mourners taking photographs. In the park, there was little colour apart from the autumn leaves of the Cherry trees. A few Ragwort were still in flower, one or two Daisies and a Buttercup. Of the shrubs, Fuchsias and Hydrangeas were flowering, as was Skimmia japonica with its dark red flowers and evergreen leaves showing well against Spotted Laurel. There was a bright splash of Snowberries in one corner, and by the Isla Gladstone conservatory someone has espaliered Cotoneaster onto the wall, making a brave show of red and orange berries. 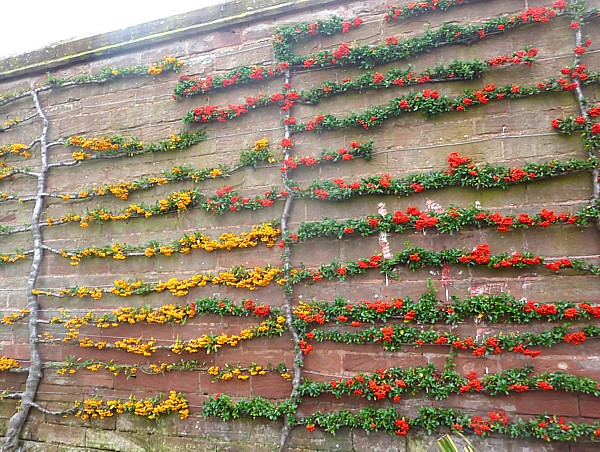 Shrubbery birds were scarce, yielding only Blackbird, Blue Tit and Chaffinch at first, although we later saw some Robins and a Mistle Thrush. On the grass was a young Herring Gull, some Black-headed Gulls and a couple of Common Gulls. Crows mooched around and there were several bold Grey Squirrels under the trees. We met MNA member Chris F near the Isla Gladstone Conservatory and admired the Himalayan Birch and a young Pin Oak. We lunched outside the conservatory, with weak sun trying to come out. Around the lawns were three young Crab Apple trees heavy with bright red fruit. 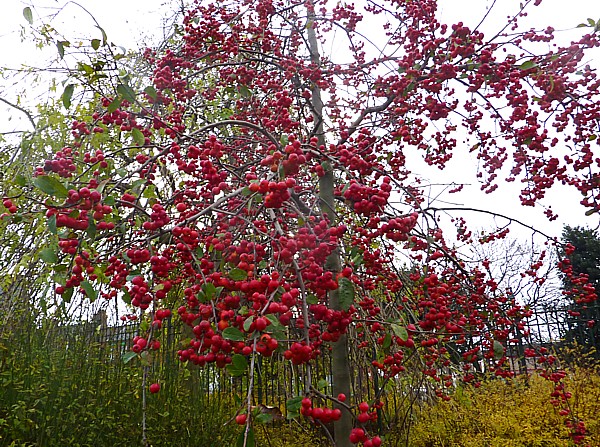 Chris F showed us a fungus in the mulch around some young trees on the lawns. It is an alien, he says, although it’s been found here for a while. Is it coming in with the mulch? It’s Stropharia aurantiaca also known as Leratiomyces ceres and commonly known as the Redlead Roundhead. 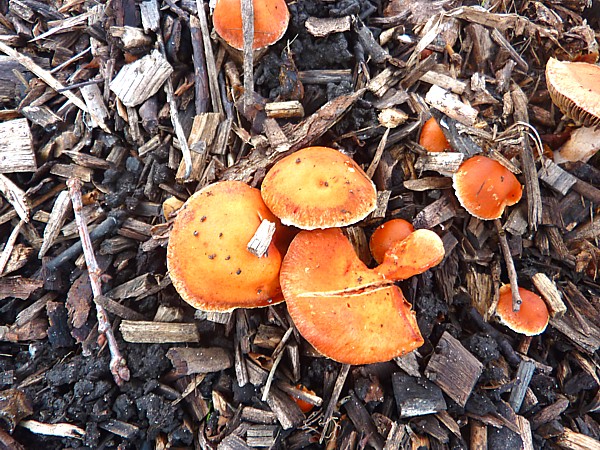 On previous visits we had noted a circle of old London Plane trees, but hadn’t been able to identify the flat-topped tree in the middle. Now we think the central one is a Wych Elm, rather appropriate for a pretend pagan grove! (Added later – since it has a weeping, flat-topped habit, I think it might actually be a Camperdown Elm. Mitchell says “A broad head of spreading tortuous branches grafted onto a straight bole of Ulmus glabra Wych Elm and weeping to the ground in a bower all around it.”  That sounds right – I must go for another look!) 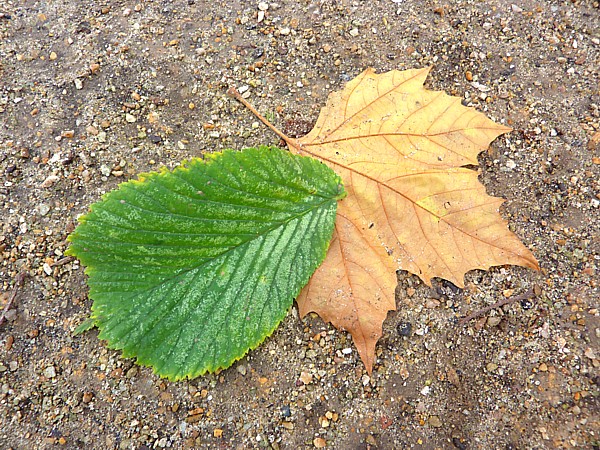 On the lake were Canada Geese, Mallards, a couple of Moorhens and a Coot, all coming to Warburton’s Toastie from a Dad and a toddler. There was no sign of the male Mandarin duck, who may have moved on. Later one lonely Mute Swan cygnet joined the scrum, perhaps driven off by its parents already. 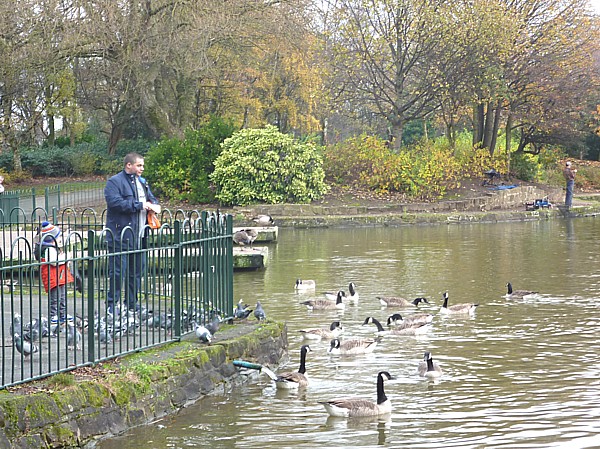 We spotted another bright young oak, again probably a Pin Oak, Quercus palustris, because the leaves are the wrong shape for a Red Oak. 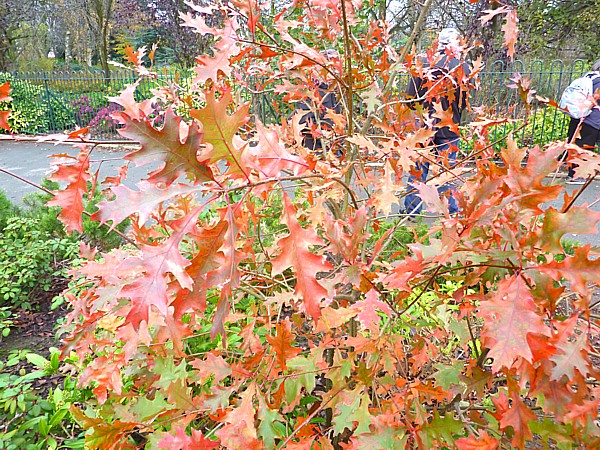 An old Cherry tree had Gannoderma fungus breaking out all around the base, so it hasn’t got much longer to live. 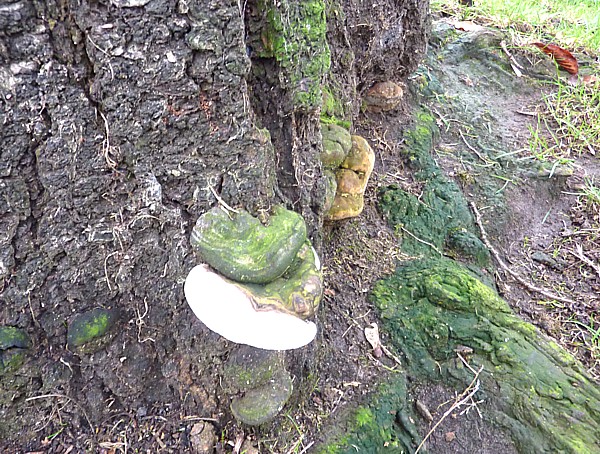 We crossed over into Anfield cemetery, spotting more Harlequin ladybirds looking for crevices on wood-effect gravestones. On damp mossy grass there were three colours of Waxcaps – white, bright yellow and golden brown. Wikipedia says “In Europe Waxcaps are characteristic of old, unimproved grasslands (termed waxcap grasslands) which are a declining habitat, making many Hygrocybe species of conservation concern. Elsewhere they are more typically found in woodlands. Most are ground-dwelling and all are believed to be moss associates. Around 150 species are recognized worldwide.” 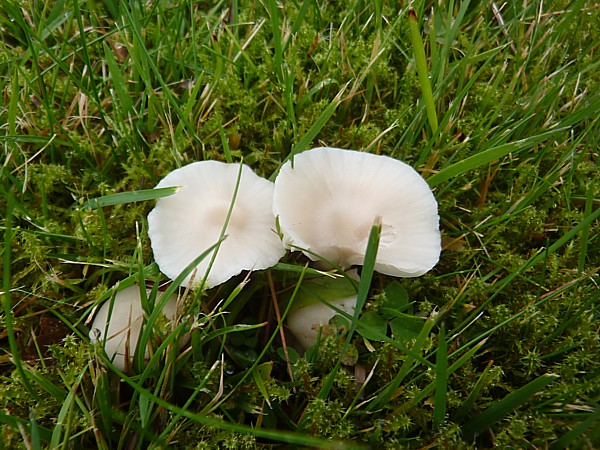 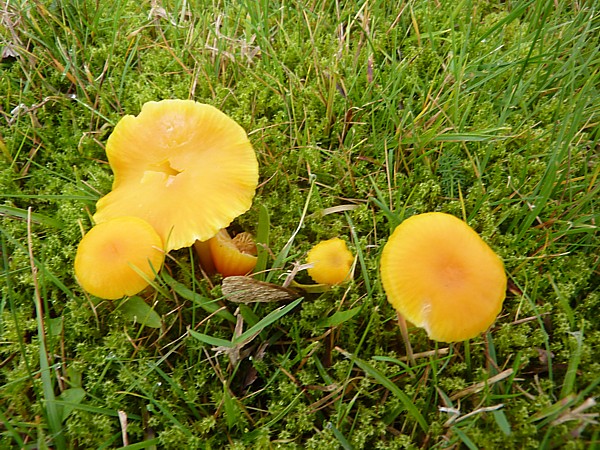 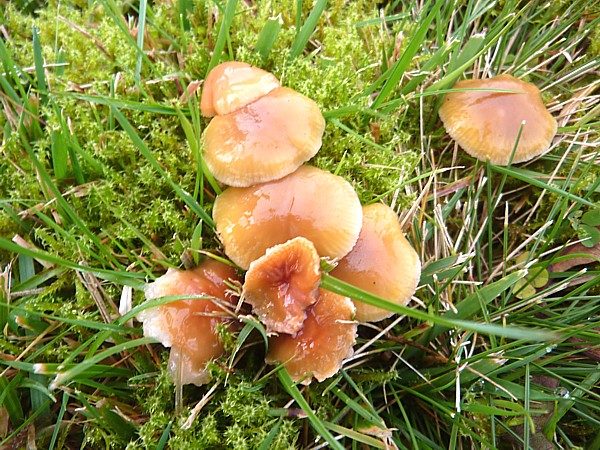 High above about a dozen Pink-footed geese flew over and a Jay flew through the trees. We stopped to look at the gravestone of Norman Alexander Milne, which refers to “dear Mike”. He was the 1950s singer Michael Holliday, who is thought to have committed suicide when he was threatened with “outing” as gay by a Sunday newspaper. We also looked without success for the gravestone of William Herbert Wallace, “The Man from the Pru”, who was once thought to have murdered his wife in a famously mysterious case.