After circumnavigating the Staffordshire Market Town of Leek on a road diversion we eventually arrived at the RSPB Reserve at Coombes Valley. Coombes Valley was formed at the end of the last ice age, some 10,000yrs ago. A massive ice sheet covered the Cheshire Plain and as it retreated the trapped melt-water formed a huge lake which found an escape, carving the impressive V-shaped valley.

Coombes Valley is predominantly ancient broadleaved woodland dominated by Oak (Quercus sp.) with Birch (Betula sp.), Rowan Sorbus aucuparia, Holly Ilex aquifolium, Ash Fraxinus excelsior and Hazel Corylus avellana. Although much of the woodland was felled in the 1920s and 30s and charcoal production, used in the production of iron, occurred until the 1950s small areas of this ancient woodland remain. Currently the woodland areas are managed to provide a network of open rides and glades for the benefit of breeding Warblers and a UK Biodiversity Action Plan Priority species – the Argent & Sable Moth Rheumaptera hastata. Argent and sable are heraldic terms that mean ‘white and black.’ Two different races occur associated with different habitats. The smaller race nigrescens is a moorland species whose caterpillars feed on bog myrtle whereas for the slightly larger and darker race hastata which occurs in Coombes Valley sapling Birch (Betula spp.) up to a metre tall that are in full sun for most of the day appears to be essential.

The sunny conditions had brought out the Insects and Spiders – so the macro lens was quickly attached to the camera. A Nursery Web Spider Pisaura mirabilis was characteristically sun basking on vegetation with the first two pairs of legs together, stretched out at an angle – giving the impression on first glance that it only had six-legs. They usually stay motionless in this position until a fly or insect passes by, quickly sprinting to capture it. After mating the female produces a very large egg sac which she carries around in her fangs! When the time for the Spiderlings to hatch approaches, the female deposits the egg sac on a leaf and spins a protective silk ‘nursery web’ tent around.  She can often be seen standing guard on the tent until the Spiderlings eventually disperse. 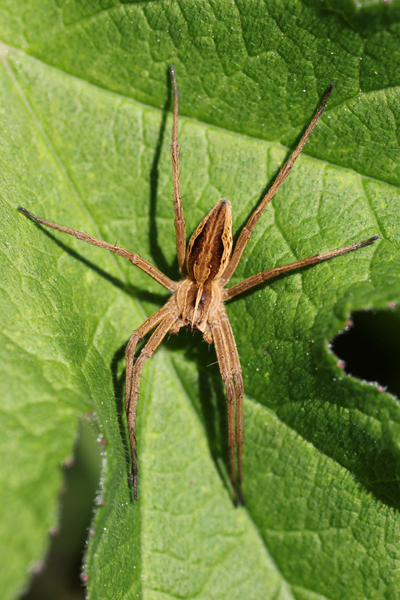 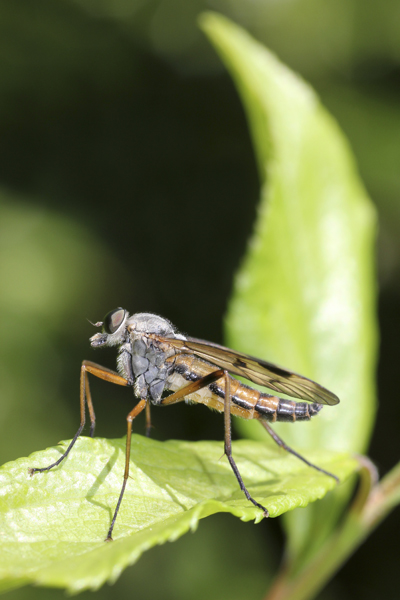 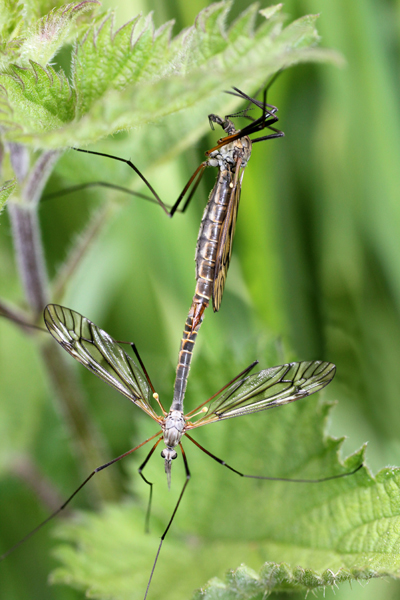 The leaves of Broad-leaved Dock Rumex obtusifolius had a number of Green Dock Beetles Gastrophysa viridula and the leaf undersides held groups of the oval yellow eggs.

The most numerous Hoverfly was Rhingia campestris – this distinctive species with a long snout, orange abdomen with a black line along the axis and along the lateral margins of the tergites was happily feeding on the masses of flowering Bugle Ajuga reptans and Lady’s Smock Cardamine pratensis. Other Hoverflies noted included Heliophilus pendulus and Eristalis abusivus. 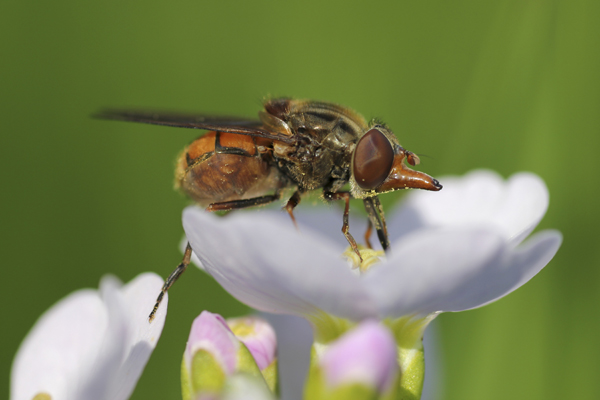 A couple of members had found a Leaf Beetle Chrysomelidae that I later identified as a Brown Willow Beetle Chrysolina staphylaea whose food plant is noted as Creeping Buttercup Ranunculus repens. Another interesting find was a male Slender Groundhopper Tetrix subulata –this small Grasshopper-like insect has wide ‘shoulders’ and a narrow tapering abdomen hidden beneath an extended pronotum. 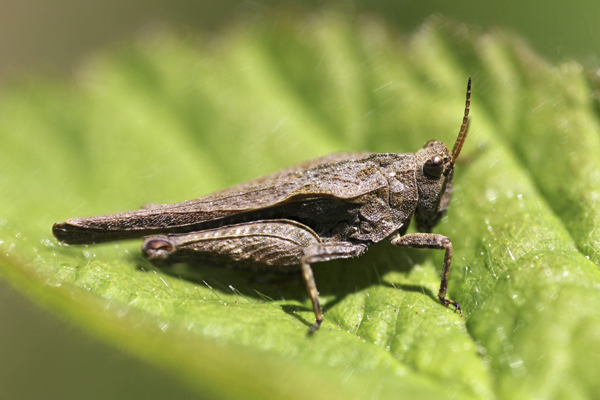 Most members had good views of one of the reserve’s specialities Pied Flycatcher with both male and female active around their nest-box close to the trail. A tree close held impressive tiers of the Fungi Dryad’s Saddle Polyporus squamosus. The Redstarts were slightly more skulking than the Pied Flys; although a number of males could be heard singing only a few members had brief glimpses. Willow Warblers, Chiffchaff and Blackcap were also in song. The woodland appeared ideal habitat for Wood Warbler – the young volunteer warden mentioned that they are in surrounding woodland but he hadn’t heard any singing in the reserve itself. A Nuthatch was seen entering its nest-hole and John Clegg observed a Great Spotted Woodpecker attempting to peck into one of the nest boxes. 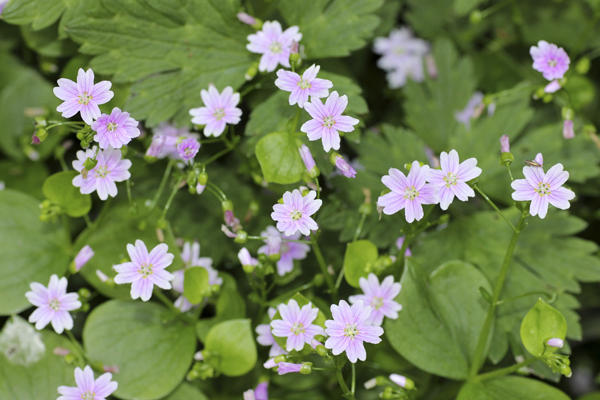 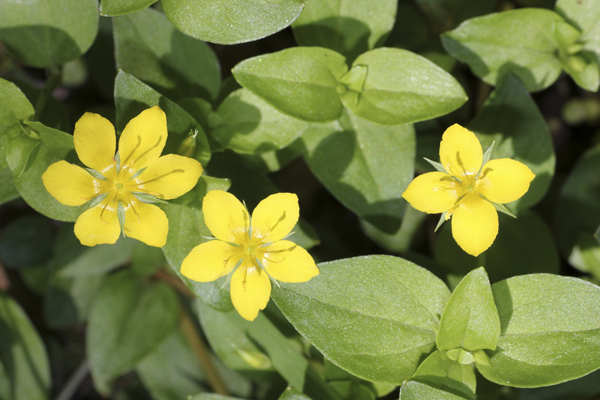 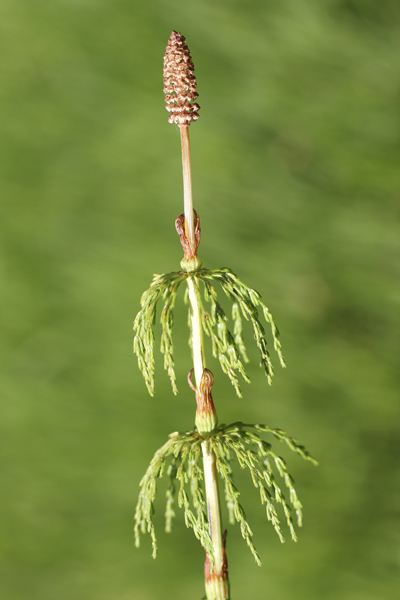 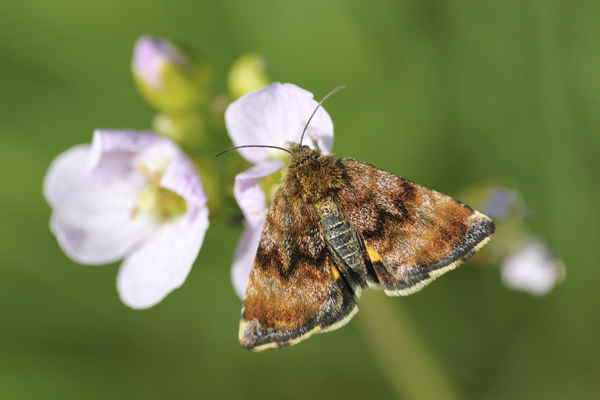 Love was in the air for a couple of Soldier Beetles Cantharis pellucida –they can more usually be seen feeding on both nectar and pollen from Hawthorn Crataegus monogyna and umbellifers. 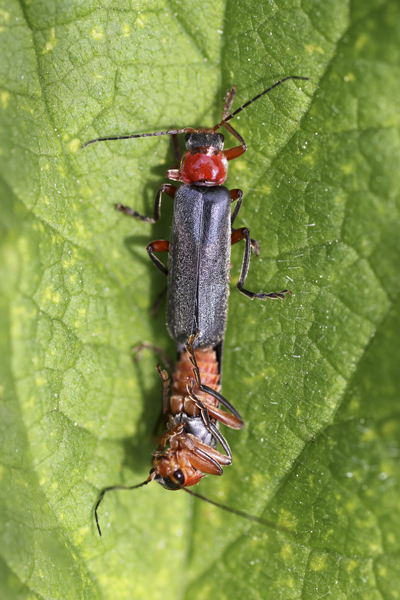 Back at the reception we caught up with other member’s sightings – Lynn and friend struck lucky with the Argent and Sable Moth on one of the woodland rides, they also noted Green Hairstreak Callophrys rubi and a stunning Two-banded Longhorn Beetle Rhagium bifasciatum.

As a finale there was not one but two Corpse Of The Day! A European Badger Meles meles skull – the jaw is normally permanently attached to the skull due to the “wrap-around” articulation and the presence of a sagittal crest that tends to overhang the back of the skull as it gets older. 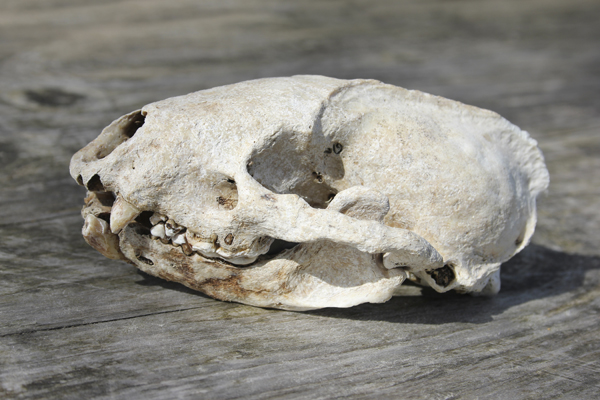 A Red Fox Vulpes vulpes skull – similar to a Dog but with flat or concave surfaces to the post-orbital processes. 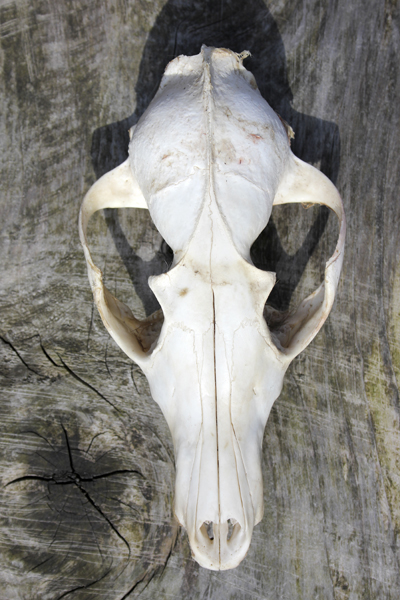