We met at the Pump House at Albert Dock on a cool, cloudy morning. 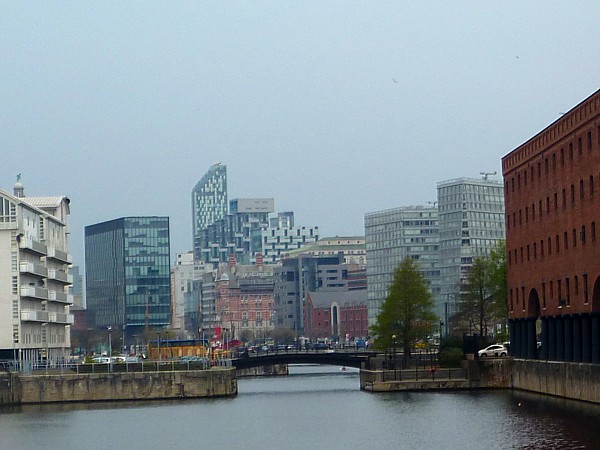 We were joined by MNA member Chris F, who took us to see some Rue-leaved Saxifrage on the edge of Canning Graving Dock, where the ship De Wadden is berthed. It’s opposite the GWR warehouse, and near the back of the Museum of Liverpool. The plant flowers in April and May and is said to prefer limestone pavement or any similar rocky surface. 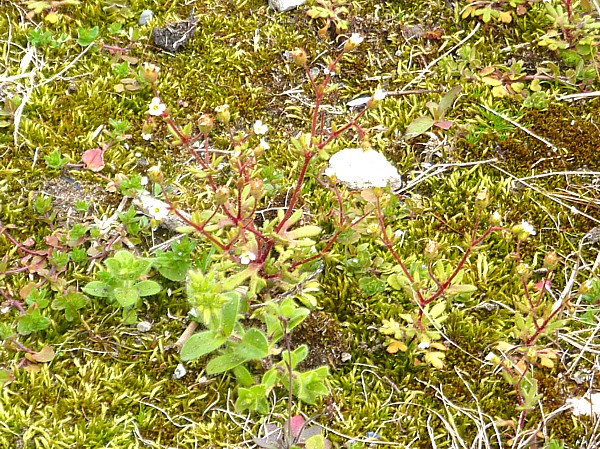 Amongst the dock buildings we saw a Blackbird, one Canada Goose and several Herring Gulls. There is a fossil shop in Albert Dock called Nature’s Treasures, selling Trilobites, Ammonites and so on. This group of Orthoceras was going for £35. 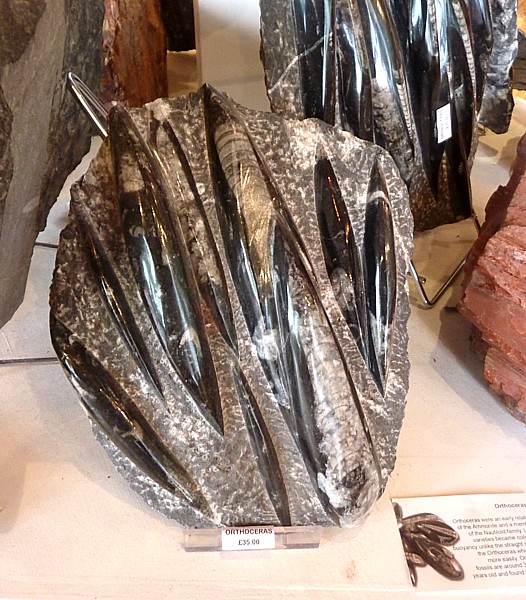 We went around to the new little park between Hotel Formule 1 and the back of the John Lewis car park. It commemorates the old church of St Thomas, built 1750 and closed 1905. It’s the place where Joseph Williamson of the Tunnels was buried but the actual spot is now lost. 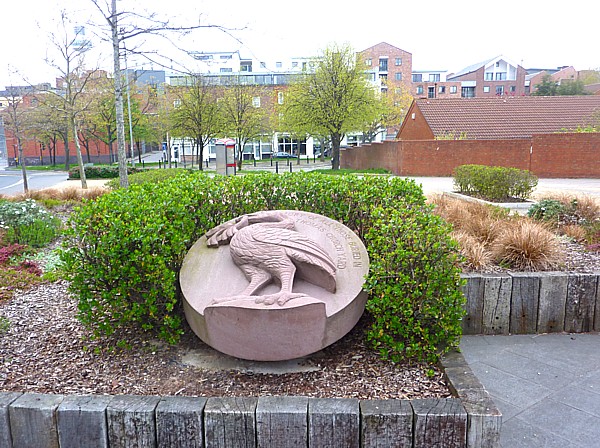 Outside the YHA, Garlic Mustard  and White Dead-nettles were flowering, and we saw a Blue Tit, a Robin, and a Blackbird carrying worms. A solitary Lesser Black-backed Gull was having a bath in the King’s Dock.  The tide was nearly full so there was just a bit of muddy shore left by the Customs and Excise building, showing a few gulls, a Cormorant and some distant Oystercatchers. We stopped by the Liverpool Watersports Centre to watch someone practising their Wakeboarding. 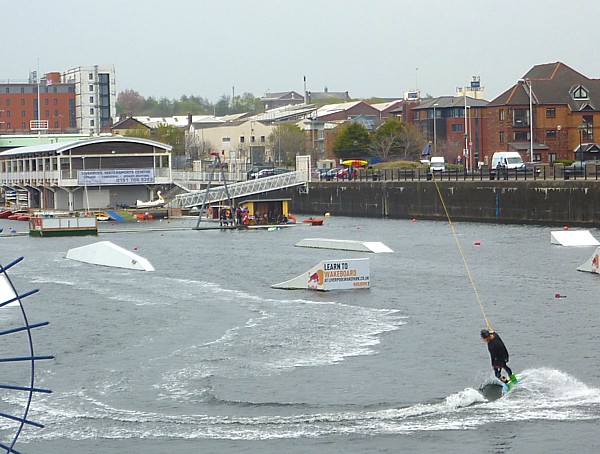 By the yacht moorings where we had our lunch it was still grey, chilly and overcast. There were Goldfinches in a tree and some House Sparrows chirping in the shrubbery. Chris F pointed out the abundant clumps of Danish Scurvy-grass. 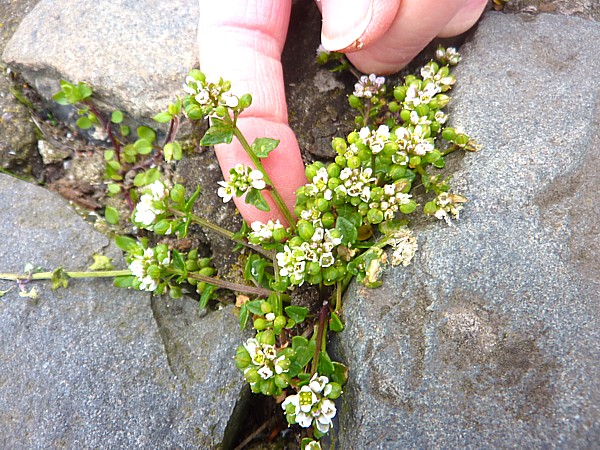 Further south about 20 fishermen were having a competition. One of them told me they caught Whiting, Codling, Plaice, Dabs and sometimes Rays. He showed me two Whiting he had just caught. Another fisherman had his bait laid out on a newspaper – Lugworms and chopped squid. 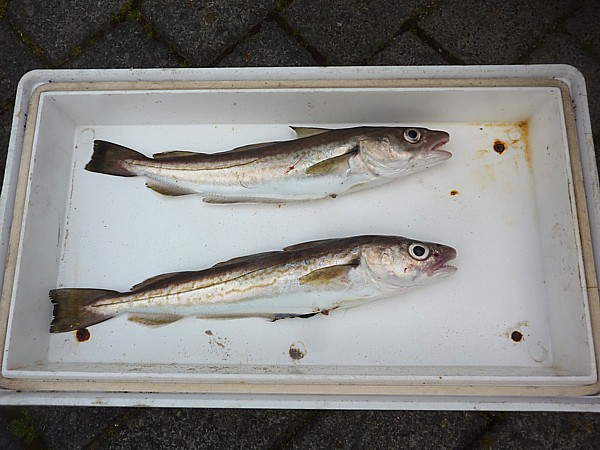 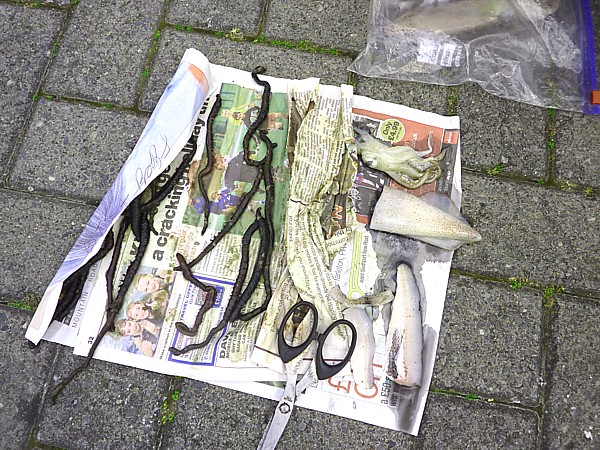 Under a bollard were several tufts of Thale Cress, and on the edge of the dock was a cushion of Spring Beauty, with its stem leaves fused to look like a round leaf surrounding the flowers. 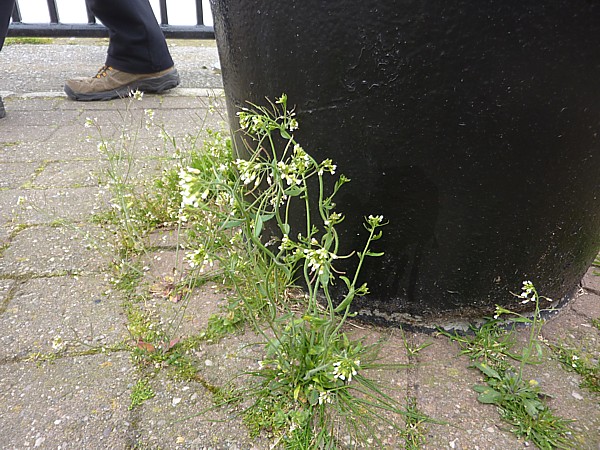 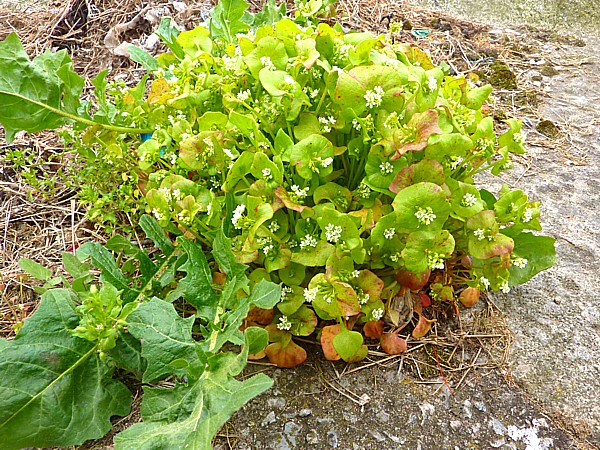 There was a bright display of Dandelions near the Chung Ku restaurant, and some Green Alkanet flowering. 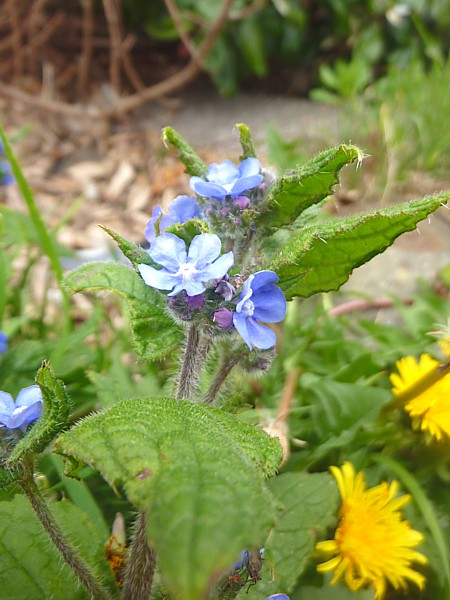 Near the turn for the Britannia pub, nine Turnstones flew in and perched on the dock edge. They were soon joined by a larger group, all chirping and calling. We counted 32 altogether, and they were very confiding, sitting contentedly on the edge of the dock within a few feet of us. 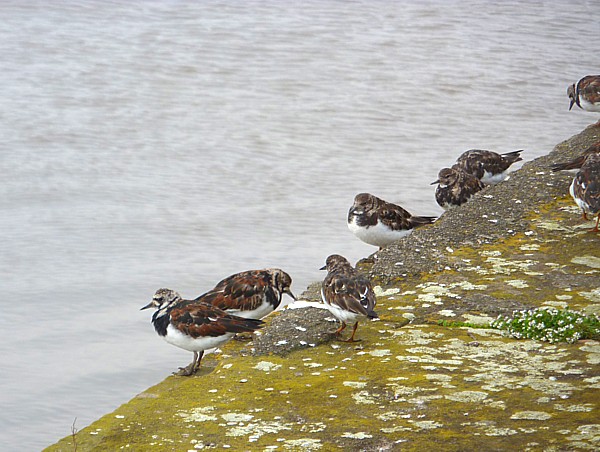 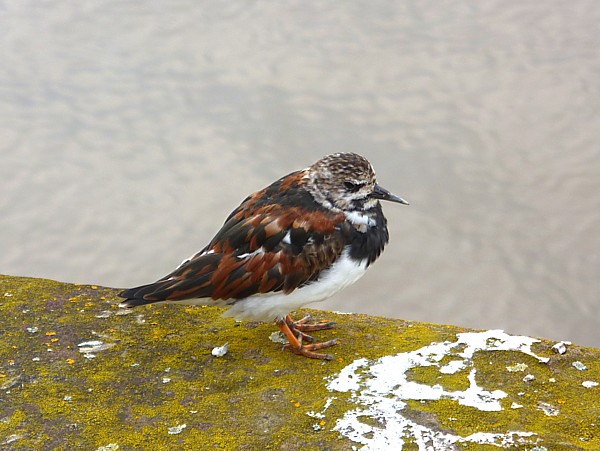 South of the pub, on the greener part of the prom, we heard a Song Thrush calling from the shrubbery. Magpies were foraging about and a fresh-looking Small Tortoiseshell flitted by. The first Field Buttercups were in flower. 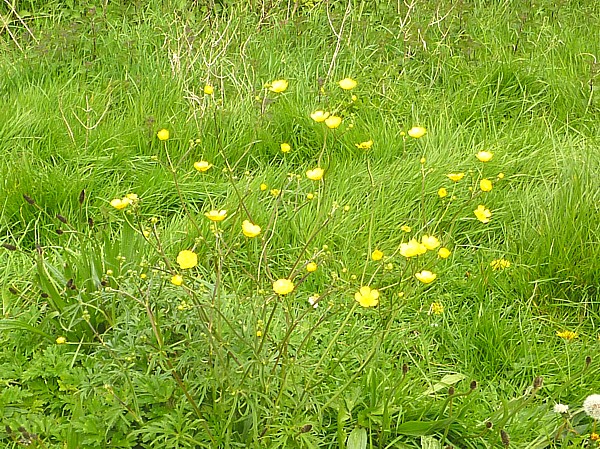 We turned into the Festival Gardens, which is managed to be a blend between a formal park and a wildlife area. An Orange Tip butterfly flew by, and at the pond we saw Coot, Mallard, Moorhen, Great Tit and Wood Pigeon. Chris F picked a fluffy head of Reed Mace and took it apart until he found the tiny Reed Mace Bug inside. A Robin was feeding its mate and we heard both a Chaffinch and another Song Thrush. Swallows flew over the water and the Marsh Marigolds bloomed magnificently. 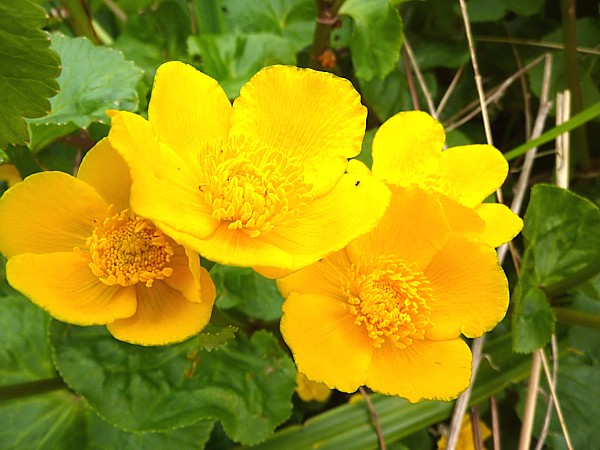 On the main lake there were two Mute Swans. We could see one was wearing a coloured ring on its tucked-up leg, but would it put it down so we could see the code?  We lured it to and fro with bits of Hot Cross Bun from Olive’s lunchbox, and eventually it unshipped its leg and we saw a green Darvik ring, code CFH8. It’s been reported. (Added 22nd April. Cheshire Swan Study say CFH8 is a female of unknown age, ringed at Spike Island in Widnes on 11th February this year. Ours was the first re-sighting.) 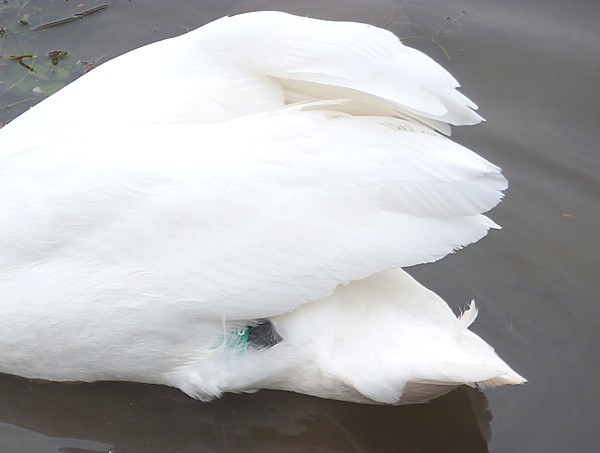 A final note: While I was waiting at the bus stop on my way this morning I saw a dead Grey Squirrel, the victim of a collision with a car, lying bloodied in the road near the junction of Liverpool Road and Endbutt Lane.

Public transport details: We started the walk in the City Centre without getting any buses. Returned to Liverpool on the 82A bus outside the Festival Gardens at 2.59. Some got the bus the other way from the bus stop opposite, while others walked up to St Michael’s Station.