The weather wasn’t pleasant today, it was windy, overcast, damp and misty, with occasional spits of rain. We took the bus up to St George’s Church, Everton and went inside. This beautiful church was the first ever to be built on a cast iron frame, making the interior gorgeously light and delicate. 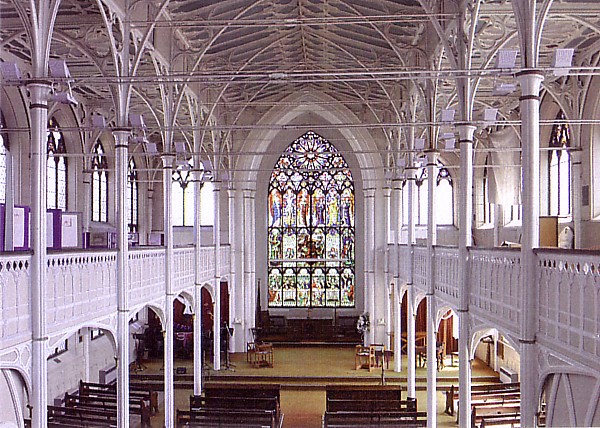 Then we strolled in Everton Park. On a clear day there are wonderful views, and it’s a walk really worth doing, but it was very murky and hazy today. There are several newly-erected signboards by the Friends of Everton Park on the theme “Walk into history across a spectacular ridge”. They point out the historical features of the area, like the old fire beacon, the Royalist encampment in the Civil War (from where Prince Rupert said Liverpool was “nought but a crow’s nest that a parcel of boys could take”), the Everton Toffee Shop and the old lock-up. 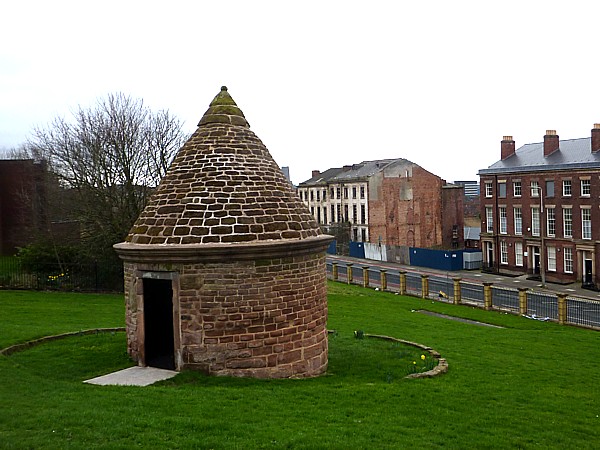 One signboard shows a panoramic view over the City, naming notable Liverpool and Wirral landmarks, the Welsh peaks beyond and the Great Orme. 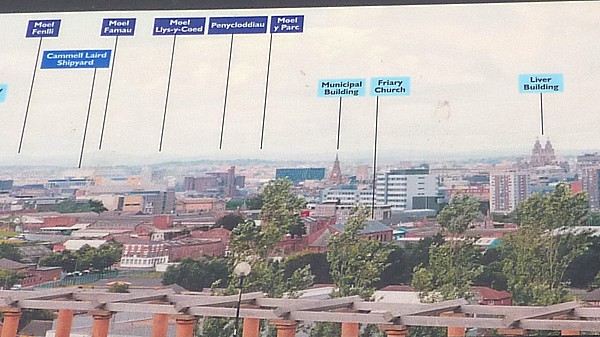 Carefully placed against the skyline is a sculpture of Everton worthies. On the left, Molly Bushell, of the Everton Toffee Shop; in the middle, Kitty Wilkinson, “the Saint of the Slums” who founded Liverpool’s first public washhouse and baths; on the right a docker, “selected for his role as a vital labourer at the heart of Liverpool’s industrial revolution”. 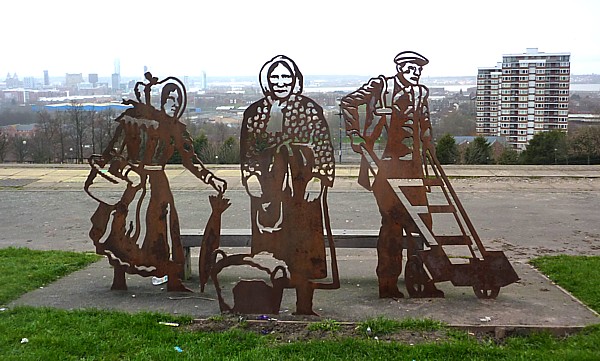 The wind was very strong, and some Herring Gulls were hovering in the updraft. The only other birds in evidence were Magpies on the grass. A few flowers were struggling through:  Shepherd’s Purse in rough corners, Daisies in the grass, closed-up Dandelions on a bank, and at the back of the colonnade there were the remains of a small wildflower meadow, with some straggly Corn Marigolds, Corn Daisies and Cornflowers still in bloom. Surprisingly, the tree trunks were rich with lichen, so all those fresh breezes must keep the air very clean ! 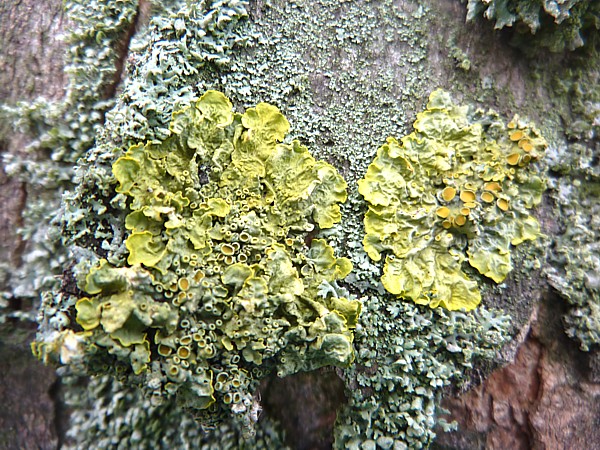 The sun tried to come out once, but otherwise it was a cold, raw day with a lazy wind (too lazy to go around you, just blows straight through you) and it was more like February. We were too cold and exposed to stay there so we took a short bus ride to Stanley Park and lunched outside the Isla Gladstone Conservatory. 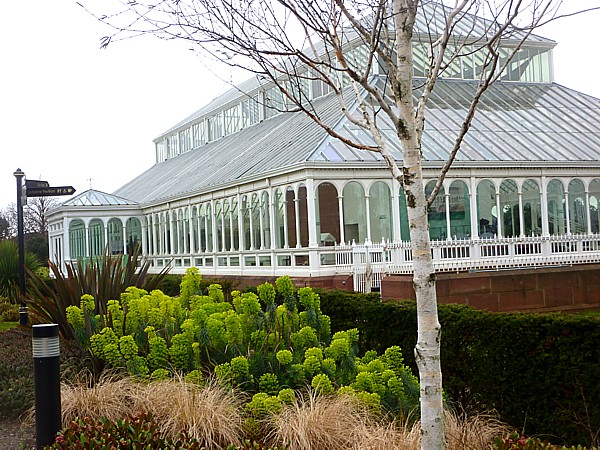 Canada Geese, Mallards, Coots, Moorhens and a pair of Great Crested Grebes were on the lake. We looked for the Mandarin drake, which was last seen six weeks ago, but he wasn’t showing. There weren’t any Pochards either, but we noted a single pair of Tufted Duck. Two Coots were mating on their nest. A male Sparrowhawk flew across the lake and made all the Canada Geese scatter. 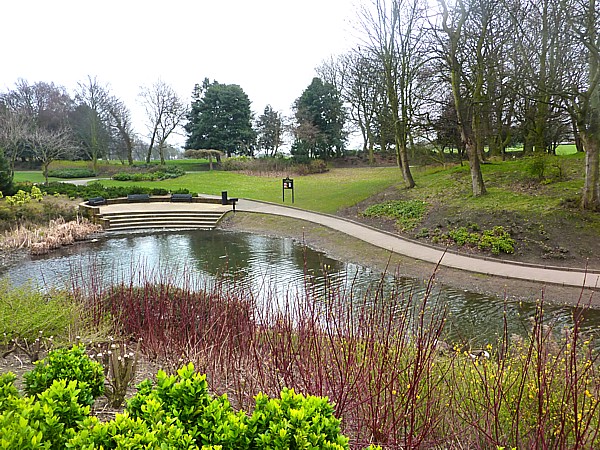 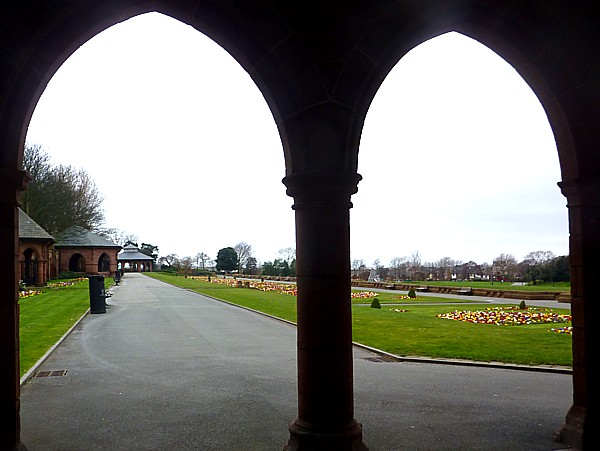 Blooming in the shrubbery against bare twigs were the flame-coloured cups of Quince. 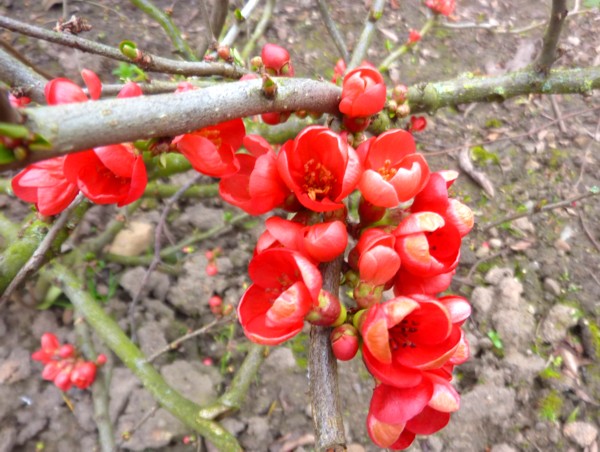 Another fine display of colour was Darwin’s barberry (Berberis darwinii), a native of Southern Chile and Argentina, named after the famous Charles (and not after his grandfather Erasmus, the 18th century botanist and polymath, as I first surmised.) 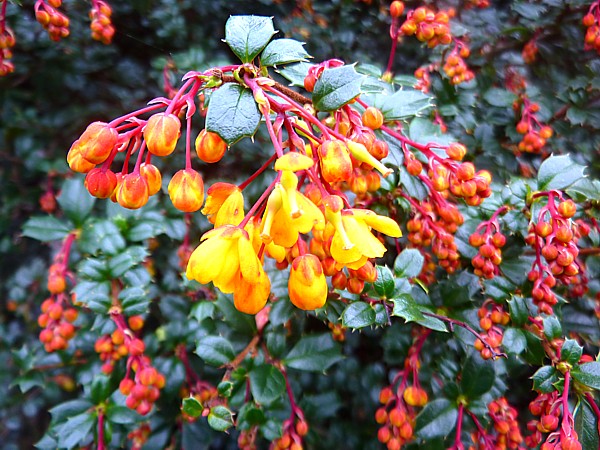 Surrounding a gravel circle at the north west corner of the park are eight venerable London Planes, with another unidentified tree in the centre. It has a vaguely pagan and druidical feel to it. 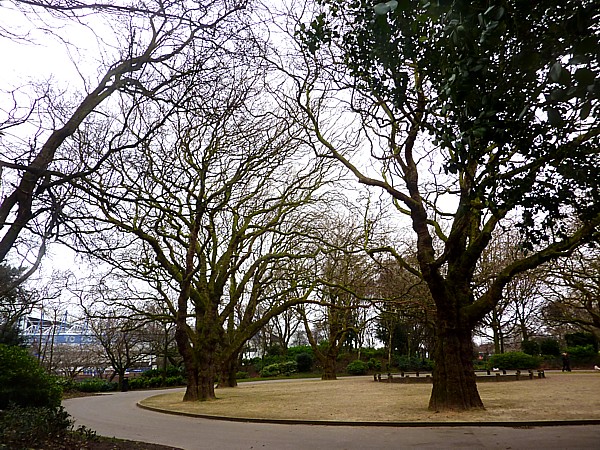 John remembers that same circle of eight trees being there when he was a child, and says they were big old trees then. Are they as old as the park? It was opened in 1870 so that would make them 144 years old. This blog says that “the London Plane is one of the few trees in the world whose life span is unknown to botanists. The reason for that is that this particular kind of plant life has not been around for long enough for its natural life expectancy to be ascertained. No London Plane tree has ever died of old age. Those that have expired were killed by injuries or by diseases, or by both, not by Father Time. The very oldest ones are about 400 years extant.”