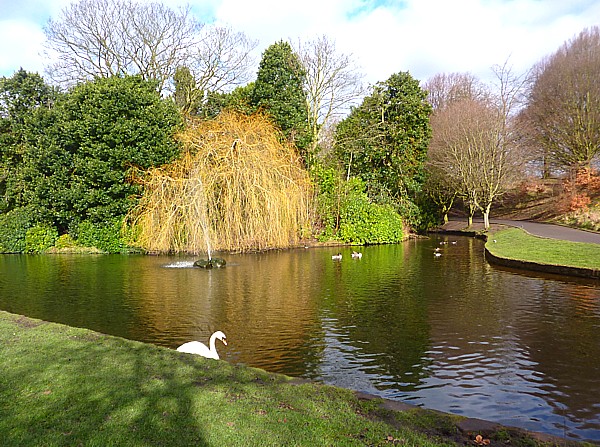 This series of short walks is an experiment this year, in response to some comments in the 2012/13 questionnaire that members would like half-day walks in parks. In the event, there were nine of us on the walk, seven regular members, one who hasn’t been out with us for a while, and a lady who isn’t a member but had heard about us from the man doing her gutters! (She was delighted to have found us and will be joining.)

It was a dry overcast day, and surprisingly warm – about 10°C, 50°F. Was there a touch of spring in the air? We met at the Lakeside café at the south end of the lake at 11 am. There was the usual scrum of birds coming to the children “feeding the ducks”. Canada Geese were parallel swimming and honking, so they think it’s spring. 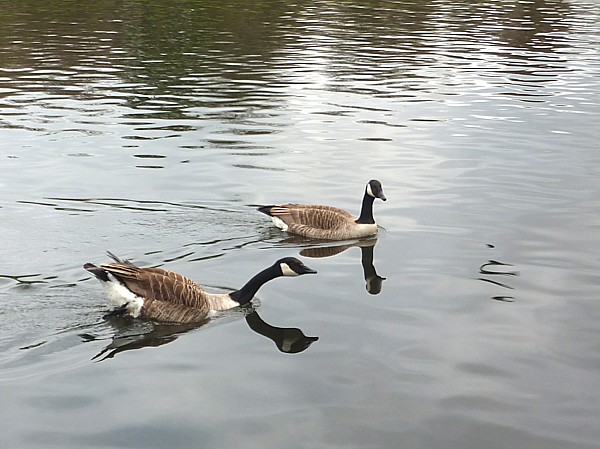 The Coots were fighting and splashing, so they are in the same mood. The Mallards were in their best plumage, and about 1 in 100 of the Black-headed Gulls were showing the first signs of their black heads. There were also Moorhens, Feral Pigeons, one Common Gull on the lake and Wood Pigeons on the banks. Seven Mute Swans were in attendance, four adults and three juveniles. John C recorded some Darvic rings. Juvenile, blue, right, 4ABB; juvenile, blue, right, 4ADZ; adult, blue, right, XZ6.  These have been reported to the North West Swan Study.
(Added 22nd February after hearing back from the study. They all seem to be young Sefton Park natives:
4ABB  was ringed as a cygnet at the park 2/9/2013  [now nearly a year old]
4ADZ – “details haven’t been sent to me yet, so must have been recently ringed, and probably at the park”
XZ6  was hatched 2012 and ringed 23/1/2013 at the park! [now two years old])

As we walked northwards we spotted the expected Little Grebes under the overhanging Rhododendrons near the north end of the main lake. Jim saw the most, claiming 14. They are doing well here. On the verges near the bandstand were Crows, Robins, Magpies, Long-tailed Tits, a Song Thrush,  a Grey Squirrel and a Buzzard circling overhead. Clusters of dark purple crocuses were out under the trees.

We stopped to admire a magnificent big bare tree on the Bandstand island. Is it a Beech? We’ll have to look at it again when the leaves come out. 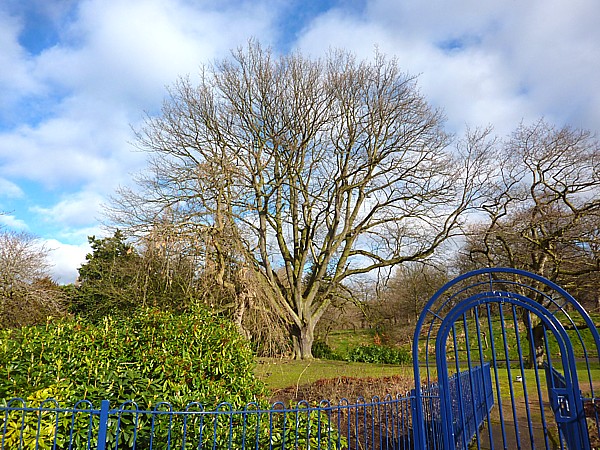 Skulking in a quiet corner north of the bandstand was a Great Crested Grebe. 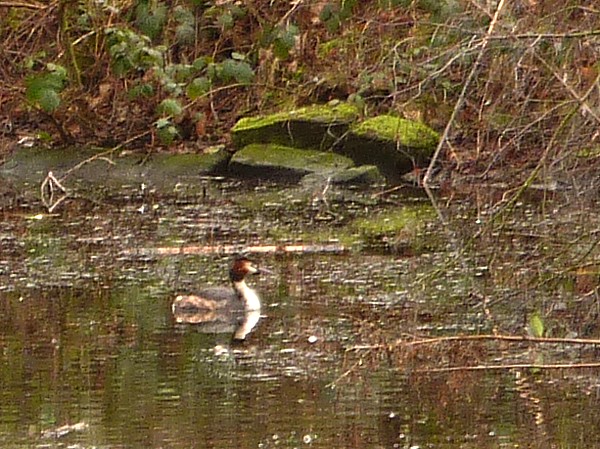 Near the Eros statue we noticed a lot of gulls circling high overhead. It’s a bit early for swarms of insects, so perhaps they had found a thermal. It was certainly getting quite warm, and the sun came out.  A flowering shrub on the corner was identified as Viburnum x bodnantense. It flowers through the winter, with fragrant blossom. 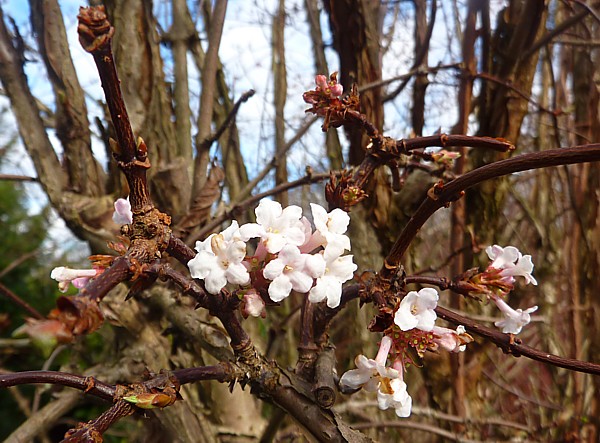 There was an old Goldfinch nest in it, and I noticed another of the same shrubs later on, and that had an old Goldfinch nest in it too. Obvously birds with good taste in homes!  Just as we were discussing the possible emergence of butterflies on such a warm day, we saw a Bumble Bee flying, although it was against the light and impossible to identify.  Nearby were more crocuses, yellow ones this time, and some Snowdrops. 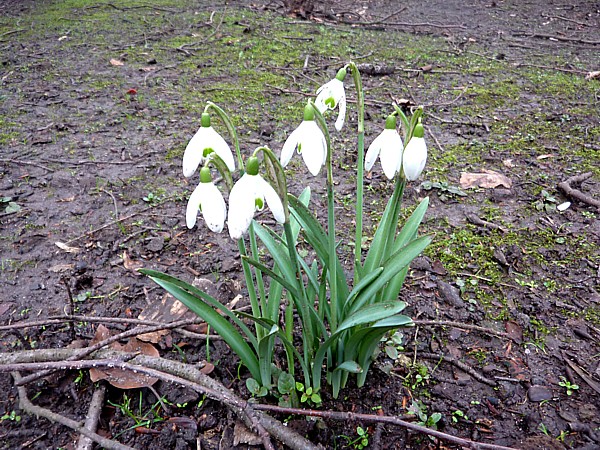 Some handsome trees dotted about the park fascinate me and I privately call them “explosion” trees. There is no main trunk, they just get to four or five feet then explode! 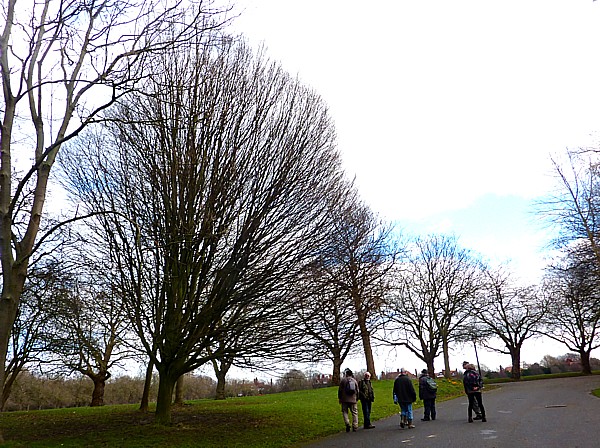 We looked at the twigs and buds, and they look like Beech, so it this a different variety, or is it the result of some sort of pollarding? 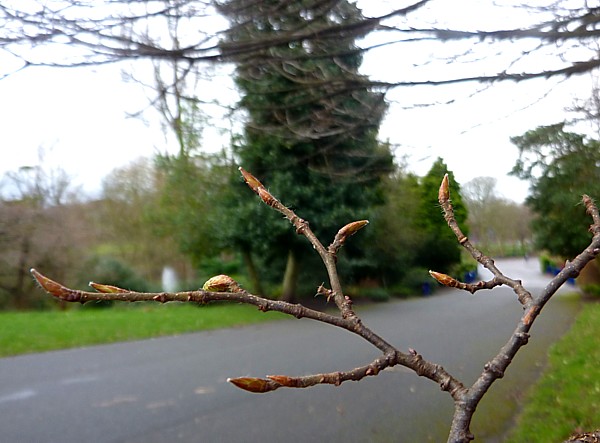 On the big field beyond the Palm House there was a flock of about 50 Black-headed Gulls, and three had almost fully black heads, much more developed than I’ve noticed anywhere else. There were Jackdaws with them and another Common Gull. Someone said they’d seen a Herring Gull, too, but there weren’t many about.  In the Dell, John produced some birdseed and scattered it on the ground. A Dunnock came, a Great Tit, some Wood Pigeons, Crows and Blackbirds.

Around the corner, surrounding an old tree  stump, was a low plant with white tube or trumpet flowers, looking like Comfrey but white and low. Anyone know what it is? 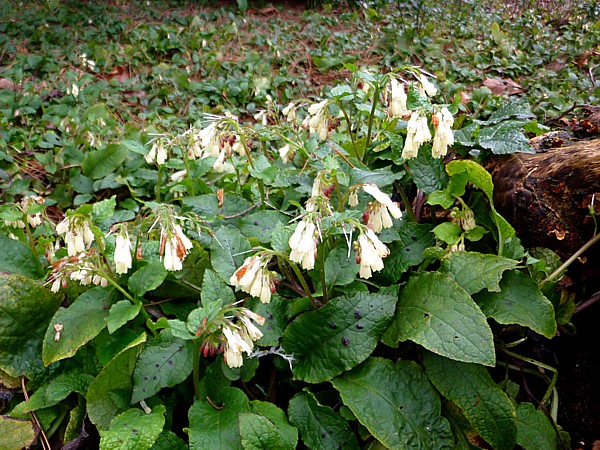 John then produced mealworms and balanced some on a fence near the park bird feeders. Long-tailed Tits came, Blue Tits and a Great Tit. There was a Goldcrest flitting about in a tree above our heads and we also spotted a Nuthatch. There was a  Brown Rat on the ground, feeding off the scattered seed and nuts. A Great Spotted Woodpecker flew over. Then we heard the squawks of a Ring-necked Parakeet and traced it to some apples put out for them on the other side of the path. I’ve never seen one before so that’s a “lifer” for me! 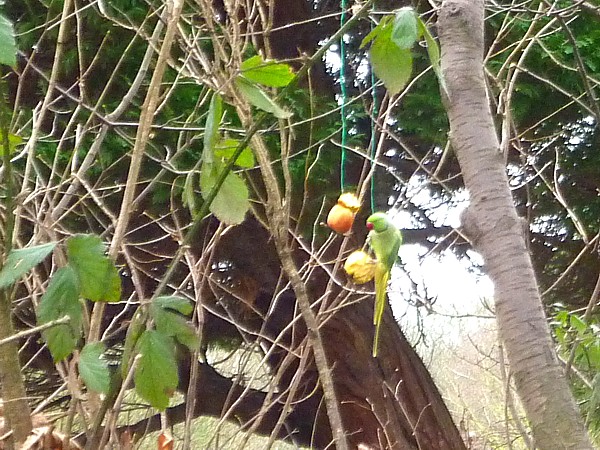 We wandered back to the Lakeside café for 1 pm and went our separate ways. I make that 27 birds and two mammals. Not bad for a walk in the park.  The only other “animal” of note was this one in the Palm House. 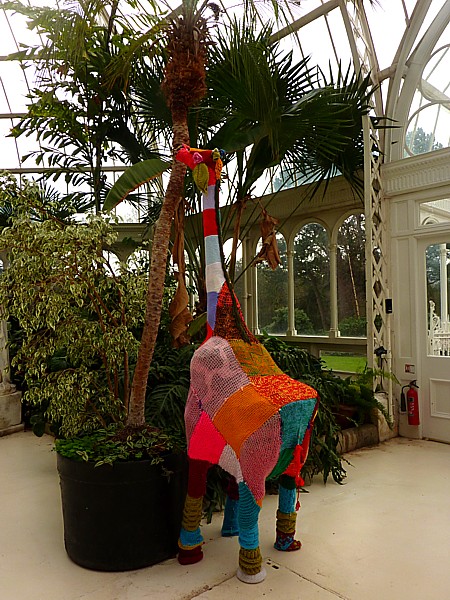