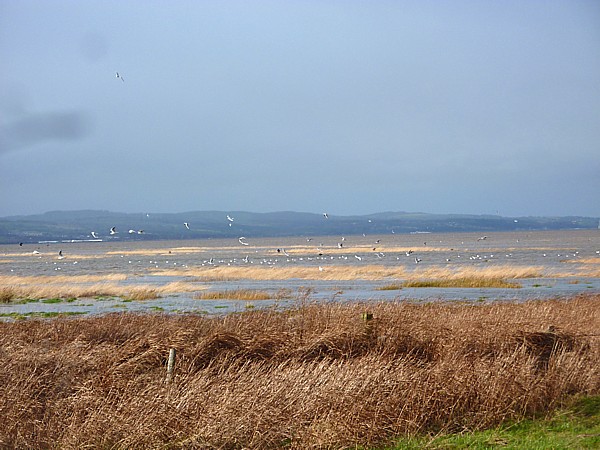 Ten of us met at Sir Thomas Street for the 487 at 9.46, arriving Neston Cross, Brook Street at 10.38. Despite the forecast of heavy, persistent rain and strong winds, we were lured out by one of the highest tides of the year, due about lunchtime. In fact, it was bright and sunny, if a little blustery. As we passed through the church St Mary and St Helen we spotted our first birds, Long-tailed Tits and Great Tits. 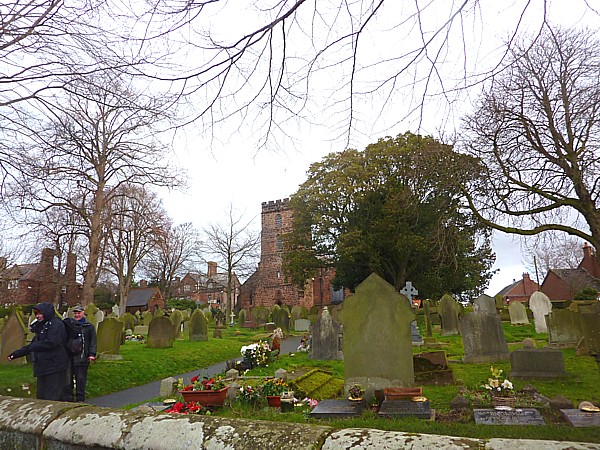 We crossed the Wirral Way and some muddy fields near the sewage works. A tree was full of Carrion Crows, Jackdaws were calling and Goldfinches were twittering. The combination of recent heavy rains and, later, the high tide, turned our walk into a bit of an obstacle course, the first of which was the well-puddled kissing gate, which most of us preferred to avoid, climbing through the fence instead. 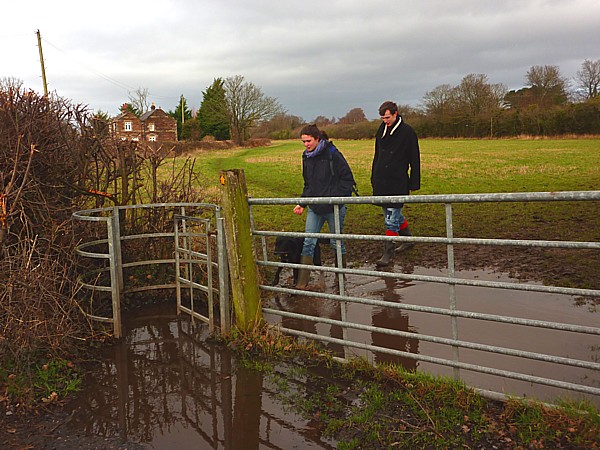 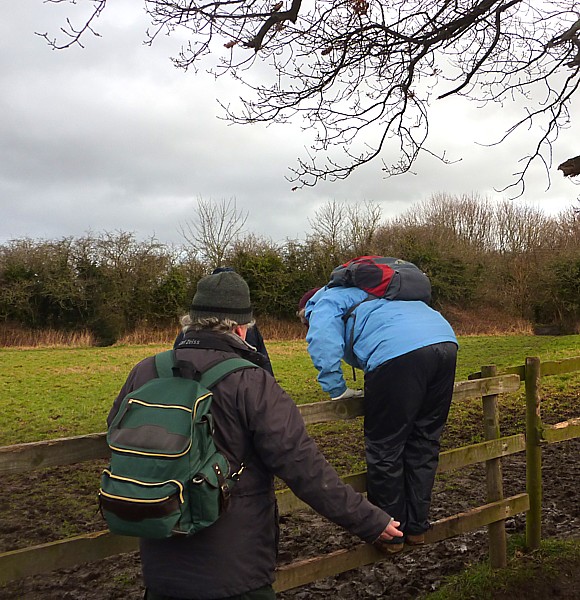 This is horse country, and one paddock had lots of Redwings, Song Thrushes, Starlings and Chaffinches on the ground. In the hedges near the quay we noted Robin, Blackbird, Meadow Pipits and a Reed Bunting. 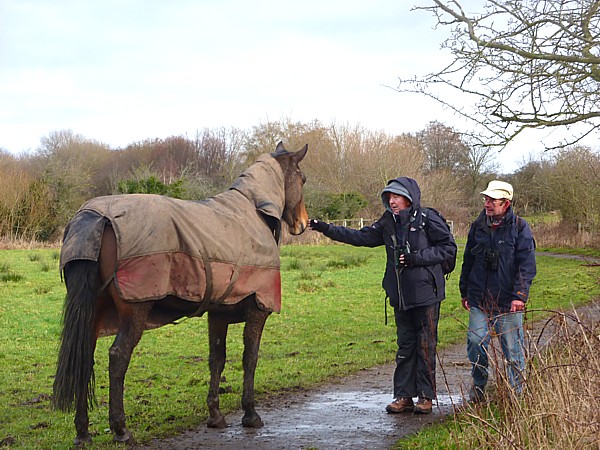 When we reached the Old Quay the marshes were filling up. Greylag Geese, Cormorants, a big flock of Pink-footed Geese in the distance. 100+ Oyster Catchers were in flight, a couple of dozen Black-tailed Godwits clustered in a pool, Carrion Crows hunted in the shallows, Skylarks flew up as the water advanced and Black-headed Gulls wheeled overhead. A huge flock of Curlews took off and the Pinkfeet all started to fly upriver. Shelduck and Redshank came nearer and a Little Egret poked about the clumps of grass. There were Teal, with a few Pintail amongst them, Mallards, a Heron, Lapwings wheeling and Lesser Black-backed Gulls joining the hunt. A scatter of showers produced a rainbow, then it was sunny again. And the tide just kept on rising. 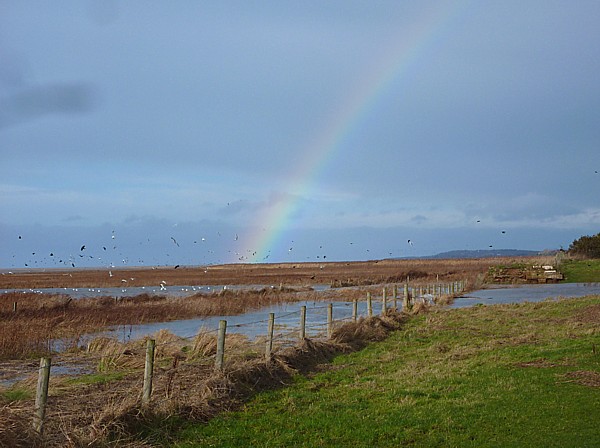 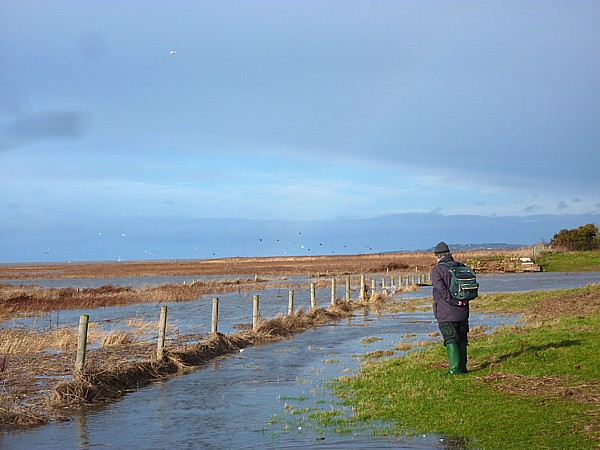 As the water passed the fence line the little beasties started swimming in. The first was a small unidentified mammal which disappeared into the rough grass below the fence. Then a bigger creature emerged, either a Water Vole or a Rat, but that hid itself quickly, too. Then the best one of the day arrived, a Field Vole aka Short-tailed Vole Microtus agrestis, which ran right up to us in its panic, briefly skulked by my feet as if it was hoping to run up my trouser leg, then burrowed into a pile of mulch. I managed to get two rather hurried pictures of it, though. 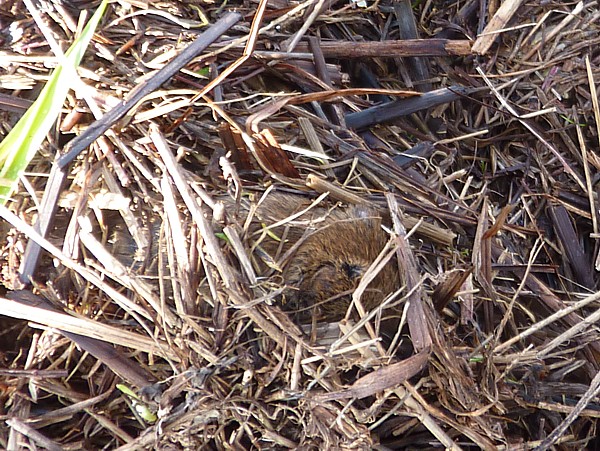 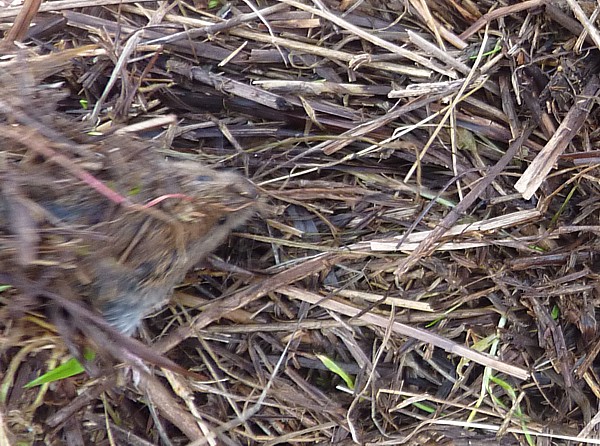 We ate our lunch while we waited for the waters to go down. A Grey Wagtail flitted past, then out onto the marsh. Drama was provided by a Cormorant which had caught a huge eel. Part of the eel was down the bird’s throat, but at least a foot was still hanging out. The semi-throttled Cormorant thrashed and plunged, the eel flexed and jerked, and there was much splashing as the Cormorant struggled to overpower its catch. Eventually it swallowed it all down and took off, but then thought the better of it, perhaps finding itself too heavy. As it settled back onto the water we could see its swollen crop.

Jim H arrived, having walked from Gayton. He had seen a Great White Egret at Parkgate, three Short-eared Owls and eight Little Egrets. He said it was pandemonium back there, with thousands of people crowding the prom and chaotic traffic. We had had a far better view where we were. The only problem was the time it was taking for the water to recede and the path to emerge from the water. Eventually we got tired of waiting and went around by a field and struggled through a barbed wire fence, our second obstacle of the day. A party of young Ramblers was doing the same. 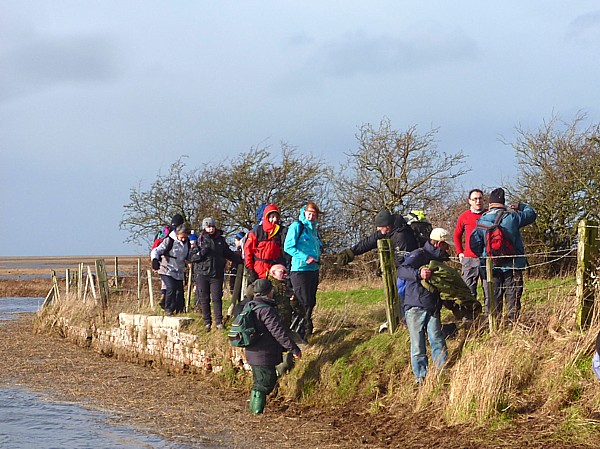 Our third obstacle was the flooded Marshlands Road before the Harp Inn. We went around it by  Orchard Drive and spotted a Tree Sparrow behind the Harp, so that was an unexpected bonus. It was still sunny and blustery with just a few spots of rain. Where was the downpour we had heard about? From the Harp Inn we saw two Mute Swans and thousands of Oyster Catchers in a black line out on a bank. Further along the cycle path was another bit of flooding, our fourth obstacle. Jim commented that Commando training was essential today! 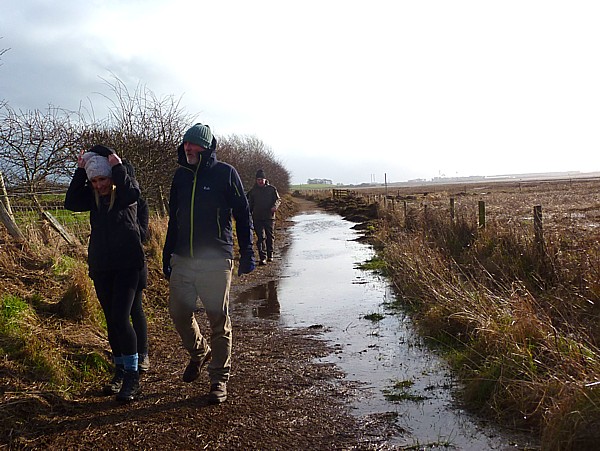 As we approached Denhall Lane we saw a Great White Egret ahead. We hadn’t seen the one from Parkgate pass us, so was this a second bird?  A female Kestrel was hovering, with her head into the onshore wind. Someone spotted an old damaged nest, probably made by a Goldfinch, and there was some yellow lichen on a Blackthorn twig. I think it’s Xanthoria parietina, called Common Orange Lichen, Yellow Scale, Maritime Sunburst Lichen or Shore Lichen. It is said to be widespread and often found near the shore. 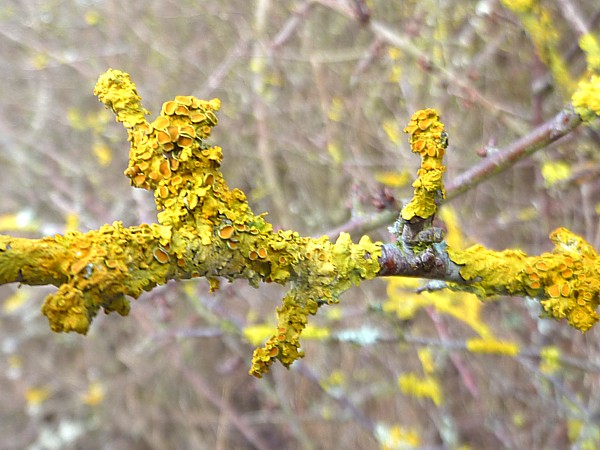 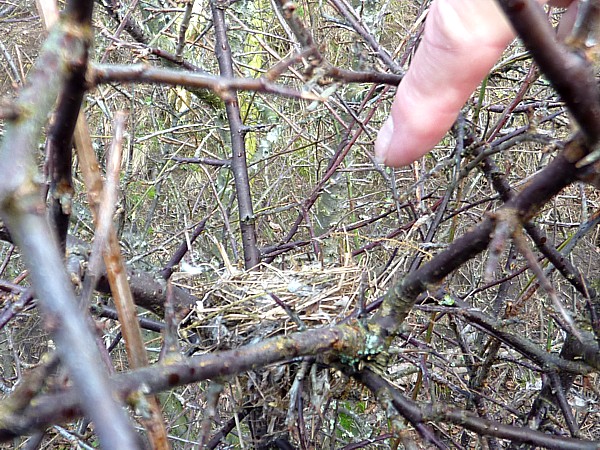 There was now some very thick grey cloud and rain behind us and over to the Welsh side, so we picked up our pace, stopping briefly to admire a weather vane near Denhall Fishery, made in the likeness of a pair of Pintail. 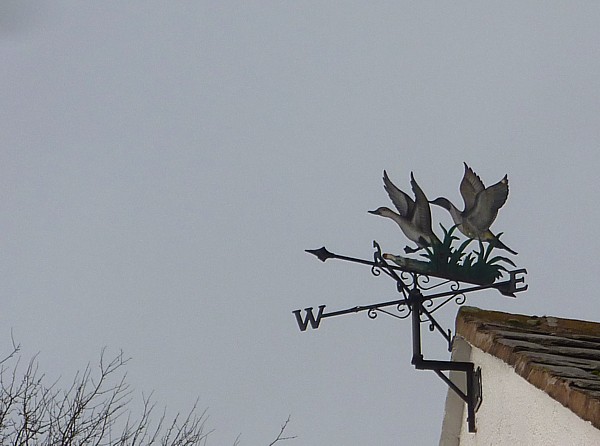 Dave B pointed out the verge below the sandstone wall on the corner of Denhall Lane, which is a known spot for the rare Early Purple variety of Sweet Violet, Viola odorata var. praecox. It was still there, flowering daintily. Eric Hardy wrote about it in January 1984, and you can read it on page 30, column 1 of In the Footsteps of Eric Hardy. 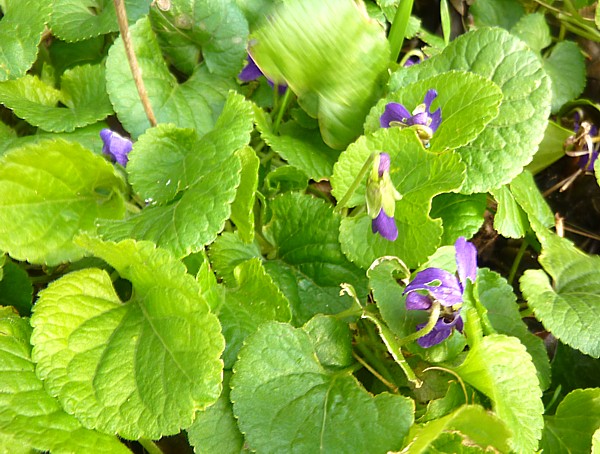 The Daffodils were nearly out in Denhall Lane, Lesser Periwinkle was flowering, and there were two types of fern, Hart’s Tongue Fern and a big spread of what might be Royal Fern, although David B said he would have to see it in flower later in the year to be sure. (Added 12th Feb – DB now thinks is is merely Common Polypody.) 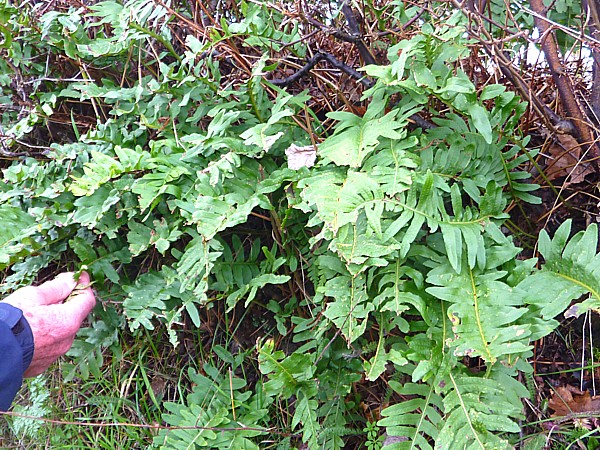 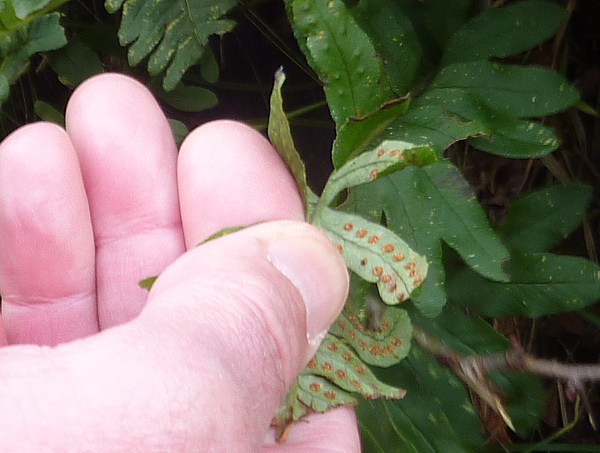 As we neared the top of Denhall Lane skeins of Pink-footed Geese were flying overhead, heading back to the Marsh. The two people who were in front managed to jump on to the 2.31 bus at the turnaround, but the rest of us headed the few hundred yards to Ness Gardens. Just as we arrived the torrential rain and wind came in, and roared against the windows of the shop and café area. Excellent timing!  On the next 487 bus back to Liverpool, we compared notes and counted 36 or 37 bird species for the day.