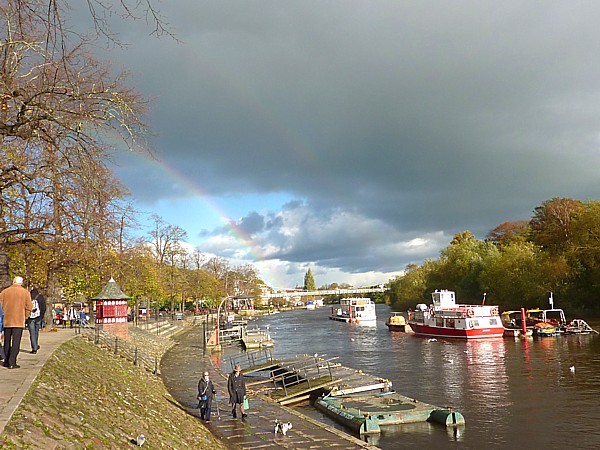 After a windy night, which blew my rubbish bins around, it was a day of mixed sunshine, heavy showers and rainbows. The sun was shining as we walked down to the canal just below Chester Station and headed for the Telford warehouse. At Cow Lane Bridge there were Mallards and Black-headed Gulls crowding around for bread, and just beyond it there was an unusual ornamental Rowan tree with yellow berries. 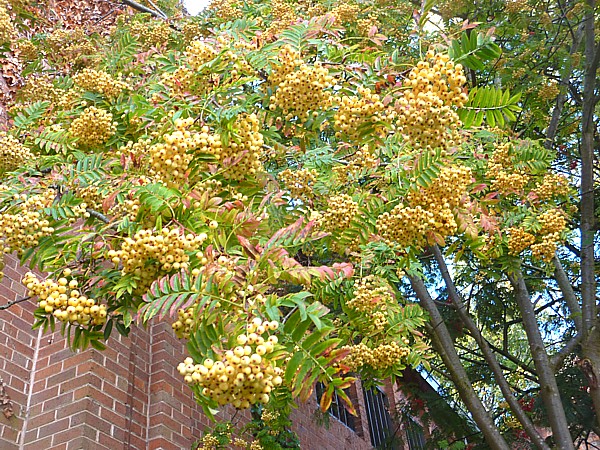 Near Northgate Moorings we saw the last flowers of Himalayan Balsam, some Ivy in flower, attended by just a few small wasps, and this small clump of yellow flowers, which I can’t identify. The clump shape reminded me of Wood Sorrel, but the flowers were like Cowslips. Anyone any ideas? It’s probably not a native wildflower but a garden escape.  (Added later: Canary Creeper Tropaeolum peregrinum has been suggested, but neither the leaf shape, the flower shape or the growth habit seem to be the same.)(Added even later – thanks to Charles Russell who has nailed it. It’s Yellow Corydalis Pseudofumaria lutea (formerly Corydalis lutea), a shade-loving native of the Alps, found occasionally in the UK as a garden escape. It’s said to flower to the end of October, so the one I saw was only a bit late.) 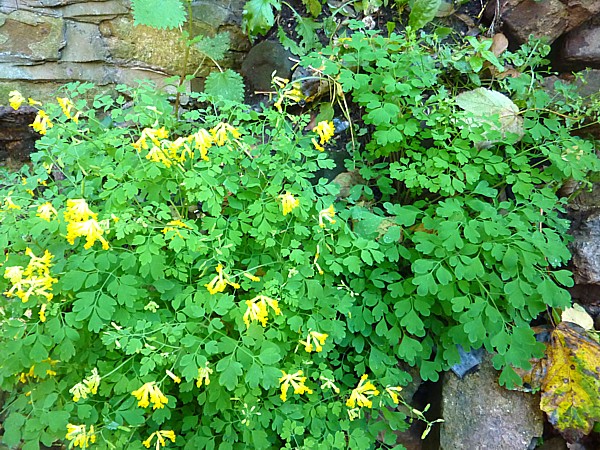 At Northgate top lock, the narrow boat Black Eyed Susan was coming through and we loitered for a while to watch. 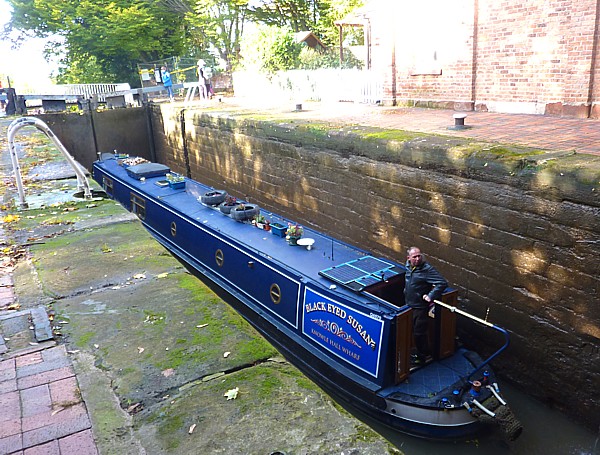 We lunched at the Telford warehouse. The regular pair of Mute Swans there didn’t come close enough for us to check their legs for rings. Then up onto the walls at the Water Tower, where we saw Mahonia in flower, a Grey Squirrel, and a view over the River Dee to the brilliant sunshine topping the Welsh hills. Over the Roodee racecourse we spotted a Raven and we also noticed that the Little Roodee café by the coach park has a “green” grass roof.

Opposite the University of Chester building there were some Teal on the river, and a Cormorant who had just caught a fish. We spotted a Mink here a few years ago, scuttling amongst the willow scrub on the muddy bank of the Dee, but there was no sign today.  A dead tree had caught on the weir, and sitting in it was a Greater Black-backed Gull, a juvenile (Common?) Gull and two Cormorants. 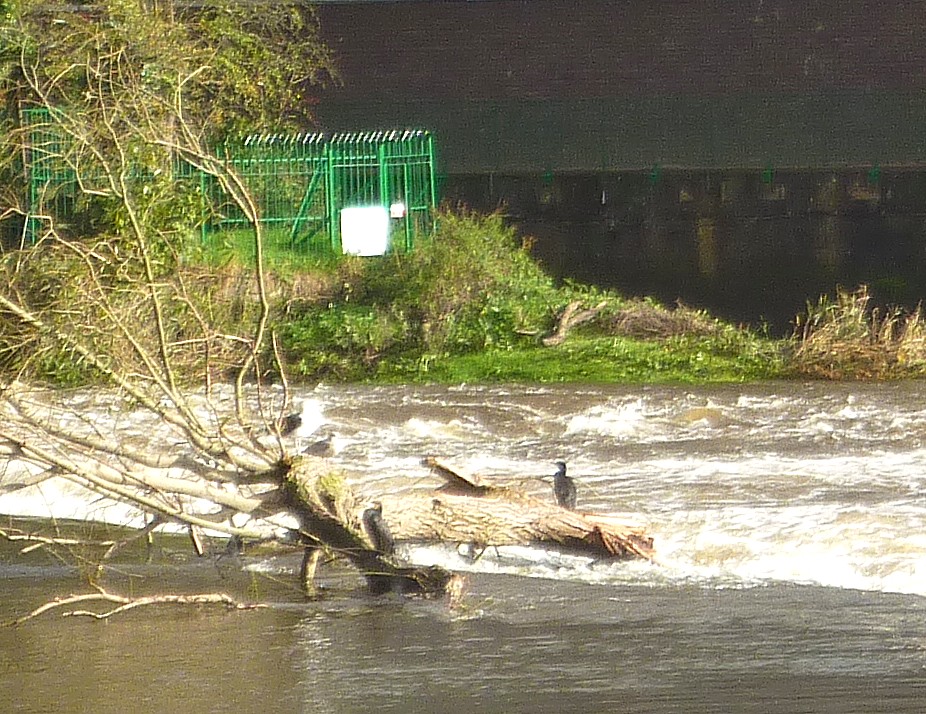 Along the Groves were four Mute Swans, two adults and two big grey-brown cygnets. One adult wasn’t ringed but the other adult had a blue Darvic ring 7CXJ on its left leg, while the two cygnets had green rings, left leg, CDY4 and CDY5. I reported them to the Cheshire Swan Study Group  who have told me that the ringed adult was the male, now 10 or 11 years old and ringed at Buttery Farm, Kynnersley, Telford in April 2004. He has been sighted on the Dee at Chester many times since 2009. His cygnets are both male, and were ringed on the Dee on 30th September this year.

We weren’t back at the station in time for the 2pm train so while we waited we looked into the old stable yard behind the Queens Hotel. The gateway says “Carriages and Post Horses for Hire”. 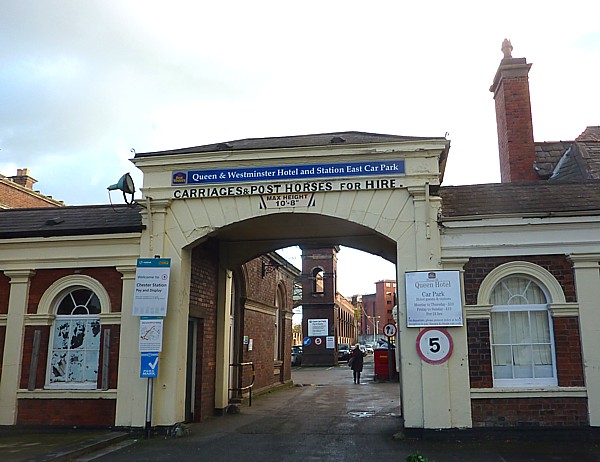 Inside there are a few remaining old offices and stables from what was once the biggest stable complex in the North West of England. As well as the commercial horse-hiring associated with the hotel, the stables once housed the Cheshire Hunt. 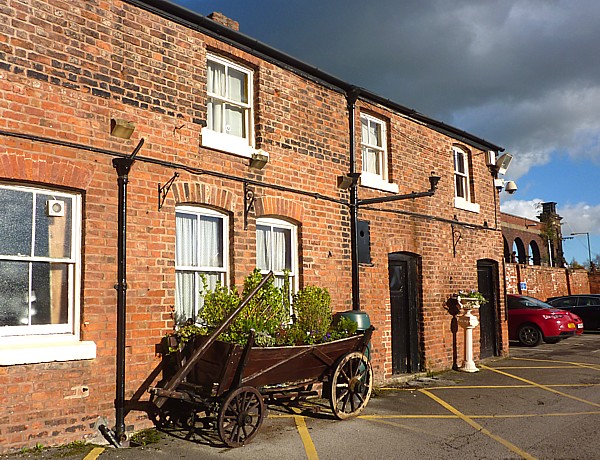 Public transport details: Train from Liverpool Central to Chester at 10.15, arriving 11.00. Returned on the 2.30 train from Chester to Liverpool.