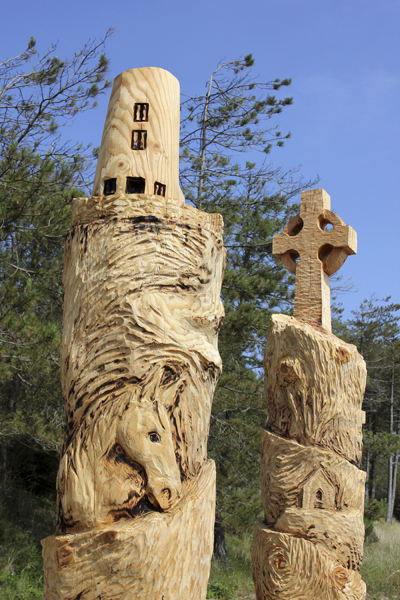 Taking advantage of the continuing heatwave Richard Surman, the two Daves and I headed over to Anglesey to visit the stunning location of Llanddwyn Island (Ynys Llanddwyn) at the far end of the beach at Newborough Warren.

We drove down the small road through the shady NewboroughForest before parking up amidst the crowds. After admiring the some artwork designed by local school children comprising three tree trunks carved to depict the local wildlife and history we briefly listened to a Siskin calling from the Pines then headed along the newly constructed boardwalk onto the sandy beach. A few shells were identified Common Cockle Cerastoderma edule, Common Mussel Mytilus edulis, Common Razor Shell Ensis ensis and Variegated Scallop Chlamys varia. A trio of Jellyfish: Moon Jellyfish Aurelia aurita, Lion’s Mane Jellyfish Cyanea capillata and one of my faves the Blue Jellyfish Cyanea lamarckii. A few crabs with dead Common Shore Crabs Carcinus maenas and the carapace of a European Spider Crab Maja squinado plus a live unidentified Hermit Crab hiding out in the shell of a Common Whelk Buccinum undatum. 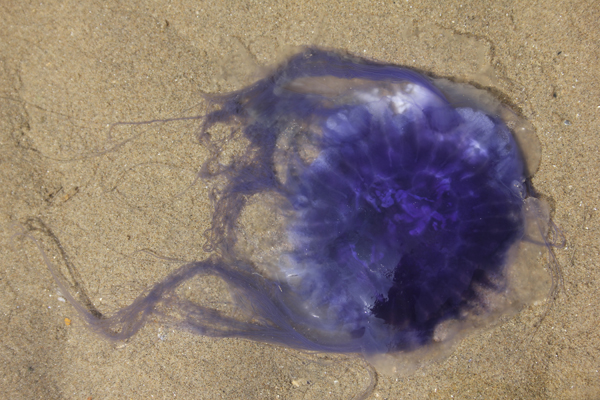 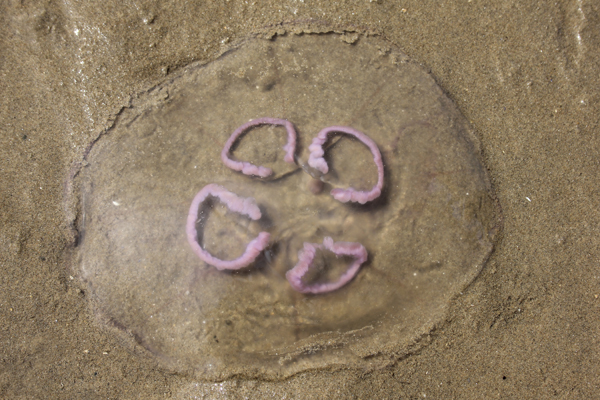 Lugworms Arenicola diversicolor had exuded the coils of mud from their burrows on top of a small mound, there were a few Sand-mason Worms Lanice conchilega with their sand covered feeding tentacles and I found a Tube Case of the Bristleworm Pectinaria koreni. A shell was covered in the aptly named Volcano Barnacle Balanus perforatus. 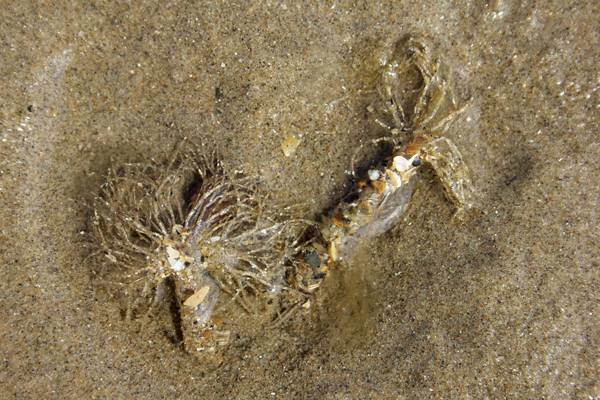 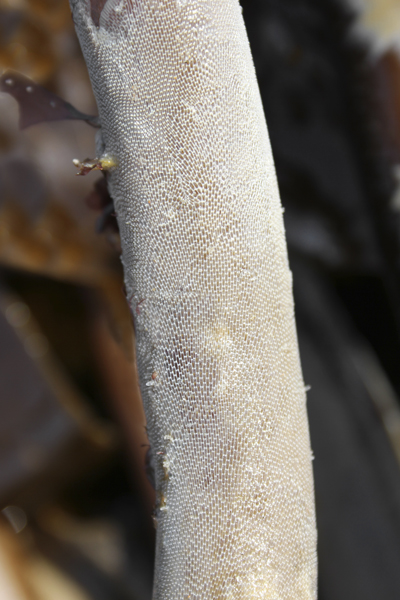 A large clump of Kelp Laminaria sp. had washed up on the beach its stem covered in the bryozoan Kelp Sea Mat Membranipora membranacea.

As we approached the island we passed several large rocks in the sand which are basaltic pillow lavas, part of the Pre-cambrian Gwna Group. They were formed by undersea volcanic eruptions; as the molten rock billowed out meeting the cold sea water the rock solidified producing this pillow shape. 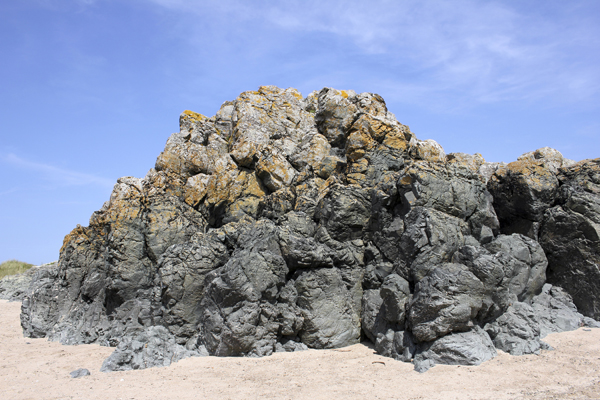 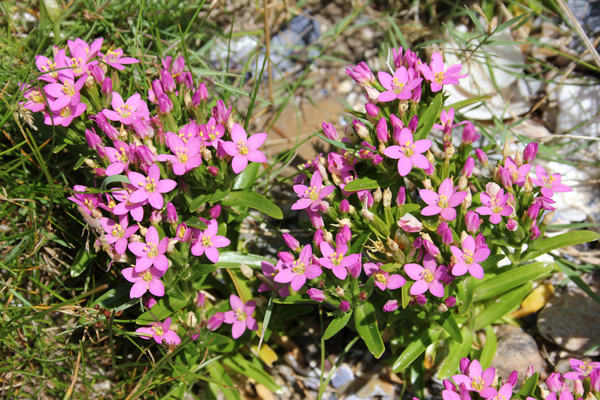 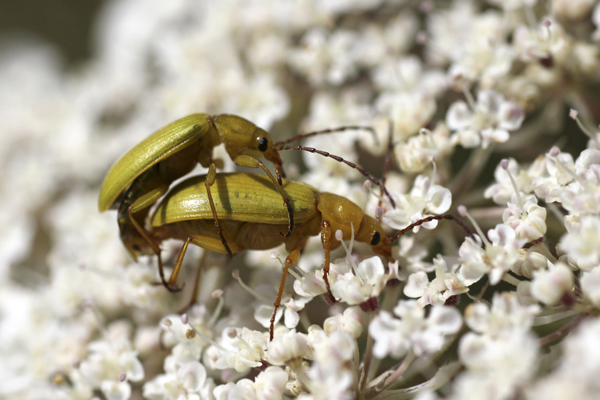 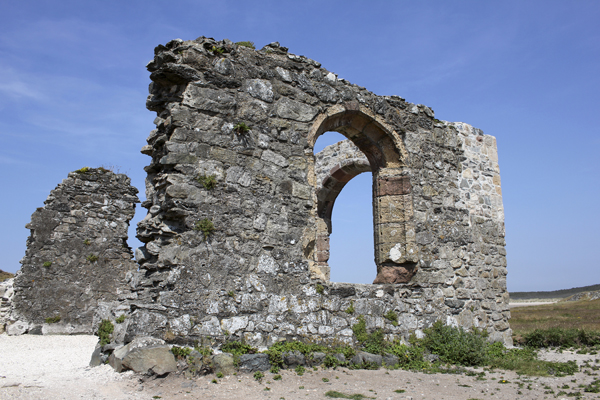 As the guys found a shady spot for lunch beside a rock face on which was growing Sea Spleenwort Asplenium marinum I photographed the ruins of Llanddeyn Chapel built in the 16th Century dedicated to St. Dwynwen – who lived on the island in the 5th Century and is a patron saint of lovers, making her the Welsh equivalent of St. Valentine.

A beacon, called Tŵr Bach, was built at the tip of LlandwynnIsland to provide guidance to ships entering the Menai Straits with a more effective lighthouse, Tŵr Mawr built nearby in 1845. We had a nose around Pilot’s Cove below the lighthouse where an isolated mass of rock shows various types of altered pillow lavas amid red jasper and green chlorite-rich material (altered mudstone). We also found plenty of Native Oyster Ostrea edulis shells plus the remnants of a European Spider Crab Maja squinado and an Oystercatcher and disturbed a Ringed Plover on the beach that Richard observed take over nest duties from its camouflaged mate hunkered down on their nest amongst the pebbles. 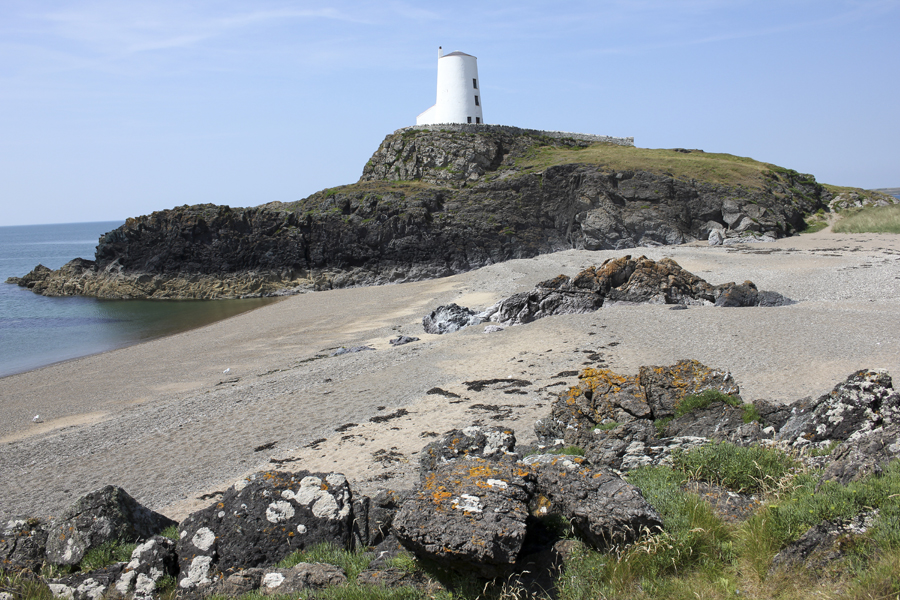 The lighthouse was a great place for a bit of sea-watching a number of small islets held Cormorants, Shags and Oyks. Manx Shearwaters were fishing out on the sea and Gannets passing by. A Lion’s Mane Jellyfish was floating out in the bay – at one point moving against the tidal flow of the water. We noted the candy pink and white Sea Bindweed Calystegia soldanella , a Speckled Wood Pararge aegeria holidaying away from it’s usual habitat and scrambled around the rocks which held Rock Sea-lavender Limonium binervosum, Rock Samphire Crithmum maritimum and Golden-samphire Inula crithmoides and a Grayling Hipparchia semele. A colony of Mining Bees were busy flying in and out of their holes in a sunny bank – DaveH managed to capture one of the small Mining Bees in a tube for identification.

We walked through a wooden gate and onto a secluded bay which had a profusion of Bladder Wrack Fucus vesiculosus with smaller patches of Gutweed Enteromorpha intestinalis and Sea Lettuce Ulva lactuca plus a couple of Lion’s Mane Jellyfish. The rocks had a few Common Limpet Patella vulgata and were covered in the usual maritime lichens Sea Ivory Ramalina siliquosa, Calcoplaca marina and Verrucaria maura whose thin black thallus can easily be mistaken for an oil spill. 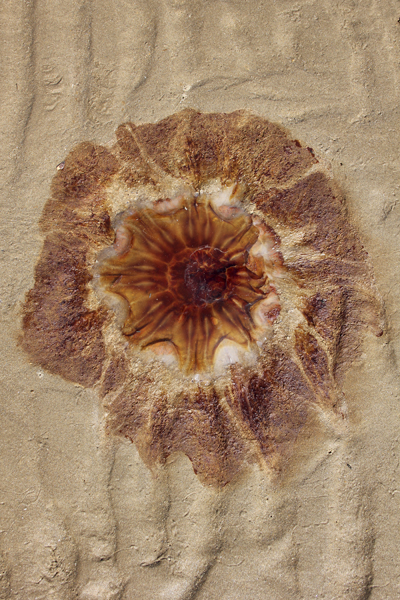 Wandering back onto the island we watched a close flock of around fifty Manxies which were feeding – flying low over the sea before quickly landing and swimming down into the water. They were joined by diving Sandwich Terns and a couple of Common Guillemots.

Returning back along the beach we found the desiccated remains of a large Lion’s Mane Jellyfish with another smaller individual floating in with the tide and a Wall Butterfly Lasiommata megera was seen flying along the sand. Back at the car a couple of croaky Ravens bade us farewell after a memorable day.