With another hot and sunny day in prospect we met at Sir Thomas Street for the 487 Parkgate bus at 10.30. We got off at Neston near Sainsbury’s, walked through the churchyard, down Church Lane, across the Wirral Way, and came to the footpath which ran to the Old Quay through buttercup meadows. 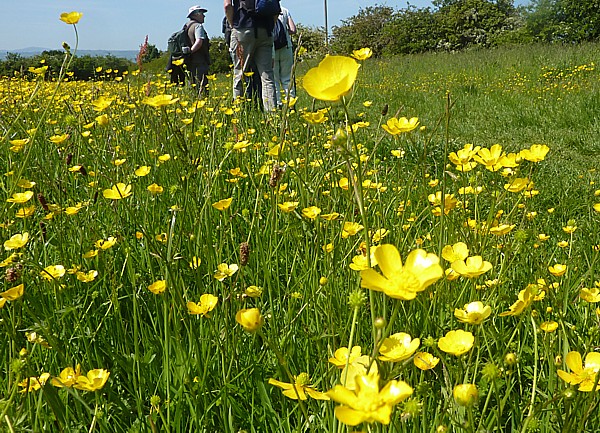 There was a grand view over to Moel Famau. 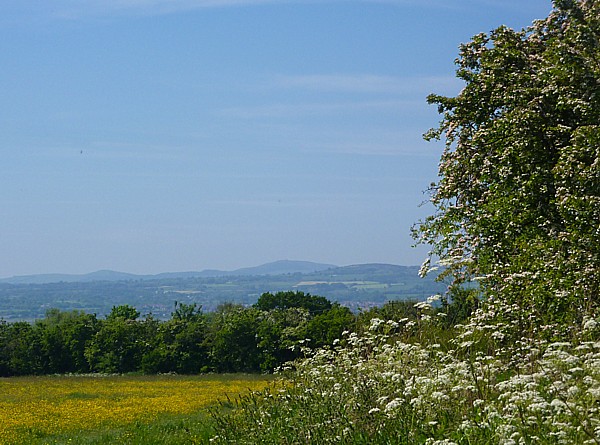 Chiffchaffs and Chaffinches were calling. We noted Swallows, Wood Pigeons, Jackdaws and Carrion Crows. There was a Buzzard on telegraph pole, threatened by a Magpie and then by a Jay. It flew off but soon returned. A knowledgeable passer-by said there are two regular buzzards over that field, and also mentioned Water Pipits that pass through the nearby sewage works in spring.

Goldfinches were twittering in the willows and a young Blackbird sat low on a fallen branch, gaping in the heat. We lunched at Old Quay, watching various butterflies in the warm sunshine – Small Tortoiseshell, Small White and a very ragged Peacock. Little Egrets and Herons flew over the marsh. 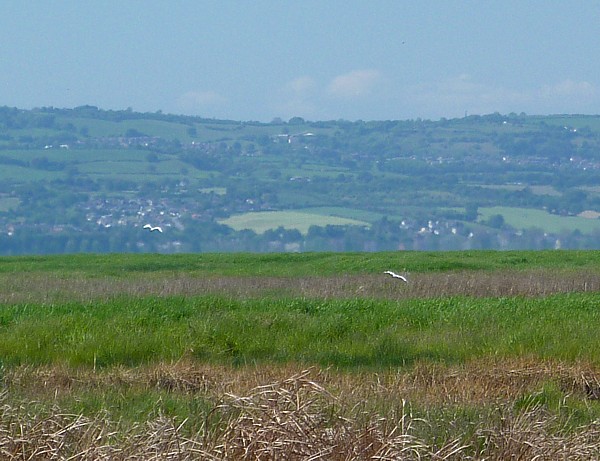 Then we turned southwards along the footpath towards Burton. A dungheap near a field of horses had a crop of large fungi, looking like Shaggy Ink Caps, although they weren’t very shaggy. 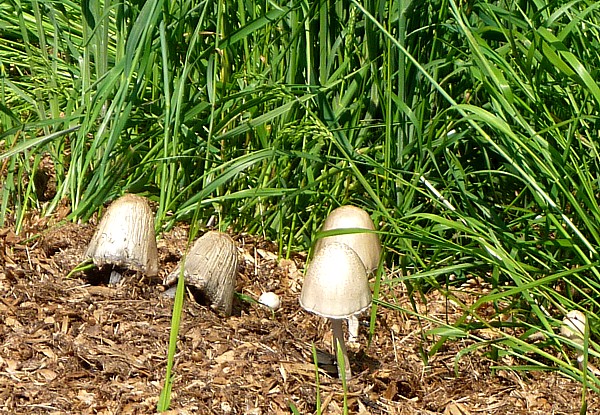 The path borders were full of wild flowers. Green Alkanet, Red Campion, Speedwell, Flag Iris, Bird’s Foot Trefoil, Horse Radish in flower, White Campion, Dog Rose, Periwinkle, Yarrow, Meadow Cranesbill, and a smaller member of the same family which I think was Hedgerow Cranesbill. It’s found in North Wales but not Lancashire or Merseyside. I suppose the Neston / Burton area might be at the northern end of its range. 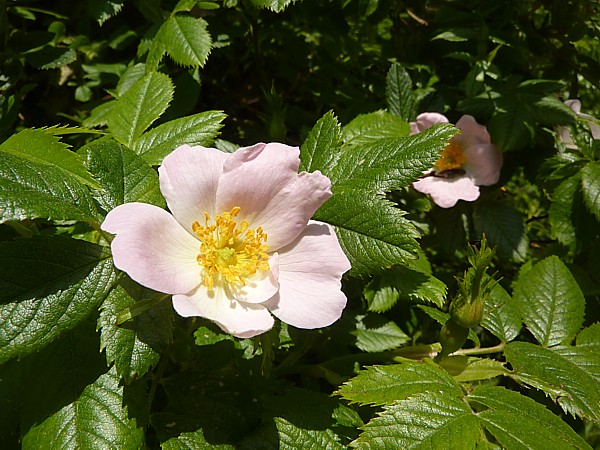 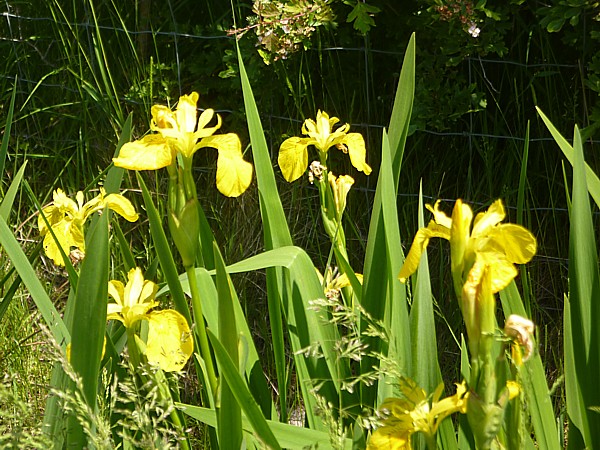 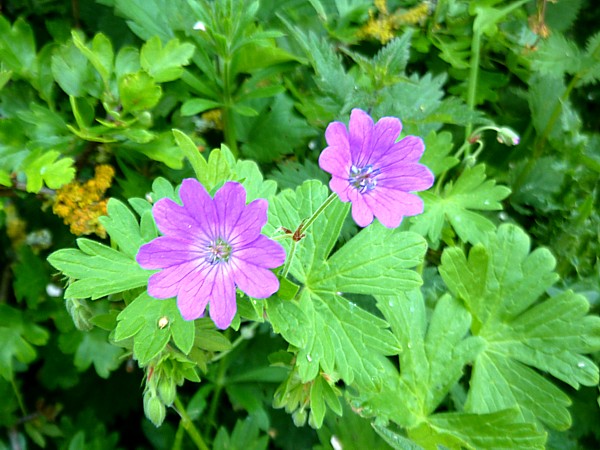 A garden near the Harp Inn had Red Valerian and also a pink tree that was probably a Tamarisk. A pool in the marshes near the Firing Range held Shelduck, Canada Geese and another Little Egret. Beyond them were grazing sheep. Were they carrying out conservation grazing or is a local farmer raising expensive salt marsh lamb?  Outside the gates of Denhall Fishery were two very surprising stone lions, looking over to Flintshire. 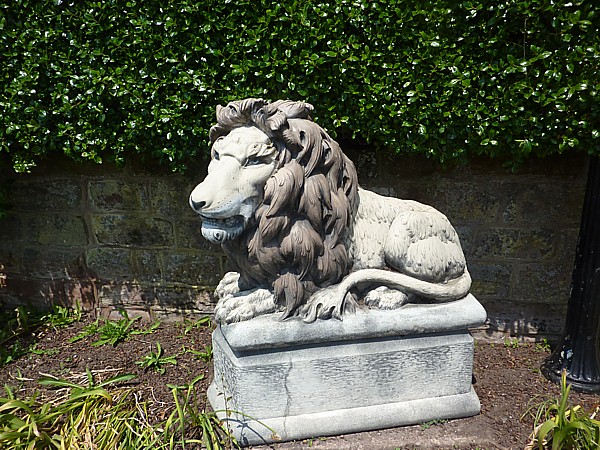 Before Burton we turned uphill towards Ness Gardens. On the verge near the entrance we found an orchid. They are very variable, but this is probably in the Early Marsh Orchid group. 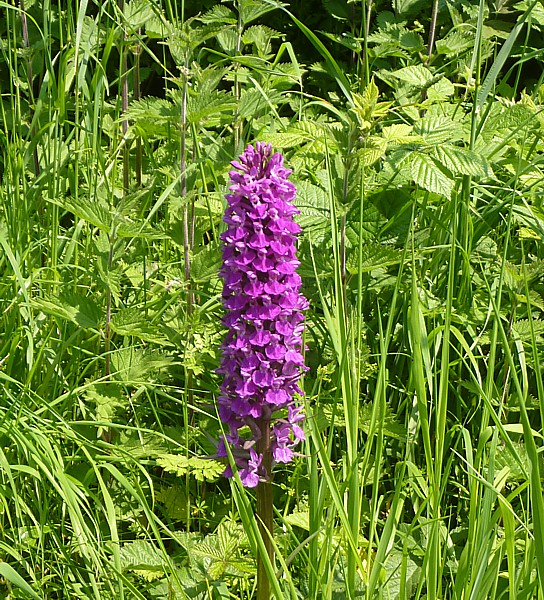 Most of us had an ice cream (mine was mango and passion fruit) and then we sat in the sun waiting for the 488 bus at 2.30 back to Liverpool.