Posted on October 6, 2012 by Sabena Blackbird

On Saturday, 6th October, the sun shone. So I went for a walk around the woods at Hale: Hale Hall Wood and The Icehouse Plantation.

The primary reason was to check on a fungus, Rhodotus palmatus (Wrinkled Peach). I found this a couple of years ago and was asked to send specimens to Kew Herbarium. So far, it is the most northerly British record. 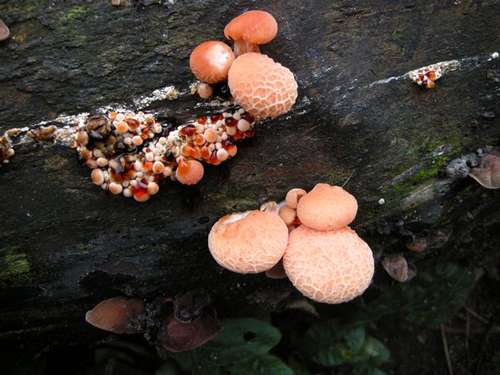 It grows on a felled tree that straddles the footpath to the river. Due to the wet weather, the path has become impassable. The fungus has been undisturbed and has increased in size and number.

Its favourite substrate is Elm but, here it has grown on Ash, along with a good collection of Daldinia concentrica (Cramp Balls), one of which had been infected with an uncommon parasite, Nectria inventa.

Beside the old Icehouse now covered in vegetation, I came across a felled Oak tree with pruned branches stacked beside it. Someone had tried to burn the branches which were blackened and charred.

However, growing on these branches was another Daldinia: Daldinia fissa.

This is extremely unusual as this fungus normally grows on burnt Gorse. There is only one other British record for it growing on Oak. 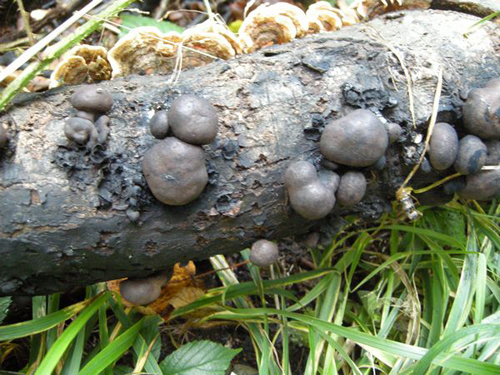 I reported my finding to Kew Herbarium and they have asked me to send specimens to them.

These two woods are small but very old. To be asked to send specimens of two fungi from such a small area makes this a very special site.