It was warm, bright and clear first thing, and although heavy rain had been forecast it didnt really come down until about 2 o’clock when we were nearly at Sandhills on our way home.

Liverpool Geological Society published a little booklet in 2001 called “Rock around Liverpool”, which we used as our guide to rock and fossil hunting. The Queen Victoria Monument has sandstone steps at the bottom, then carboniferous grey limestone. Many of the limestone steps, especially opposite the Courthouse, show large fossil Brachiopod shells, a species of Productus. There is a pound coin for scale on the picture below. 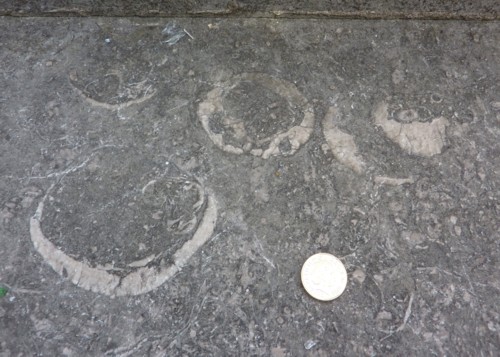 The upper part of the monument is Portland Roach stone, a shelly oolitic limestone coming from the uppermost part of the Portland Stone Formation of the Upper Jurassic Period on the Isle of Portland in Dorset. It contains several casts or moulds of the turreted shell known to the quarrymen as the “Portland screw” (Aptyxiella portlanica). The biggest is about an inch long. They are on the wall behind the figure of the men holding a ship. 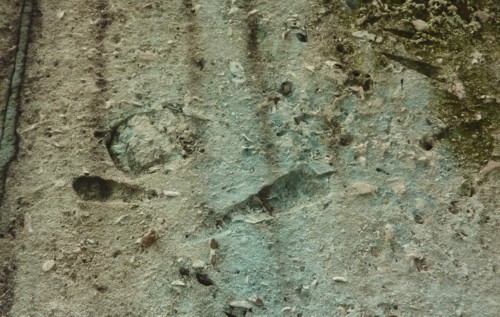 The doorstep of no. 47 Castle Street should be made of Rapakivi granite, the oldest building stone in Liverpool, quarried in Finland and said to be 1.5 billion years old. Alas, the step has been re-tiled. But there is more of it at the bottom of the former Allied Irish Bank on the corner of Dale Stret and Exchange Street East (now Venmure). 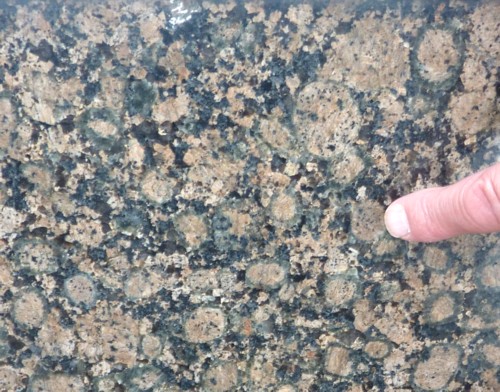 On Castle Street, outside the NatWest Bank is a stone in the parking bay called the “Sanctuary Stone”, about a foot across. It’s historically significant as a marker of one of the boundaries of the old Liverpool Market. “Rock around Liverpool” says. “Remarkably it is of a coarsely fragmental rock, a volcanic agglomerate, derived from Ordovician Borrowdale from the Lake District. Probably got to Liverpool as a glacial erratic.” 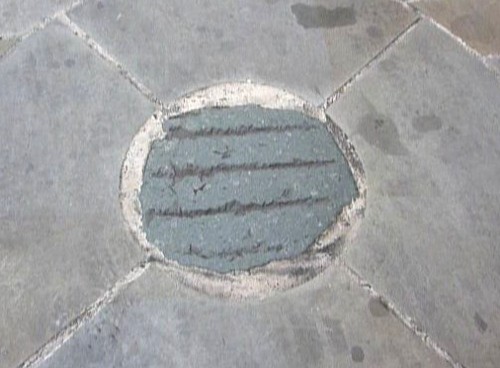 We also admired some of the historic monuments and buildings on our route. The former Adelphi Bank on Castle Street (now Café Nero), as well as having “a base of red granite, surmounted by alternate tiers of red Triassic sandstone and white oolitic limestone” has remarkable bronze doors depicting four pairs of friends or brothers from ancient writings, David and Jonathan (from the Bible), Achilles and Patroclus (from the Iliad), Roland and Oliver (from the Song of Roland) and Castor and Pollux (the twins who sailed with Jason and the Argonauts). 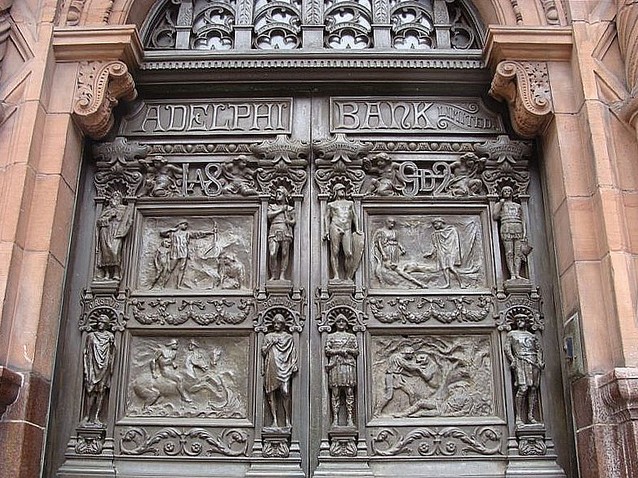 The Nelson monument on Exchange Flags includes an allegorical skeleton representing Death, reaching out from under the victory flags to clutch at Nelson’s heart. (This photo by Torl Portl at Flickr http://www.flickr.com/photos/torlporl/2741342356/) 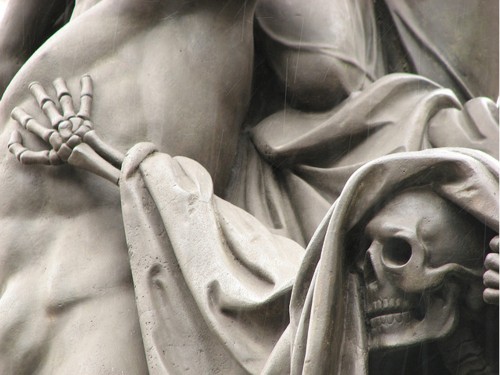 We looked at some great old pubs, too. Thomas Rigby’s on Dale Street is one of two claiming to be Liverpool’s oldest, supposedly founded in 1726. The staff let us in for a look around before opening time, and we went in the Nelson Room, where the great man is said to have had an assignation with Lady Hamilton. The front door and the gargolyles are fantastic. 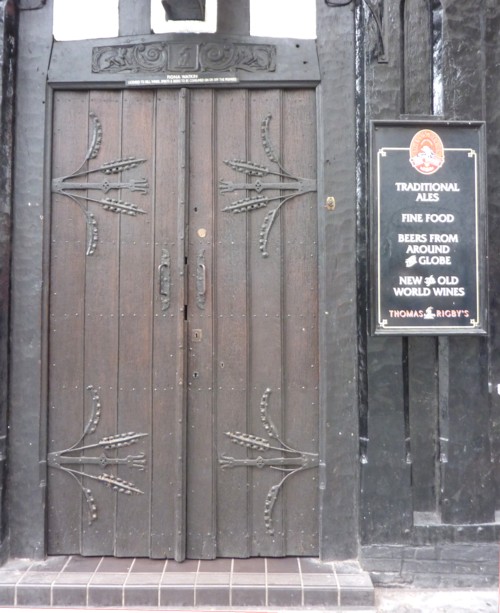 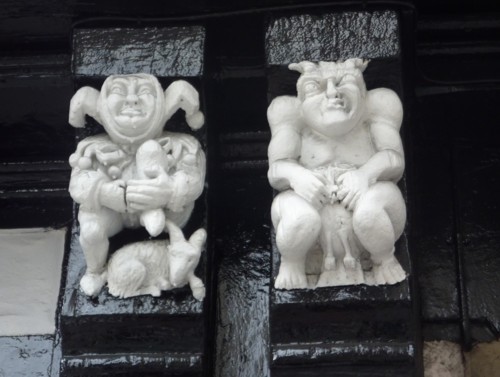 The other claimant to be the oldest pub is just around the corner in Hackins Hey, Ye Hole in Ye Wall. 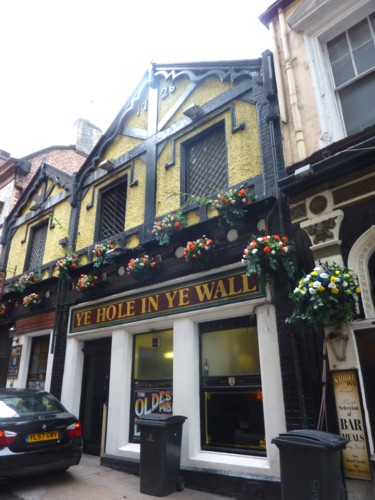 Opposite the pub is a very curious piece of ironwork, bearing the name of William Bennett. There was a man of that name who was a civil engineer from about 1790 to 1825, and one of his early projects was surveying an extension to the Manchester, Bolton and Bury Canal to join the Leeds Liverpool Canal, then being proposed. Is this sign connected to his work? 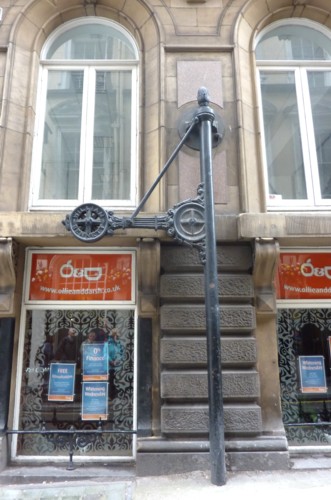 Our last pub was the Lion Tavern on the corner of Moorfields and Tithebarn Street. One of the rooms has a glass cupola with a giant lamp. 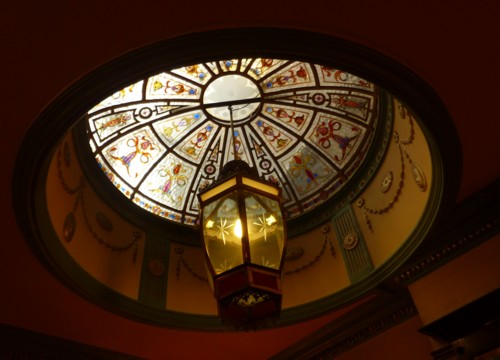 After lunch we walked along Great Howard Street, joined the canal at Stanley Locks and walked to Sandhills. Apart from the usual urban pigeons, the only birds were some Mallards, a Coot, two Canada Geese and a Mute Swan with no apparent leg rings. But the autumn bounty is coming out along the canal verge – rose hips, hawthorn berries and the shiny red fruit of Viburnum, looking like bunches of redcurrants. 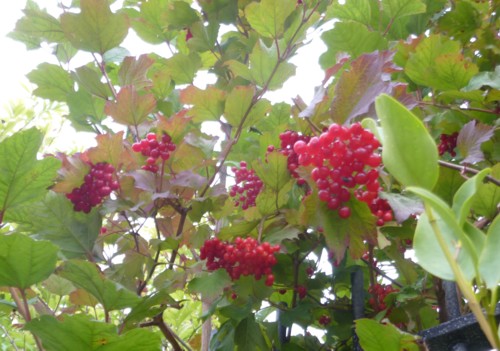