It was yet another dry and sunny day between the rainy weekdays, but with a brisk northerly breeze keeping the temperature down. Starting at Waterloo station, we toured all four of the beachfront gardens, once the private preserve of the wealthy sea captains in their villas, open to the public since the 1930s and now being looked after by a local Friends group. To our delight we found a wonderful display of poppies on the rockery in the southernmost garden, Marine Garden. 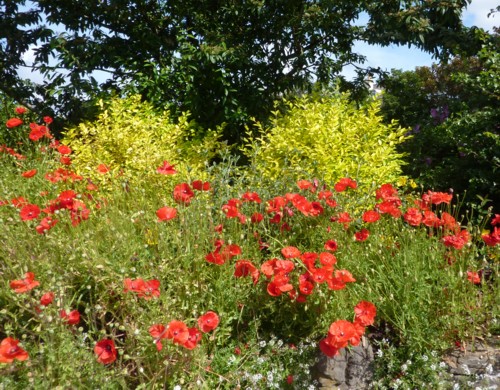 There weren’t many birds about. The usual Wood Pigeons and Blackbird, with Swallows and Swifts overhead. Greenfinches were calling. In the shrubbery in Crescent Garden there was a small colony of House Sparrows, and a small warbler that had us foxed for a minute, until we realised it was probably a Chiffchaff, sitting in the open on the low branches, preening and fluffing itself up. It didnt know the rule for Chiffchaffs  be heard but not seen!  It’s been a very poor summer for butterflies. All we saw was a Small White in Marine Garden. 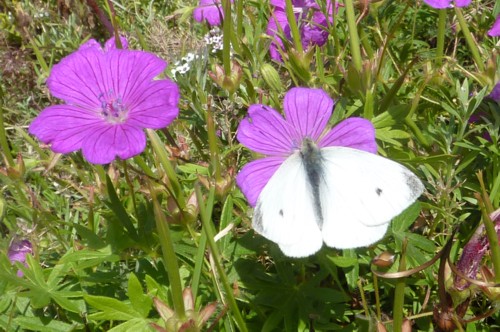 In the weed-choked pond in Beach Lawn Garden there were two Common Newts, but it was hard to see anything else between the green scum. We had our lunch there, keeping out of the wind in the shelter of its north wall. After the recent heavy rain, the path down to the promenade and beach was another pond, looking like it had been there for quite a while. Our goal was to see the two Iron Men who had been dressed in crocheted body suits at the end of May by Polish textile artist Agata Oleksiak, known as Olek .When I photographed them on 4th June they were fresh (left picture), but after six weeks of wind and rain the suits were partially unravelled and rather droopy (right picture). 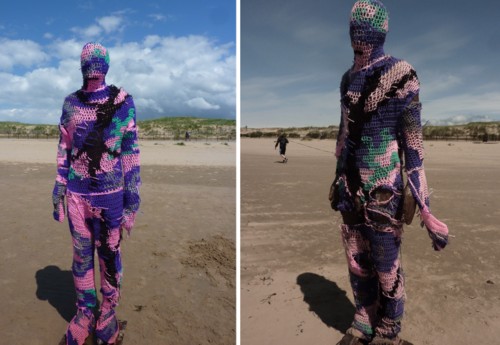 They are both near Crosby Baths. Number 64 is the one with the bright colours, high up the beach, but the one in black and grey (no. 63) is further out and much harder to spot. There is a replica Iron Man inside Crosby Baths, brightly decorated all over with mosaic. Sadly, it is impossible to photograph from the outside, and there is a strict “no photography” rule inside. Despite my signing a form and promising not to photograph any children, the manager wouldnt allow me near it with a camera.

As we made our way north along the beach we spotted a Common Gull in a shallow tidal pool, occasionally snatching something from the water.There were lots of worm casts around, which was probably what it was feeding on. Further along, a Black-headed Gull seemed to have commandeered another small pool for itself. 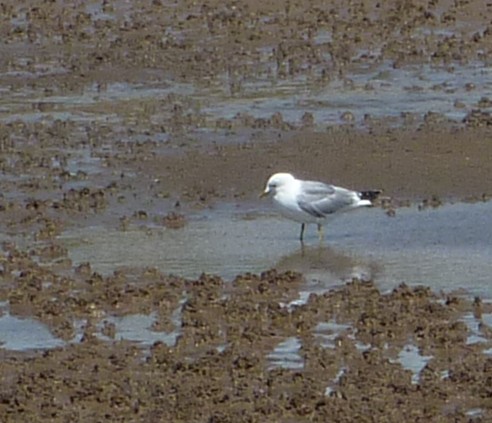 Near the Coast Guard Station two men were making sand sculptures. Here is their version of Edoras, the Golden Hall of Rohan from Lord of the Rings. 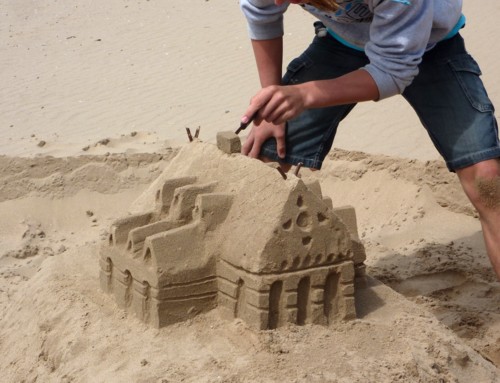