Last Sunday, the 18th June, I assisted Merseyside Biobank who organised a Bioblitz, where various naturalist disciplines meet to record species over a period of twenty four hours. The event was held at Court Hey Park, the home of The National Wildflower Centre.  I agreed to record fungi and lead a foray at the same time. More eyes are most useful. Unfortunately the weather was not kind but eight people joined me and we recorded forty species, a good result for this time of year.

Most notable was Schizophyllum commune (Splitgill) on a fallen Beech trunk. It is found most often in southern Britain but as our climate warms up these species are moving north. Another good find was of an uncommon Bonnet fungus Mycena clavularis at the base of a Yew tree. Kew Herbarium asked me for a specimen but when I went the next day, overnight heavy rain had washed them away.

A separate visit to Calderstones Park in Liverpool produced a large group of twenty five Melanoleuca verrucipes (Warty Cavalier). Last year, a find of only three was sufficiently important to interest Kew Herbarium. This second find and in such quantity could be another sign that our climate is getting warmer. Another unusual find was of Panus conchatus (Lilac Oysterling) on a fallen Beech tree. 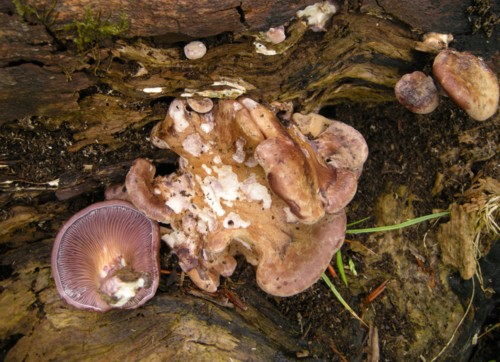